So, what’s the first thing I do with it?

I drop my daughter off at her weekly Brownies meeting and then go grocery shopping, of course. Because I’m out of milk, and real life doesn’t stop when you’re driving a fancy car.

And that, my friends, is the crux of why this car exists to review in the first place. This is the Lamborghini Urus, the long-expected, oft-lamented foray into utility vehicles by one of Italy’s most prized points of automotive pride.

I know, I know. We’re not supposed to be happy when dedicated sports car manufacturers decide to branch out. We’re supposed to scream and cry and gnash our teeth at the injustice of the world, at the idea that there are people who would spend a quarter of a million dollars or more to buy an SUV instead of a piece of low-slung automotive art with a screaming V12.

But if I had the money for a million-dollar garage – and let’s be real, I never will because I write about cars for a living, so I’m clearly speculating here – I think I’d probably want to have two or three fun cars and one of these. Even the very well-to-do have families, after all. While they may be taking their kids to polo lessons instead of Brownies, they still need to move people of varying sizes and abilities around town in everyday ways, ideally in comfort and style. The Urus lets them do just that while adding a pretty stout status symbol to the mix. And it’s putting money into the coffers so that Lamborghini can develop future sports cars.

So, while I was primed to be highly critical of the Urus, I’ve made a conscious decision to get over myself and enjoy it for what it is. And once I did, it didn’t take me long to love the Urus. A lot. 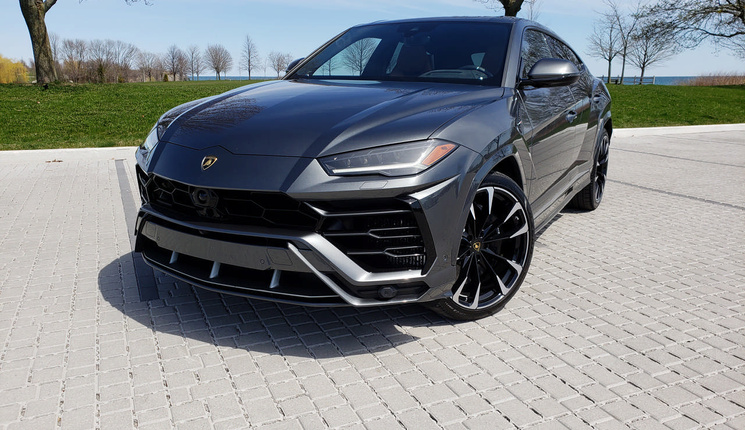 First, a quick history reminder: this isn’t Lamborghini’s first utility vehicle. The LM002 was unleashed on the world in 1986 with the same V12 engine that was used in the Countach. Only 300 units were ever sold, but it created a basis to pull from when drawing up the Urus’s design. Its triangular side air vents and squared-off wheel arches are directly influenced by the LM002, set in combination with some of the marque’s overarching signature design elements such as Y-shaped accent lines and a unified hood and roof angle.

People have their own opinions on whether it all works, but the way I see it, the Urus’s look works far better in person than it does in photos. The distinct angularity of it doesn’t necessarily get interpreted very well by a camera lens. In real life, it’s far more impressive. 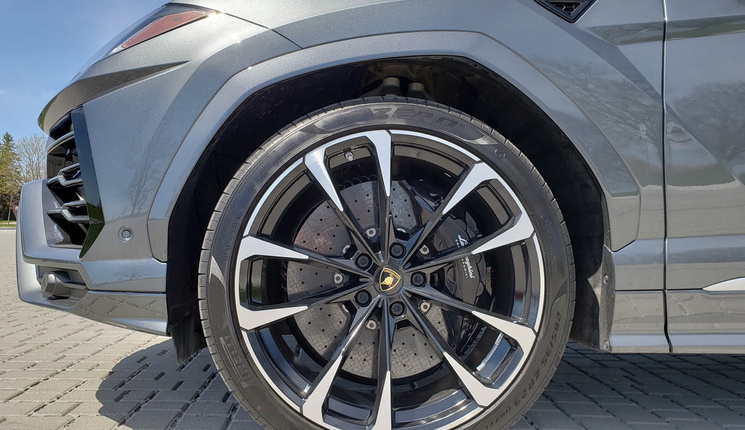 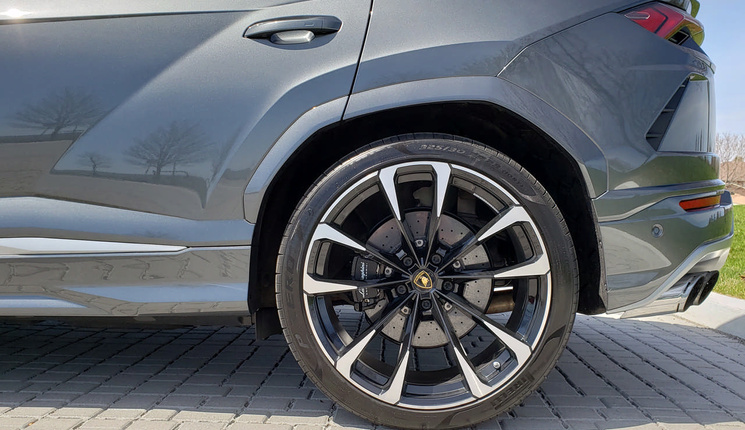 If there was one car out there for everyone, we wouldn’t need car companies and their varying versions of ideal. To that end, the people who are considering spending this much money on a utility vehicle are inevitably going to fall into certain camps.

For example, the sort of person who’s going to love the Urus is one who derives deep appreciation and joy from noticing minute details. There’s a certain elegance in the way that the leather is dappled just so to give it amazing depth of colour, the pattern etched into the pedals is echoed in the speaker covers on the Bang & Olufsen sound system, and the shape in the stitching on the seats and ski pass-through is mirrored in the graphic overlay applied to the open-pore wood on the dashboard. Beauty is in the eye of the beholder – and it would be fair to interpret all of this as being a touch busy visually – but there’s little question that this level of attention imparts a rare premium character.


Another inevitable trait of an Urus buyer is that it will be someone who truly loves to drive. When you’re considering utility vehicles at this price point, you get to play in extremes. The Rolls-Royce Cullinan is another very expensive, very beautiful SUV, but its design is centred more around opulence simply through occupying the vehicle. With the Urus, driving enjoyment is front and centre.

The centrepiece of that experience is Lamborghini’s first-ever turbocharged engine, a 4.0-litre twin-turbocharged V8 that produces 650 horsepower and 627 lb-ft of torque that’s available from 2,250 rpm. Cue the gnashing of teeth again: purists often decry any move toward turbocharging from a sports car brand. When this car was being launched, though, Lamborghini of America COO Alessandro Farmeschi said that this engine is specific to the Urus because its intended use in low-traction environments like sand made it necessary to be able to deliver higher power and torque at low revs. So, rest easy: the remainder of Lamborghini’s line-up appears to be safe from the turbo onslaught for now.

On top of the eight-speed automatic transmission and an all-wheel drive system that can transfer 87 percent of available power to the rear axle and 70 percent to the front, there are some other premium technologies on board such as active torque vectoring that can send 75 percent of power to the left or right on each axle, an air suspension with an 85 mm range, and four-wheel steering with up to three degrees of movement for improved cornering.

This is a road test, not a track test, and so there’s no attempt here to challenge Lamborghini’s claims that the Urus is the world’s fastest SUV with a 0 to 100 km/h time of 3.6 seconds, 0 to 200 km/h of 12.8 seconds, and a top speed of 305 km/h. Rather, I drove this more or less within the limits of the law on some of the best roads that can be found northeast of Toronto (read: roads that are mostly flat and not terribly interesting). 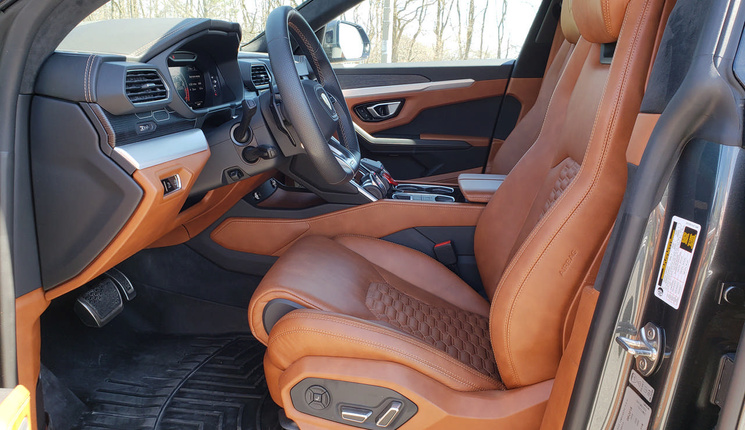 In that context, there are a few things that stand out about the Urus. One is how easy it is to get comfortable. When being handed the keys to a car worth $250,000-plus, it can be hard to kick the tendency to treat it with kid gloves out of fear of damaging it or not being able to rein in its power. That feeling passed for me in this car very quickly. I soon forgot that I was driving a very expensive car, but in a good way, and was quite happy to fling it around the few decent corners I could find and enjoy trying out the added responsiveness of the Sport and Corsa drive modes.

I even took it down a gravel track to try out the differences between Sabbia (sand, for those not versed in Italian) and Terra (dirt) – which are more dramatic than you’d think, by the way, and Sabbia’s heavily muted throttle response could be useful for certain drivers in nasty winter weather. What could have been a terrifying experience was genuinely very enjoyable. It’s also helpful that the digital instrument cluster adjusts automatically with each drive mode to prioritize the information the driver needs at a given time.

You may have seen writers say that certain cars have the effect of shrinking around a driver and feeling smaller, nimbler, and more responsive than they ought to for their size. I’ve never felt that sensation more powerfully before than I did in the Urus. Despite its 201.7 cm width, which is just shy of that of an Aventador, it doesn’t feel unwieldy to maneuver or even to park.

The only thing that’s perhaps left on the table is the sound of the engine, which is moving but certainly not at the level of a naturally aspirated V12. But the cabin is so quiet that you don’t hear a single thing from outside of it most of the time anyway.


Owning a car as a status symbol is one thing, but living with it can sometimes be quite another. In that regard, the Urus delivers some significant positives. An ultra-luxe car maker that doesn't think it's too good for Android Auto? Be still, my beating heart. And if you own an iPhone, you don’t even need to remember your cable: wireless CarPlay is here, and it’s enabled in the Urus. (Or, at least, the car says it is. I’m not an Apple user, so I wasn’t able to test it.)

Smartphones aside, the infotainment screen is nicely laid out and easy to use, including a scrollable list of what’s currently playing on radio stations that’s very readable at a glance (and therefore less distracting). The car’s native functions remain accessible through a stack of digital buttons on the left side of the screen when an app is in use, a detail that’s often overlooked or not executed as well. The same functions are available through the available pair of tablet-style touchscreens mounted for the back seat.

For future updates, however, there are a few things I would change. I found that I was leaning a finger or two on the panel surrounding the top screen frequently, and the material used for this is a rather unpleasant plastic that disrupts the luxury experience. A higher-quality chrome or piano black surround would be a welcome improvement. 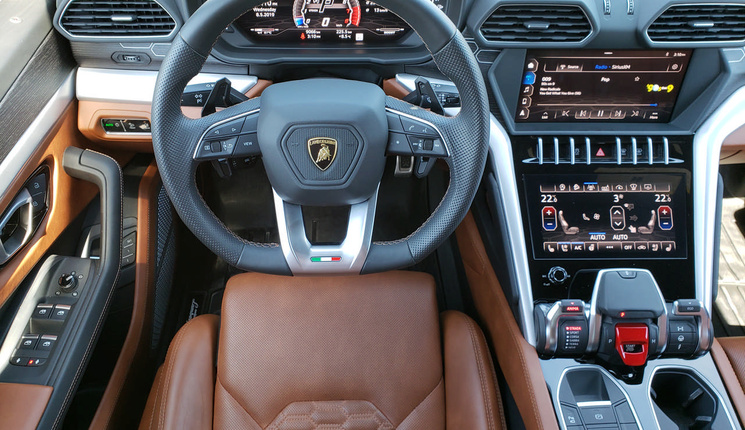 A naturally black material would be nice on the front air intakes as well. The open design of the grille makes the flaking black paint on this tester’s intakes very easy to see from the outside and takes away from the front-end’s premium appearance.

Unlike the infotainment screen, the secondary screen that houses the HVAC controls is far too busy to interpret with ease while in motion and would benefit from some significant simplification.

And having access to so many drive modes is a clear selling point, but it’s a shame that the selector can only go in one direction, meaning that it needs to be pressed five times to go from Sport mode back to the standard Strada mode – and the driver therefore needs to count them off and watch the gauge cluster change to be sure the car has landed on the correct setting. This selector really ought to be able to move in both directions. 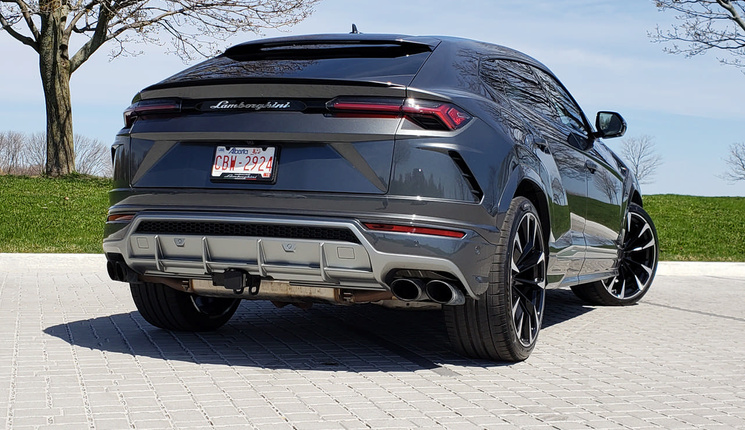 Some people might look at a V8 with 650 hp and think those numbers don’t add up to a Lamborghini level of performance. But to my mind, given how the vast majority of owners are likely to use this vehicle, the engineers have hit upon the balance between power and usability perfectly. Most people who would ever consider owning a Lamborghini Urus would very rarely come anywhere close to the edge of its capability, but as it stands, they’ll surely enjoy pushing it to whatever extent they do.

And as gimmicky as it may be, flipping up that red ignition switch cover to hit start and hear the engine roar never, ever gets old.