Join the Conversation (0)
Once occupying the lower echelon of the Versys roster, the 650 now finds itself coming to terms with middle child syndrome – centering the starting lineup between the Versys-X 300 ABS and range-topping 1000 ABS LT. Revised in 2015, this year saw the addition of the LT package which features KQR hand guards and colour-matched, detachable saddlebags along with the colour availability of my tester - Metallic Matte Covert Green.

Pretty much any motorcycle is a treat to ride on a smooth road under sunny skies, but a bike shows its true colours during inclement weather and challenging conditions. Just as I was about to swing my leg over the middleweight adventurer and the sky began to darken and sprinkle rain, it occurred to me that I had left my wet weather gear at home. “I’m not made of sugar, what’s a little rain?” I thought as I packed my laptop and camera in the 28-litre colour-matched locking and removable saddle bags. Throughout the week, I would discover that they are cavernous enough to hold a full face helmet too – which is always more convenient than lugging it around or rolling the dice by leaving it on the handlebars. The bags are easily mounted and removed from the bike without any unsightly hardware, leaving a clean, seamless look.

The compact 649cc parallel-twin DOHC engine optimized for low-and mid-range torque and high-rpm performance eagerly fires up and is barely audible at idle thanks to the rubber engine mounts and 180-degree crankshaft with balancer shaft.

Adjusting the mirrors, acclimatizing myself to the various controls and slim, upright riding position, I set off in what had become a steady downpour. Testing the brakes at the first few stop signs and lights, I was impressed at the initial bite and then predictable effort required to bring the bike to a standstill. I find it’s always best to know what kind of stopping power you’re working with before you really need to know. 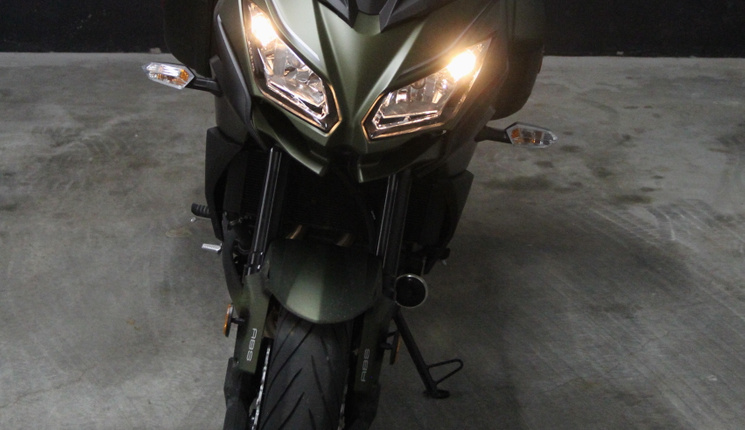 The (manual) 3-way adjustable windscreen and hand guards provided decent protection from both the flow of air and precipitation as I merged onto the highway, easily getting up to the speed of traffic. Power delivery is smooth, responsive, linear and more than ample, particularly without the weight of a passenger or loaded saddlebags in this initial voyage.

These nimble riding characteristics didn’t come about by accident. The design and layout of the crank, transmission shaft, semi-dry sump oil system, muffler with 3-way catalyzer and cassette-style transmission were all developed to optimize space and keep weight low.

Those who ride adventure-inspired bikes are often in search of just that, adventure.

While their wanderlust may take them off the beaten path to exotic or foreign places, my intended destination was simply to get home to downtown Toronto during rush hour in the rain. 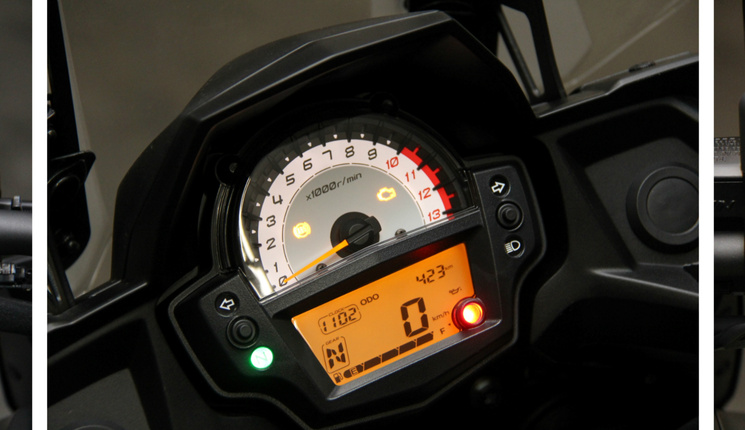 Making things even worse, preparation for the Canadian National Exhibition (CNE) had begun; so frustrated tourists and suburbanites joined the commuters, cabbies and Uber drivers on the congested, pothole-ridden streets. Thankfully these streets were soaked up by the 17-inch wheels and the long travel suspension. The Showa Front Fork separates damping and spring functions into each fork - rebound in the right and preload in the left. The single rear shock has a hydraulic preload adjuster, allowing for tweaking without tools based on riding and weight conditions.

The narrow (and thankfully waterproof) side bag silhouette also helped get through where other larger bikes would have been left behind, idling in the thick summer heat. During the excessive stop and go, both the smooth clutch operation and Positive Neutral Finder were noticed and much appreciated.

The steady rain gave way to a torrential downpour. Not simply hyperbole, the streets were literally flooded as sewers and drainage systems struggled to keep up. Basements were submerged in water and cars were stranded in what looked like an apocalyptic storm. The Versys however, was unfazed.

My initial riding experience may not have been the vision engineers had when they designed the Versys, but its agility, versatility and ease of use was well suited to this kind of journey as I dodged aggressive, erratic and distracted drivers veering into my lane. With a fuel tank of 21L and a comfortable, upright riding position, you could take it much longer and further indeed. 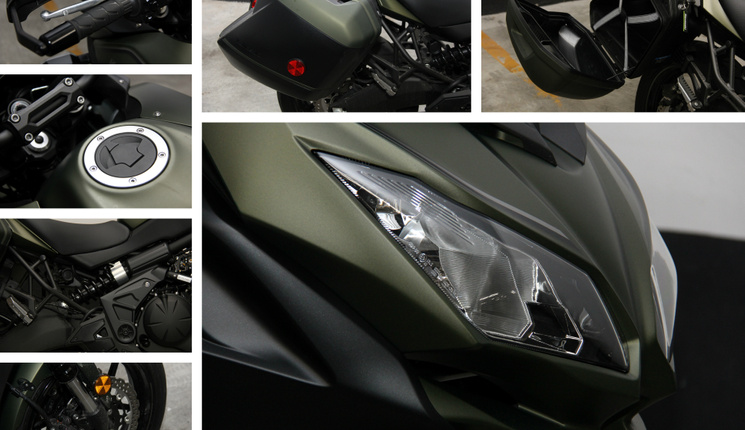 I took the last version on an excursion that led me across varied terrain over 2,000 kilometres comfortably. The list of revisions and refinements to the current model have only served to improve the package. That’s not including the fact that the styling is vastly improved over the previous version.

At a time when everything in our lives is becoming automated and taken over by technology, the Versys is a breath of fresh air by being relatively analog. It does of course feature ABS, but doesn’t complicate things with multiple riding modes, toggles, dials, screens, and menus to navigate. This comes in handy when the task at hand is simply staying upright and alive. The dash is easy to read, featuring a speedometer, RPM and fuel gauges, clock, odometer, and gear selection. What more do you really need?

The nimble and inexpensive Versys-X 300 ABS has received much acclaim since its introduction. The Versys 1000 LT tops off the lineup with a more powerful engine, upgraded suspension and standard ABS. Both are good options. Much like Goldilocks, neither the 300-X nor the 1000 LT would suit my personal needs. At an MSRP of $10,299, the Versys 650 LT, is just right. 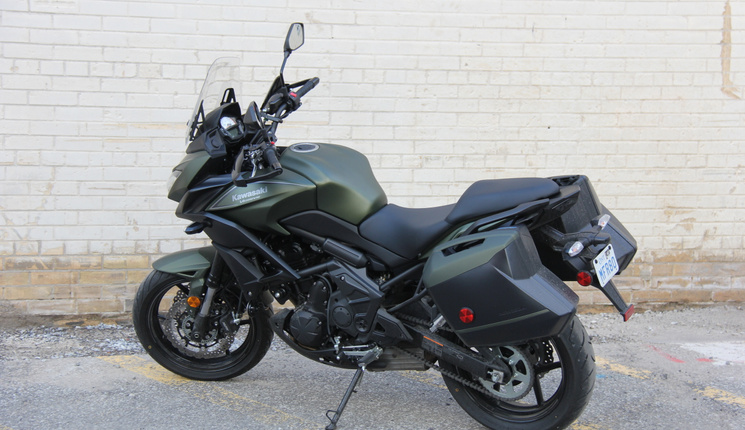