Join the Conversation (0)
Three years ago, it would have been hard to believe that Jaguar, a maker of prestige sedans and sports cars would have two SUVs in its lineup with a third on its way by Summer 2018.

Then again, the same thing was once said about Porsche but the Cayenne and Macan are now cemented as the company’s bestsellers, particularly in North America.

Apparently, company brass at Jaguar’s home base in the British Midlands have fully absorbed the reality that consumers these days really like SUVs.

The numbers, as they say, don’t lie.

It’s a similar story in the U.S., where the F-Pace sold twice as many units as the second-place Jaguar (XE compact sedan) in 2017.

And the trend has doesn’t appear to be slowing down in 2018, as the F-Pace is already doubling the rest of the Jaguar’s sales in Canada through June 30 (1,247). 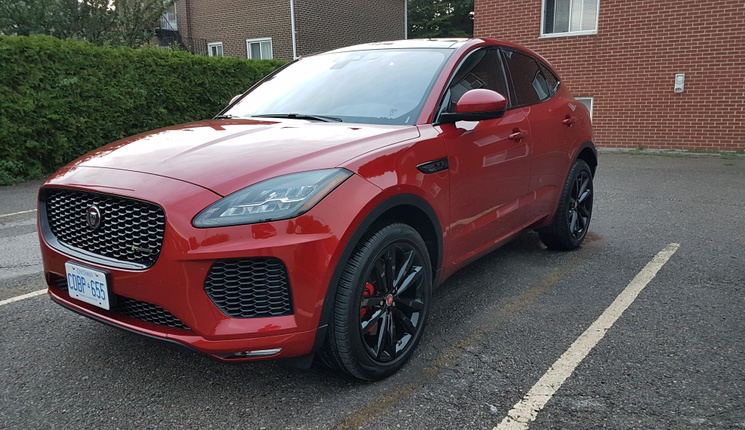 Kidding aside, the compact Jag SUV appears to be catching on. Despite only being on sale since February, the E-Pace is already the third-best selling Jaguar in Canada (303 sold through June 30), and figures to rank a comfortable second to the F-Pace long before year’s end.

As for the E-Pace range in Canada, there are two basic grades – base and R-Dynamic – that range in price from $42,700 to $57,300. Each model also has a packet of trim packages (S, SE, HSE) that offer differing levels of content. A First Edition is also available as a special order.

For this review, Jaguar Land Rover Canada furnished me with a Firenze red R-Dynamic S tester fitted with the P300 engine option (base price $51,000).

The extras make for a pretty sweet ride but, as I say often about options, make sure they don’t upend the value proposition. As nice as this E-Pace is, an outlay of $62,510 before taxes is more than the base price of an F-Pace R-Sport, a vehicle with more room, power and standard equipment. Just something to keep in mind. 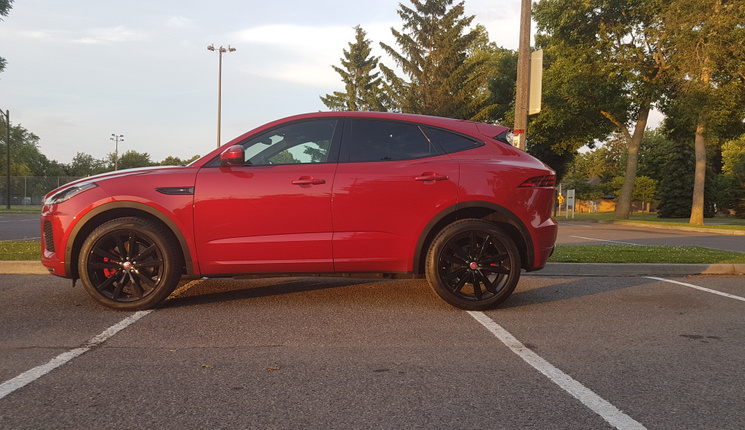 Mechanically, the E-Pace is closely related to the Range Rover Evoque and Land Rover Discovery Sport and is built on the modified version of the JLR D8 platform used by its corporate cousins.

Like other Jaguars of late, the E-Pace’s construction features a lot of aluminum and ultra high-strength steel to create a stiffer structure and shed weight. Several body panels are aluminum, including the hood (10 kg lighter than steel), front fenders (3 kg lighter) and tailgate (15 kg lighter).

Elsewhere, the cross member behind the dashboard is a lightweight magnesium casting which Jaguar claims results in tighter tolerances (better fit and finish) for the car’s interior trim panels.

Dimensionally, the E-Pace is slightly longer (25 mm), taller (5 mm) and narrower (3 mm) than an Evoque and rides on a longer wheelbase (21 mm), but it is significantly smaller than the Discovery Sport. For example, the Discovery Sport is 194 mm longer and 173 mm wider.

Interestingly, despite its ties to the Evoque and Discovery Sport, the E-Pace isn’t built alongside them at Jaguar’s Halewood plant near Liverpool, but it is instead assembled by contract manufacturer Magna Steyr in Graz, Austria. The company is also building Jaguar’s next SUV, the pure electric i-Pace (due in September). 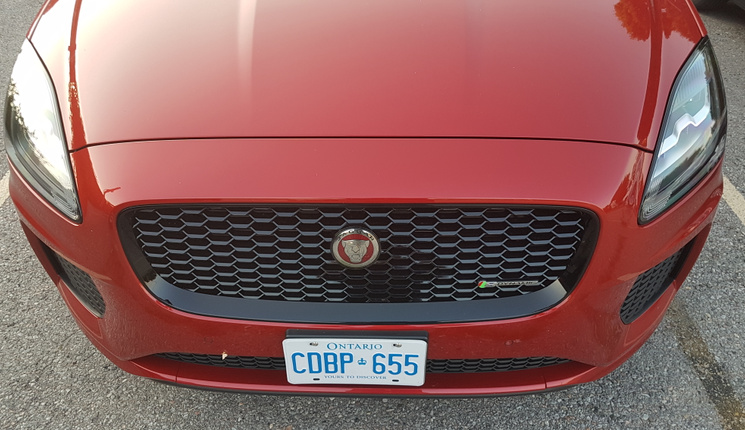 From a design standpoint, the E-Pace shares a family resemblance with the F-Pace, but not to the point that the former is simply a downsized clone of the latter.

The E-Pace’s grille looks a lot like that of its larger sibling, but it wears a different fascia with unique air intakes and its headlights look nothing like those on the F-Pace. The squarish shape of the LEDs combined with other front-end elements are a reminder of the vehicle’s smaller proportions. The F-Pace is quite a bit larger by comparison, as it should be.

In the looks department, the exterior of the E-Pace gets high marks, bearing in mind that it’s still a two-box SUV design. There’s only so much innovating a designer can do with such a template. However, E-Pace’s lines are clean and exude a sense of power and refinement without giving the impression that Jaguar design chief Ian Callum simply re-sketched a smaller F-Pace – the E-Pace does feel like its own thing.

That said, the upward sweep at the rear haunches that wrap into a liftgate with a small window and slim-notch LED taillights will look familiar to F-Pace owners.

On the inside, Jaguar family sensibilities are in evidence everywhere you look, from the thick hub steering wheel, to the round climate control knobs and pistol-grip gear shifter. Even the passenger-side grab handle on the centre console invokes a sense of déjà vu.

Overall, it’s an aesthetic that feels very much in keeping with the Jaguar brand, which is crucial for luxury carmakers. Those that buy a Jag want it to look and feel like a Jag, and the E-Pace checks that box. 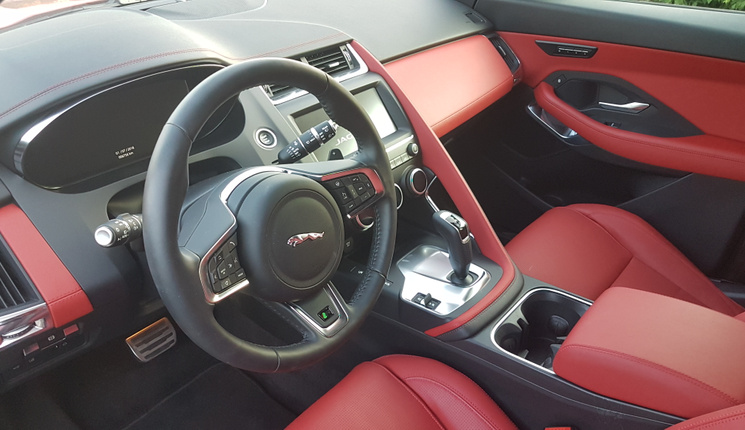 While the E-Pace might not look especially fast, it’s quicker than it looks.

If you keep the transmission in sport with dynamic mode engaged, and drive with a heavy foot, the Ingenium 2.0-litre turbo will leave plenty of vehicles in its wake, and not just SUVs. According to Jaguar, the E-Pace needs just 6.4 seconds to go from 0-100 km/h and has a top speed of 243 km/h.

The E-Pace offers impressive handling for an SUV, and Jaguar has done a good job of tuning out a fair amount of road and wind noise. As far as the ride is concerned, it wasn’t too teeth-chattering on smoother roads, but bigger wheels and low-profile summer tires aren’t designed for comfort. They’re there for better grip and handling, but on rough roads you’re going to feel the bumps. The standard 18-inch wheels and less aggressive rubber on the R-Dynamic S would be the better choice if a more comfortable ride is an important purchase consideration.

The cabin is handsomely designed and well-finished, the leather seats are comfortable, and everything works with a minimal amount of fuss.

As far as room and versatility are concerned, the cabin felt a bit tight. The front seat area is reasonably spacious, but the back seats don’t offer a great deal of headroom and putting three average-sized adults back there for long periods of time isn’t ideal.

In terms of versatility, the E-Pace offers up to 1,493 litres of cargo space with the rear seatbacks folded, which is a decent amount of room for a compact SUV.

Overall, the E-Pace offers an impressive degree of style, comfort and content for the money. It’s fast if you want it to be, but its best attributes are those that make SUVs such big sellers: ride, comfort and versatility. The back-seat area is a bit tight and rearward visibility isn’t great, but these aren’t deal-breakers.

It’s still early days for the E-Pace, but it appears well-positioned to take advantage of the growing popularity of small and medium-sized SUVs in Canada. 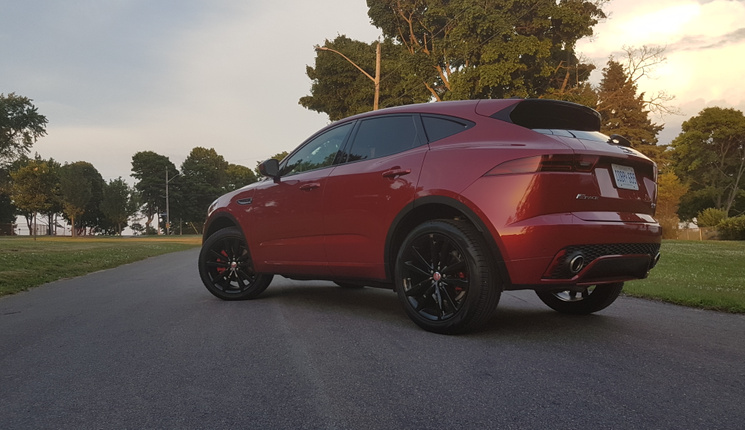