Preview: 2017 Ford Fusion keeps its good looks, gets better under the hood

Join the Conversation (1)
MALIBU, Calif. — Despite the trend toward SUVs and crossovers, many drivers still prefer sedans.

And choice. Especially in the mid-size segment, there are about a dozen worthy entries.

Significant upgrades to the 2017 Ford Fusion will make that choice even harder.

Ford says “design” is the top reason for purchase among Fusion owners, so the company didn’t mess much with this. The Aston Martin-like grille is now enhanced with more aggressive front-end sheet metal, while upper trim levels get LED headlights which give a touch of jewel-like bling.

Perhaps the most surprising detail is the rotary shift knob, seemingly lifted directly from Jaguar — which Ford of course used to own. This helps free up space in the centre console for phone storage, a Volvo-like bin under the console, revised cup holders, and charging points, both 12 volt and USB. Did I mention Ford used to own Aston Martin and Volvo too?

Push-button start is now standard across the range so everybody can lose their keys down between the seats or fly across the ocean with the key so your wife can’t restart the car. Don’t ask.

A new range-topping Platinum model offers the dreaded leather upholstery which many people unfathomably seem to like (too cold in winter, too hot in summer, too slippery all the time). Ford says the Fusion’s leather is equal to some of the high-end British luxury cars. You’re welcome to it. 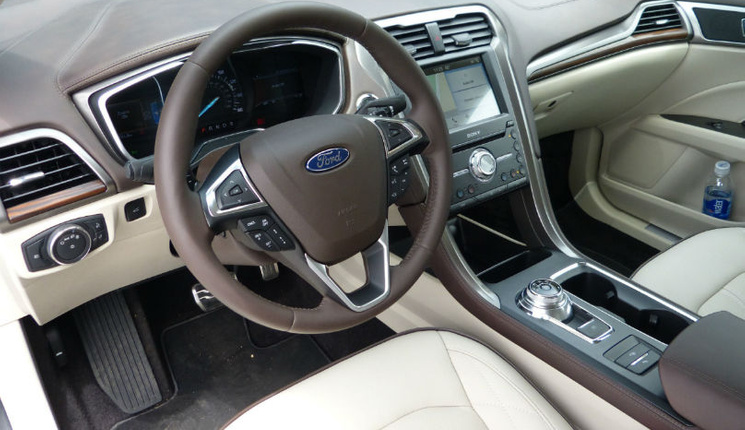 Did I mention choice? No fewer than five powertrains are now available. The 2.5-litre four is standard on the base S trim level. The SE gets a 1.5-litre turbocharged (EcoBoost, in Ford-speak) four, while Titanium and Platinum models get a 2.0-litre EcoBoost four.

Coming later this year is a Sport model, with a mighty 325 horsepower 2.7-litre EcoBoost V6 and continuously-controlled suspension damping. More on that model when we’ve driven it…

Two hybrids, with or without plug-in capability, are also on offer. They will be available across all trim levels, except Sport. The hybrids offer about 30 km of electric-only driving at speeds up to 135 km/h, with total range in the 800 km range. Almost as good as my Volkswagen TDI. 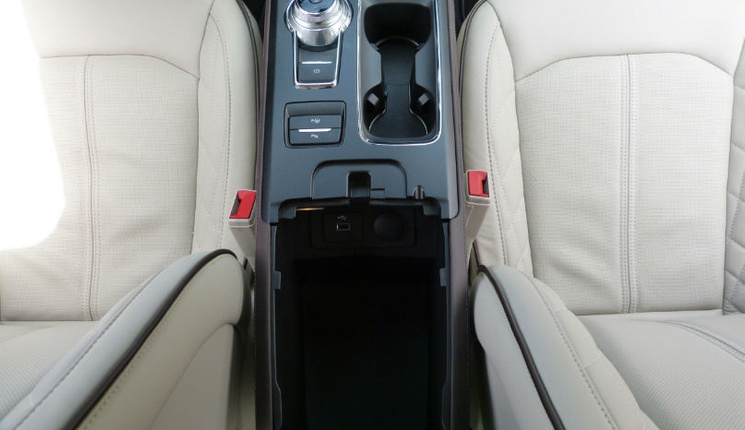 Idle stop-start technology is standard on most powertrains to save fuel and reduce pollution in heavy traffic conditions. Ford’s is one of the fastest-operating and smoothest such systems out there.

A whole range of driver assistance systems are available. Blind spot warning, lane keeping, cross-traffic alert, pedestrian detection, collision avoidance with automatic braking, automatic high-beam dipping, etc. Or y’know, you could just learn to drive, but who has time for that?

Among the truly useful technologies is smart cruise control with stop-and-go. It slows and stops your car in response to the vehicle in front, and restarts it when the other guy starts moving again. 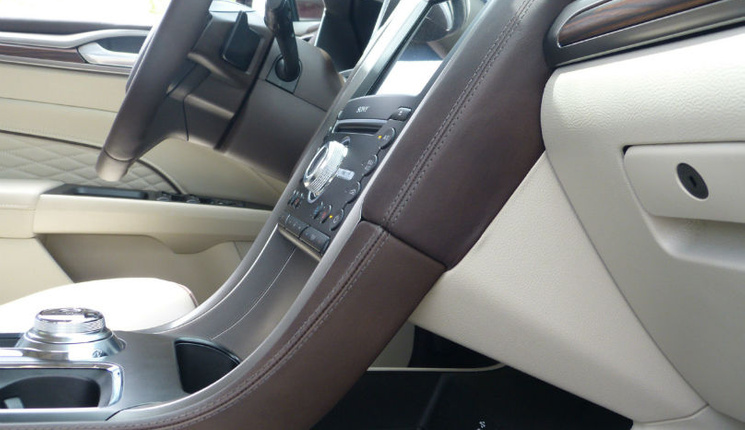 Ford was early to the “self-parking” party, and the Fusion now offers perpendicular parking assist as well as parallel assist.

In my experience, people who have this use it once to show off to their friends, then never use it again. Seems to me you should get maybe five shots at this. If you use it more than that, your licence should be automatically suspended. If you can’t park your car, it’s time for Uber.

Ford was also early to adopt screen-based controls. The original Sync system was so awful it almost killed the concept before it got started.


There’s even a round knob for the volume! Not for station tuning — that’s still inexplicably a rocker switch — so there’s still room for improvement.

The canyon roads around Malibu north of Los Angeles provide an excellent venue for testing a vehicle. Lots of twisties, bits of town driving, and Highway 101 for, well, highway driving.

The Fusion is based on the European Ford Mondeo. Europeans are much fussier about vehicle dynamics than we are — those unlimited speed Autobahns, dontcha know — and Ford has generally done an excellent job at equipping even their family cars with capable suspension, notably great steering.

Even drivers who wouldn’t know a good-handling car if it ran over their foot can feel added confidence in a vehicle like this.

Our first mount was the one-up-from-base SE, which will be the sales volume leader. Even this low-level car with 17-inch wheels and the 1.5-litre EcoBoost turbo four offered excellent steering feedback and precision, with decent overall grip and good ride.

The 181 horsepower engine wasn’t unduly noisy even when pressed, and while it’s no ball of fire in the acceleration department, it was smooth and linear.

Next up, the range-topping Platinum four-wheel drive model with 19-inch wheels and the 245 horse 2.0-litre EcoBoost four, was predictably even better, bordering on downright quick off the line, with even crisper handling.

In both cars the six-speed automatic shifted well on its own, or via steering wheel paddles, rare at this price point.

One loop in the non-plug-in hybrid showed significant progress in this model’s driveability. The older hybrid’s gas engine sounded like a washing machine full of walnuts when it fired up. The new one is much quieter, and its engagement much smoother.

Regenerative braking, which of course is the whole point of a hybrid, is also much more linear and smoother than in any hybrid I have tried, notably the Toyota Camry hybrid Ford provided for back-to-back comparison.

As long as there are some of us who enjoy driving, there will be a market for a car like this. 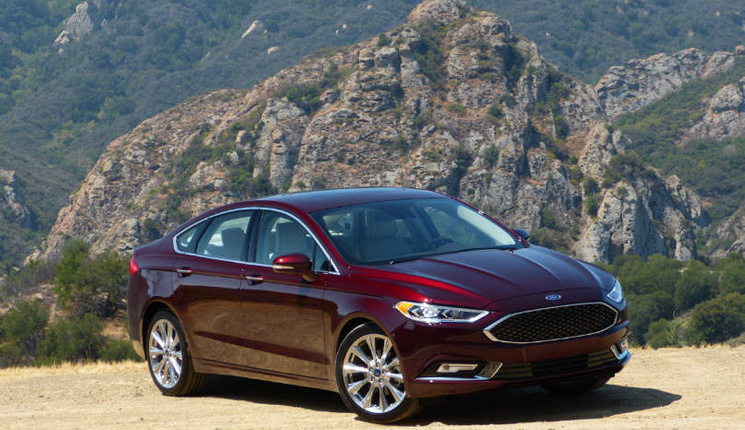 Freelance writer Jim Kenzie is a regular contributor to Toronto Star Wheels. For this story, his travel and other expenses were paid by the manufacturer. To reach him, email wheels@thestar.ca and put his name in the subject line.