First Drive: A 2017 Nissan Micra, one of the lowest priced cars in Canada, starting at just $9,988 looking quite at home at 47th and Broadway in Manhattan for a MICRAscope promotional drive before NYIAS.

Join the Conversation (0)
NEW YORK, NY: “Hey! Where can I get one of those?” a guy in a pickup yelled out.

We were stuck in traffic, surrounded and overshadowed by trucks and SUVs on a New York highway into Manhattan.

“You can’t,” I yelled back, and then explained why, doing so as politely as possible. Because you never know what an American might be packin’ in his glovebox. 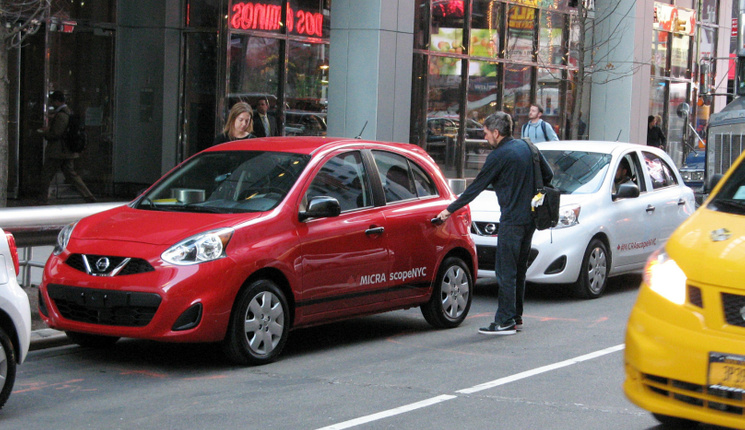 Although the Micra is a truly global product, selling in 160 countries, it is available only to Canadians on the North American continent, where it fits in well with our more frugal tendencies and our easier acceptance of smaller, hatchback vehicles.

Americans? Not so much, with their mercurial tastes tending to bob up and down with fuel prices, currently ranging between (US) $2.00-$3.00/gal across the country.

On a recent drive to Cleveland, the math on a fill-up translated to a paltry (CDN) $0.69 per litre. Which, I guess, explains why Nissan’s marketing poobahs passed over any mild American interest in this subcompact. 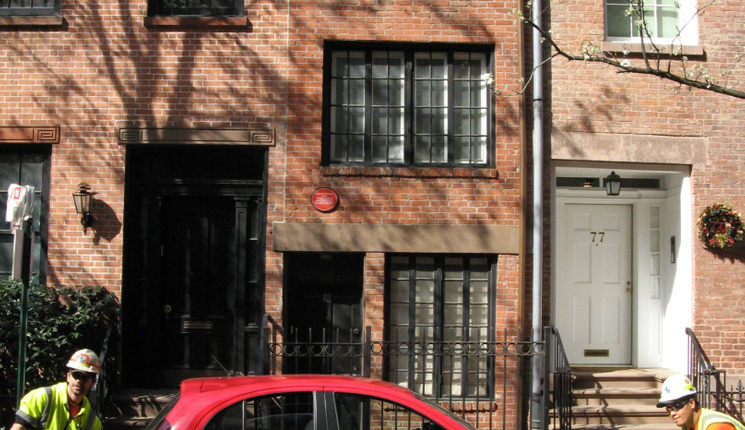 But, just for fun, Nissan Canada kicked off attendance of Canadian automotive journalists at the 2017 New York International Auto Show (NYIAS) with a day-long parade around the Big Apple in Canadian Micras, under the program moniker - “Manhattan under a MICRAscope”.

In keeping with our “think small” theme, we visited New York’s smallest museum, a miniature Statue of Liberty and took pictures of the Micra in front of the city’s smallest house (nine-feet, six-inches wide).

Micra prices range from $9,988-$17,188, and we rotated through varying models of “the cheapest car in Canada”, from the starting S MT trim with crank handle windows to bulk-selling, air conditioned, mid-level SV models and further pimped-out, sportier SR versions. 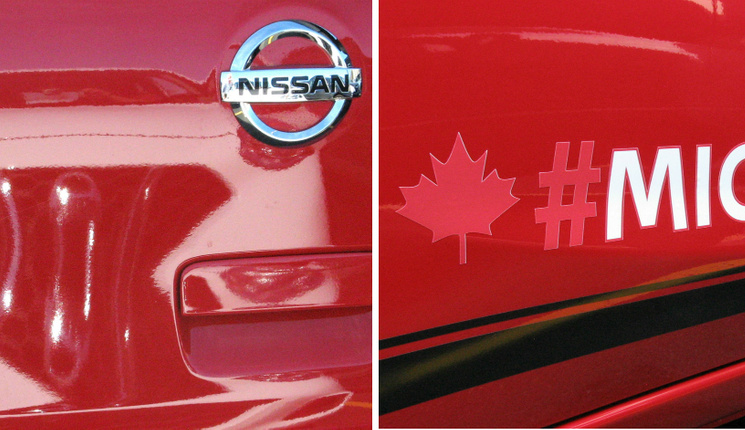 While not exactly thumbing our noses at the Yanks, threading our way through the backstreets was a pretty good demonstration of why these small, nimble, easy-to-park and easily affordable subcompacts are so well suited for the cut-and-thrust of downtown driving.

Ten Cars America did not get


Under the hood, a 1.6-litre four-banger makes 109 hp and 107 lb/ft of torque, not a rating to put you in a swoon, but the little car has a decent power-to-weight ratio.

The engine feels surprisingly peppy, utilizing Continuously Variable Timing Control (CVTC) and dual fuel injection with smaller nozzles that produce a 57 per cent finer spray than single nozzle injectors. Fuel econ is rated at a thrifty 8.6/6.6L/100km (city/hwy), through a base five-speed manual or optional four-speed automatic (about $1,000 extra, more in the S model because of included goodies - A/C, etc). 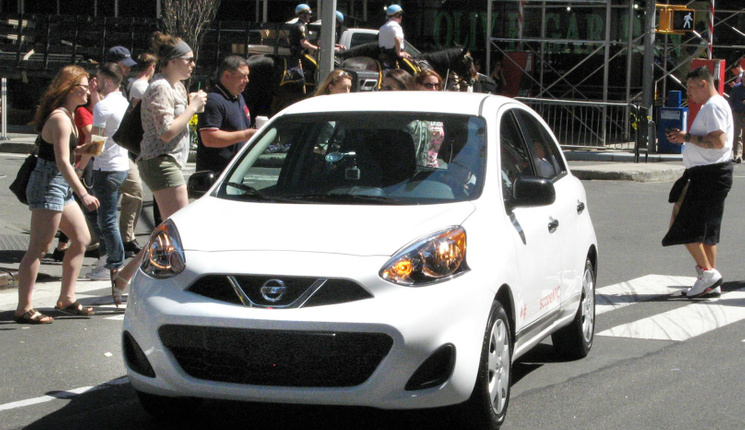 Also Read: Yaris deserves to be on the radar


Add in wheels-to-the-corner architecture and a few made-for-Canada enhancements and you have a nimble little, well, almost pocket-rocket.

Those Canadian-tailored enhancements include steering and suspension tweaks based on testing in Quebec, even taking into account the way roads are crowned in Canada.

Additional front and rear sway bars tighten the ride and the turning circle was reduced to 4.6 metres. Heated mirrors and rear heater ducts were added for Canadian winters. The rear seat was shifted to a 60/40 folding configuration so that, yes, you can fit your hockey bag and sticks in the back of the car. 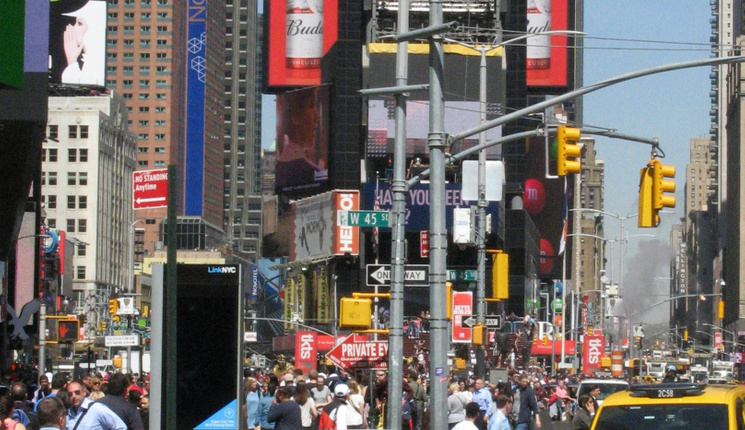 And while many countries start their Micras with base 14-inch wheels, Canadian models offer 15- or 16-inch wheels to accommodate more widely accessible winter tire sizes.

All of that content is wrapped up in bodywork that the company bumpf boasts about as “expressive and aerodynamic”, citing the V-grille and other familial styling cues.

I’m more inclined to see it as kind of Goby-eyed and goofy-looking up front, slightly Fiat 500-ish in back, but endearing nonetheless with the kind of oddball, ugly duckling appeal that many small cars engender.

Nissan Canada was also smart enough to launch the Micra Cup series along with the car. That “most affordable race series in Canada” has gone a long way in shining a spotlight on the Micra’s can-do capabilities and perky persona.

And, while we weren’t exactly racing through Manhattan, we certainly created a small stir in our small cars, instigating questions and comments.

One final aside - those of you in the know have probably heard about the launch of a new, sleeker, sexier, techier Euro subcompact badged as, you guessed it, the Nissan Micra. 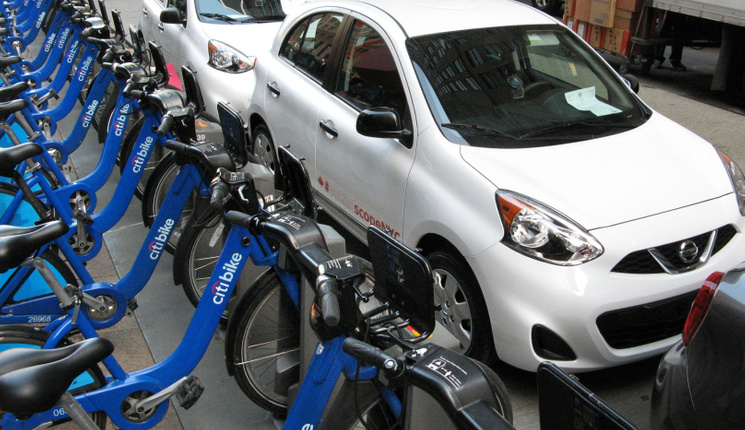 Much as the global head office guys could do with a sharp rap in the forehead for confusion created by that boner, the Nissan Canada crew was quick to explain that many countries, including Canada, will be sticking with the original Micra.

The new upgraded Euro version would be significantly costlier and Nissan is loath to lose its entry-level pricing advantage.

You can’t blame them for wanting to stick with a Micra that, as they say, blends Japanese quality, a little European styling and a whole lot of value in Canada.

Along with a bit of fun in New York City. 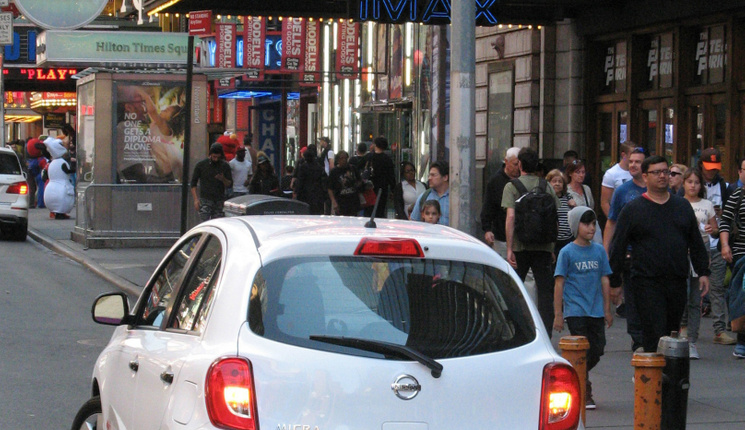