My week with the Mazda6 convinced me this vehicle is one that deserves to be in the conversation when pondering a family sedan.

Join the Conversation (0)
Every once in a while you get the behind the wheel of a car and think to yourself, ‘they got this right!’

I had that thought as I was driving home from Mazda with my latest tester, the 2017 Mazda6.

It’s a four-door sedan that does just about everything right. It looks good on the inside and outside and features all the safety devices Canadian drivers are asking for.

My tester for the week was the Mazda GT, which featured a six-speed manual transmission. 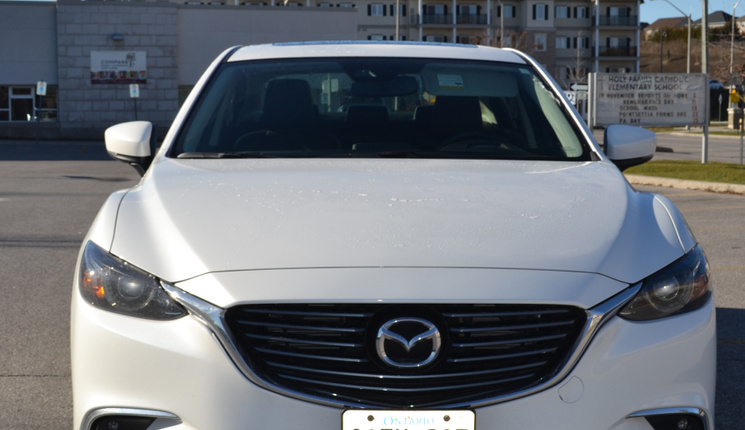 The 2017 Mazda6 is a strong presence in the four-door sedan market.[/caption]

I’ll venture more than 90 per cent of vehicles sold in Canada feature an automatic transmission but there is just something about a manual transmission that gives you better control of the car.

Today’s cars that feature shifter paddles on steering wheels as an option are a pale comparison to the real deal.

Maybe it’s the clutch or that feeling when you pull the shifter into fourth, or fifth gear, but driving a stick just makes you smile more when you are behind the wheel.


And today’s manual transmissions have come a long way since I was first introduced to them in the 80’s. A lot smoother, many now help you by indicating when you should switch into the next gear. 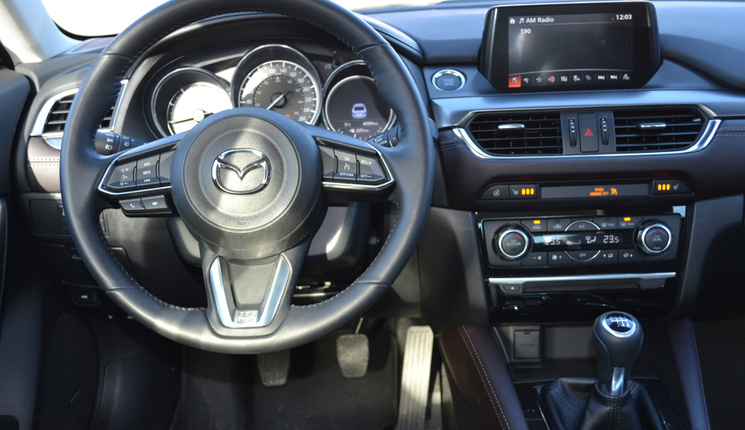 The interior of the 2017 Mazda6 GT is one of the nicest in the family sedan segment.[/caption]

I’ve read a lot about how many auto drivers feel the engine is becoming dated on the Mazda but I found it to be nimble and provide the power I needed whether driving in the city or on the highway.

Having the manual transmission did keep me from trying out the technology package Mazda offers on the GT version of the Mazda6. That package offers a number of safety supports such as smart brake support, forward obstruction warning, distance recognition, lane-keep assist and lane departure warning. 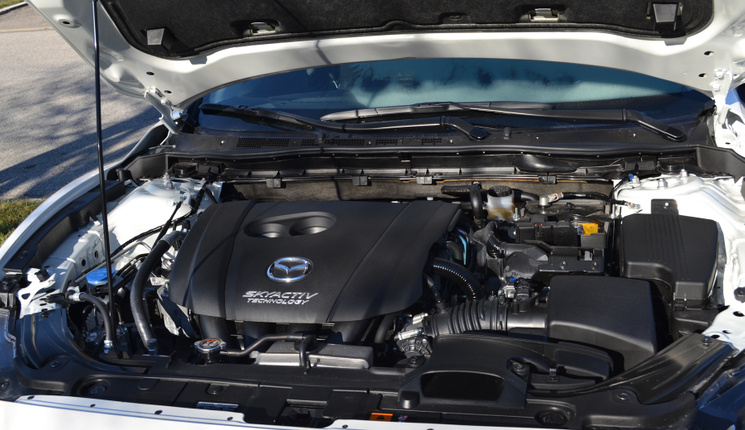 The 2017 Mazda6 GT is powered by a 2.5 litre inline four-cylinder engine with 184 hp and 185 lb/ft of torque driving the front wheels through either a six-speed manual or six-speed automatic transmission.[/caption]

But the manual transmission didn’t get in the way of trying out Mazda’s G-Vectoring Control, standard on all three versions of this sedan.

Mazda has always been obsessed with getting just the right feel between car and driver. The company calls it, Jinba-Ittai, a feeling of unity between driver and vehicle. You see it in the company’s commercial and in the 2017 Mazda you feel it with G-Vectoring Control.

When the driver starts to turn the steering wheel, GVC controls engine drive torque to generate a deceleration G-force, shifting load to the front wheels.

As the driver continues the turn, the engine drive torque is transferred to the rear wheels, which enhances vehicle stability.

In layman’s terms it means your body will remain straighter in the seat while making a turn while you won’t have to make steering corrections while in a turn. It’s also meant to help keep control of your vehicle in rain, snow or on poor road surfaces.


Living in Bowmanville, our town has added a number of roundabouts. Before reading up on the GVC I thought I was just doing a better job of going through the roundabouts in the Mazda6. 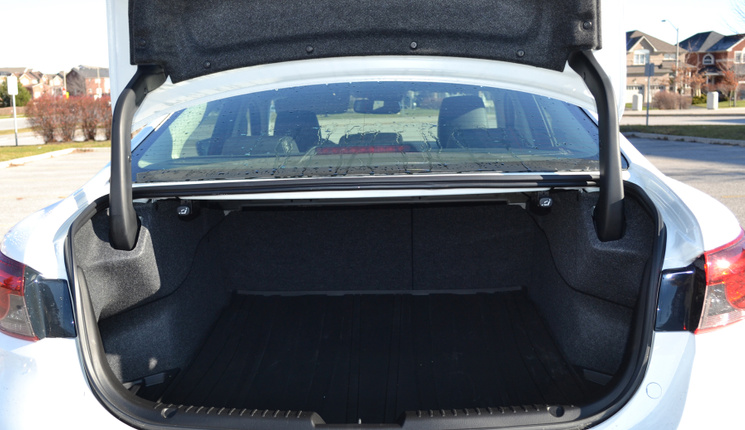 There aren’t too many things you couldn’t fit into the trunk of the 2017 Mazda6 GT which has 419 litres of cargo space.[/caption]

That feature had the speed limit appear on the active driving display which pops up just beyond the steering wheel for the driver when the car is on. I frankly found it a little annoying and turned it off after my first day in the car.

The interior of the Mazda6 is just what you would expect from a car company that wants you to feel one with the car. Everything is in its proper place, within easy reach of the driver. The dash isn’t too complicated and the steering wheel controls are not overwhelming. 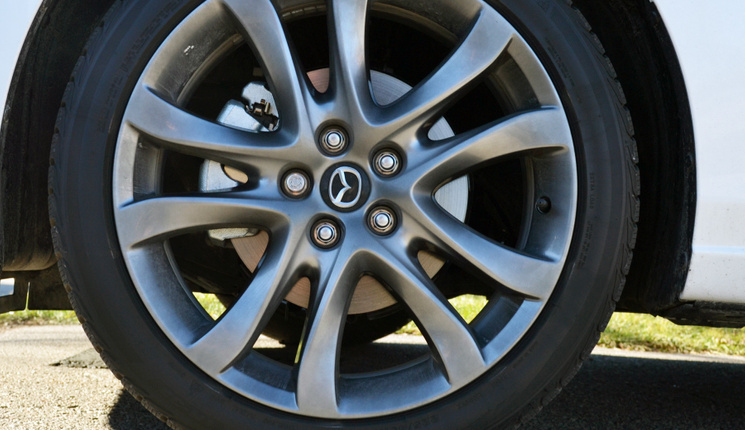 This four-door sedan has plenty of room for three adults in the back seat and I can’t think of many things that would not fit in the massive trunk that has 419 litres of cargo space.

While the four-door sedan market in Canada features a lot of stiff competition from the Honda Accord to the Toyota Camry, my week with the Mazda6 convinced me this vehicle is one that deserves to be in the conversation when pondering a family sedan. 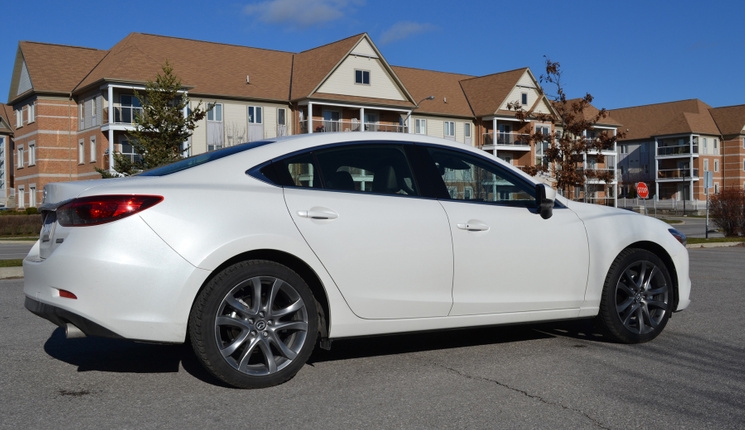 This shot from the side shows the aerodynamic shape that illustrates Mazda’s Kodo design language.[/caption]