Hyundai Ioniq has an Easy Elegance

It’s a handsome, well-designed car, built from high-quality materials, and is nicely finished inside.

Join the Conversation (0)
Are the Hyundai Ioniq Hybrid and fully electric models good enough to change my mind about electric cars?

Nope. Science doesn’t lie. And neither do I.

I have always said that under very limited circumstances — high mileage, mostly in the city — both hybrids and electrics can make some sense.

But the favourable conditions for both are limited, indeed.

Both alternately powered Hyundais are on sale now, the hybrid starting at $24,299, the battery-powered electric at $35,649. The latter does not include the rebates that the Ontario government is giving purchasers of electric cars.

Exactly comparably equipped Elantra models don’t exist to which we might compare these prices. The base Elantra starts at $15,999, but isn’t as fully equipped as the Ioniq.

Probably safe to say the hybrid costs about five grand more than an Elantra, give or take, the electric some 15 grand more. Less your and my tax dollar contributions, of course.

The Ioniq is roughly based on the Elantra sedan, with the same wheelbase and much the same suspension and understructure.

Ioniq is a four-door hatchback with a fastback-like profile, to distinguish it from the fastback-albeit-trunked Elantra sedan and the “squareback” Elantra GT.

It is a handsome, well-designed car, built from apparently high-quality materials, and is nicely finished inside. You can get rear heated seats, and there is a trunk lid pull-down grab handle.

There’s decent room for four, five in a pinch, and the hatch opens wide to a good-sized cargo area which swallows 750 litres of stuff (650 for the electric, whose batteries and other gubbins steal some of that space). The rear seatbacks fold flat in a one-third/two-thirds split.

The fully electric model produces a modest 118 horsepower and a more robust 218 pound-feet of torque. It promises 200 kilometres of range; when plugged in to a 110-volt outlet at my house, it actually registered a maximum of 220 km, taking some 24 hours or so to reach that level. (Interesting that when plugged in to a perfectly functioning exterior socket on my garage, it wouldn’t charge at all.)

Also Read: What’s the True Cost of Owning a Hybrid?


When I drove off, the range immediately dropped to 216, then clicked back up to 218! Guess it takes a while to figure itself out. But overall, it didn’t lie.

Driving the electric is simplicity itself. Push a button on the centre console that reads ‘D,’ push the ‘accelerator,’ and off you go. Like most, if not all, electrics, there is no transmission as such — just direct drive.

Acceleration is decent off the line — electric motors develop their peak torque at zero r.p.m. — and the car can keep up in the cut-and-thrust of city driving, which will surely constitute the vast majority of this car’s usage. That said, chances are you won’t be engaging in many stoplight grand prix.

You can select from ‘ECO,’ ‘NORMAL’ or ‘SPORT’ driving modes, but there was little-to-no noticeable difference in performance. There were occasional whirs and gurgles from the electric motor, but these were probably more noticeable because, overall, the Ioniq electric is very quiet.

Because there’s no engine noise to mask it, you are more aware than you normally would be of road noise, and the ultraefficient Michelin ‘Energy Saver’ tires howled in protest at any cornering speed much above a walking pace. The grip from said tires? Notable largely by its absence. I would not want these tires on during the winter months. Actually, never.

Visibility to the rear is compromised somewhat by a horizontal bar that separates the main rear window with a smaller vertical glass panel. Depending on where a following car is, it could be largely hidden by this bar; the Ioniq would be safer with a fully transparent rear panel. 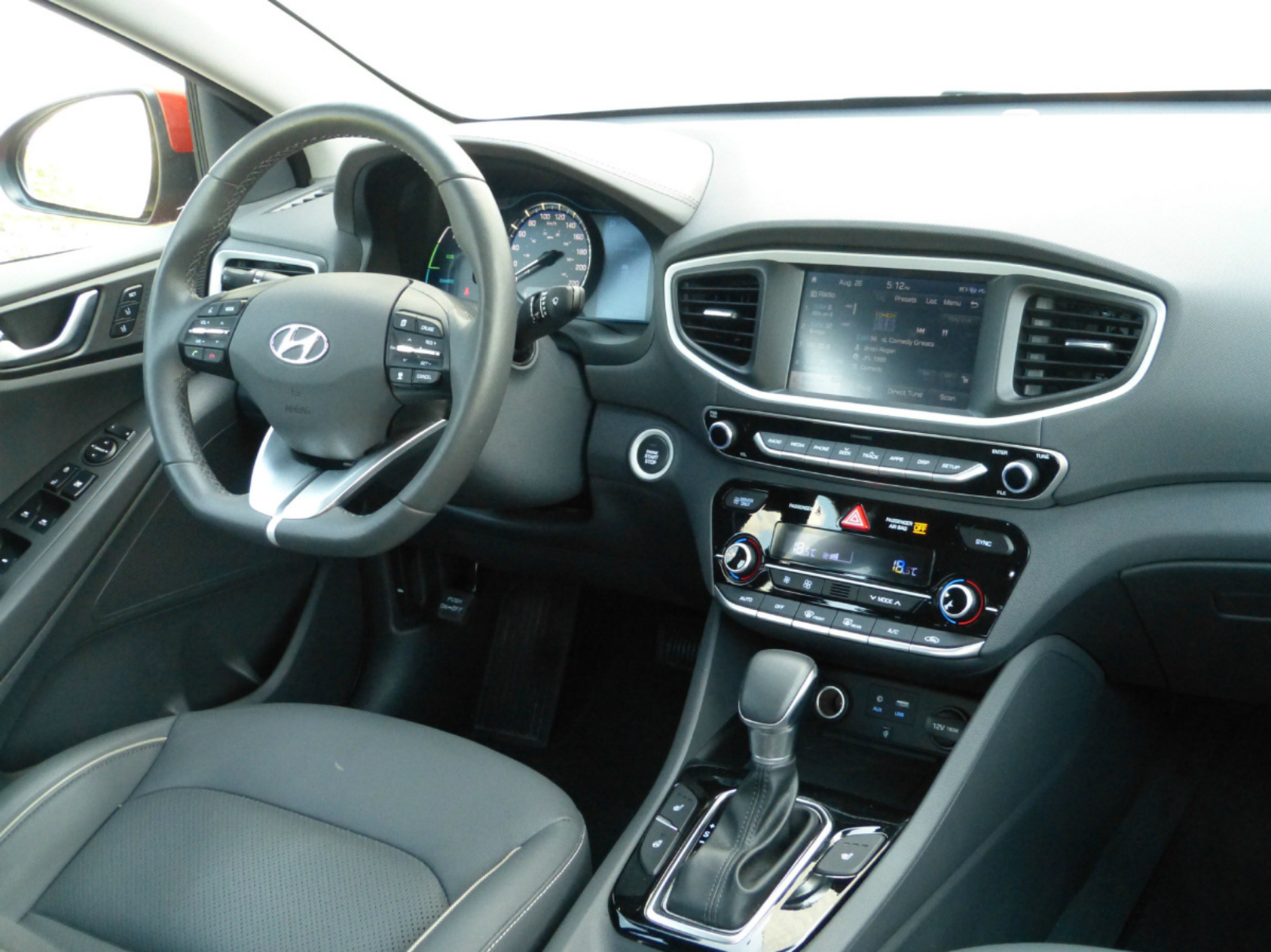 Two cookies to Hyundai for the headlight switch. Turn it on when you pick up the car, and you never have to touch it again. Turn the car on? The lights go on. All of them, as they should. Turn the car off? The lights go off. Why do cars have headlight switches, anyway? But I must take those cookies back, because you cannot disable the damnable automatic door locks. Maybe there’s a clever Hyundai mechanic somewhere who can disable this feature.

Generally speaking, my impression is that unlike the Toyota Prius, Nissan Leaf or Chevrolet Bolt — which announce their uniqueness every step of the way — the Ioniq electric doesn’t want to draw attention to itself. It does its job in the most unobtrusive way possible, presumably so as not to scare off potential customers.

The gas-electric hybrid version of the Ioniq felt very much like the same car, mainly because it is.

The most obvious difference to the driver is the gearshift lever — there is one, a conventional PRND quadrant for the six-speed dual-clutch manumatic gearbox, with a leftwards slide from Neutral to select Manual mode.

On a cold start, the engine will usually come on, then shut itself off if your right foot doesn’t demand it. It will give you up to about 50 km of electric-only range, if you drive very gently.

Like virtually all hybrids, the gasoline engine operates on an Atkinson cycle rather than the Otto Cycle, meaning the intake valves stay open longer, reducing power output but increasing efficiency. The power deficit is made up for by the electric motor, which also gains power from regenerative braking.

The electric motor adds some 125 lb-ft of torque from idle, although the numbers aren’t necessarily additive because they are generated at different r.p.m. levels.

My tester was equipped with Michelin Premacy tires. I have long been a Michelin fan, and after the disappointment of the ‘Energy Savers’ on the electric Ioniq, these renewed my faith. They make a world of difference in the handling of the car, and even if you opt for the electric Ioniq, I strongly recommend you talk your dealer into fitting these tires.

Remember, your tires are the only parts of your car that actually touch the road; your safety and mine are both at stake.

Hyundai is offering two choices for electric or electric-assisted driving, and later this year, a third — Ioniq Electric Plus, a plug-in hybrid. Under certain circumstances, either might be a possible fit for a moderately broad range of customers.

But you will have to pick your spots.

Hyundai is also offering a pure hydrogen car on the West coast; hydrogen obviously is the long-term solution to sustainable motorized transportation, and the sooner we get on with it, the better.

But given our political leadership, Hyundai is prepared for just about every eventuality.

Too bad they don’t bring their Diesel engines here ... 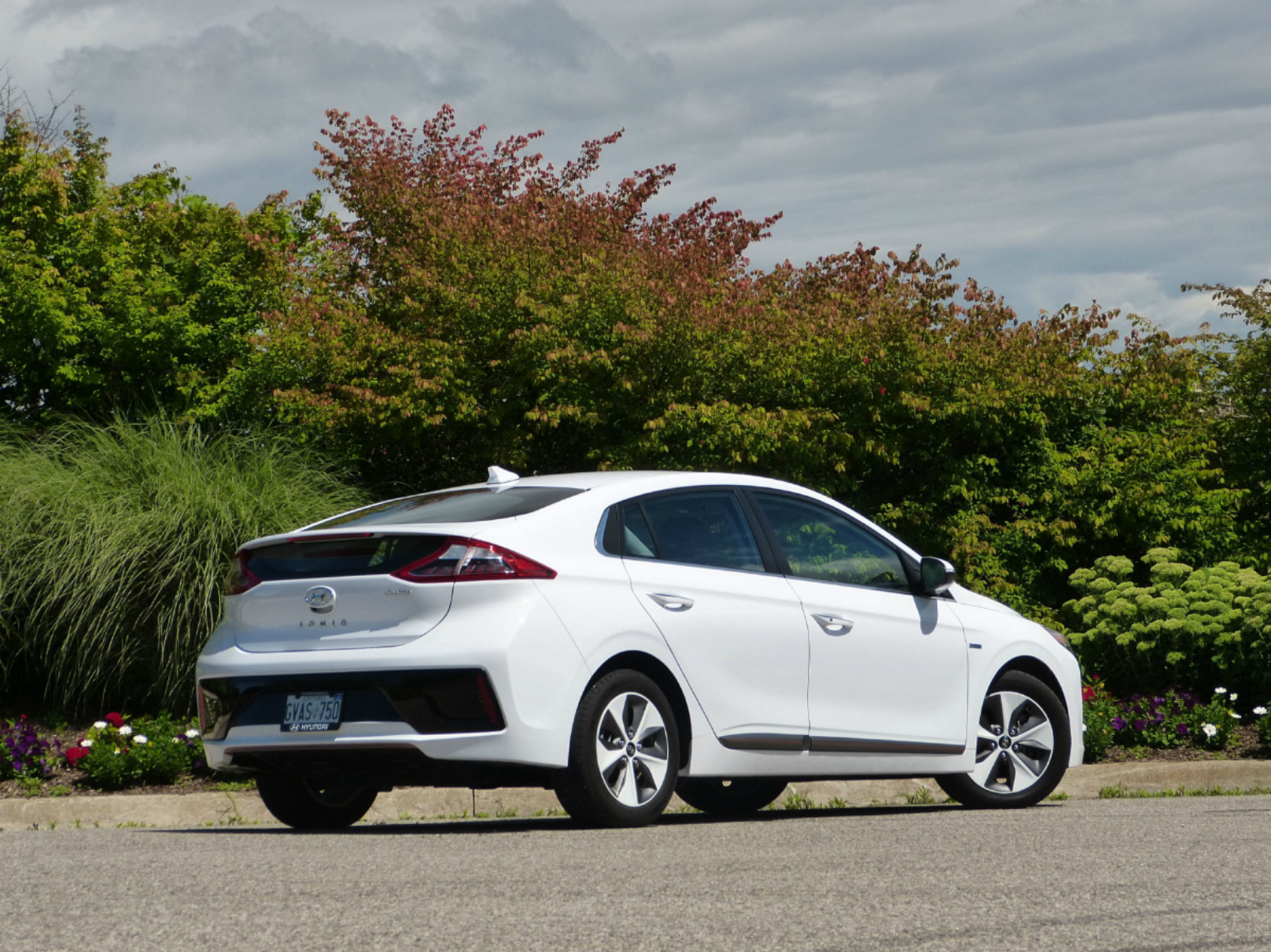