How do budget tires perform versus top-selling Goodyears?

Join the Conversation (0)
You may not have heard of Sailun tires, but the Chinese tire company was confident enough to put its products up against some of the top-selling Goodyears recently in both dry and wet closed course conditions in a ‘blind’ tire test, while providing a closer look at its notable R&D efforts and its North American headquarters based just outside Toronto.

Sailun is a value brand, or what the tire industry calls a third or fourth ‘tier’ brand, meaning its products are generally a few price levels below tier one brands that everyone’s heard of (the Michelin and Pirellis of the world) – and roughly 35 to 45 per cent less expensive than tier one or even tier two brands (think BF Goodrich and Toyo), said the company. But Mark Pereira, Sailun’s director of North American marketing, said those tiers don’t mean much to most tire buyers. 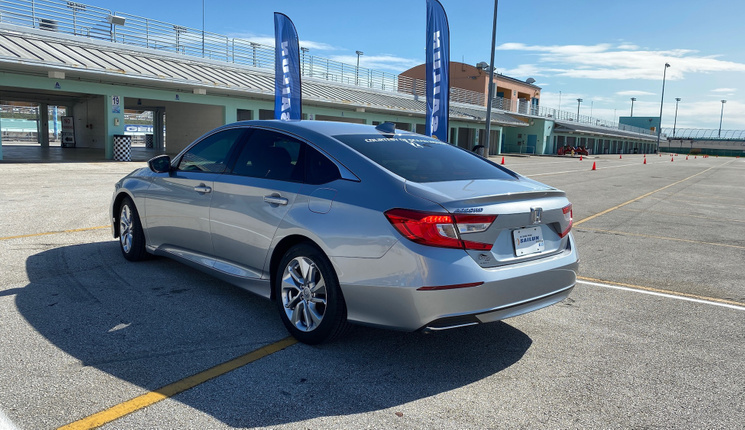 “There’s really only brands you’ve heard about, and ones you haven’t,” said Pereira, who works out of Sailun North America’s head office in Brampton, Ontario, as do most Sailun North Amercia executives, even though the majority of tire buyers and distributors at this face off event were from the U.S. “We know we’re in the value tier,” he said, but that tier is roughly 30 per cent of the tire market in Canada, which is higher than in the U.S.

Sailun began life as a spinoff of Mesnac, a Chinese manufacturing company that built the equipment used by many tier one and two tire companies in 1990. Jared Lynch, director of passenger tire sales said they soon began designing whole manufacturing plants for those same companies. By 2002, the company decided to establish Sailun to use this know-how to build tires themselves and started importing winter tires to Canada soon after, before importing tires to the U.S. a few years later. 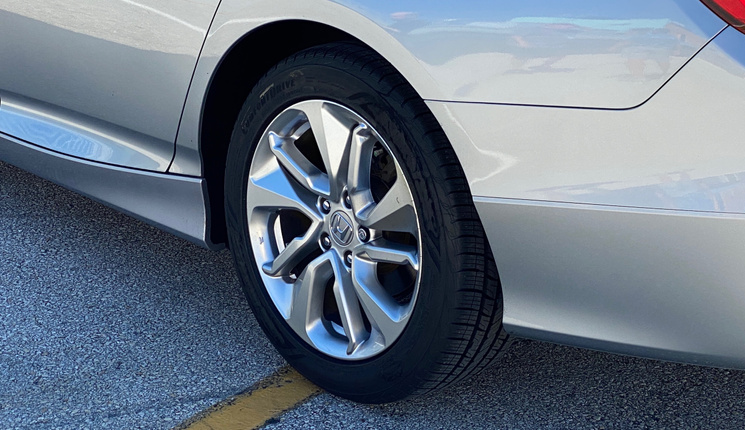 To help showcase that they invest heavily into research and development, which tier four companies typically don’t do, Sailun officials scrubbed off the brand names on the sidewalls, and challenged both tire industry execs and media to rate the dry and wet performance of Sailun versus Goodyear tires on a closed cone course at Homestead Raceway in Miami, Florida. The big track was also used for a few hot demo laps by professional racers in the same Sailun-equipped Honda Accord and Honda CR-Vs we’d tested, perhaps to showcase the tire’s ability not to come apart at hot Miami temperatures – even when pushed harder than any Accord or CR-V driver is ever likely to do on public roads.

But the major eye-opener was the head-to-head testing, not because the Sailun was superior, but because how difficult it was to pick apart one’s superiority over the other, in both wet and dry conditions.

Tested on a new Honda Accord, the Sailun Inspire and Goodyear Assurance ComfortDrive tires were the same 225/50/17V size, and were run through both a dry and wet slalom course. Both tires launched off the line with similar control and response. The only Goodyear advantage in my scoring was in the hard braking distance – it seemed to stop shorter and more confidently.

Through the slalom and emergency avoidance test, there was generous grip to the point where you could push more than you’d think in a family four door, and both tires kept their composure nicely. There was just a hint of tire scrubbing near the limit, and no howling or noise we sometimes see in cheaper tires until you were right at the limit of traction, far above how hard most sedan drivers would push their vehicles.

Granted, this was largely an exercise in feel rather than a scientific test, as we were not measuring braking distances, lap times, or even g-forces in the corners. 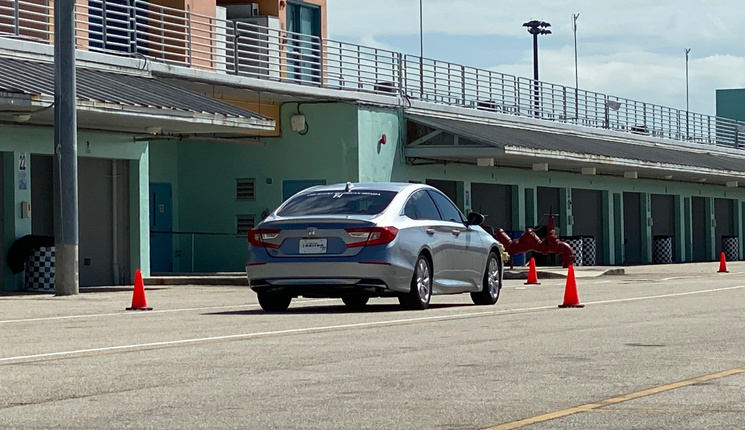 With sprinklers set up and water trucks constantly replenishing the rapidly drying wet circuit, the Sailun again had minimal slip off the start, and maneuvered the tight skidpad and emergency avoidance maneuvers as confidently as the Goodyears. Once again, full ABS stopping at the same brake point from the same speed resulted in a similarly confident brake feel between the two, but the Goodyears stopped just a bit shorter.

One retailer quoted $145 each for the Sailun Inspire, versus $231 for the Goodyear, nearly 40 per cent cheaper. Unlike vehicle OEMs, tiremakers typically don’t release MSRPs, as pricing will vary depending on what other tire brands the retailer carries, and other wide-ranging factors.

The crossover test (Honda CR-V) pitted the Goodyear Assurance Maxlife with a slightly higher H speed rating (up to 210 km/h max), versus the T (190 km/h) rating of the Sailun Terramax HLTs, with both in the same 235/65/17 size.

The braking seemed somewhat better again for the Goodyear in the dry, not in feel, but in visually referenced braking distances from the same speed, though exact trap speeds likely varied a bit on every stop. 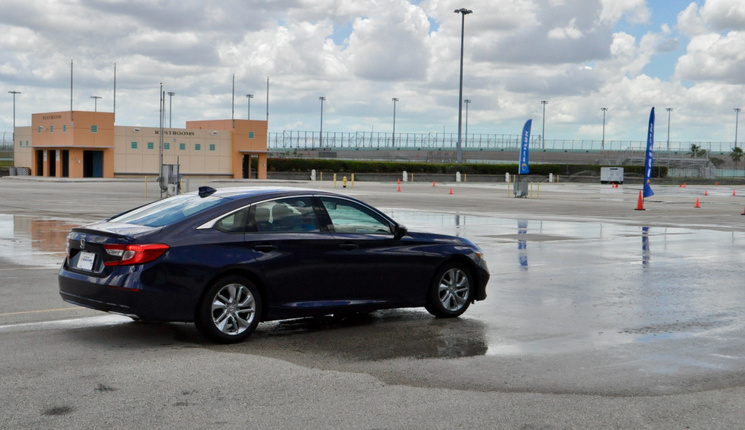 Transitions in the slalom and moose test (emergency lane change and back) seemed a little sharper with the Goodyear, likely in part due to the higher speed rating, but still quite close overall. And that again went whether in the wet or dry.

The most notable difference in these tires by far is in the pricing I found: $163 each for the Sailun Terramax HLT, and $228 for the Goodyear Assurance Maxlife.

Outside of the back-to-back testing, Sailun also took the opportunity at the event to confirm that it will introduce an all-new line of EV and hybrid-oriented tires, called the ERange, which is slated to start arriving in Canada in October. It’s a low-rolling resistance tire, but company officials promise new technology that will improve its durability, braking performance and quietness, compared to its regular all-season tire. 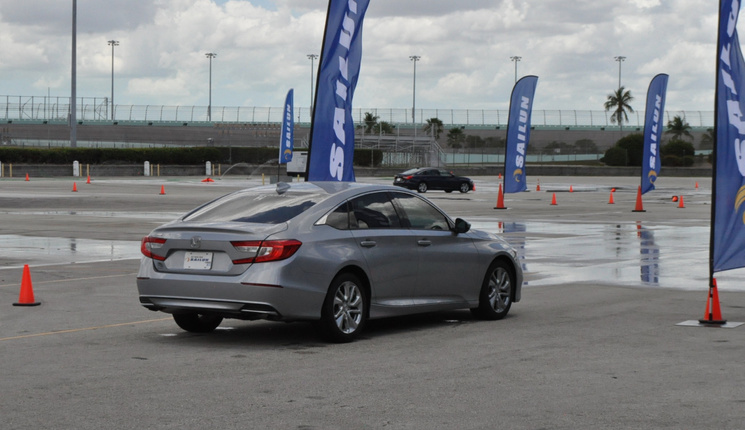 It was there on display, but unfortunately wasn’t available for test drives. They will likely be more widely available after the upcoming winter tire season, but company officials say it will offer similar price advantages to its other tires, despite more advanced technology. Sailun claims that ERange tires had comparable performance in its tests on a Tesla Model 3 as the stock (tier one) tires, with a seven percent improvement in range just by switching tires.

We look forward to testing that claim closer to the tire’s launch. 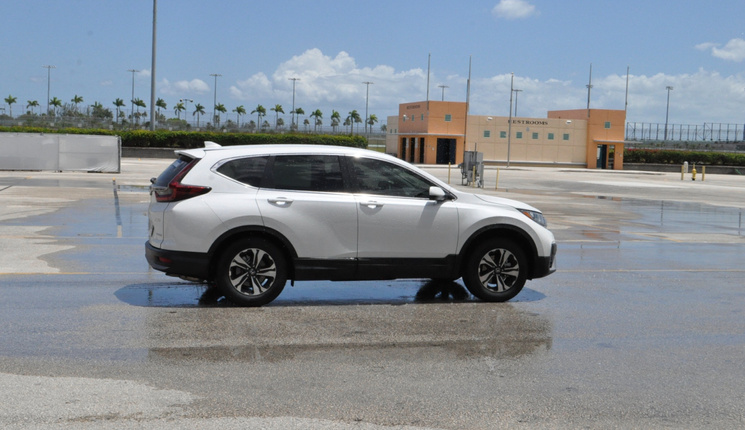