Join the Conversation (0)
It’s not often in these comparison stories that we get to compare two brand-new, never-before-seen vehicles.

But here we are: the Toyota Corolla Cross and Volkswagen Taos are the latest entrants from each manufacturer in the always-expanding small/compact (some can argue “subcompact” – I’m not quite sure with these) crossover game, and they are two similar, but also divergent combatants.

They both are aimed at young, likely active families and both come powered by four-cylinder engines from a pair of manufacturers that are well-versed in a number of crossover/SUV segments. They also have some brand pedigree, more obvious with the Toyota – we all know how successful the Corolla line of compact cars has been through the years – but you have to reach a little further for the Taos, as we’ll see in a moment. So, on paper, they are each perfectly viable choices for buyers.


This is interesting in that the Taos is clearly a VW with its big, famous emblem on the snout, squarish silhouette, bright and very GTI-esque “Cornflower Blue” paint job, and somewhat edgy 18-inch two-tone wheels. I find the Corolla Cross to be more reminiscent of a Jeep Cherokee than anything by Toyota.

The squared-off fenders, smoked grille, the shape of the leading edge of the taillamps, C-pillar shape – even the headlamp lenses – recall the famous Jeep product and in all honesty, I rather like it. It looks way chunkier and more purposeful in person than I ever thought it would be, and the Cypress paint job fits the mould well. I really like the exterior styling of this car, I think more so than I do that of the VW, handsome as the latter is.

What I do like about the Taos, however, are its overall proportions. It recalls the Tiguan before the North American version of that big-selling Veedub became a three-row crossover, by that I mean the Taos is more Golf-on-stilts, as the Tiguan once was. This stands to reason because if you know anything about VW, you know that they’ve cancelled both the Golf and Golf Sportwagen for the North American market (not counting the halo GTI and Golf R models), and so it falls to the Taos to kind of pick up the slack left by those two models. That, by the way, is where the Taos’ “all-new” designation gains a bit of an asterisk, as it is very similar in size and scope to the former Tiguan. The Corolla Cross, on the other hand, is something we haven’t really seen before from Toyota in that it falls between the smaller C-HR and larger RAV4 in size. The important designation between it and the C-HR, though, is that the Corolla Cross is available with AWD and the C-HR is not. 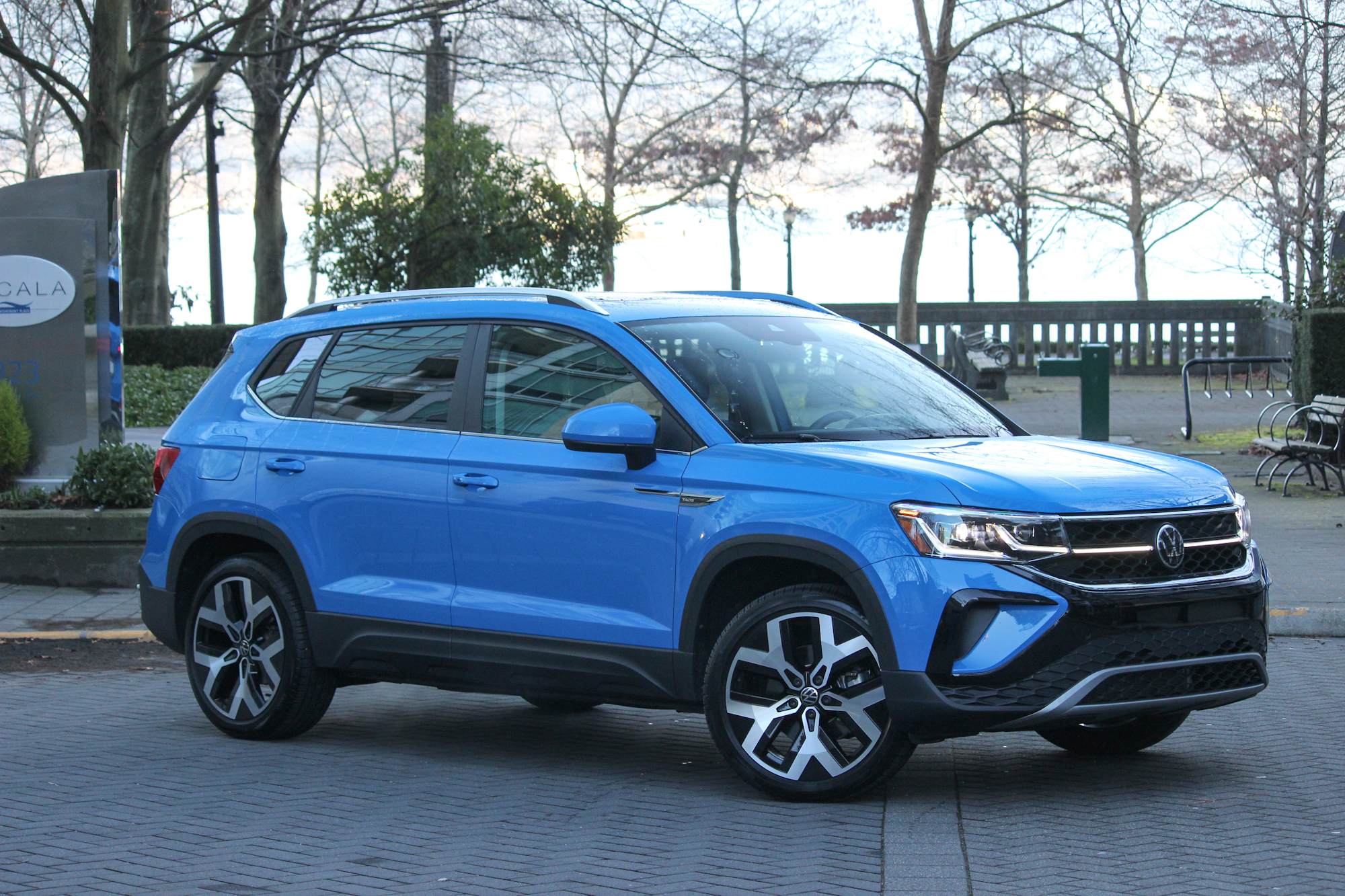 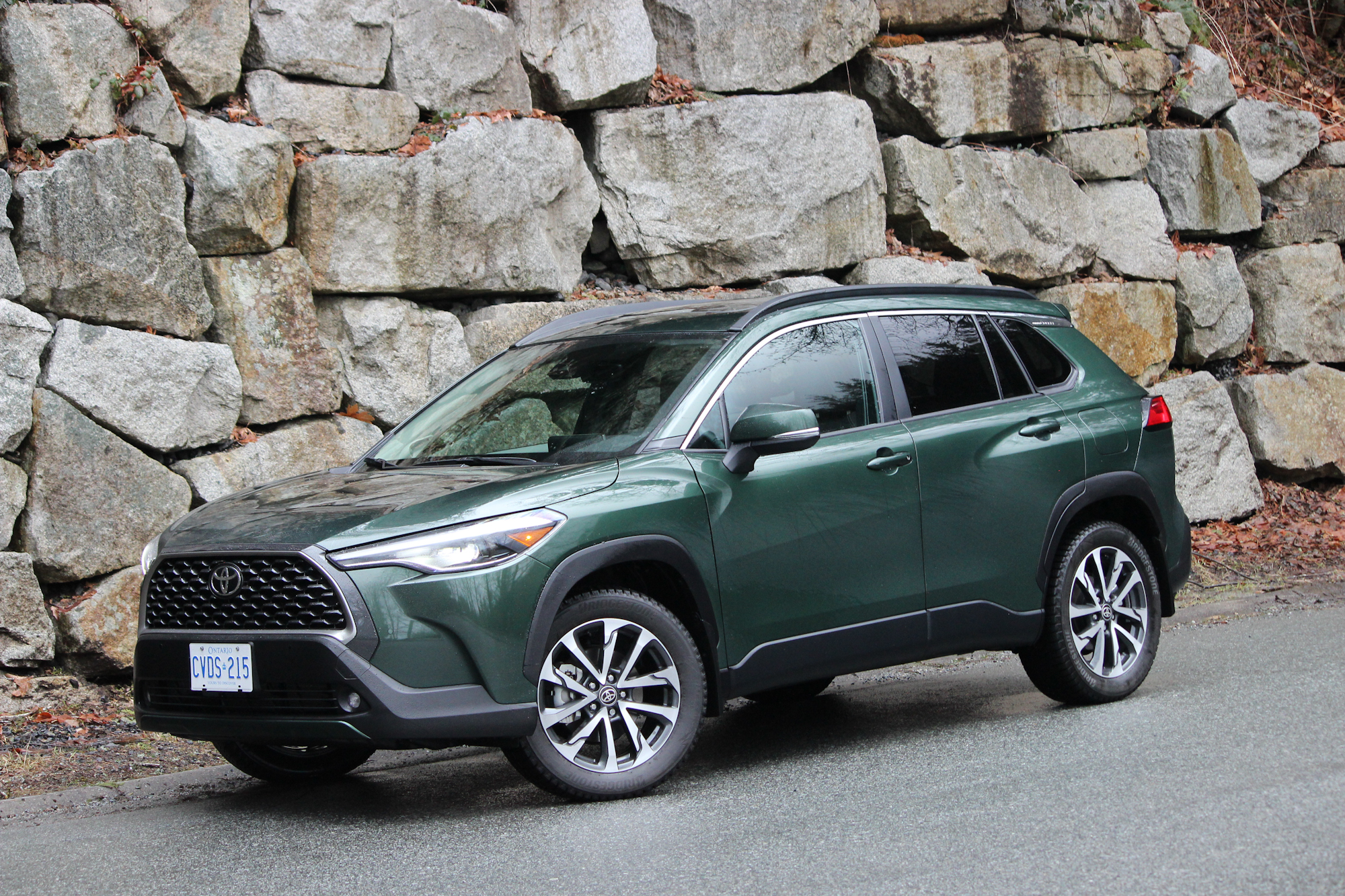 I am, however, a big fan of the digital gauge cluster and the ability to connect wirelessly to Apple CarPlay, both features that the Corolla Cross can’t lay claim to. The Toyota does, however, get a decent-sized TFT display between its analogue gauges.


While these do both have four-cylinder powerplants, the Taos gets a turbocharger which pushes its torque figure to 184 lb-ft, a nice number considering the Taos’ size.

The Corolla Cross makes more horsepower, though, as does most everyone else in this category. Which, it has to be said, is a bit of a problem for the Taos – on paper.

In practice, though, the Taos has an additional trick up its sleeve that helps get the most out of that power, and that’s it's dual-clutch seven-speed automatic. Which, it has to be said, can be had only if you spec AWD as FWD models get a torque converter eight-speed auto. The result, coupled with that generous torque figure, is athletic forward progress once past a dabble of turbo lag that only a quick-shifting dual-clutch can provide. It feels way quicker than the numbers suggest, and that’s just on tip-in. The torque curve really comes into its own once, at speed, the multiple ratios are there to allow great power application across a broad rev band. 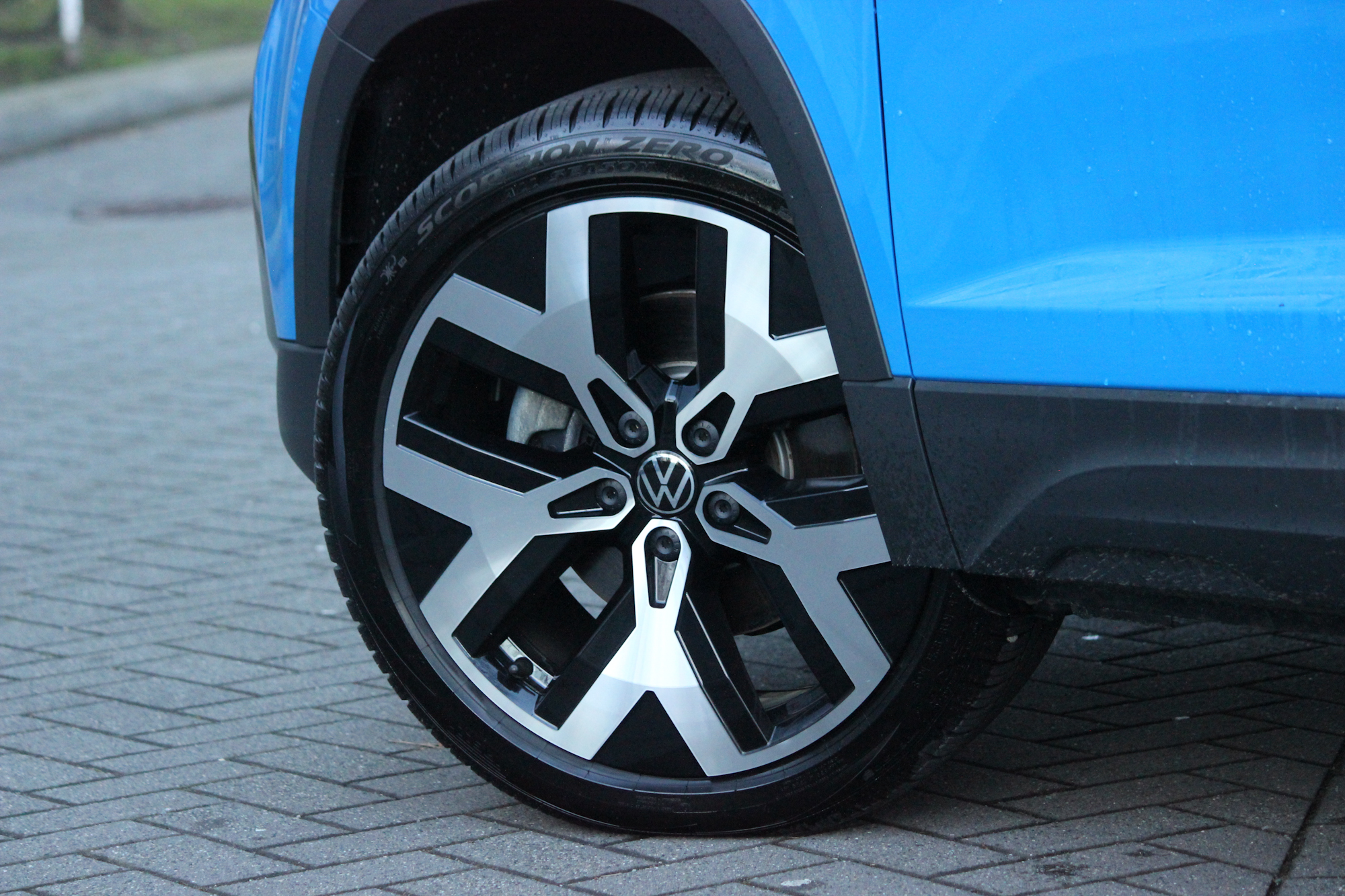 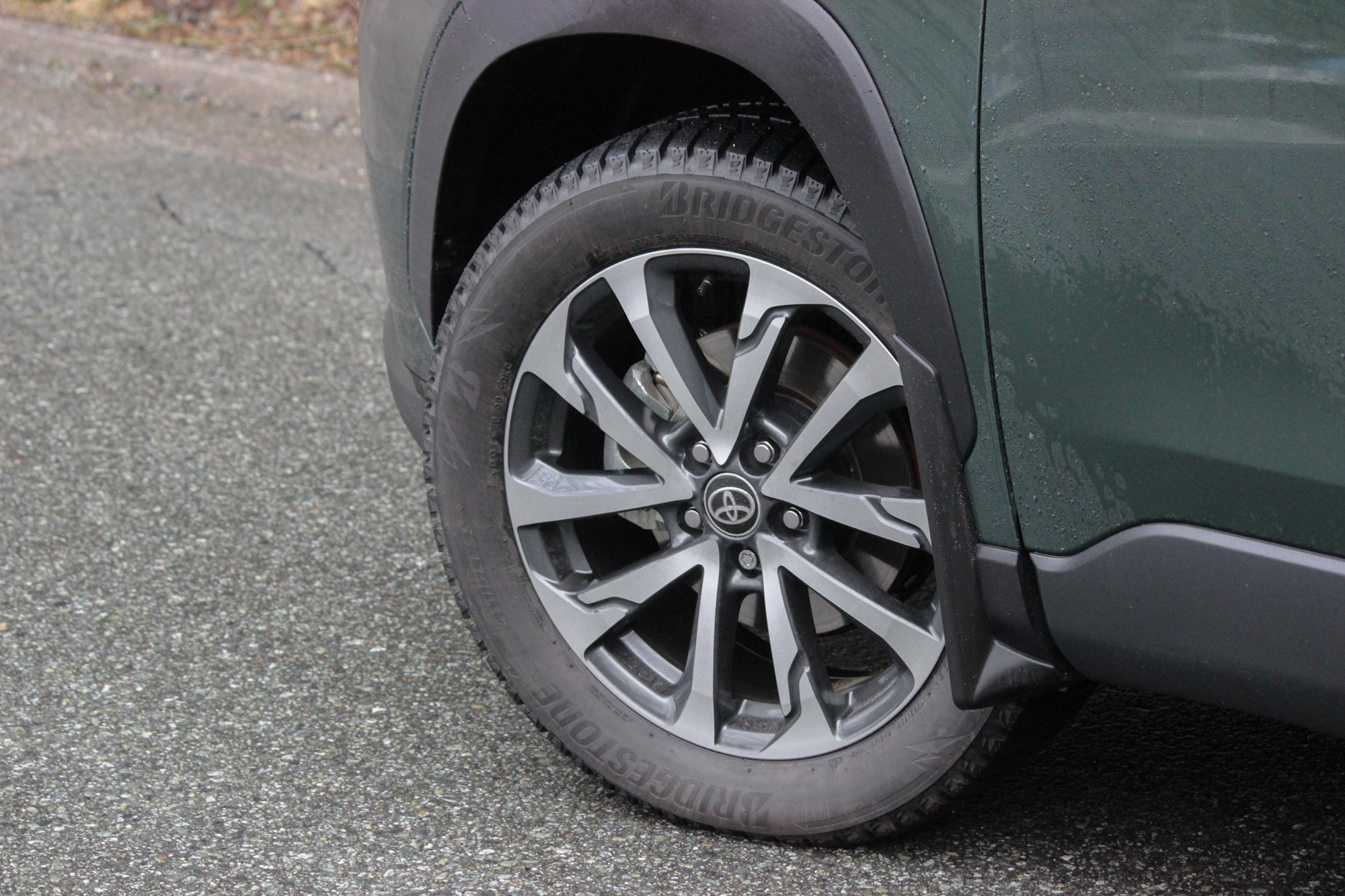 The Corolla Cross – like its so-named sedan and hatchback brethren – gets a CVT automatic. Of course, these transmission types are good for fuel economy and they can make for some smooth acceleration, but they rarely make for what I would call strong acceleration and, regrettably, the Cross is no different.

Dabbing the accelerator pedal will garner a response, but not an especially athletic one and the more you press on, the more strained it feels. It may have more horsepower the Taos, but unlike the Taos which makes the most of the power it has got, the Cross is just the opposite, as its 2.0-litre four-banger feels constrained by that transmission. I don’t expect a vehicle like this to put its power down like a sports car, but I do expect it to not leave me wanting when it comes to menial everyday tasks like passing a truck on a two-lane or entering a freeway. I won’t say that the Corolla Cross can’t do this stuff. I can just say that I found myself thinking about it a lot more before I attempted such tasks and that the powertrain just doesn’t instill as much confidence as does the Taos’.

What the Corolla Cross does return, though, is a more comfortable ride than the Taos. Even the harshest bumps are well ironed out by the Cross’ dampers and it flows over most any road with grace and comfort. Add a slippery shape and smart sound deadening work around the wheel wells and front bulkhead, and you have a properly serene ride.

The Taos, for its part, has the better handling out of the two. The steering is nice and direct (if a little woollen on feel) and the dampers have been tuned for a driver looking for a more athletic and responsive drive. Again, if you’re going to go after buyers longing for their Golf, this is the kind of thing you need to do.

That suspension tuning and those big wheels, however, do make for a firm ride and one that will get upset over repeated bumps such as what you might find on a pockmarked city street. Also contributing to some less-than-smooth progress is that DSG box as creeping forward in traffic with dual-clutch boxes is often a challenge to do, and such is the case here. Aggressive shift mapping will cause some lurching that you need to be ready for. When you really get moving, though, ‘oh boy is that Taos a willing dance partner.


When it comes to interior comfort, both of these punch above their weight class, but in somewhat different ways.

As mentioned before, the Cross’ interior has more open space, feels a little easier to breathe in and provides some really comfortable and supportive chairs that will coddle both front and rear passengers on long journeys.

The Taos, though, provides the roomier back seat both in terms of head- and-legroom, whereas the Corolla Cross betrays its connection with the smaller C-HR with what is a bit of a deficit of rear legroom. This is not a shot at only the Corolla Cross. I have driven most of the competition in this segment, I can safely say the Taos cleans the clock of most of them when it comes to how generous its back seat is. 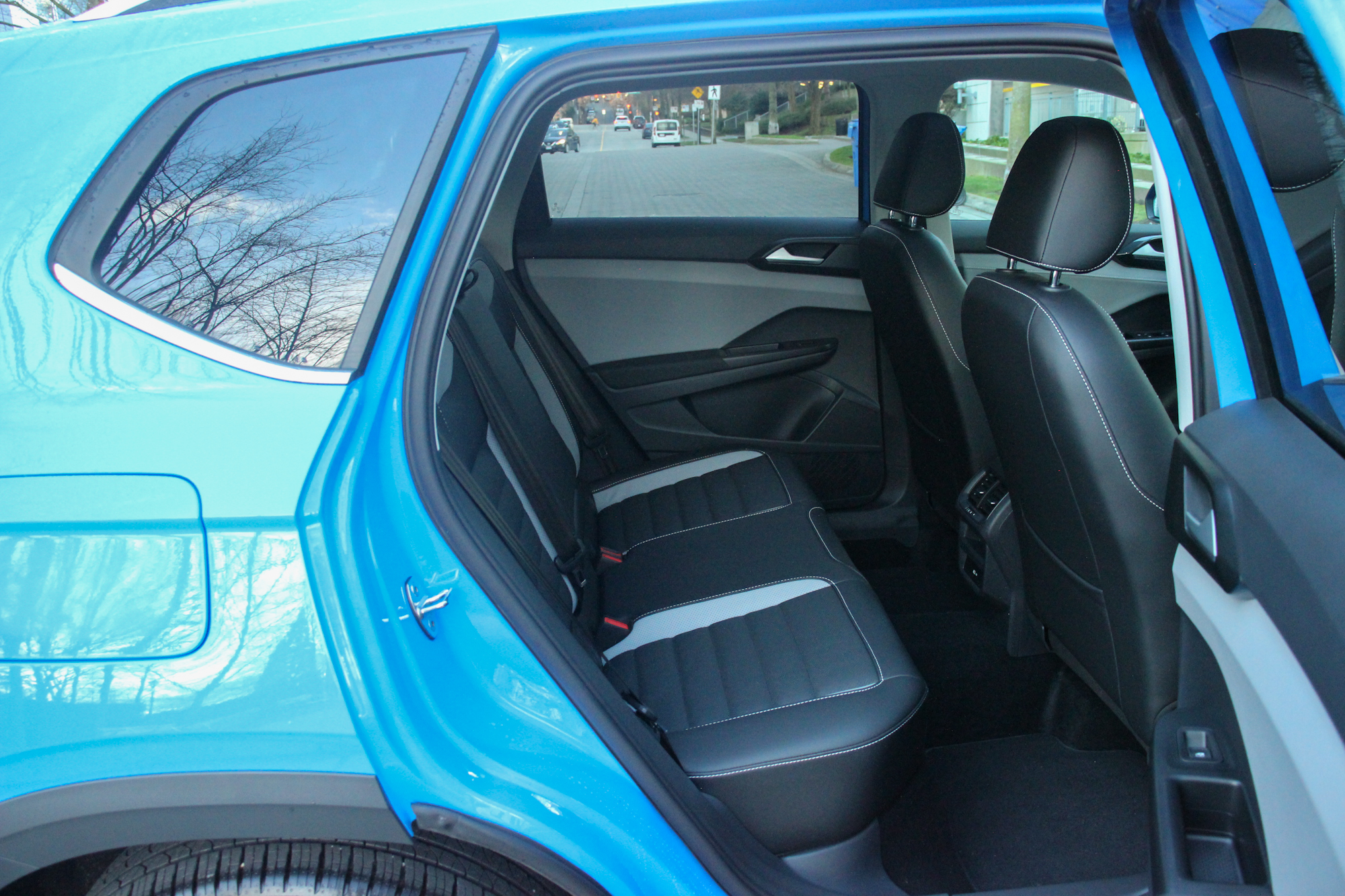 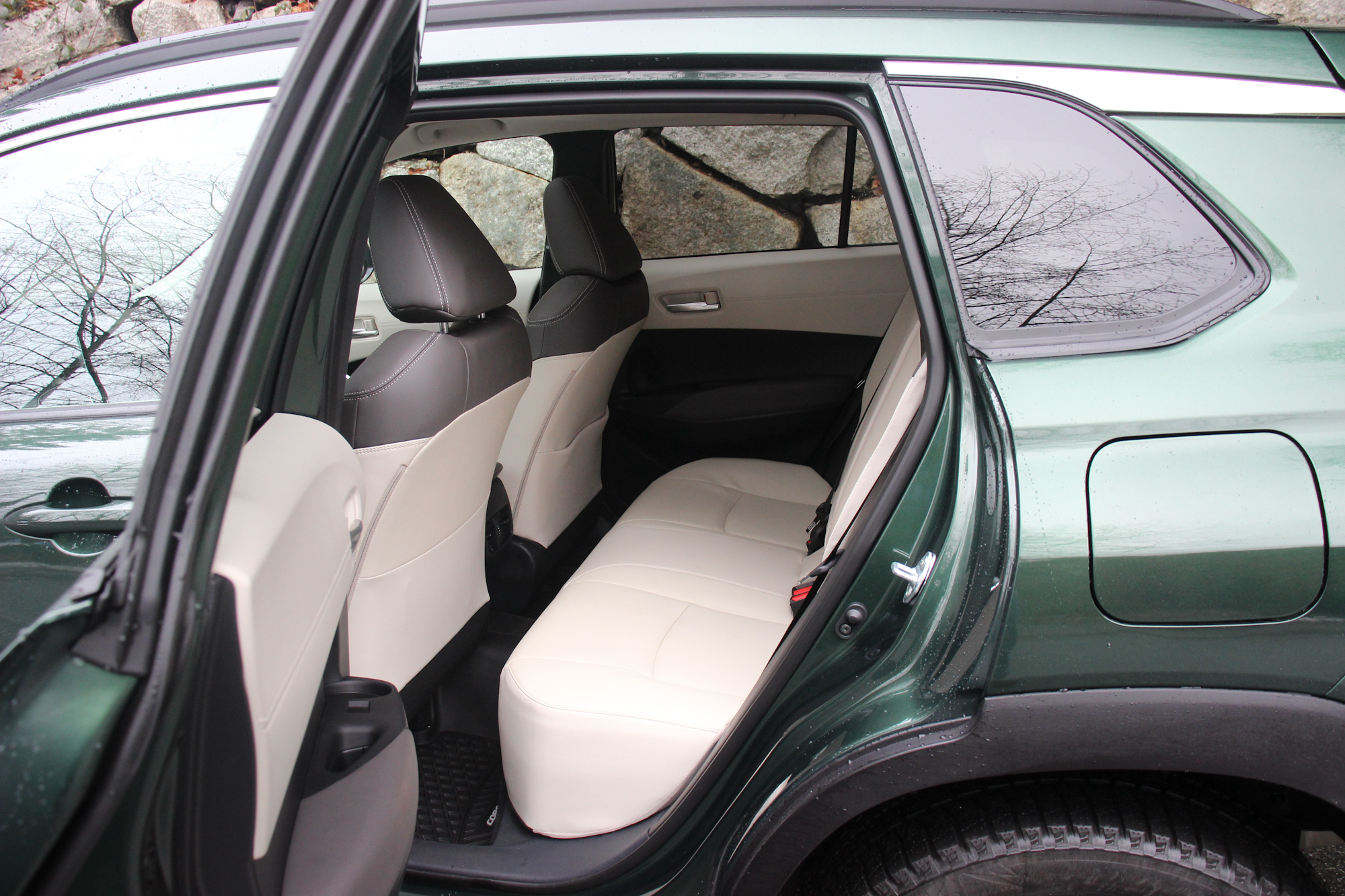 Less generous, it must be said, are the VW’s seat cushions. They are supportive enough, but not as padded as the items found in the Toyota so in the comfort sense, each one of these giveth, and each one taketh away.

And how VW found all that rear back seat room becomes evident as it doesn’t sport the deepest of cargo bays. On paper, it has more room behind the second row than the Corolla Cross, but the Toyota’s bay is deeper and easier to load.


Strange as the Taos’ infotainment system looks, it’s fast enough, fairly intuitive and offers the wireless connectivity mentioned earlier and is your conduit to the Beats by Dre audio option on my tester. Eagle-eyed (or is that “eared”?) VW-philes will know that VW’s former audio system of choice was Fender – yeah, like the Stratocaster – and this new system doesn’t have quite the punch I’ve come to expect from VW.

The Cross’ system is also an upgraded JBL piece and while it sounds good enough, the Corolla Cross still gets Toyota’s older infotainment system with its somewhat blurry graphics, fussy, alphabet soup-like navigation and less-than-zippy response to touch inputs. Luckily, Apple CarPlay is here – albeit wired – and seems to respond better. It’s where I kept it most of the time. 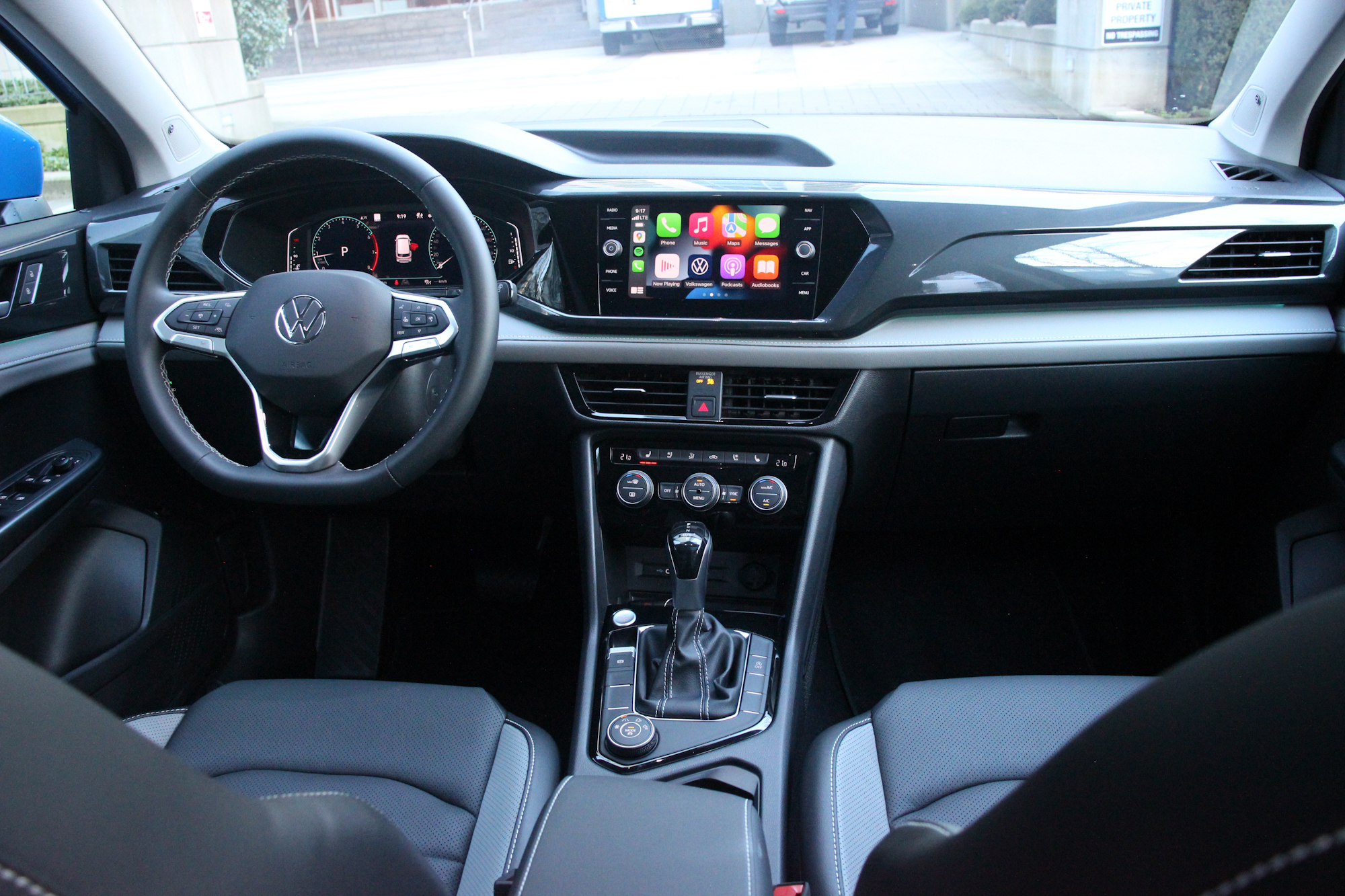 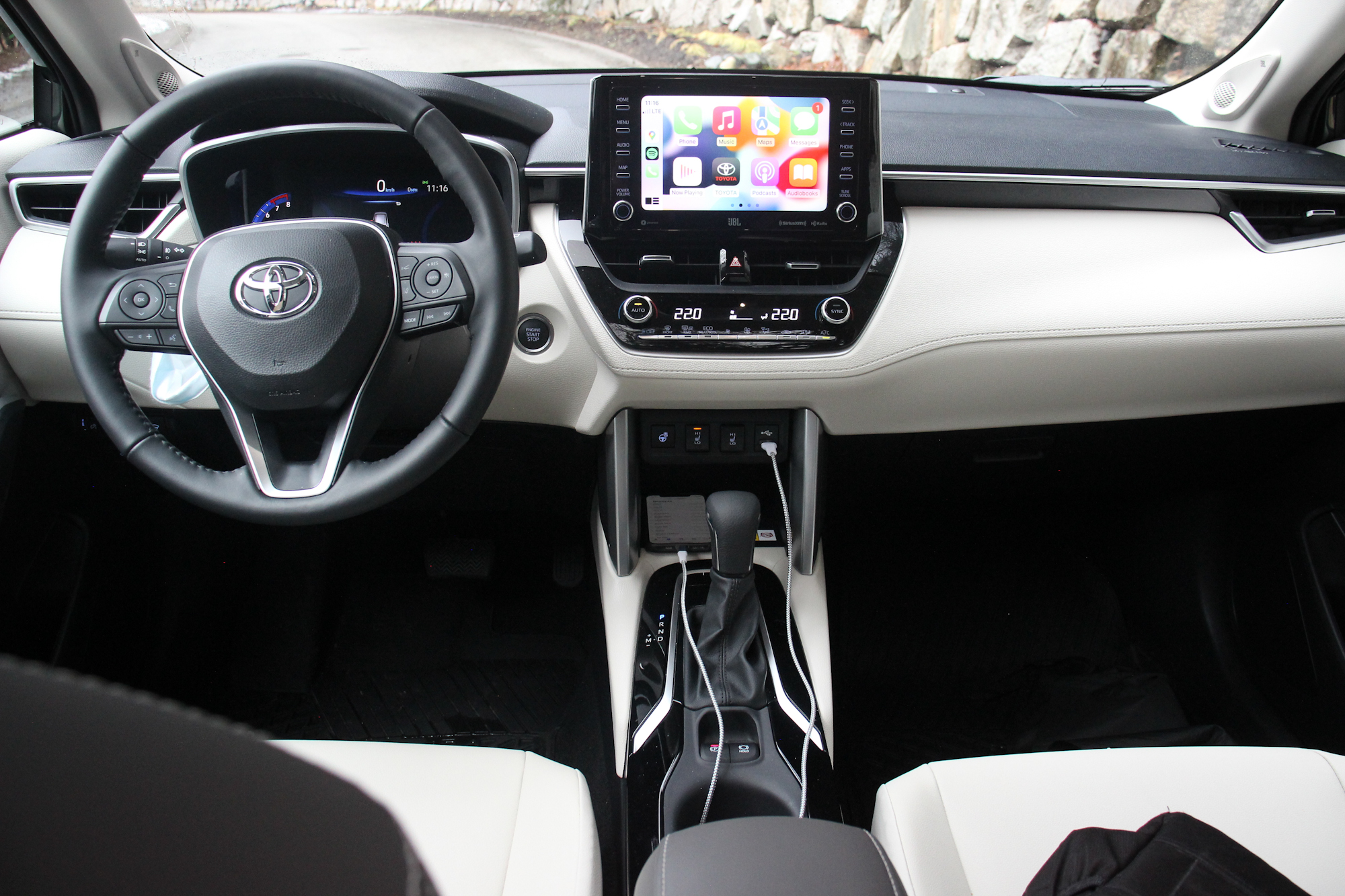 
The Taos starts at about $2,000 more than the Corolla Cross, and that’s with it getting fewer speakers and a smaller infotainment display. Add the better fuel economy the Toyota gets, and it’s hard to argue against its being the value champion here.


I think by now it’s pretty clear; for me, the choice is Taos. I’m willing to spend the extra money for that performance and interior dimensions, not to mention the more robust infotainment.

I do like the Cross’ styling, though, and those seats are top-notch. It’s just I had trouble getting past that powertrain no matter how handsome the thing looked. Many will dig the Corolla Cross for its comfort and ride quality; I’m choosing the Taos because I do miss the Golf, and this works as a replacement – for the most part.