Join the Conversation (0)
What do you do when sales of your flagship are falling, but you already have more than enough crossovers and SUVs in your lineup? If you're Toyota, you create the 2023 Crown. A sedan that's taller, making it easier to get in and out and giving you just a bit of the better visibility that comes from sitting further away from the ground.

This is the replacement for Toyota's Avalon, a car that has been the brand's flagship four-door in Canada for almost 30 years. Its replacement brings back a name Toyota hasn't used here since the 1970s. Crown. A marque Toyota has been using since 1955, meaning there is a lot of heritage behind that new badge.

The 2023 Toyota Crown is a sedan, or at least that's how we see it. It's just taller than most sedans, as Toyota has raised the car through a number of measures including the standard 19 and optional 21-inch wheels. The latter is the largest Toyota has ever put on a sedan. It's raised up enough that in Japan this car is sold as the Crown Crossover and there is another car sold as the Crown Sedan. 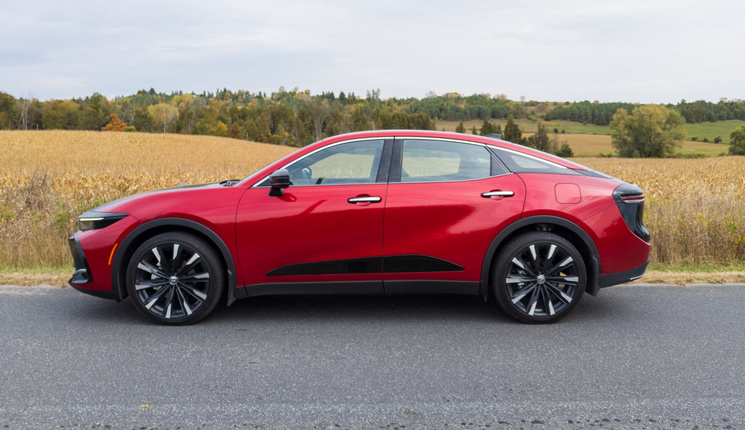 Raising the car raises the hip point. An all-important dimension that decides how easy (or hard) it is to climb in and out of a vehicle for an average height driver. One of the reasons for the growing SUV popularity is that higher hip point. Crown's hip-point is nearly SUV-high, and we can confirm hopping in and out of this sedan is much easier than most of its competitors.

The difference between this and a traditional crossover is that from that point you enter a more sedan-like seating position. You sit low and relaxed like a traditional sedan, not dining-chair upright like in a crossover. That has let Toyota keep the roof low (it has more headroom than Avalon, but still not much for a giant like me), giving the Crown a new sweet spot of easy egress with a more traditional driving experience. We're fans. 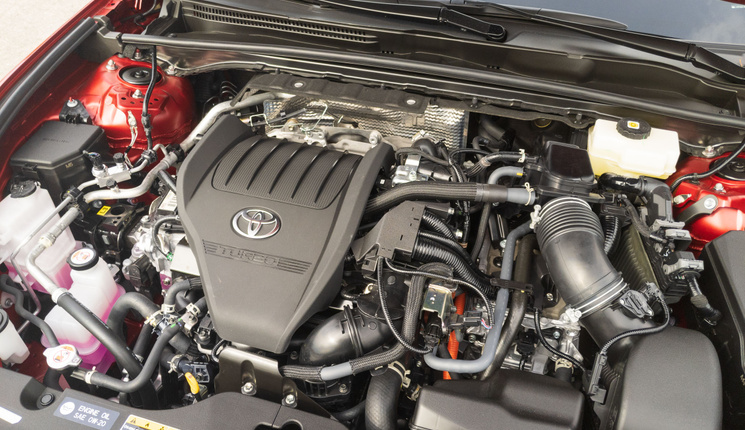 Toyota is offering two powertrains for the Crown. The first is the 2.5L four-cylinder hybrid system we know from Toyota's other hybrid models. We didn't get to drive this one, but expect it to deliver the same seamless and thrifty (if dull) hybrid experience it offers in the Camry, Highlander, and others. The second system is called Hybrid Max and it turns the Toyota Crown into something much more fun to drive.

Combining a 2.4L turbo-four and two electric motors, the system offers 340 hp and a boatload of torque. Instead of Toyota's usual hybrid eCVT, this has a six-speed automatic that makes it much more responsive. Power to the rear wheels comes solely from the electric motor, but Toyota says it can split the torque 70:30 front-rear or up to 20:80 front-rear, meaning that motor is seriously beefy.

Use the Sport + drive mode and the Hybrid Max driveline sent enough torque to the tires quickly enough that on our dry 18° Celsius test drive day, the car could break the tires loose enough for traction control to kick in. At 70 km/h.

Yes, this is a hybrid driveline that's fun when you want it to be. Near silent in normal driving and cruising, the hybrid system comes alive when you mash the gas. It stays quiet, but hard acceleration is accompanied by a high-pitched electrical hum from the motors. It's an unusual mechanical noise, but it absolutely enhances the driving experience. And should still have no problem hitting its 7.8 L/100 km combined economy rating if you let it. 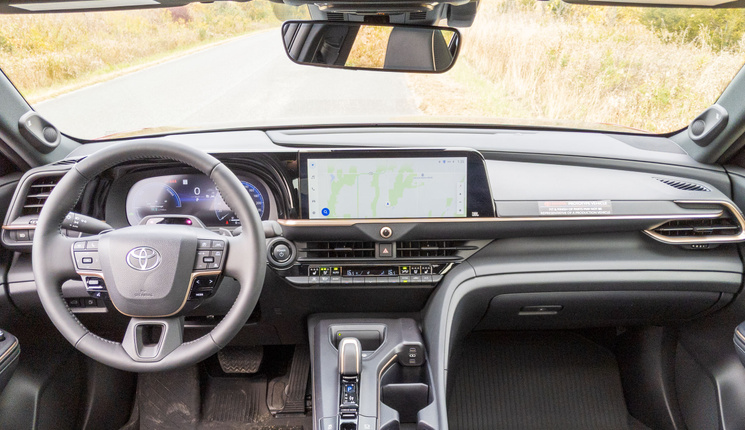 Ride is flagship smooth, and as good as anything Lexus offers. We could tell we were hitting large bumps in the Crown, and could hear some of the impact, but almost none of the impact could be felt. The car felt oddly detached from the road, as though it were hovering above it instead of driving down it. Astonishingly comfortable, thanks to the adaptive variable suspension.

Soft bushings and coated coil springs help smooth the ride and the adaptive dampers make up for those changes that might otherwise make the car overly floaty. Another neat trick is the variable oil pressure shocks that reduce the effects of bumpy roads. Solenoid actuators minimize pitch and body roll, and the whole system works well together to give the Crown
impressive smoothness.

The cabin is typical Toyota, though it does get fancy features like LED lighting. It has a solid layout and feels very functional, if not overly luxurious. A 12.3-inch touchscreen has Toyota's latest multimedia system with OTA updates and "Hey Toyota" natural voice controls. It supports wireless Android Auto and Apple CarPlay and has dual Bluetooth capability. A Digital Key feature lets you use your phone instead of a real key, and lets you give others temporary access on their phones should you desire.

All trims of the Crown come with Toyota Safety Sense 3.0, now enhanced with sensors offering improved detection capability. The pre-collision system can now pick up motorcyclists and guardrails in some conditions, for example. Blind spot monitoring is also standard. On Platinum grades, Toyota's Advanced Park System will find an open parallel or perpendicular space and then park the Crown for you. 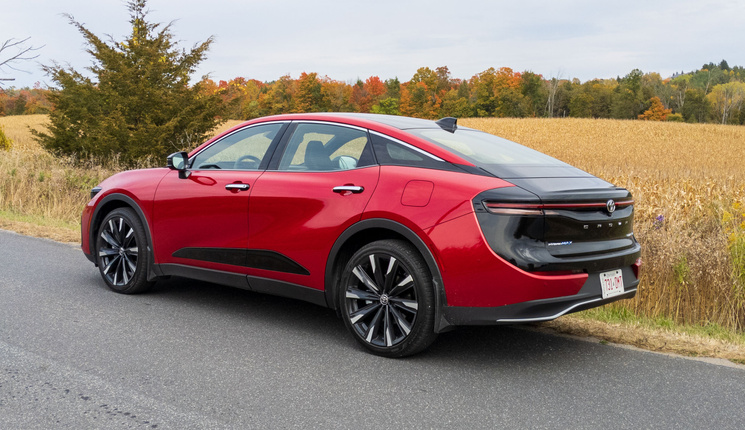 Our test vehicle was also equipped with what Toyota calls the Driver Monitor Camera. It watches you to make sure you're watching the road, and while it's not the first such system this is still a very rare option. It worked well, though I thought it was a bit aggressive in its detection. Then again, maybe I was looking away for longer than I had thought during that shoulder check. It won't be part of the Crown package at launch, and Toyota wouldn't say when it would. We expect it sooner rather than later.

Toyota has built an exceptional sedan with the Crown. It's comfortable, quick, smooth, and easy to get in and out of. We're just not sure that anyone will care. Will the market respond to this sedan evolution, or are potential buyers going to look to bigger vehicles like the Highlander that are less efficient and less enjoyable places to sit? Toyota, obviously, is hoping that buyers will care. Those who do will find a delightful new vehicle offering.