The CR-V Hybrid crosses the border.

Join the Conversation (1)
SANTA BARBARA, Calif. – Honda has been selling a hybrid version of its best-selling CR-V in the U.S. since 2020, but much to the chagrin of Canadian hybrid intenders, that car never crossed the border.

But that unfortunate circumstance will soon change when the all-new 2023 CR-V Touring Hybrid goes on sale on both sides of the border later this fall. The occasion will mark the first time the CR-V has been sold as a hybrid in Canada.

Like its gas-powered sibling, the 2023 CR-V hybrid delivers a host of improvements, from a fresh design to more standard tech and safety kit. And, like its stablemate, and unlike the outgoing hybrid, this one will be built by Honda Canada Manufacturing (HCM) in Alliston, Ontario. In fact, HCM is the lead plant for the CR-V worldwide.

From a chassis standpoint, the CR-V hybrid shares some common architecture with the 11th gen Civic and all-new Acura Integra, but the former is a larger vehicle than its car cousins. The CR-V hybrid receives a raft of chassis stiffening, from the use of structural adhesive, and a stiffer floor joint (hybrid only), to more rigid front and rear subframes.

These, combined with other enhancements, such as low-friction ball joints and low-friction electronic power steering, improve steering feel and overall structural rigidity by 15 percent, according to Honda. 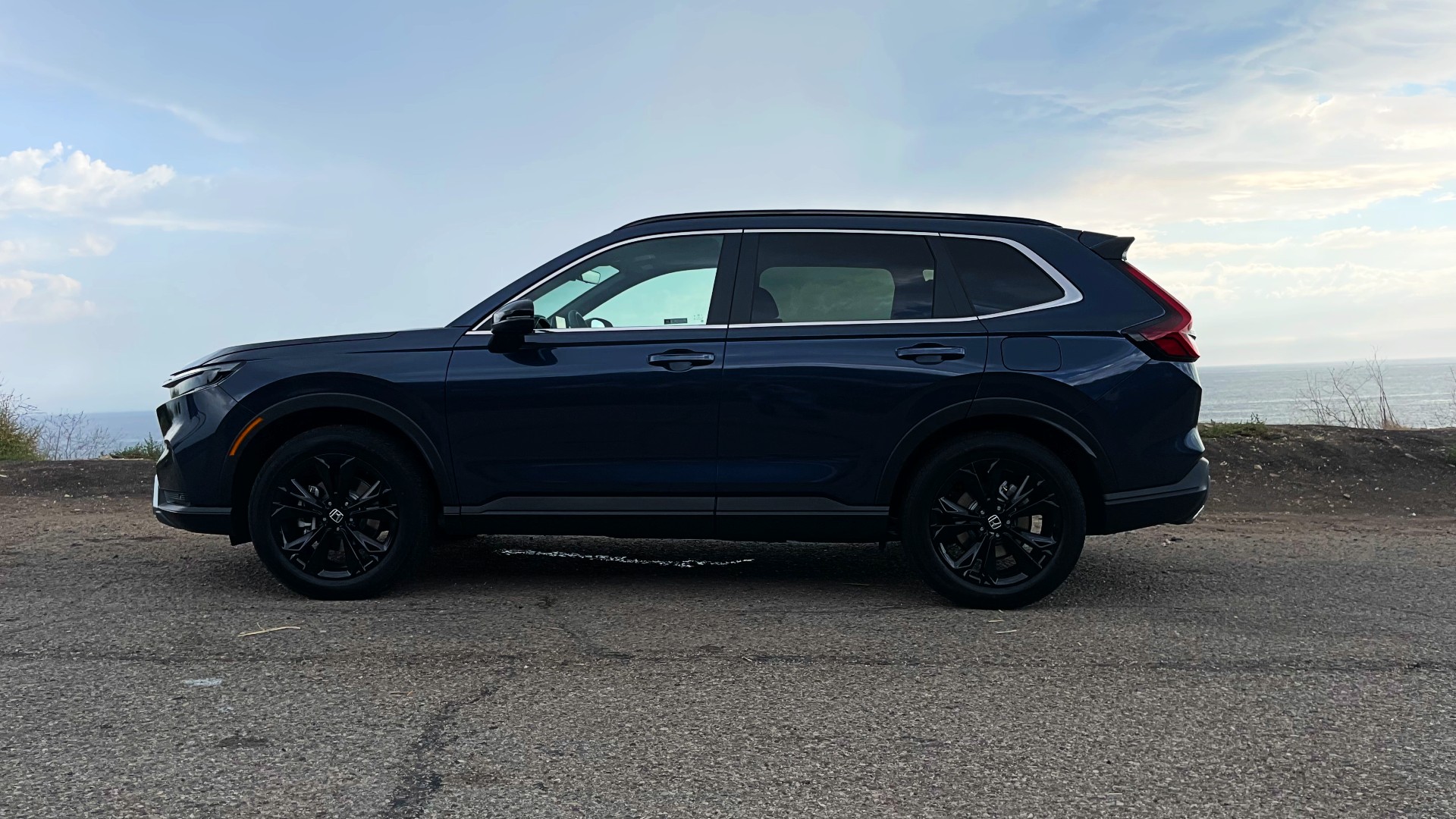 Dimensionally, the ‘23 CR-V hybrid is longer and wider than the outgoing model, and rides on a longer wheelbase. Interestingly, its height is unchanged. The new car also has a wider track at both front and rear.

With an increase in exterior dimensions, the new CR-V hybrid is also bigger on the inside and has more cargo capacity. With the rear seatbacks upright there’s 1028 litres of cargo volume, and 2030 litres when they’re folded. 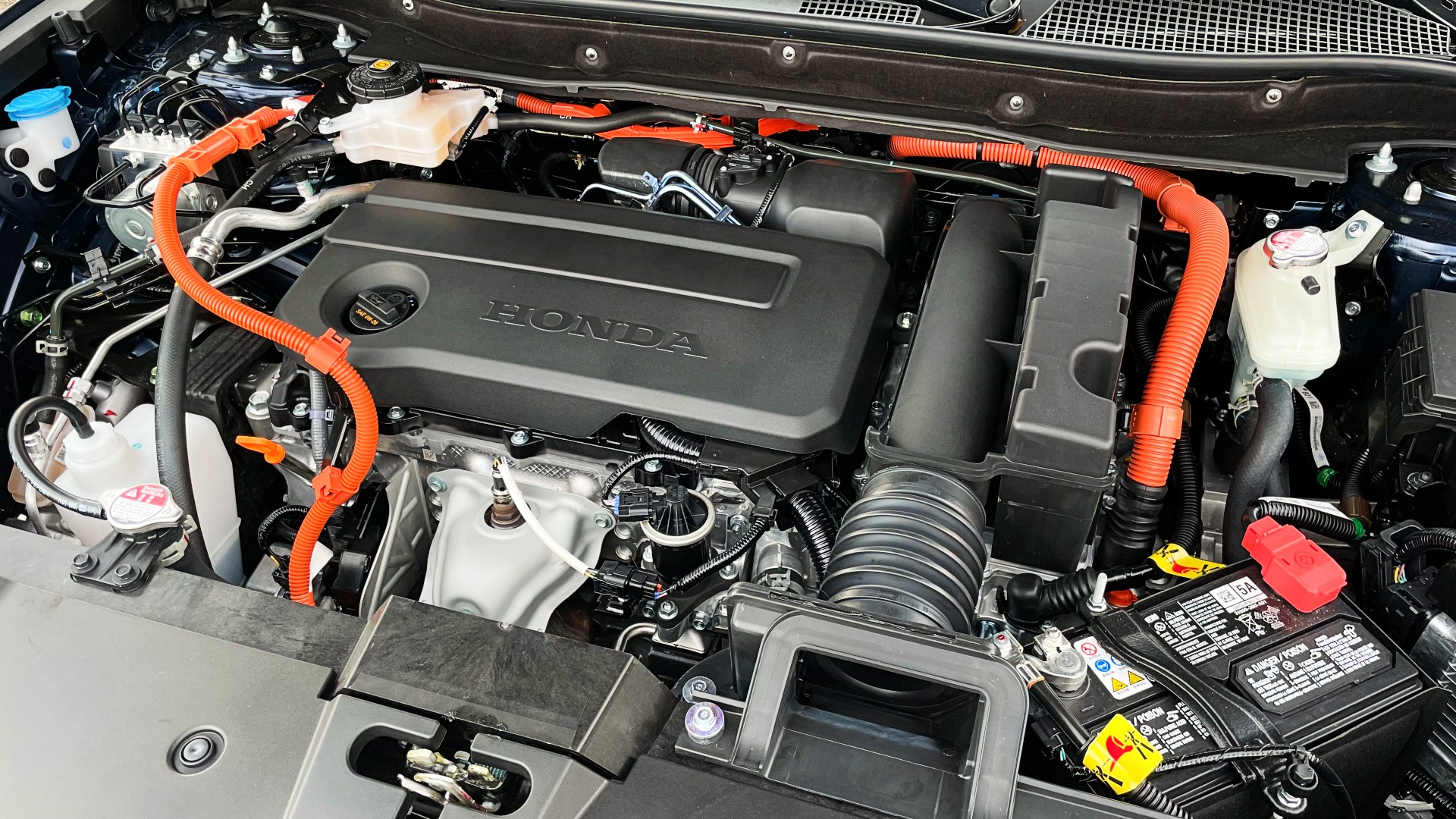 The 2-motor hybrid system comes with a parallel-axis 2-motor arrangement with a larger traction motor and larger power generator. It also has a low gear coupled to the engine for towing (1,000 pound maximum), and a more powerful Power Control Unit, among other items. Combined output is rated at 204 horsepower and 247 lb-ft. of torque.

On the transmission front, the CR-V hybrid uses an electronic CVT that features a B (braking) mode for regenerative braking, in addition to regular drive. B mode makes one-pedal driving possible, thanks to braking force that is more than double (0.09G) that of regular D mode (0.04G). B mode braking force can be adjusted via steering-wheel mounted paddles. Four driving modes come standard: normal, sport, eco and snow – the latter is a new mode.

I wrote about the gas variant of the 2023 CR-V last month so I’m not going to dwell too much on design and content, as the hybrid follows a near-identical path as the gas-powered models. 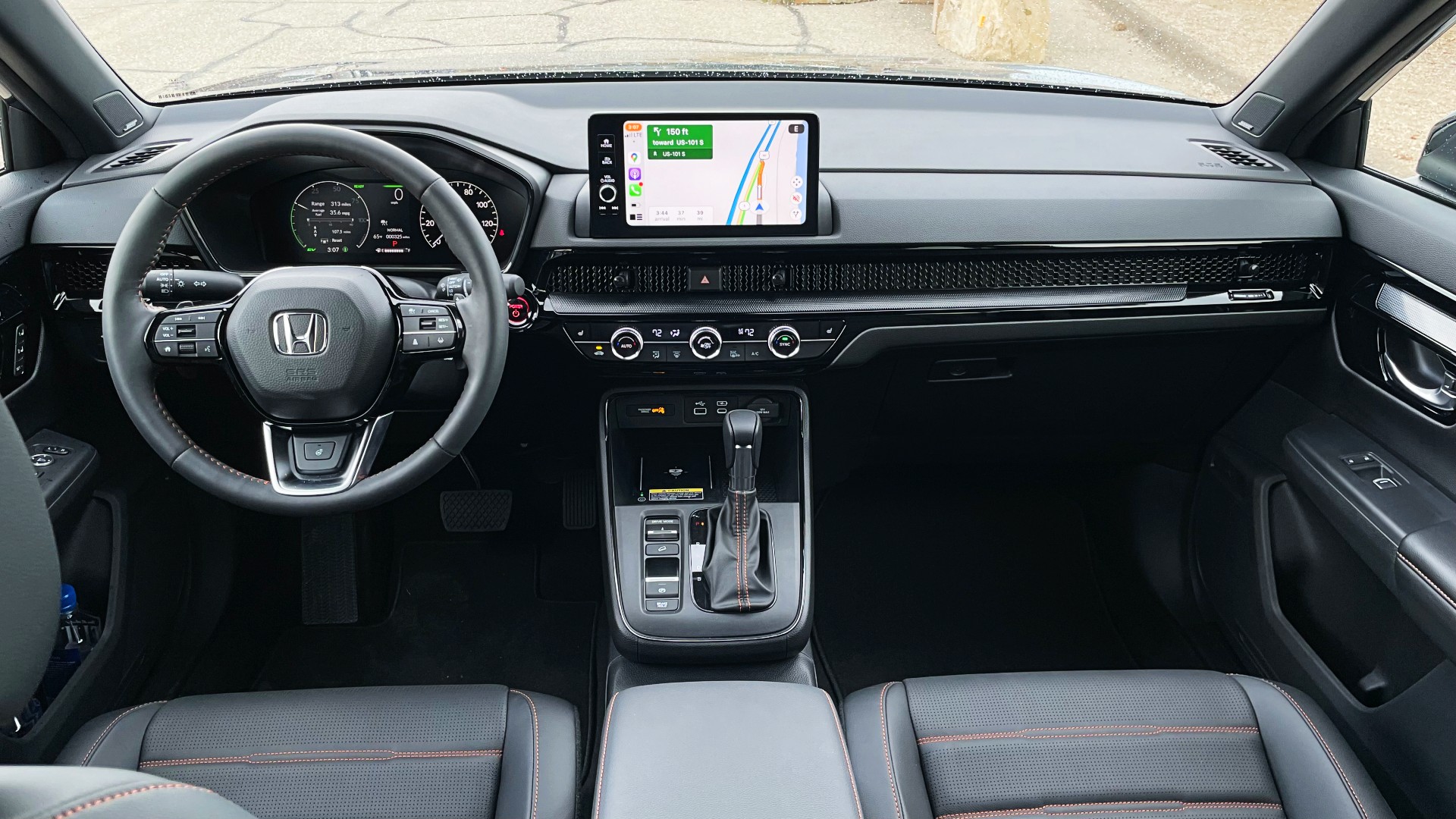 There are several features that differ, however, that are worth noting. For example, the hybrid comes with standard perforated leather seating with orange accents, 9-inch multimedia touchscreen with embedded navigation and Bose Premium Sound System with 12 speakers, wireless Apple CarPlay and Android Auto (also standard on EX-L), and two rear seat USB-C charge ports.

On the outside, the hybrid is the only 2023 CR-V to receive black 19-inch aluminum wheels, a chrome exhaust finisher, black roof rails, hands-free power tailgate, and a rear camera washer.

Recently, Honda invited a handful of journalists to California to sample the new CR-V Hybrid, and there are a few things to note before diving in. 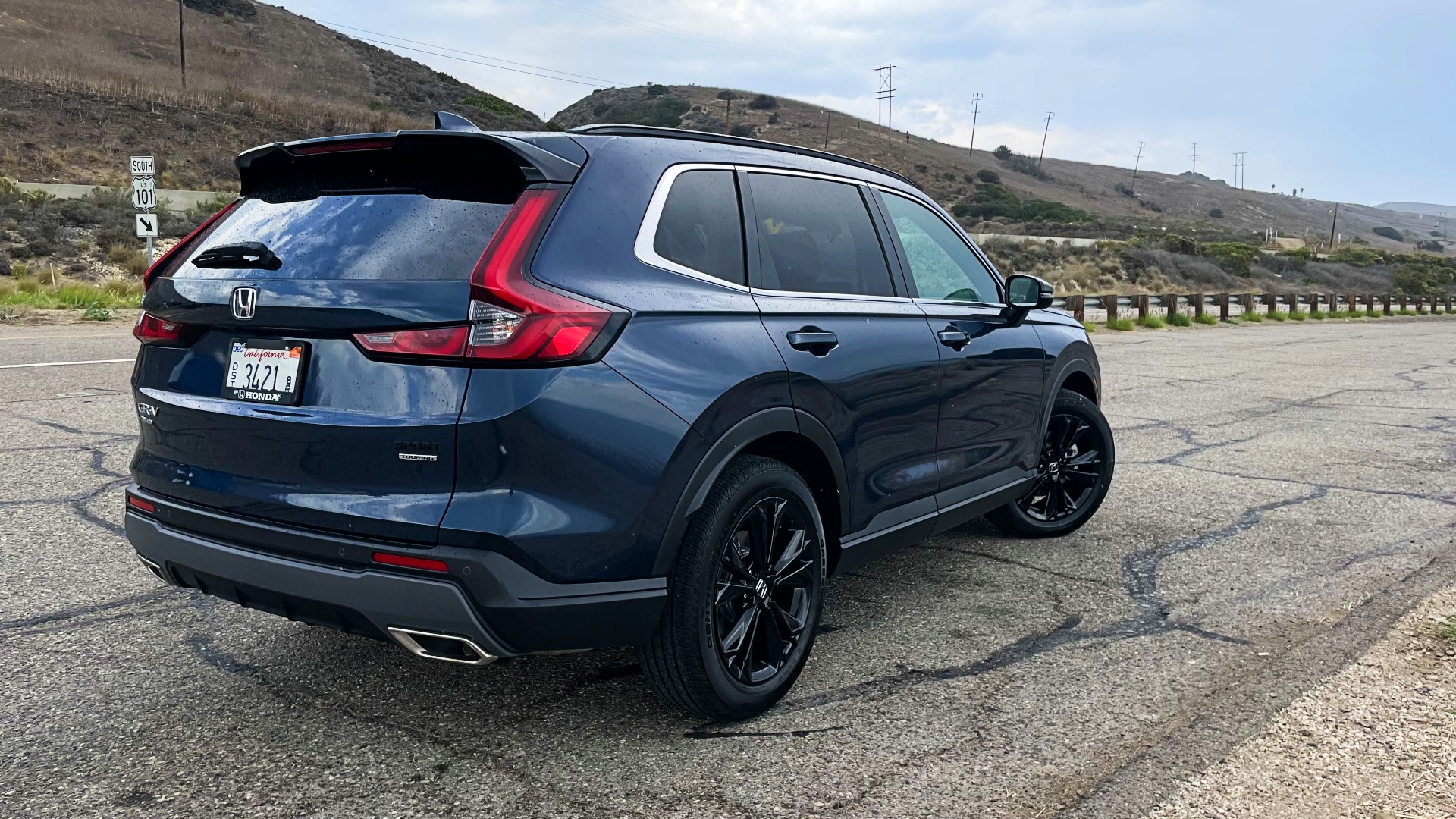 First, the car I drove is a U.S. pre-production unit (built-in Alliston), which is badged as a Sport Touring. Secondly, Sport Touring doesn’t exist in Canada but is roughly equivalent to the Touring grade Canada will receive. Finally, the U.S. is offering two CR-V hybrid grades (Sport and Sport Touring), while Canada will launch with the Touring only.

The drive route, which began in downtown Santa Barbara and wound northeast from Highway 101 to California State Route 154 up to Zaca Mesa Winery, north of Los Olivos, was roughly 100 miles (160 km) roundtrip and took about half a day to complete.

The roads were a mix of highway and two-lane blacktop, which wound through mostly rural parts of central California with many farms and wineries dotting the rolling landscape. It was warm and sunny (low-70s F / mid-20s C) for most of the drive, but the skies darkened, and some rain began to fall as I was snapping a few photos along the Pacific Coast Highway on the way back. 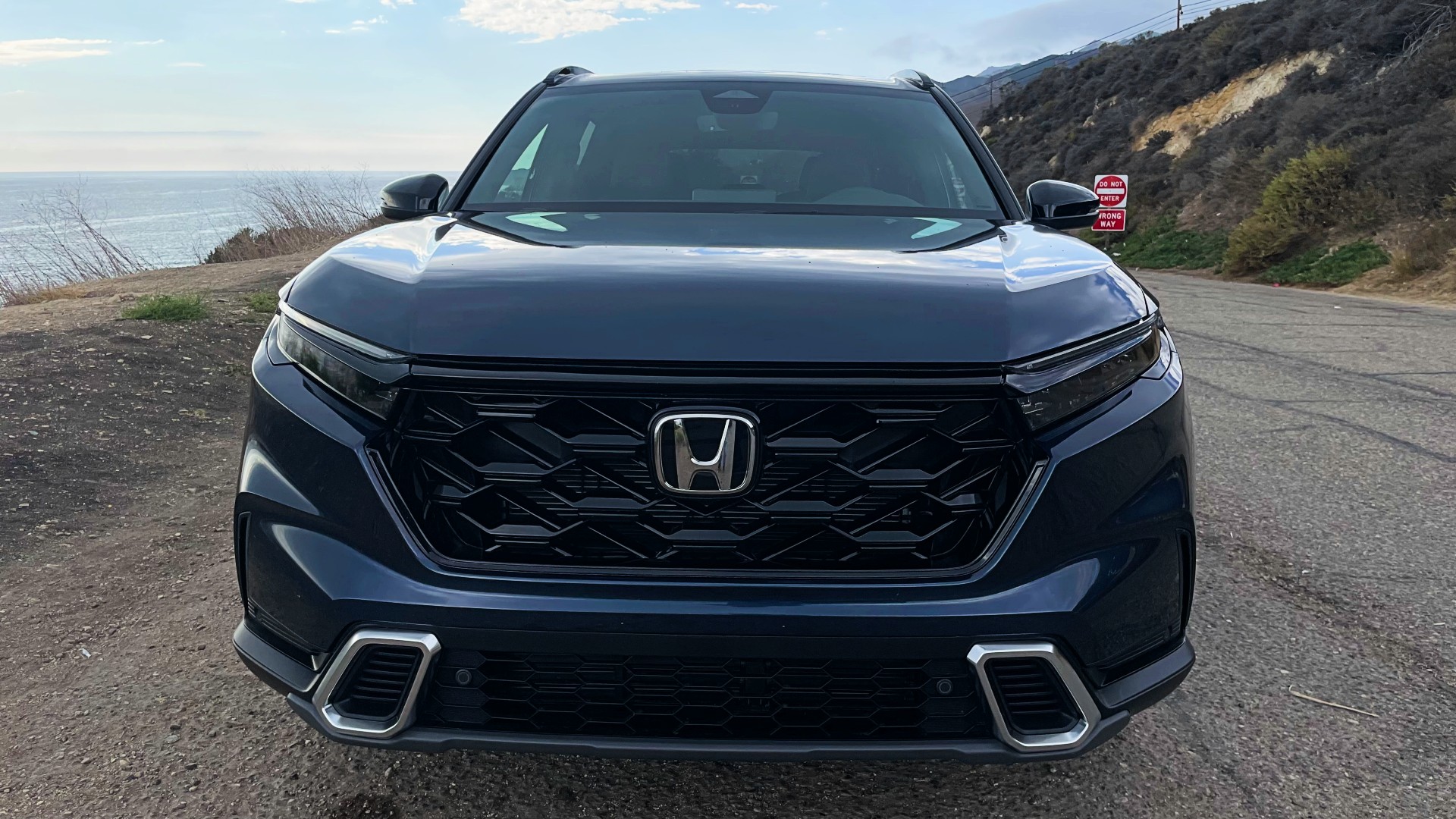 I’ll end the suspense – the CR-V hybrid acquitted itself well on all surfaces, in all driving modes. What struck me most is just how quiet and compliant the ride is, thanks to all the chassis stiffening and sound insulation Honda has packed into the car. Steering isn’t super weighty, but it’s responsive enough for the platform and the type of driving many CR-V hybrid owners will be doing.

The cabin’s touch points and general comfort are even more luxurious than in the EX-L I drove in August, with richer leather seating surfaces, a big 9-inch multimedia touchscreen, more piano black trim panels, and favourite tech features such as wireless Apple CarPlay and Android Auto and wireless smartphone charging.

The revised hybrid system Honda deploys here delivers good acceleration and responsiveness, especially in sport mode, where sharpened acceleration, both from rest and at speed makes the car feel quicker than its SUV proportions would suggest. The one-pedal drive isn’t as impressive as others I’ve experienced in pure EVs, but it is adjustable and will help improve overall driving efficiency. 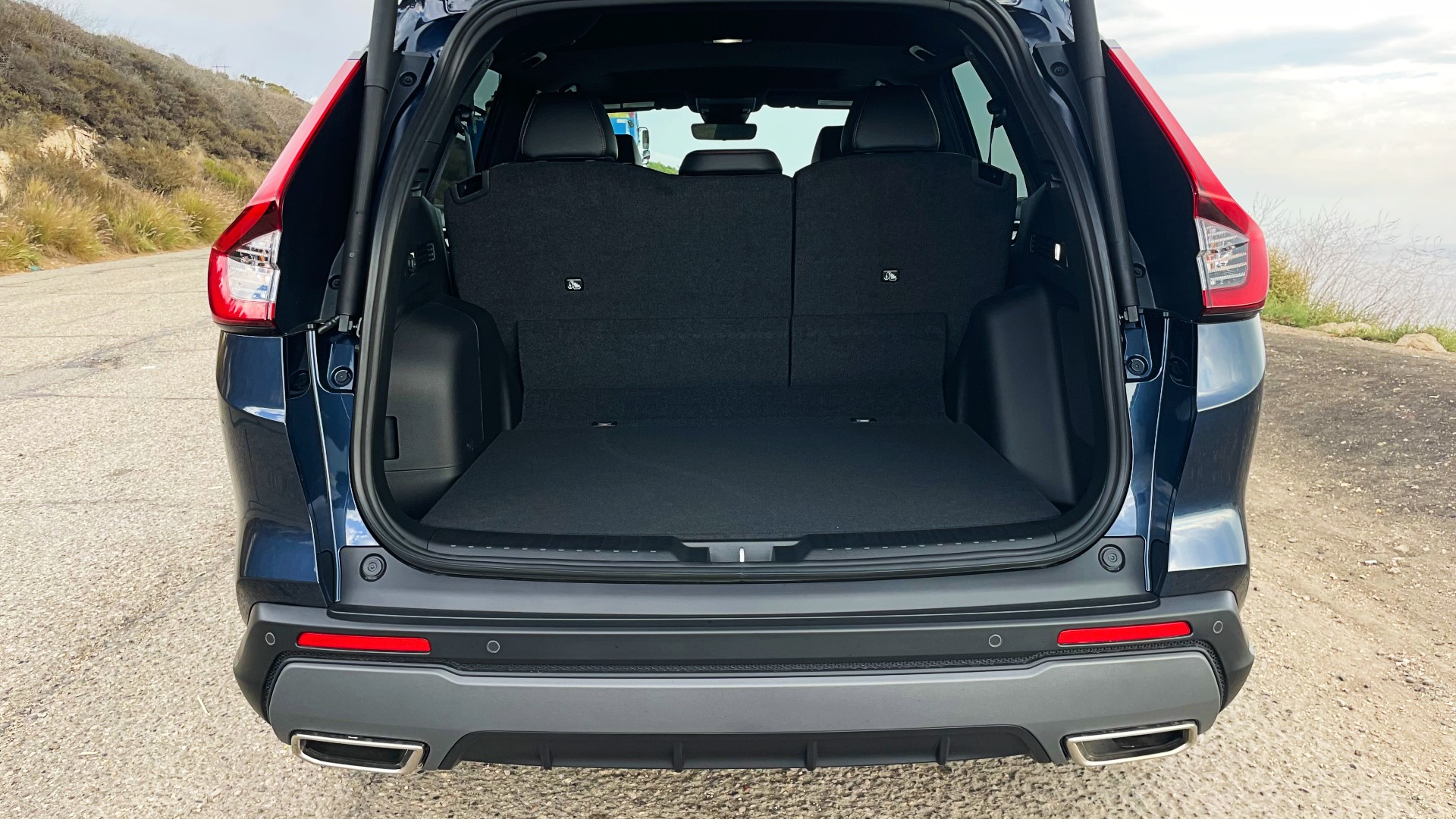 That said, the hybrid system proved to be quite efficient on the trip, even though I didn’t go out of my way to drive in the most economical manner possible. I averaged a combined 35.7 mpg (6.6 L / 100 km), which is just above Honda’s published figure, and quite efficient for a vehicle of the CR-V hybrid’s size.

Overall, there’s a lot to like here, but there’s a fly in the ointment, and it is cost. Honda says it wants the hybrid to eventually – they didn’t say when – to account for 50 percent of CR-V sales. That seems like a tall order right now.

With a $48,890 base MSRP, the CR-V Touring Hybrid is the most expensive gas hybrid in the compact crossover-SUV segment, in some instances by more than $4,000. It also costs more than several plug-in (PHEV) models. The lack of multiple hybrid trims – Toyota sells five RAV4 hybrid grades in Canada – could also weigh it down in a hyper-competitive segment. 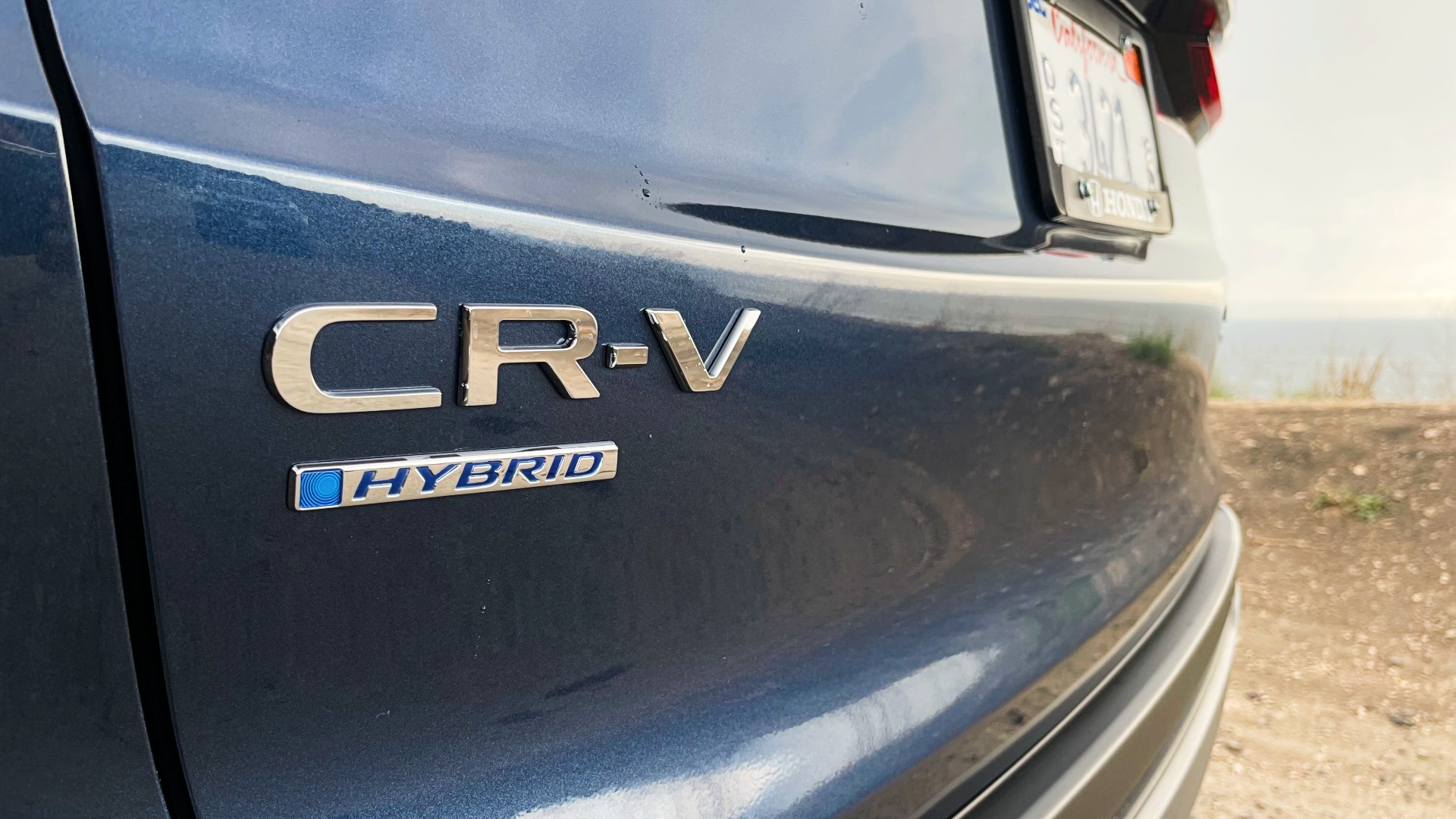 I can appreciate Honda’s desire to make the Touring Hybrid the ultimate CR-V, but its near $50,000 price tag, which, incidentally, is more than the point of entry for bigger Honda SUVs, like the Passport and Pilot, could be a bridge too far for some intenders. Interestingly, the U.S. offers two CR-V hybrid options that are spaced about $6,000 USD apart.

But for now, Honda Canada is sticking to the top end of the market. Could lighter content models fill the void at a lower price in the future, which was in the air while I was in California? Perhaps, but until then if you want a compact SUV fuel-sipper hybrid with a Honda badge be prepared to shell out.

The 2023 Honda CR-V Hybrid goes on sale later this fall.