Join the Conversation (0)
LOS ANGELES, CA – There’s something indescribably mesmerizing about a true luxury performance wagon. Perhaps it’s because of their rarity. Or the audacity of mashing together such opposite ends of the auto market universe, like a ballet dancer doing a number with The Rock. Or perhaps it’s because it’s such a popular answer to every enthusiast’s “if you could only have one car, cost no object…” question.

The new-for-2022 Porsche Taycan GTS Sport Turismo now joins that rarified hot luxo-wagon air, along with powerful five-doors like the Audi RS 6 and Porsche’s own Taycan Cross Turismo models, which sit slightly taller and feature a touch of dirt-road body cladding to them. Sadly, the scrumptious Mercedes-AMG E 63 S wagon appears to have left the Canadian market, leaving the 500-plus horsepower super wagon market as a family feud between different branches of the Volkswagen Group.

Like the all-electric new Taycan GTS sedan, the GTS Sport Turismo is a track-tuned EV that lands between the 4S and Turbo in price and power, but uses software-detuned versions of the Taycan Turbo’s front and rear motors to send 509 hp to all four wheels. Dial up launch control by simply selecting Sport Plus, then hold your left foot down on the brake while flooring the accelerator, and up to 590 hp (and a crazy 627 lb-ft of instant torque) will be unleashed when you lift your left foot in this overboost mode.

It will fire the GTS from zero to 100 km/h in 3.7 seconds, according to Porsche. You really want to keep your head planted back on the head restraint when testing this likely pessimistic figure, as it literally strained undiscovered fibers in my neck the first time I tried it. 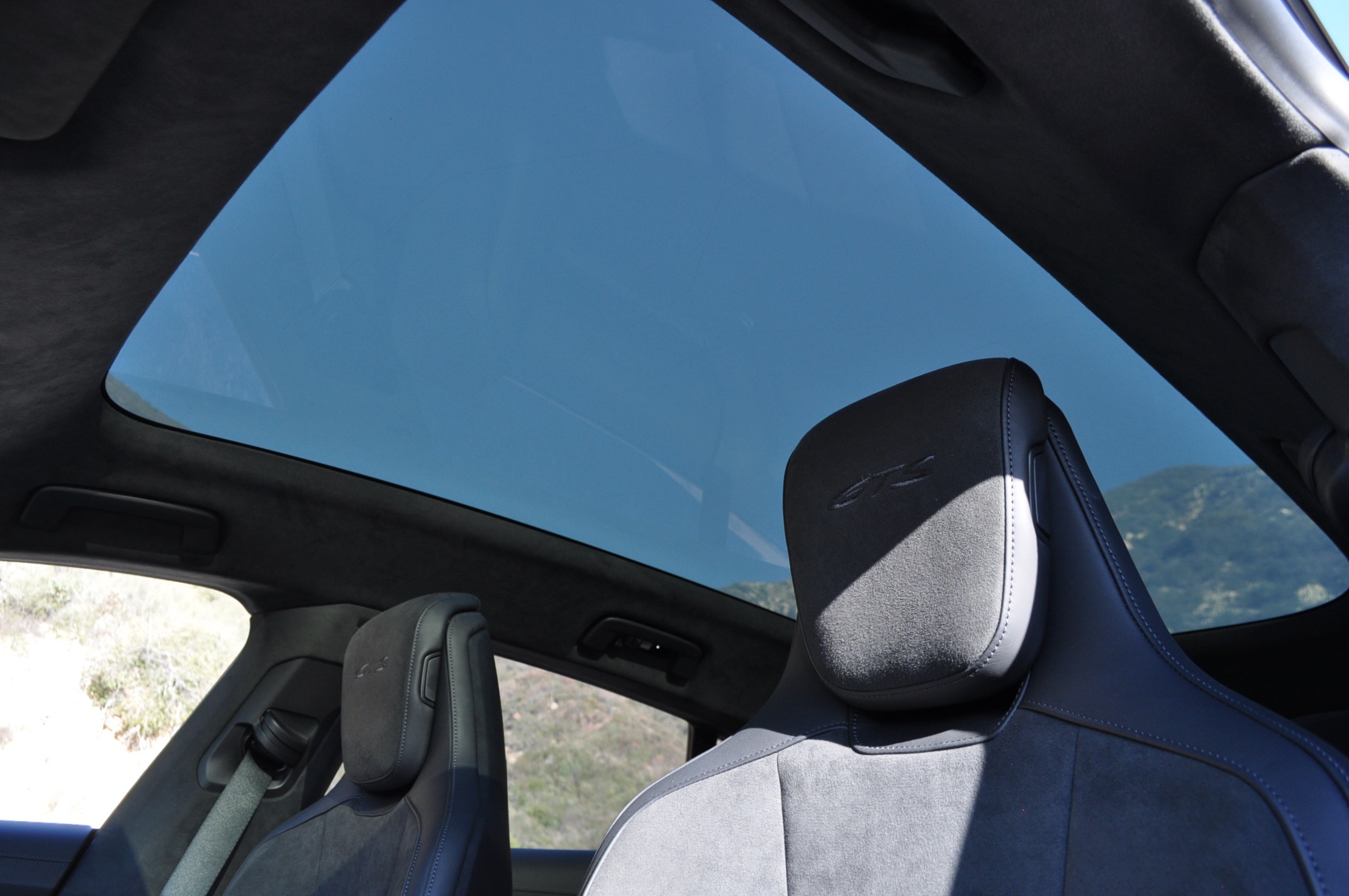 Its GTS-embossed head restraint was one of various visual differences of the GTS model inside, where its Alcantara-like Race-Tex seats were smooth and luxurious to the touch. That said, after a long day of attacking mountain road apexes, they felt like someone had invisibly turned on the heated seats to medium broil. Outside, one can spot a GTS by its blacked-out lettering, unique black SportDesign front bumper, red brake calipers, and subtle GTS lower bodywork by the rear fenders.

New on the Sport Turismo as well is a high-tech optional panoramic roof. It doesn’t open, but provides a unique electro-liquid crystal way of lightening up to near transparency to enjoy extra vitamin D plus views of the sky, mountains, or trees (fall colours drive anyone?), or shifting instantly to a cloudy white closed mode that still allows in some natural light, but offers extra privacy and sun protection. And unique in the industry, the roof’s nine panels can be individually adjusted to bring in more or less light. 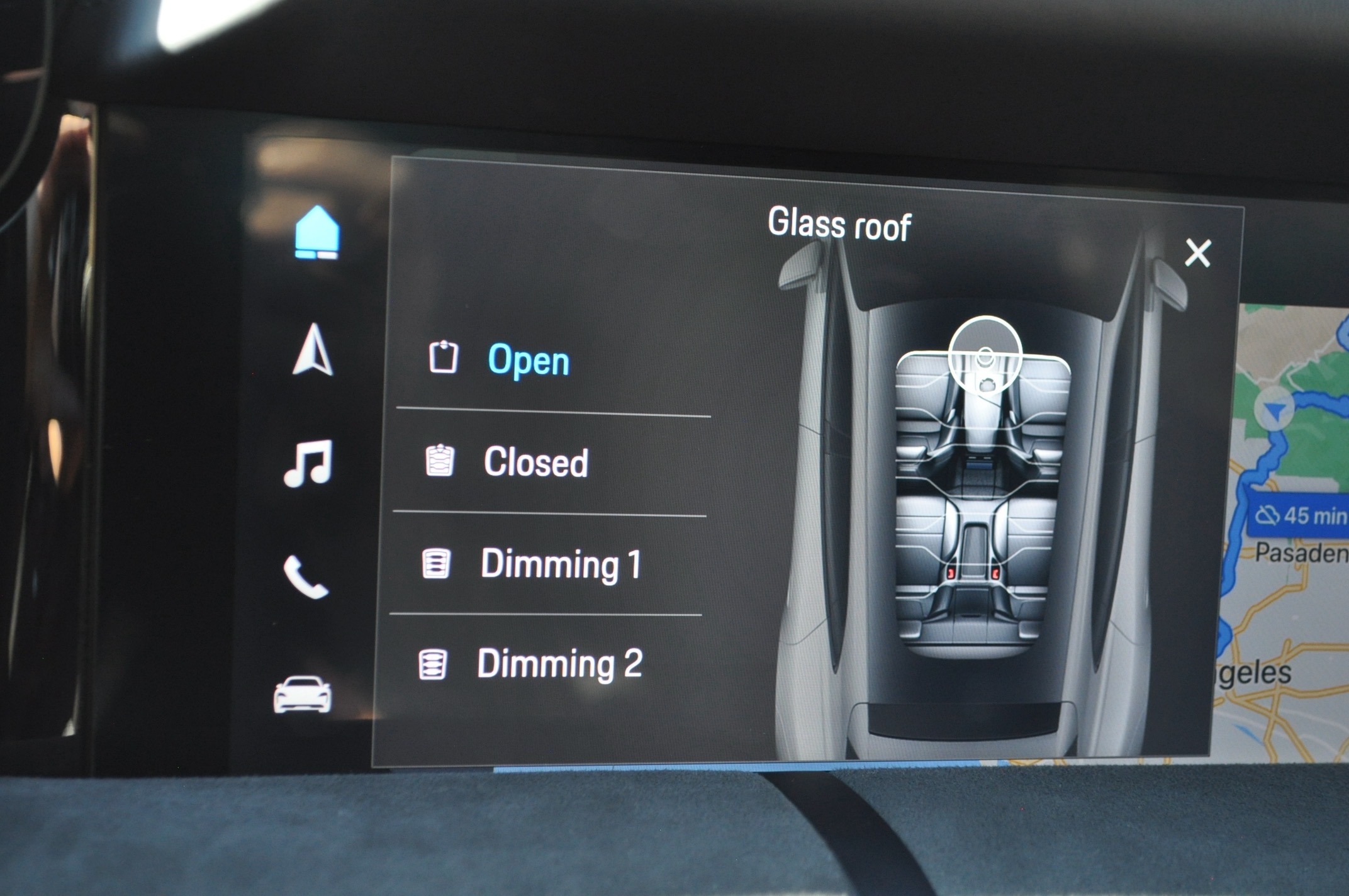 The Taycan’s Sport Turismo body offers nine more centimetres (3.6 inches) of headroom than the Taycan sedan, and that larger and more practical cargo area allows for larger gear or packages, especially if you fold down the rear seats. Like all Taycans, this is more sports car than roomy family hauler, as Porsche admits the rear is really a 2+1 setup, given that the centre seat is raised, hard, and directly in front of an optional rear entertainment centre.

And while headroom in back is also better in either the Cross or the Sport Turismo compared to a Taycan sedan, the deep “foot garage” carved out of the battery shape under the car’s floor still means that getting in and out of the back seat involves not quite toe gymnastics, but at least an appreciation of the tight foot room.

This low-slung performance-over-all personality trait can be seen in the curved, coupe-like roof profile, which actually gives the Sport Turismo just a touch less cargo room than the sedan, until you fold the seats. The brand power of the classic 911 shape looms large here, even in this traditionally boxy market segment. 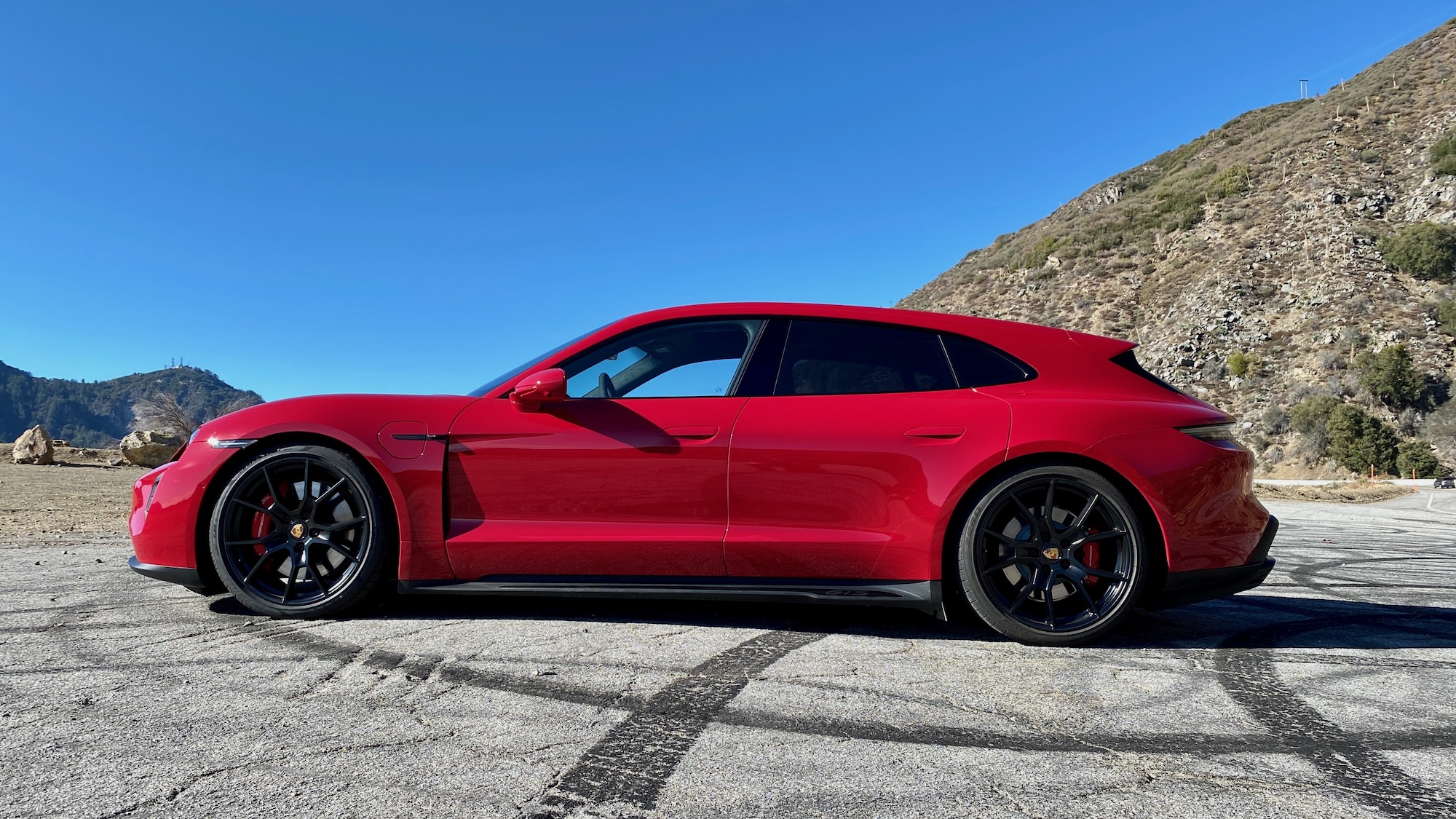 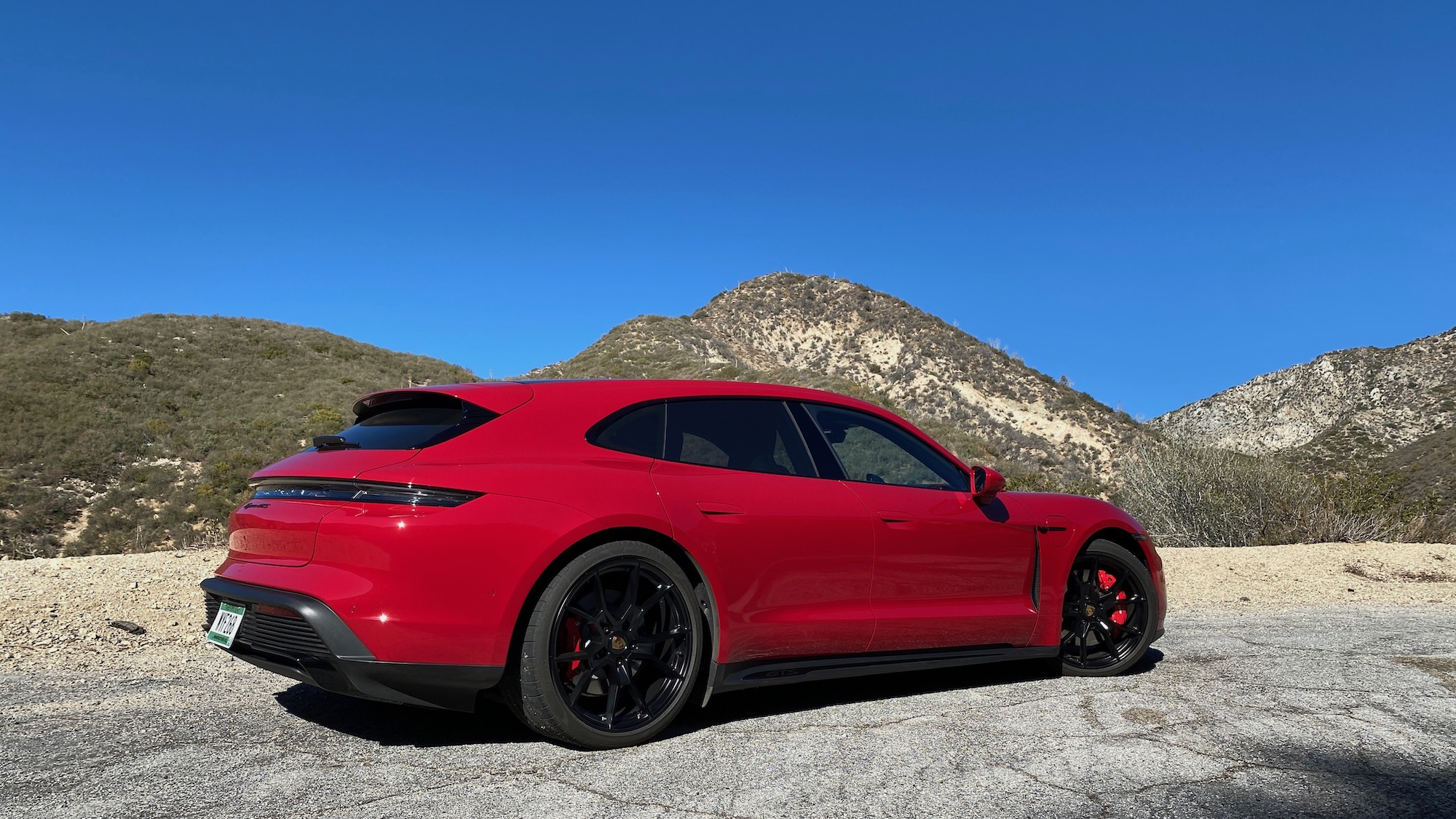 Underneath that more practical yet sleek five-door body, the Taycan GTS comes with a 93.4 kWh battery that for 2022 offers slightly more range, thanks to the all-wheel drive’s ability to decouple the front tires when not needed. This change alone will offer roughly 20 km more range to all 2022 Taycan models, but arrives on the GTS first, said Klaus Rechberer, director of powertrains on all Taycans, at the GTS first drive event.

Official North American range figures will be available closer to when the GTS first arrives around March 2022, but is estimated at up to 504 km on the more optimistic WLTP scale.

The Taycan is still one of the quickest-charging vehicles on the market, at up to 270 kW DC, and Rechberer says the system will allow it to reach (or at least approach) these top charging speeds more often and at higher states of charge. A quick charge from five to 80 percent can be done in 22.5 minutes, he said, with no preconditioning of the battery necessary anymore. 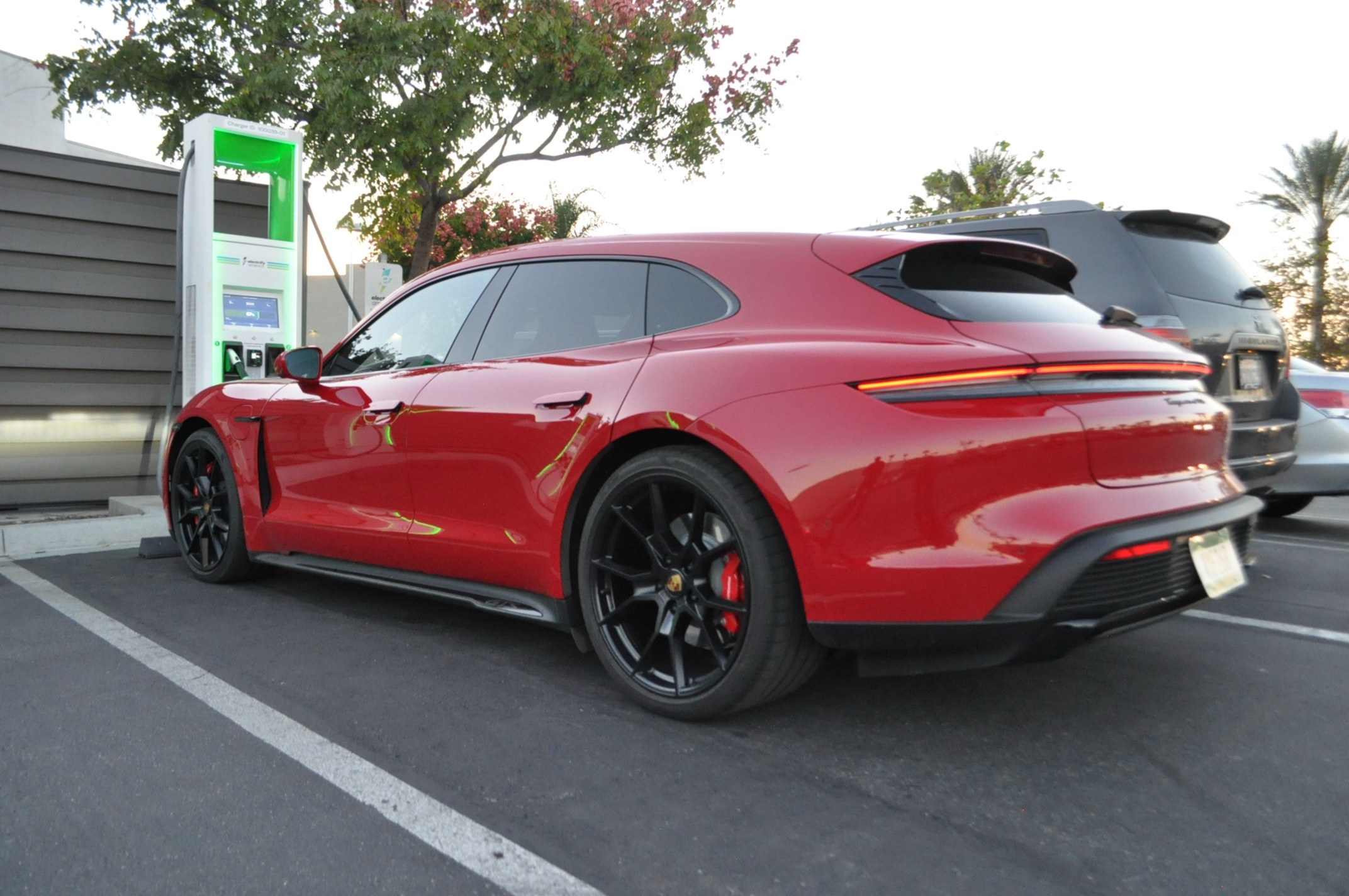 Porsche bravely demonstrated these capabilities at a quick charging stop at an Electrify America station roughly 20 minutes before our return to LA proper. I’ll deep dive into its charging curve and upgraded charging capabilities in a future piece, but it was my first time seeing the new Plug and Charge standard in action, which works just like Tesla’s Superchargers: arrive, plug in, and the high-speed whirring of this large firehose of electricity starts immediately, dumping power into the battery within 20 seconds. With a 19% charge, it reached 238 kW almost immediately.

No credit cards needed. No dongles. No apps. When the Plug and Charge system works, it’s magical.

A fitting way to end a magical day of driving. Now, to reorder that one-car dream list...