MX30 is down on range, but still delivers the “zoom zoom”.

Join the Conversation (1)
I’m going to tell you a tale. A tale about a small, hard-working company that has pulled through thick and thin for over 100 years to stay relevant today with very little outside help, very little requirement for benefactors.

Indeed, Mazda has come a long way since producing cork (more on this in a minute) and other materials, on to developing small, pop-gun three-wheel service vehicles that were crucial in helping the manufacturer’s hometown city of Hiroshima, Japan recover after one of history’s worst-ever war disasters, to funky cars powered by rotary engines, elegant coupes, and small rear-wheel-drive roadsters that continue to be built today even though most of the competition has completely backed out of the segment.

In short, Mazda has always done things differently. Which, as it happens, remains the case with this: the MX-30 EV, the first vehicle of its kind Mazda has ever sold in North America. Well, parts of North America, anyway. In its first year, you’ll only be able to get one of these if you live in Quebec, B.C. or California.

It comes in two trims – GS ($42,150) and GT ($47,150); there’s no base GX models as seen in other parts of the Mazda line-up, but according to the manufacturer, anything with that label wouldn’t have the feature set that most EV buyers would need. 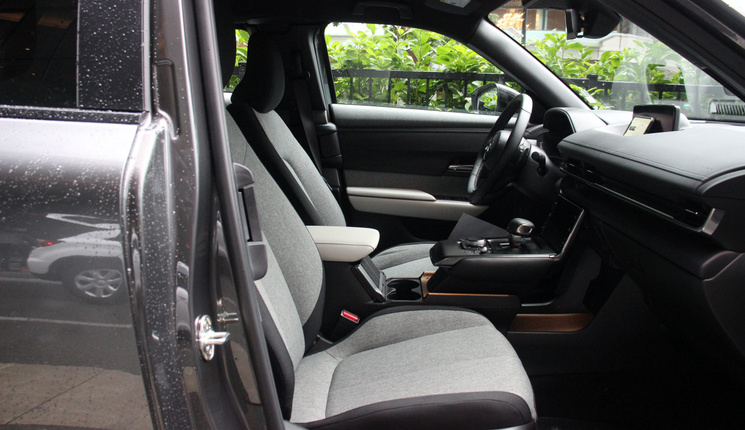 Before we go any further, let’s get the elephant out of the room right off the top: the range Mazda is claiming for the MX-30 is less then pretty much all of the competition, falling closest to the Mini Cooper SE…and a first-generation Nissan Leaf. There is good reason for that, however, which we’ll get to in a minute.

For its part, the MX-30 shares many bits – suspension, some body panels, some interior parts – with the CX-30 crossover. However, in its final production form, the MX-30 looks different from the CX-30 in that it isn’t really a four-door, more a 2.5-door as the two back doors are reverse hinged, like you used to get on the RX-8 sports car. Remember: they do things a little differently at Mazda.

It also gets a neat-o contrast-colour roof option, which is not something you can get in any other Mazda. The result is a small crossover that, coupled with a more sloped roofline towards the back, looks more like one of those four-door coupes we’re hearing so much about these days from other manufacturers, mostly of the luxury variety, and mostly from Germany. 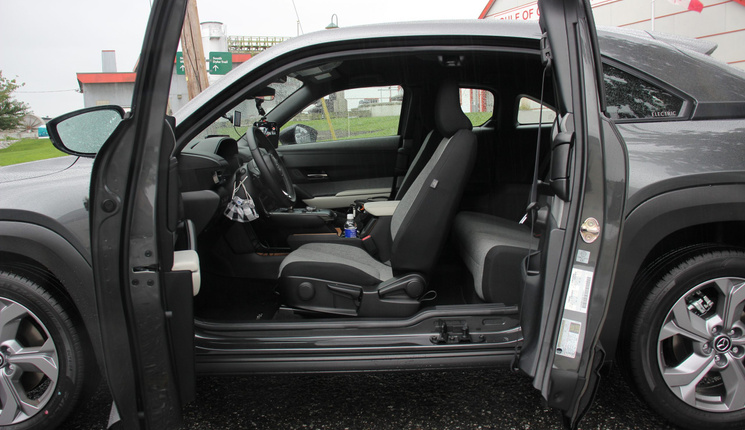 According to Mazda, the only area where any room was lost to the CX-30 is a little bit of rear seat headroom. It’s a front-wheel-drive (FWD) vehicle so there’s no need for a driveshaft to the back wheels, and the batteries are fit mainly in the floor below and under the rear seats, so they don’t infringe on in-car space, either. That’s a good thing because if we’re honest, the back row in the CX-30 isn’t the roomiest place to begin with.

What you don’t get, however, is any type of storage beneath the hood as you do in a Ford Mustang Mach-E. The power unit is there and even though it only takes up about a third of the engine bay – you could see right to the ground below, if they didn’t have a panel there -- they have to allow for the eventual installation of a plug-in hybrid powertrain and the gas engine that requires. That PHEV represents the next step in Mazda’s electrification, which will touch all aspects of the line-up from this point on.

In terms of interior styling, the sheer variety of materials used alone is quite something. The brown you see under the shift lever? Cork – just like Mazda used to produce. The seats are made from 20 per cent recycled materials and then there are the more traditional plastics and synthetic leathers. That’s all part of the march towards Mazda’s “Sustainable Zoom-Zoom 2030” vision that has carbon neutrality by 2050 as one of its end goals. Then you’ve got the partially digitized gauge display as standard, as well as the latest generation of Mazda Connect infotainment, which is available in just three models in Canada.

The driving position is good. I didn’t feel as tilted back here as I did in the CX-30 and the view out is mostly good, even through the rear window which doesn’t look all that large. The back seat is fine for child seats and kids, but I wouldn’t ask adult passengers to ride back there for very long. At least the reverse-door help access. 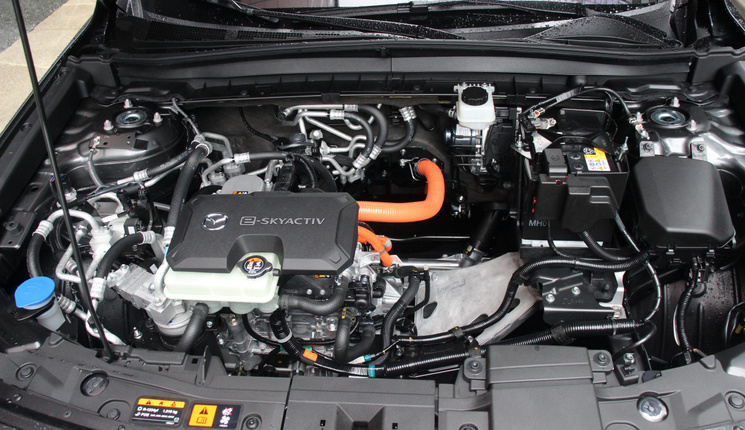 In addition to using those natural and recycled materials inside, we come full circle to why Mazda feels their battery capacity – 35 kWh, for a claimed 161 km of range – is integral to the Sustainable Zoom-Zoom mantra. Smaller battery size means less weight, and less of a carbon footprint and while Mazda isn’t hiding from the fact that range is item #1 on the punch lists of most perspective buyers, their research also shows that most EV owners also have a second car for longer journeys. As long as your day’s commute isn’t too long and you have a level II charger at home – which, according to Mazda, most do – then that range becomes less of an issue. Not to mention that during my test, my fully charged vehicle showed 190 km and throughout my drive, I saw a 1:1 km driven/km used ratio. The conditions weren’t ideal, so we had to use other energy-sapping things such as a defroster, heated seats and so on.

And the MX-30 does perform, especially in the handling sense where steering response is spot-on, and passenger comfort is kept nicely in-check thanks to an advanced version of Mazda’s G-Vectoring Control, or GVC. It’s called e-GVC here for obvious reasons; GVC requires a form of power distribution only accomplished with a traditional transmission – which the MX-30 doesn’t have – and these days in the mobility world, we all know what “e” means. Plus, Mazda used an electrified version of the Japanese market Mazda2 to develop GVC.

With e-GVC, the brake regeneration system is also used to meter out the power delivery when you start to turn the wheels, in an effort to keep the car balanced, responsive and the occupants more comfortable inside as a result. And it works a treat, as the MX-30 rides more luxuriously than its segment-type suggests it should. 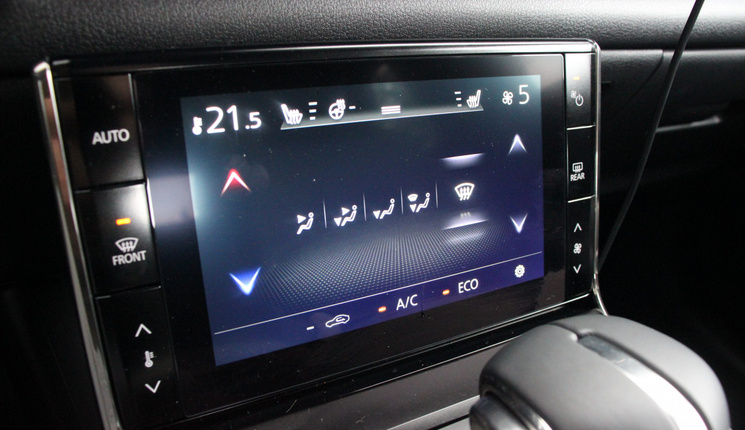 Speaking of brake regeneration: the paddles either side of the wheel don’t shift gears as they normally would; instead, they change how much regen is applied when you release the throttle. It’s a bit of a “less is more” thing because flipping the paddle marked “-“ actually adds more regeneration, but it makes sense once you get used to it.

I have to admit, the MX-30 makes more sense the more I think about it, assuming what Mazda says is true and most that are going to buy these won’t be as bothered by the range as someone buying a larger EV vehicle. As a fun-to-drive city vehicle – just like the Cooper SE – it’s right on the money and it delivers on Mazda’s Zoom-Zoom ethos. The “e”-ness, here, is the cherry on top.