The future is electric

Join the Conversation (0)
SCOTTSDALE, Ariz. – The compact Lexus NX crossover, which will begin landing in second-gen form late this year, marks a significant sea change for Toyota’s luxury brand, even if the car appears, at first blush, to be just another new SUV.

After all, the NX has existed mostly in the shadow of the bestselling Lexus, the mid-size RX crossover, for the past seven years. The former is the no. 2 selling Lexus in North America, available as either a gas or gas-hybrid model, but despite selling loads of units, it didn’t occupy that pride of place in the lineup, unlike the RX, which is easily the most well-recognized Lexus model on our roads.

The NX was just kind of there, marking the time. Yeah, it was facelifted in 2018, but you’d be forgiven for not remembering, given the car’s mechanicals have remained unchanged, and its styling has evolved only by degree.

That feeling was in my mind when I drove the outgoing (2021) NX last December for Wheels. Sure, it’s a mostly fine crossover, I thought, albeit one that was showing its age, with road manners that were good, but not awe-inspiring. I noted at the end of that review, however, that a model change was likely on the horizon given Toyota’s decision to move its manufacturing to Cambridge, Ontario, alongside the RX and RX hybrid. 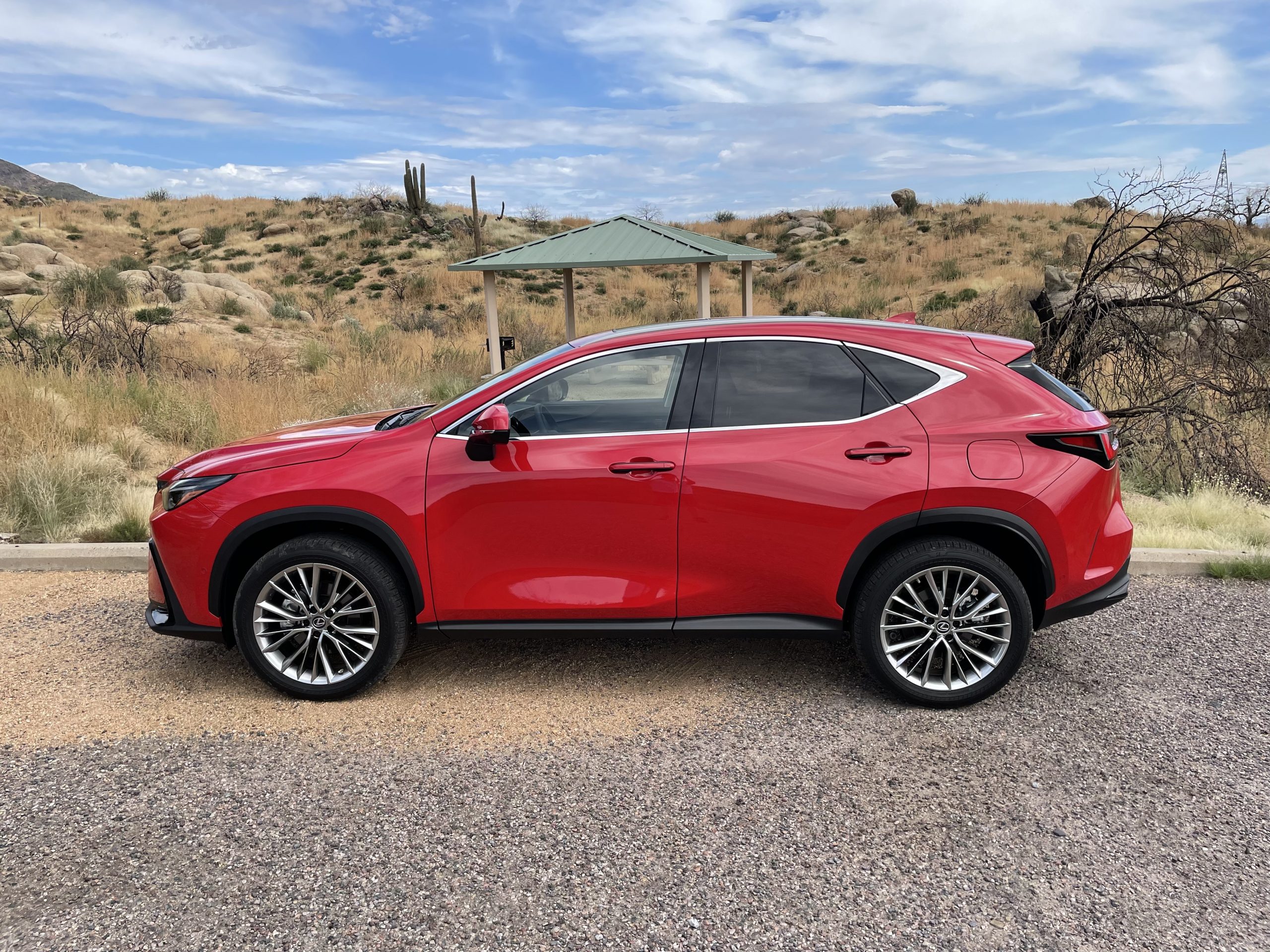 Change felt overdue, in other words, but what Lexus has done to the NX, goes far beyond what I would have predicted. As I discovered in Arizona on a recent first drive, the new car is a significant departure from what came before, from both a technological and mechanical standpoint. The model range has also been expanded and reorganized.

The big, above the fold headline for the NX under the hood are new powertrains; there are now four. Whereas the outgoing gas model (300) was powered by a 2.0-litre turbocharged four-cylinder (235 hp / 258 lb-ft) paired with a six-speed automatic transmission, the 2022 NX 350 receives a 2.4-litre turbocharged four-cylinder (275 hp / 317 lb-ft) mated to an eight-speed automatic with full-time all-wheel drive. According to Lexus, the new 350 is half a second quicker in zero-100 km/h testing (6.8 seconds), than the outgoing 300. 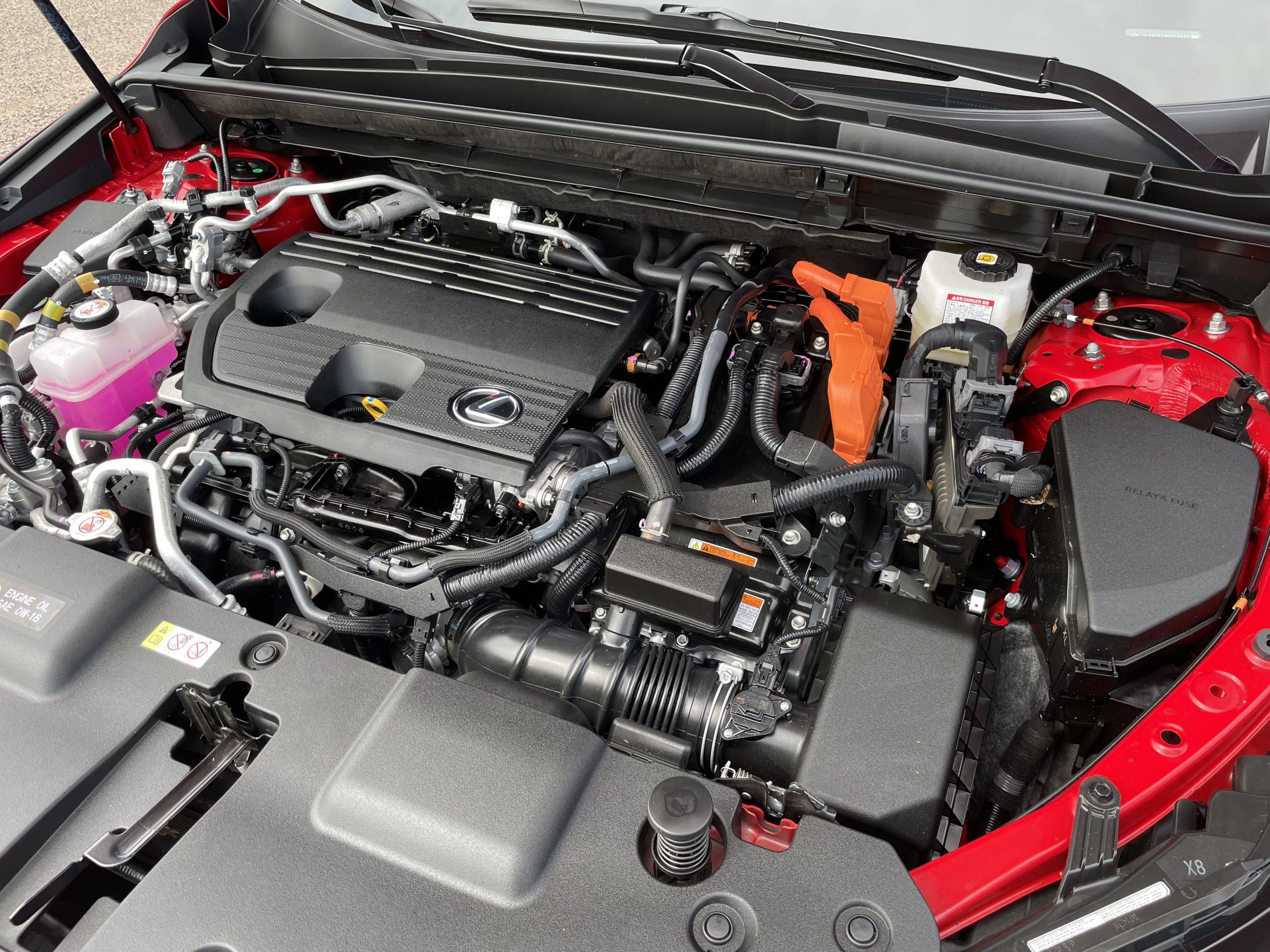 But unlike the first gen model, two gas engines will be available for the 2022. The all-new entry-level NX 250 will offer intenders a 2.5-litre naturally aspirated four-cylinder (203 hp / 184 lb-ft) mated to the same eight-speed automatic transmission and standard on-demand all-wheel drive.

For those seeking a more efficient hybrid powertrain, Lexus is outfitting the new NX with more choice on that front, including a first-ever plug-in model.

Like the first gen model, the 2022 NX will be available as a gas-hybrid model. The 350h will be powered by a 2.5-litre four-cylinder engine paired with the Lexus Hybrid Drive system, which uses two high-torque electric motors and a lithium-ion battery pack that’s mated to an electronic continuously variable transmission (CVT).

It’s on-demand all-wheel drive system, which is powered by an electric motor instead of a driveshaft, is standard. Total system output is rated at 240 horsepower, which marks a 43 hp gain over the outgoing 300h model. Not that performance is vital for these models, but Lexus is reporting the 350h is 1.5 seconds faster (7.4) than the 3.0 in a zero-100 km/h testing.

Finally, and perhaps most significantly, the 2022 NX will be available as a plug-in hybrid, which is not only a first for the NX, but also a first for Lexus. 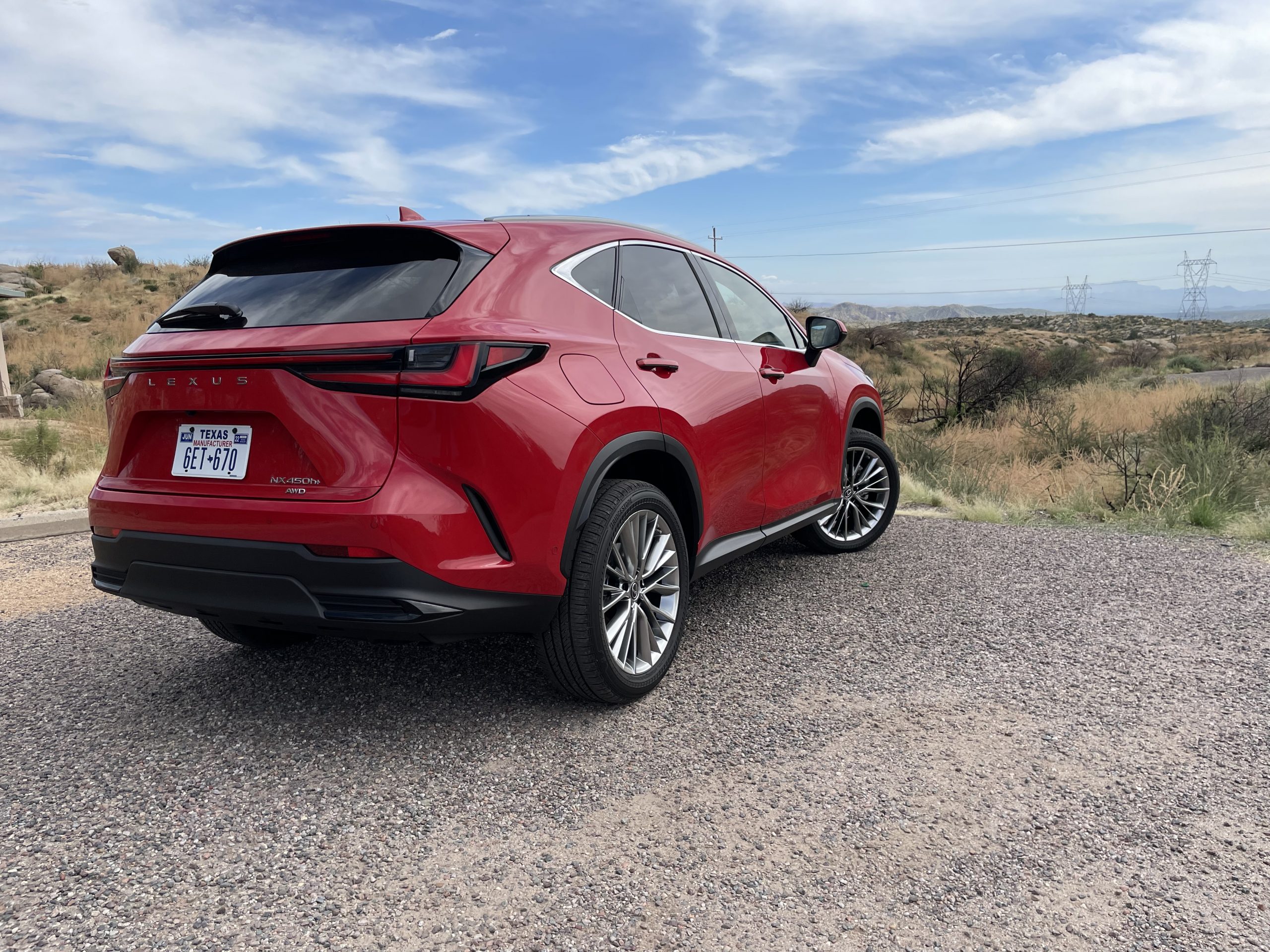 The 450h+ (the + will be a designator for Lexus plug-in hybrid models moving forward), is powered by a 2.5-litre four-cylinder engine that works in conjunction with electric motors and a high-capacity lithium-ion battery pack. Pure electric range has been pegged at 61 km, with combined fuel consumption of 2.8 Le / 100 km with a full battery, and 6.6 L/100 km on a drained battery that would then draw power from the gas engine. As for charging time, Lexus has pegged it at 4.5 hours with a 240-volt charger.

A few other items of note with the 450h+: on-demand all-wheel drive is standard, total system power output is rated at 304 horsepower and, for those wondering, yes, this powertrain is essentially the same as the one found in the RAV4 Prime plug-in hybrid. The RAV4 and NX are built on a shared Toyota New Global Architecture-K (TNGA-K) platform and are therefore mechanically related.

Dimensionally, the NX is longer (+20 mm), wider (+20 mm) and taller (+5 mm) than the outgoing model, and rides on a longer wheelbase (+30 mm). Total cargo volume has been increased by 14 percent, with the rear seatbacks upright, which has been achieved partly by the adoption of run-flat tires (except on the 250), which has allowed for the removal of the spare tire, thus creating more storage space. 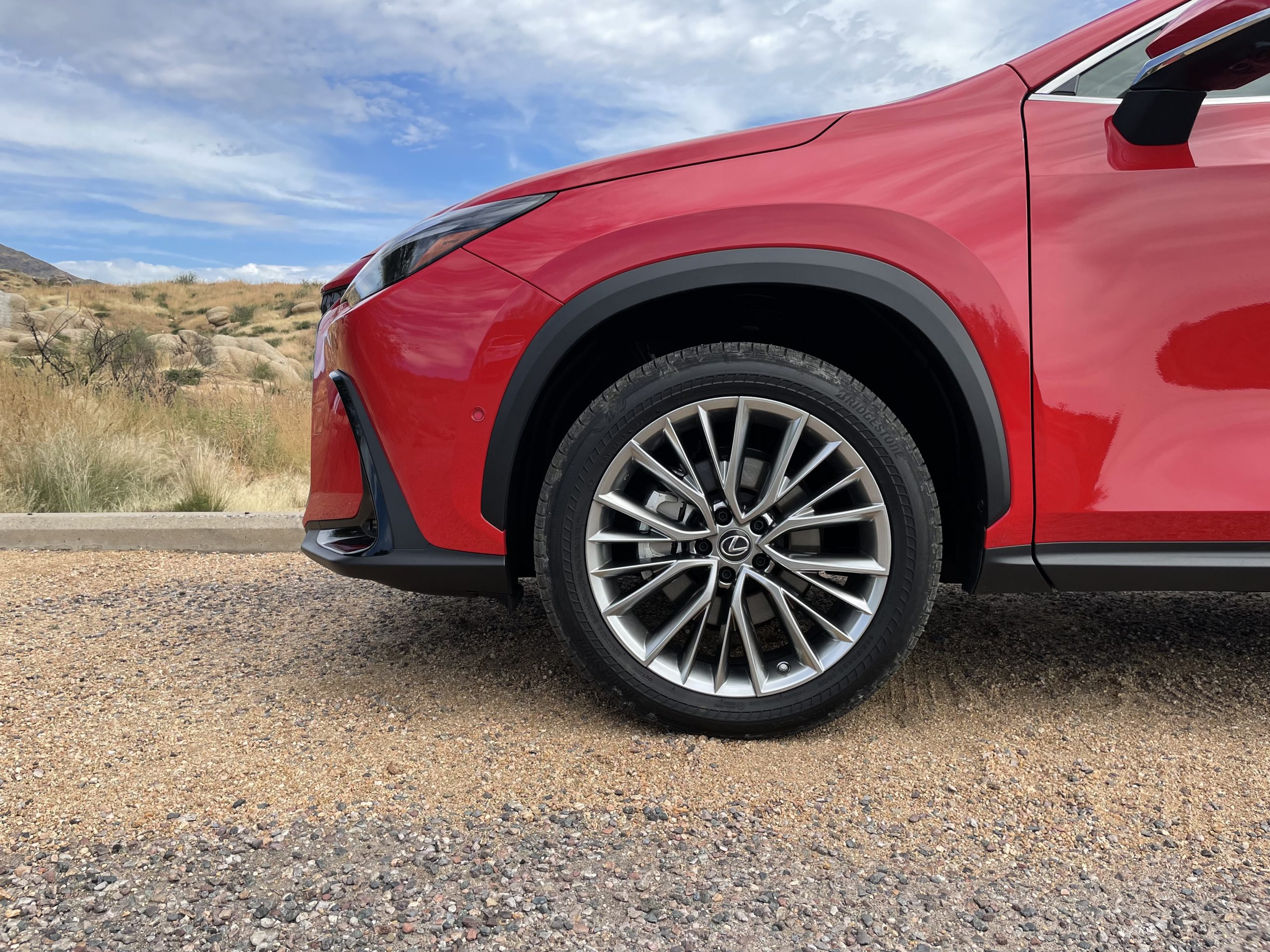 On the design front, the NX is all-new, yet it retains a familiar look which should appeal to existing owners and brand newcomers alike. The spindle grille has been redesigned, the new LED headlights have a combined daytime running light signature (first seen on the facelifted 2021 IS sedan), but I think the most dramatic changes are at the rear, where a stretched LEXUS badge and full-width taillights are dominant features. Of note, the 2021 IS also incorporates full-width taillights, making them a feature to watch out for as more Lexus vehicles are redesigned in the coming years.

In Arizona, Lexus reps went to great lengths to emphasize the four pillars the 2022 NX is built on: design, Lexus driving signature, electrification, and advanced technology.

I’ve touched on a couple of these already, but before I get to my driving impressions, advanced technology deserves a brief going over, as the NX is absolutely stuffed with it.

The most obvious item on the high-tech list is the new Lexus Interface. Basically, Lexus’ goal here is to integrate one’s digital life with that of the car. To that end, the standard infotainment touchscreen – you read that right, there’s no trackpad or mouse thingy – is 9.8 inches and uses a new human-machine interface (HMI) that recognizes a variety of inputs that come through sight, touch and voice. The system can support multiple user profiles, and through the Lexus smartphone app, digital key access can be sent to Bluetooth-enabled devices. 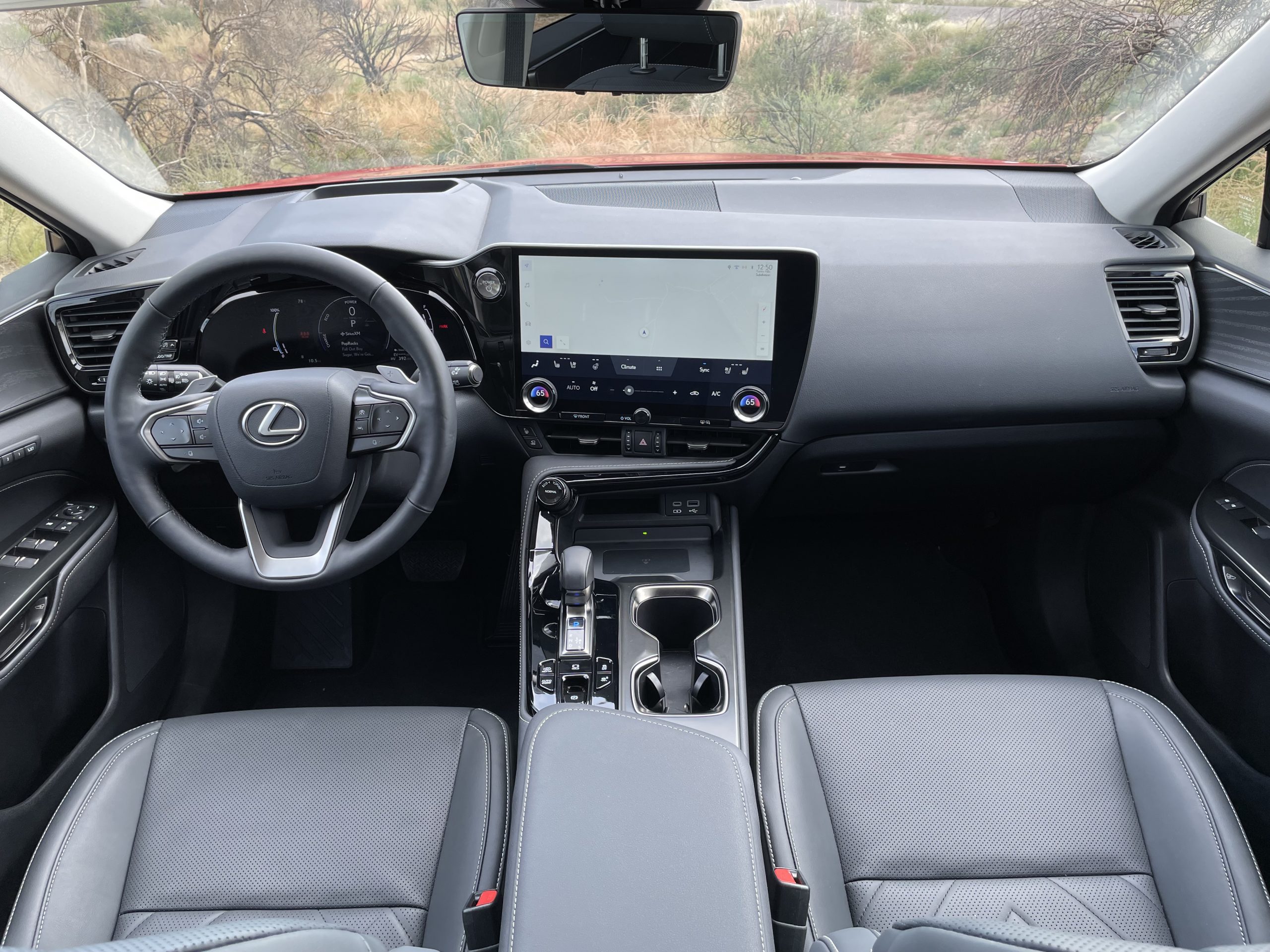 All test vehicles I drove in Arizona, which were U.S.-market pre-production units, came outfitted with an optional 14-inch touchscreen which comes with cloud navigation (which uses Google POI data), designation assist and intelligent assistant, along with a three-year trial for drive connect services.

The screen resolution and response time is quite impressive, but the performance of the virtual (Hey Lexus) assistant, along with the ability to pair two smartphones, are what impressed me most. The digital key, which enables users to lock/unlock and start/stop their NXs through their smartphones within Bluetooth range is another useful feature. Of note, all 2022 NX models come equipped with standard wireless Apple CarPlay and Android Auto. I used the former during the drive and it worked flawlessly.

Lexus assembled a variety of NX models for our group of journalists to sample. I drove the following: 350, 350h and 450h+, but missed out on the 250 as it wasn’t available.

The gas-powered 350 was outfitted with an F Sport package, but I didn’t take note of which grade. What I did notice, however, was its greater power output and more aggressive driving character, thanks to its 2.4-litre turbo and adaptive suspension. On windy, two-lane Arizona blacktop, this NX was the most engaging and fun to drive with crisp handling, sharp throttle response and good steering feedback. Plus, I really dug the blacked out trim bits and combo red/black interior. This is my NX spec if I was choosing one for myself.

As for the two hybrids, I drove the gorgeous red 450h+, as seen in the accompanying photos, first. Because it was being driven by a rotating group of journos, the battery was drained by the time I got into it so I can’t speak to its pure electric driving character or real-world range. Lexus says 61 km, so I’ll have to take them at their word for now until I’m able to spend a week driving it on fleet in the future.

What I can say, however, is the 2.5-litre four-cylinder delivered solid performance suitable for everyday driving. Suspension tuning isn’t as firm as the gas F Sport grade I drive before, but it felt reasonably responsive on public roads with a quiet cabin that was free of shuddering and excessive wind and tire noise. 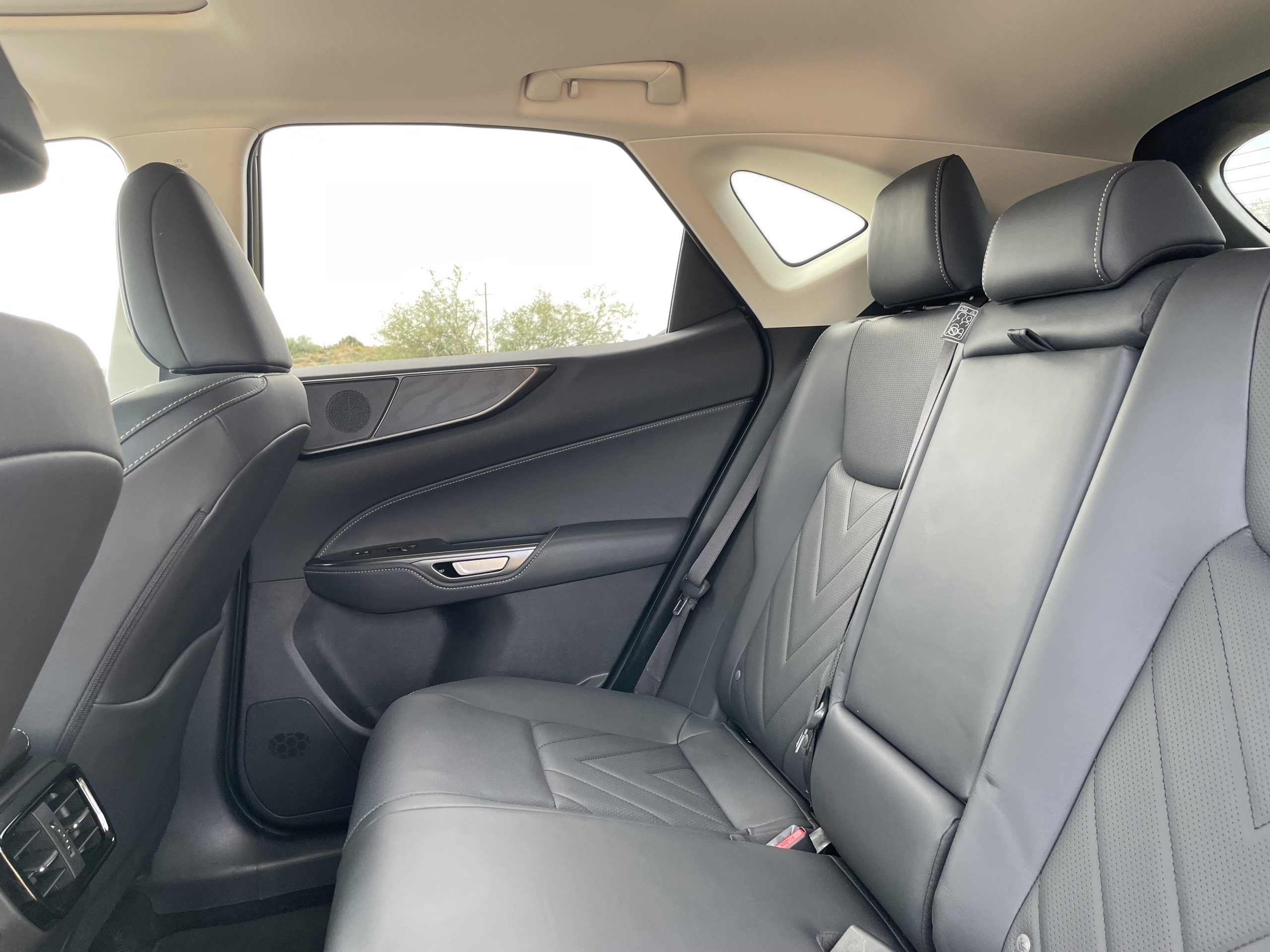 Finally, at the end of the drive, I snagged a 350h for the return trip to the hotel, a journey that lasted for about 45 minutes. Much like the 450h+, this gas hybrid cruised along pleasantly in a mix of highway and local Phoenix-area traffic, with a well-balanced ride, good throttle response and a quiet and comfortable cabin.

This applies to all NX vehicles I drove, but I can’t overstate how much I appreciate the reworking of the cabin. The 14-inch infotainment touchscreen is gorgeous, yes, and so is the digital instrument cluster, but other changes are equally impressive.

Among these is a drive mode selector knob that’s easy to find, a cell phone charge pad that’s not hidden in a console storage bin, and other controls that are close to the driver’s hands and don’t cause too much distraction. Nicely done Lexus – and yes, these features help counterbalance the annoying capacitive touch climate controls. But you kept the volume knob, so I guess we can call it a draw. One other cabin item: the e-latch doors take a bit of getting used to but work well and befit the high-tech aesthetic of the new NX. 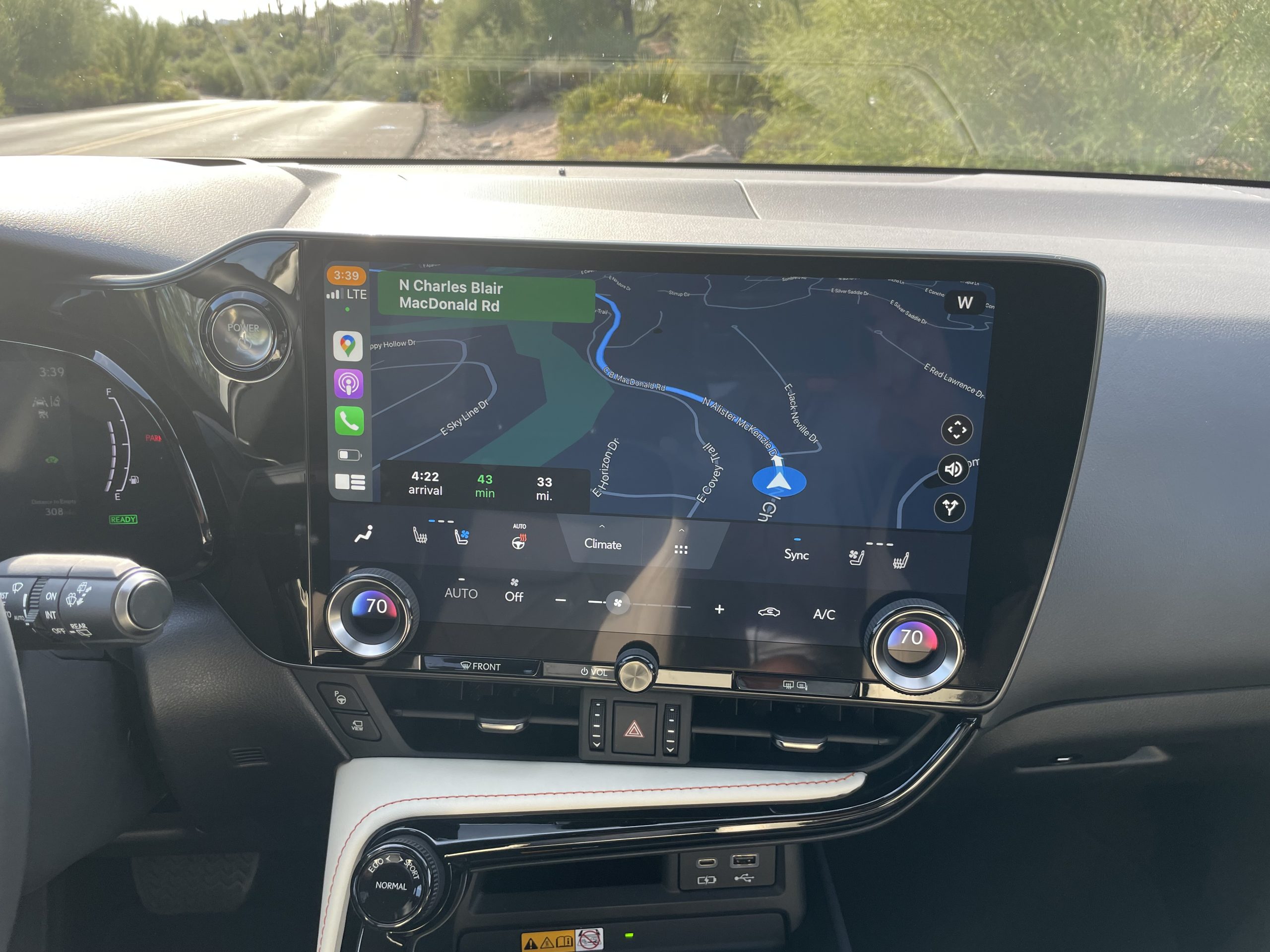 Before wrapping up I should also mention every 2022 NX also comes standard with Lexus Safety System+ 3.0, which comes with a pile of extra stuff over the previous 2.0 system, including emergency steering assist, daytime motorcycle detection, pedestrian detection and vehicle detection (when turning left) and a lot more.

I said at the outset that the 2022 NX is a sea change type of vehicle, a ‘tip of the spear’ product that will serve as a sign of things to come for the brand. Moving its manufacturing to North America (set to begin in early 2022) to serve U.S. and Canadian demand is significant to be sure, but what really caught my attention was a slide in the product briefing that indicated Lexus expects 50 per cent of new NX sales will be electrified.

This is a huge leap, as the electrified share of sales is only 20 per cent for the outgoing NX. If anyone was wondering why the 450h+ exists, you have your answer. The future for Lexus is indeed electric, and for the NX, that statement isn’t just about its powertrains.

The 2022 Lexus NX will begin to go on sale across Canada in December.