Join the Conversation (0)
LOS ANGELES, CA – Seven hundred and sixty horsepower. It’s a power figure worth bragging about at the dinner table and it’s enough to make an IndyCar blush.

Some might think it’s too much for a road car, but behind the wheel of Ford’s latest monster Mustang it feels just right. And that speaks volumes about the latest Shelby to join the stable.

Logic would dictate that sending such a large amount of power through a chassis that at its base level only has to contend with around 300 hp, would be overkill. That it would make for a lurid, slidey beast of a thing requiring the hands of Fernando Alonso to properly control.

But as I found out through the twists and turns of the Angeles Crest Highway just northwest of LA this is far from just a straight-line pony. Although, if you must lay down some black stripes a drag strip driving mode has you covered. If you care about acceleration figures the GT500 can blister to 60 mph (96 km/h) from a standstill in about three and a half seconds and blow through the quarter-mile in under 11. For a car with the engine in the front and power only going to the rear wheels, those are impressive numbers.

But before we get into how this latest and greatest Shelby drives we need to discuss its hand-built V8 signed off on by the technician responsible for putting it together.

Ford started with the 5.2-litre Voodoo engine block from the GT350 retaining much of its design but choosing instead to go with a cross-plane crankshaft instead of the flat-plane piece that gives the GT350 its unique sound and sky-high rev limit.

Modified cylinder heads are fitted with a 2.65-litre inverted Roots-type supercharger and an air-liquid intercooler nestled neatly in the between the banks. While some might question the loss of the flat-plane crank, the extra power generated by this engine negated the need for one. Consequently, the rev-limit drops from the 8250 rpm in the GT350 to just 7500 in the GT500. 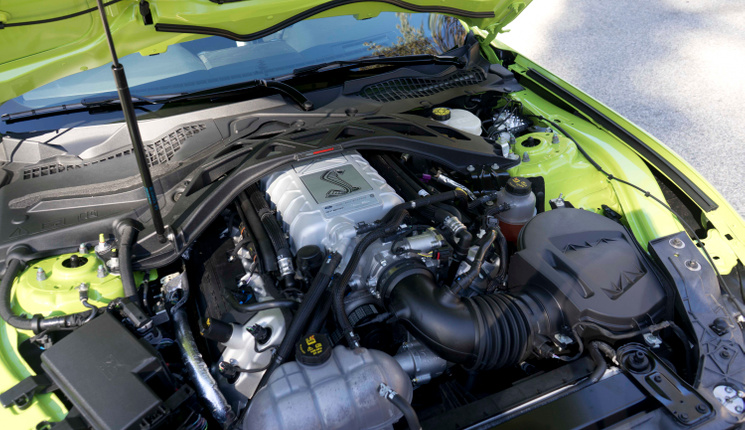 With up to 12 psi of boost being pumped in by the supercharger the end result is that thunderous 760 hp and 625 lb-ft of torque. And that gets fed through a Tremec 7-speed dual-clutch automatic—the only transmission choice. Unlike the GT350 which is only available with a 6-speed manual this new dual-clutch unit might not please purists and pony car loyalists but after just a few paddle flicks I came away convinced that it was the best tool for the job of attacking southern California’s glorious canyon roads.

Apart from making you look and feel like a much better driver than you actually are, these paddles are some of the most responsive I’ve ever had the pleasure of tugging. And that includes Porsche’s stupendous PDK, the benchmark I judge all others by.

It isn’t just the shift speed that’s impressive but also the seamlessness in which each gear is engaged. These are paddles that you actually want to pull over and over again, shifting through gears up and down just for the hell of it. Stomp on the firm brake pedal in auto mode and downshifts are aggressive and perfectly rev-matched retaining the balance of the car and setting you up to squirt out of corners. 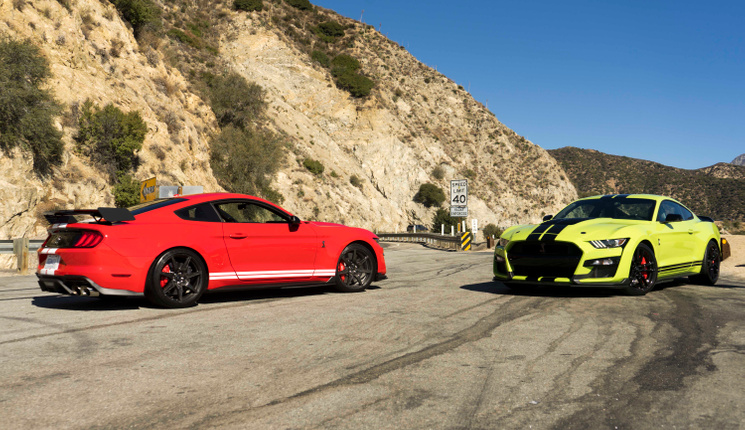 Massive two-piece Brembo binders measuring 16.5 inches up front and 14.6 inches at the back are the largest ever fitted to a domestic sports coupe so you can be assured that this Shelby stops as good as it goes.

To get an idea of how this Mustang performs you'd need a track to fully extract its capabilities. But seeing as we weren’t going to get anywhere near one of those, LA is the next best place to experience its performance, if only a tiny slice of it. After all, the city of angels is a haven for the car enthusiast, the tuner capital of the world. LA is car Mecca and it’s one of the few places on the continent where you’ll see rust-free Alfas, and LS-powered 914s intermingling with brand new Bentleys and Teslas. 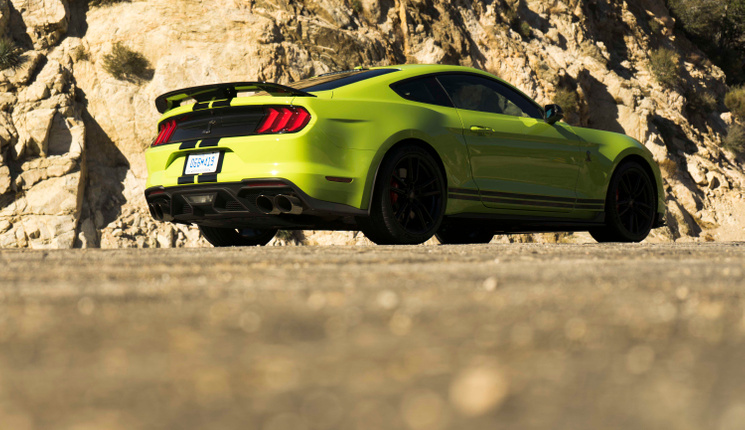 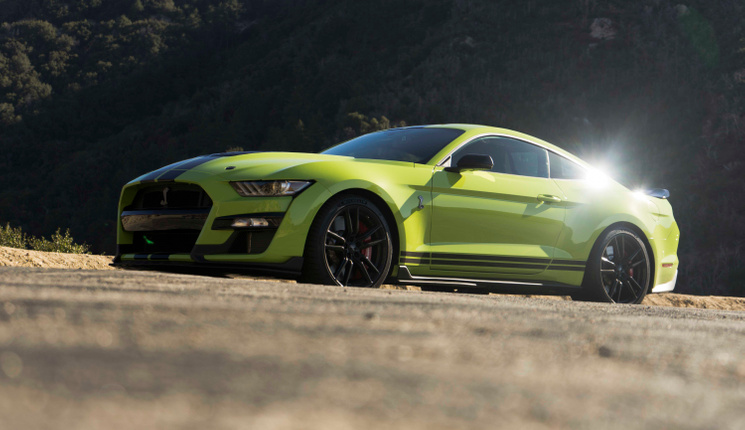 A group of us were led into the underground parking lot of our hotel and as we rounded the corner we bore witness to what might have been the largest group of new GT500s gathered together at any one time. It was a citrus fruit salad of greens and oranges and reds broken up by swaths of exposed carbon fibre weaves and racing stripes. The inner child in all of us broke through, like a 5-year-old getting his first PlayStation.

The GT500 is unmistakably a Mustang but that gaping maw is a clue to the uninitiated that this isn’t just any old pony. A full 50 percent larger than in the GT350, the open fascia conceals 6 heat exchangers to keep everything cool. Functional aero pieces like a louvered hood, a new belly pan, a redesigned front splitter, and reverse wing side skirts help efficiently channel air in and around the vehicle for better thermal management and increased downforce.

Less attention was paid to the interior, it seems, and for the most part its standard Mustang fare with the exception of some nicer materials lining the centre console tunnel and dash and a GT500 number plaque on the passenger side.

Nicked straight out of the new Escape, Ford’s rotary gearshift dial makes an appearance here and it comes across as a bit fiddly, a bit too genteel to take on the duty of unleashing three-quarters of a thousand horsepower onto the road.

Thankfully the Recaro buckets are all business, surprisingly comfortable and grippy just like the micro-suede flat-bottom steering wheel that, if anything feels, a bit too large in diameter for my liking, a gripe that I have with all Mustangs. 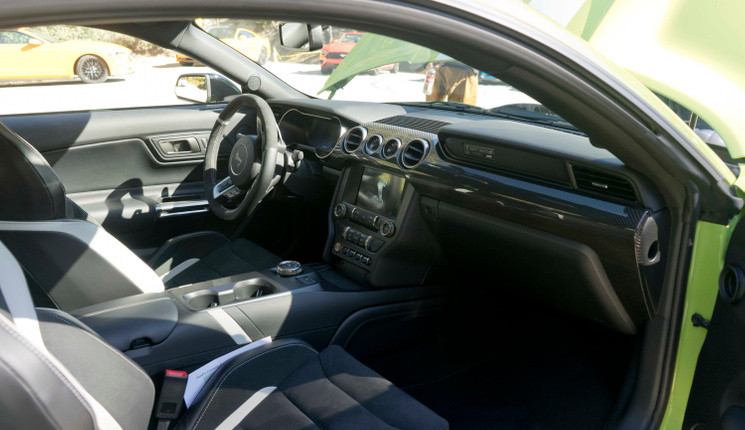 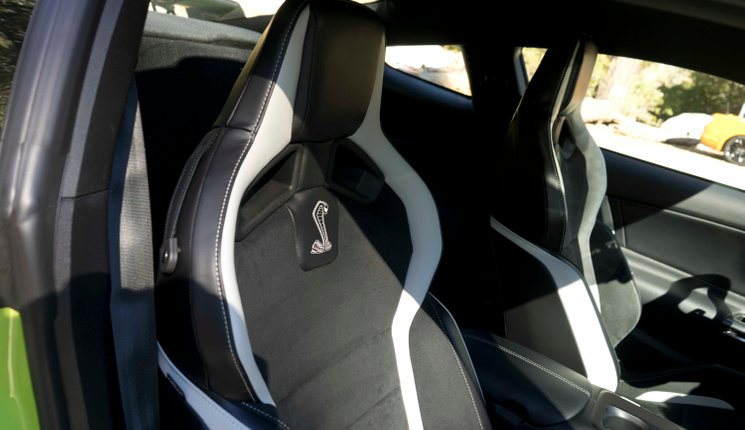 The first order of business after belting in and firing up the GT500 is to flick the dedicated exhaust toggle switch into Track and the driving mode toggle to Sport. Then spin the gear selector to drive, hit the little M button in the middle for manual shifts and go.

It’s loud and blisteringly quick and one look at that intimidating face and you’d expect this Mustang to chew you up and spit you out on the side of the road. But the overall feel here is one of docility and refinement, and that caught me by surprise. In stark contrast, the Camaro ZL1 offers similar performance but feels like a freshly-branded bull writhing in anger ready to impale you at any moment. It's exciting and also scary but nowhere near as approachable as this Shelby.

The GT500 is a car with enough power to flatten a city block but from the driver’s seat it feels about as friendly as a Civic Si. The throttle has a long travel so you can easily meter out all the power; the supercharger is invisible, there is no Hellcat whine, no lag, no on-boost histrionics. It just feels like there's a much bigger motor under the hood than what Ford advertises. 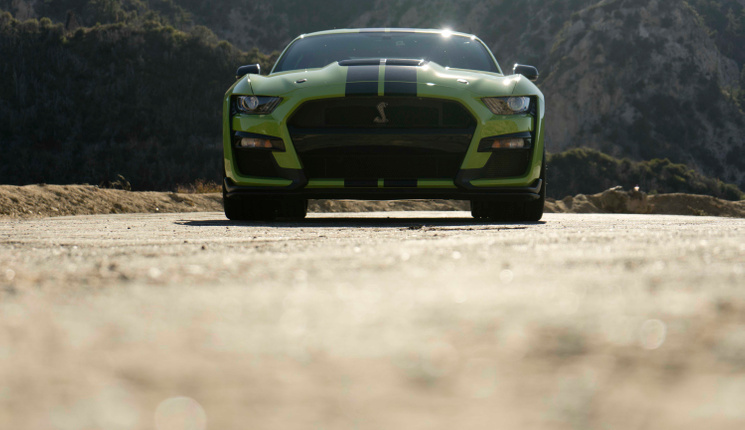 Explore the nether reaches of that pedal travel and this pony will jump out of the gates like Secretariat, riding on an unrelenting wave of torque that never seems to let up. And it remains so well behaved that the drama normally associated with such ludicrous amounts of power just isn’t there. Only when you glance at the speedo do you come to the realization that it takes but a few seconds to break nearly every speed limit on the planet.

But seeing as we were on the sinuous Angeles Crest, straights were few and far between meaning that this was going to be one hell of a fun day at the office. The steering was excellent—precise, talkative, and light. So many high-po cars have a heavy rack in the name of sportiness but lighter effort wheels just feel better in these hands when attacking corners. Something this GT500 does very well indeed. Turn in hard and the 305-section front Michelins claw into the tarmac as the rear end follows without hesitation. Grip is enormous and body roll non-existent.

At nearly 1900 kg the GT500 is, without sugar-coating it, a porker. But you’d never know it weighed that much. Credit the beefed up chassis and quick reacting magnetic dampers that provide a firm but compliant ride while maintaining excellent body control. Those dampers in concert with numerous upgrades over stock make this the most track-focused Mustang yet.

Items like new locating links, a magnesium alloy structural brace, lighter-weight springs, and a new power steering unit are all standard fare while an available carbon fibre track pack for serious users might be the single most expensive option ever available on a Ford production vehicle. At $24,995, or nearly the price of a new Ford Escape, it includes a bunch of add-ons like adjustable front camber plates, a giant adjustable carbon rear wing, carbon trim on the dashboard, and trick exposed weave carbon-fibre wheels. That last item, and the single biggest contributor to the price, will save roughly 60 lbs of unsprung weight. What that means is weight savings where it counts since the wheels aren’t supported by the suspension, and reducing mass there has a big and positive effect on things like handling and braking. Checking off on this package also deletes the rear seat so only one of your lucky friends will be able to ride along as you hot lap your favourite circuit.

And when you want to drive back home, those supportive Recaros are long haul comfortable and the magnetic dampers offer up a ride that’s only slightly firmer than a garden variety Mustang. This is a track car that’s daily driveable. A Shelby that’s so well behaved it feels eerily Teutonic. And if I have one issue with the GT500, that would be it. 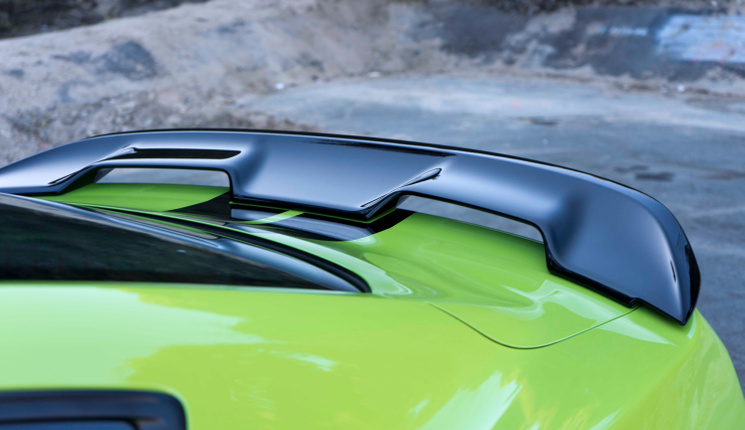 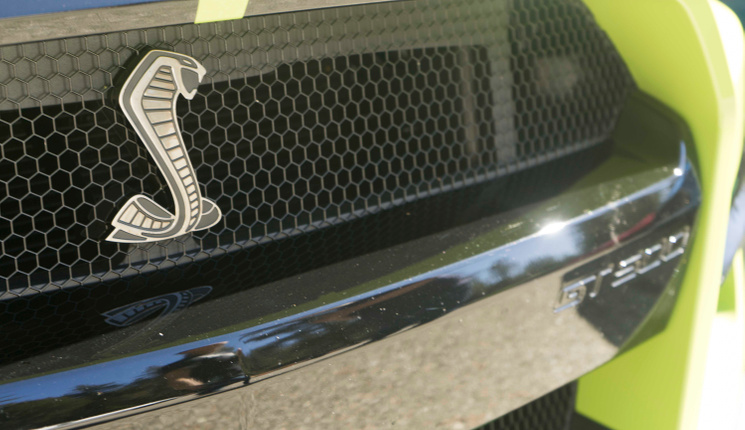 In my head, I was expecting a wild stallion, one that would need to be broken in slowly over time and probably cause me to soil myself in the process. But instead of arriving back at the hotel in a puddle of my own fluids I felt good, like it was too easy. Like the car was willing to work with my shortcomings as a driver and help me get better with practice. Not traits usually associated with powerful Mustangs.

This new GT500 is a car that’s all about numbers. It’s the fastest, the most powerful, and the most capable Shelby to leave the factory. It has an engine from the gods and a chassis that will make you feel like a better driver than you are. It’s a world-beating supercar in blue-collar guise and even though it's lost some of its brutish charm this is the best Mustang the Blue Oval has ever built.