Join the Conversation (0)
PORTLAND, OR – If you can’t really tell what’s new when looking at the refreshed 2020 Chevrolet Bolt, don’t worry, I couldn’t either. As far as refresh jobs go, this is a very mild one.

On the outside, the plastic front grille has gained a bit of texture and there are some new colours. Not much to report, then, but there’s a bigger change hiding deep under the skin: An extra 6 kWh of battery capacity. And while that might not seem like much it’s enough for a 34-km increase in range. Now sitting at 417 km. 2 higher than the Kona EV.

The nice thing is that this extra range comes purely from advancements in the battery chemistry of the 288 individual LG cells that make up the Bolt’s battery pack.

Roughly the size and shape of a large chocolate bar, Chevy had both battery cells—one old, one new—sitting out on a table. To my eye, they were the same, except for some different coloured tape along the edges, or what looked like tape to me. They didn’t add any more cells to get the extra range, but each one now packs more layers of cathodes, anodes, and separators in between. Making them more power-dense.

GM engineers also said that charge times have improved, especially in mild and cold weather. A depleted battery can go from 0 to 160 km of range in about 30 minutes using a Level 3 DC fast charger. These have been popping up with more frequency now. Like this one at a shopping centre in Milton.

The weather in Portland was about perfect for EV motoring. We only needed to use the cabin heater for a short time in the morning and had the windows down later in the day.

We’ve driven the Bolt a few times since it went on sale in 2017 and we’ve always been impressed with Chevy’s little EV. It’s got a small footprint and doesn’t draw much attention to itself with its upright hatchback meets cute-ute styling. Order one in black and you might never notice it whisper by. Or you can be more adventurous and get one of the new colours for 2020—Oasis Blue or Cayenne Orange Metallic—brightening up the Bolt’s already vibrant colour pallet. 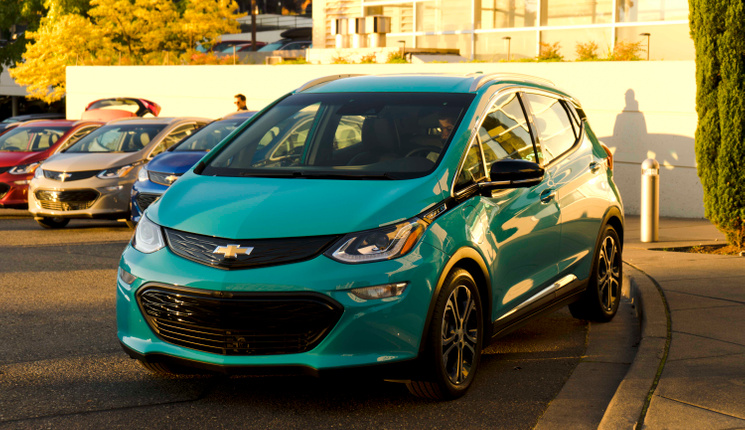 The Bolt drives really well. Always has. It’s relatively nimble, quiet and stable at highway speeds, the electric motor turning the front axle makes plenty of power and torque, and it can hit 100 km/h in about six and a half seconds. More importantly, it will bring a genuine smile to your face.

And Chevy saved their best infotainment system for this car, with bright cheery graphics, quick and intuitive tablet-like operation, Android Auto and Carplay connectivity, and the perfect amount of EV driving facts and figures.

Everything’s tightly screwed together; there’s a lot of plastic but it’s moulded in some cool textures and patterns, the digital instrument cluster is easy to read, and there’s room for four and a couple of suitcases. You could fit 5 but that would be awful cramped, and I wouldn't recommend it. Space-wise, it’s similar to a Honda Fit. 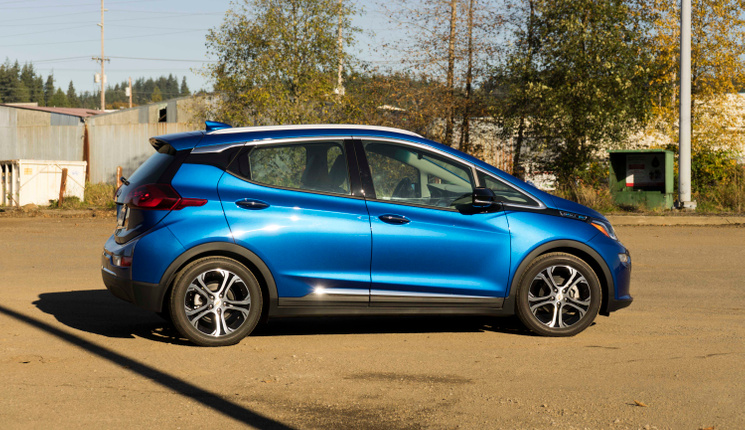 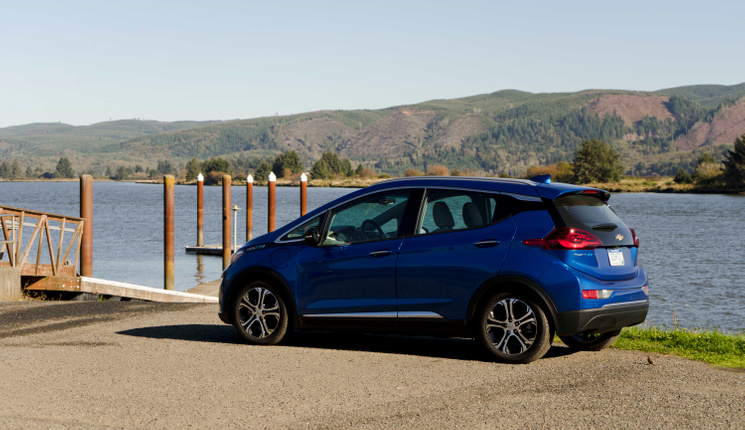 Pop the electronic gear selector into D and set off. There are no gears just smooth electric torque and a distant whine if you really get into the throttle. No surprises here, it drives just like a regular car (without an internal combustion engine).

However, toggle the gear selector to L, or “Low” mode, and the Bolt becomes a one-pedal driver. Move your foot off the throttle in this mode and the Bolt will slow down, like a bumper car, regenerating the battery until it comes to a stop. Hit the accelerator pedal to go again.

You also get a “regen on demand” paddle on the steering wheel. It acts like a hand-operated brake pedal. Pull the paddle and the Bolt will slow down with more force than you initially expect. Keep it pressed down and it will also bring the Bolt to a complete stop, putting precious electrons right back into the battery. Using one of these driving modes, or styles you can actually be very efficient with the Bolt. Many owners have easily beat Chevy’s mileage estimates. But that takes a bit of effort from the driver and it can get tiring always driving like that, though you do get used to it. 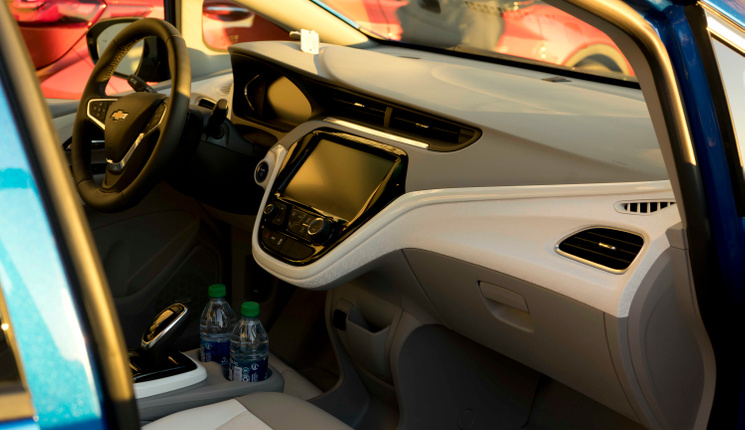 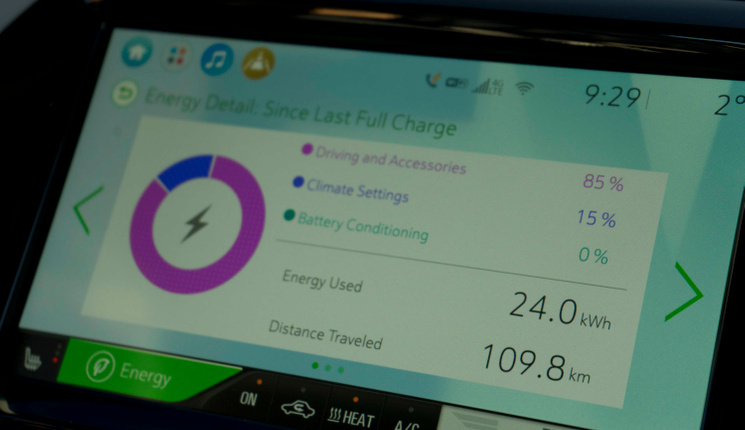 My driving partner and I had a different plan in mind; we weren’t just going to drive like a good responsible Bolt owner might. Stretching each and every watt to its fullest. No. We were going to drive the Bolt. And drive we did!

I used the regen paddle as much as possible to slow down the Bolt but that was really about the only green driving technique utilized. And thanks to the Chevrolet support crew we knew we had, there was no range anxiety here. If the car limped to a stop we probably weren’t going to be caught on the side of the road for too long.

We turned what should have been a pleasant drive into an electrified cannonball run. But was it ever fun. Our destination happened to be a charging station and our goal was to see how badly we could do. Could we kill the Bolt before getting to the station? We certainly tried, but the little blue Bolt still made it despite all our efforts. Although, it was running on proverbial fumes when we finally rolled up to the Electrify America fast charger located at a strip mall. After the range display dipped below 20 km, it stopped displaying range entirely. Replaced instead with some warning messages: propulsion power reduced; low battery; charge vehicle soon. We figured we had roughly 10-15 km left in the e-tank. 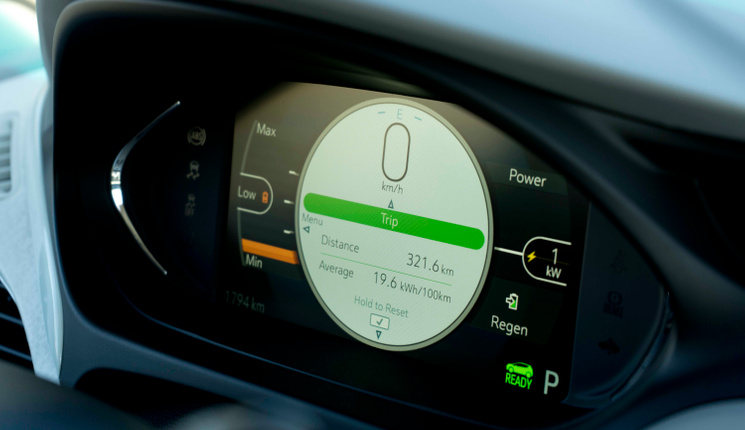 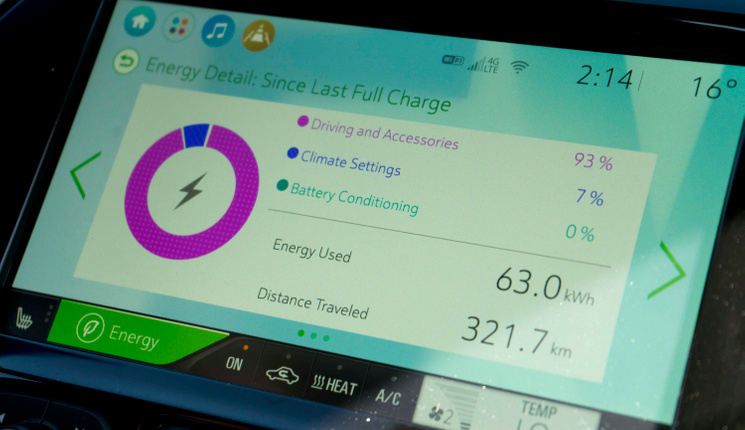 They were some seriously powerful chargers, capable of juicing up an EV at a rate of up to 350 kW. But at this point in time, even the fastest charging electric car—the new Porsche Taycan—will charge at a max rate of about 270 kW, and only for a short time.

The maximum charge rate we saw on the Bolt was about 53 kW. GM says that up to 55 is possible but this is dependent on outside temperature, battery charge state, and even how you were driving. The car and charger communicate with each other wirelessly to determine the optimal charging rate at any given time.

As the battery gets topped up, the charge rate slows. This happens with every EV today and is inherent to charging Li-Ion batteries. Just like your phone. And that’s why manufacturers rarely tell you how fast you can get to a 100 per cent charge. It’s always how fast you can get to 80. Think of charging a battery like pouring a full glass of water. You can pour the water in quickly at first, but as the glass fills up you have to slow the pour in order to avoid over-filling and spilling water everywhere. Batteries work in a similar way. 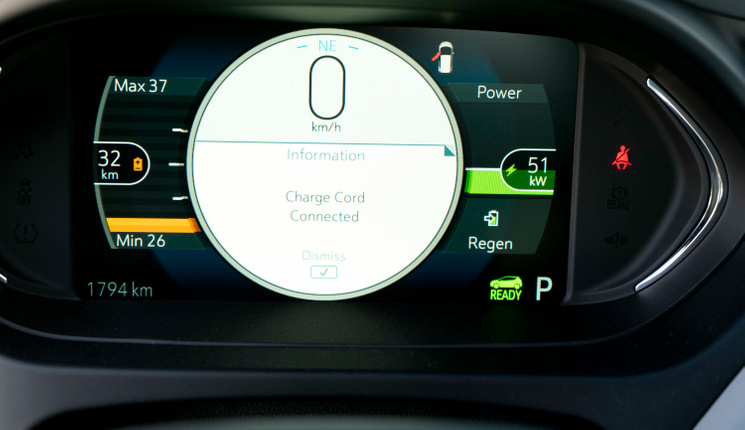 Even driving like we stole it, we covered just over 321 km using 63 of the 66 kWh of the Bolt’s battery capacity. That’s an average efficiency rating of 19.6 kWh per 100 km. Driving in a more efficient manner, at least according to the onboard computers, would have netted us about an extra 100 km of range. So we could have theoretically beaten the Bolt’s new ultimate range estimate of 417 km. But I already knew we could have done that. What I didn’t expect was to be able to drive in such a spirited fashion and still eke over 300 km from the battery. That’s pretty impressive performance.

But I was already a fan of the Bolt before and the point of this drive was to showcase that extra 6 kWh of battery capacity. How much difference did it actually make? Hard to tell, really, but every little bit counts I suppose. Should you be running to the nearest Chevy dealer to trade in your old Bolt for this new one? Probably not. At least not yet because this refreshed Bolt seems like a bit of a placeholder for the next generation of EVs that GM is soon to introduce. Well, that’s their plan anyway but so far they’ve been very tight-lipped on future product.

However, if you are considering an EV for the first time, the 2020 Chevrolet Bolt now offers more range than its competitors like the Nissan Leaf Plus (363 km) and the Hyundai Kona EV (415 km) and for new EV adopters that might be just enough to tip the scales in the Bolt’s favour.

Look for the 2020 Bolt at dealers later this year at a starting price of $44,998. $198 more than last year but still a qualifier for the full federal EV rebate.