Join the Conversation (0)
MALLORCA, Spain: Revealed at the Paris Motor Show this fall, the 2019 Porsche Macan marks the first real update since it bowed in 2014.

Like the mid-size Cayenne SUV, the compact Macan SUV has vaulted Porsche into a high volume automaker – a far cry from the days before the sport trucks arrived on the scene.

When the new Macan arrives next year, we will have two initial engine choices, starting with an Audi-sourced 2.0-litre twin-cam, twin scroll turbo inline four-cylinder producing 248 hp and 273 lb/ft of torque.

The Macan S will feature a three-litre twin-cam, twin-scroll V6 making 348 hp and 354 lb/ft of torque.

Limited to 225 km/h, the base Macan does the 0-100 km/h sprint in 6.7 seconds or 6.5 seconds with the optional Sport Chrono Package, while the Macan S with Sport Chrono gets it down to 5.1 seconds

At the recent world launch of the new Macan, only the starting price for the base Macan was announced at $55,500. The Macan S, due later next year, was still being cost factored for Canada at this writing.

The massaging of the PTM allows more flexibility, aided by a choice of bigger tires ranging from 18- to 21-inches.

The nose has been re-styled, with new LED headlights including the optional Porsche Dynamic Light System Plus (PDLS Plus) that adaptively controls illumination of the road.

I drove both the four-cylinder with steel suspension and the V6 with air suspension over a variety of roads, which including some ancient ones not much different in surface and width from the time when a goat cart was king of the road.

Both steel and air suspension were quite supple in soaking up the ruts, and in some places, bare rock. 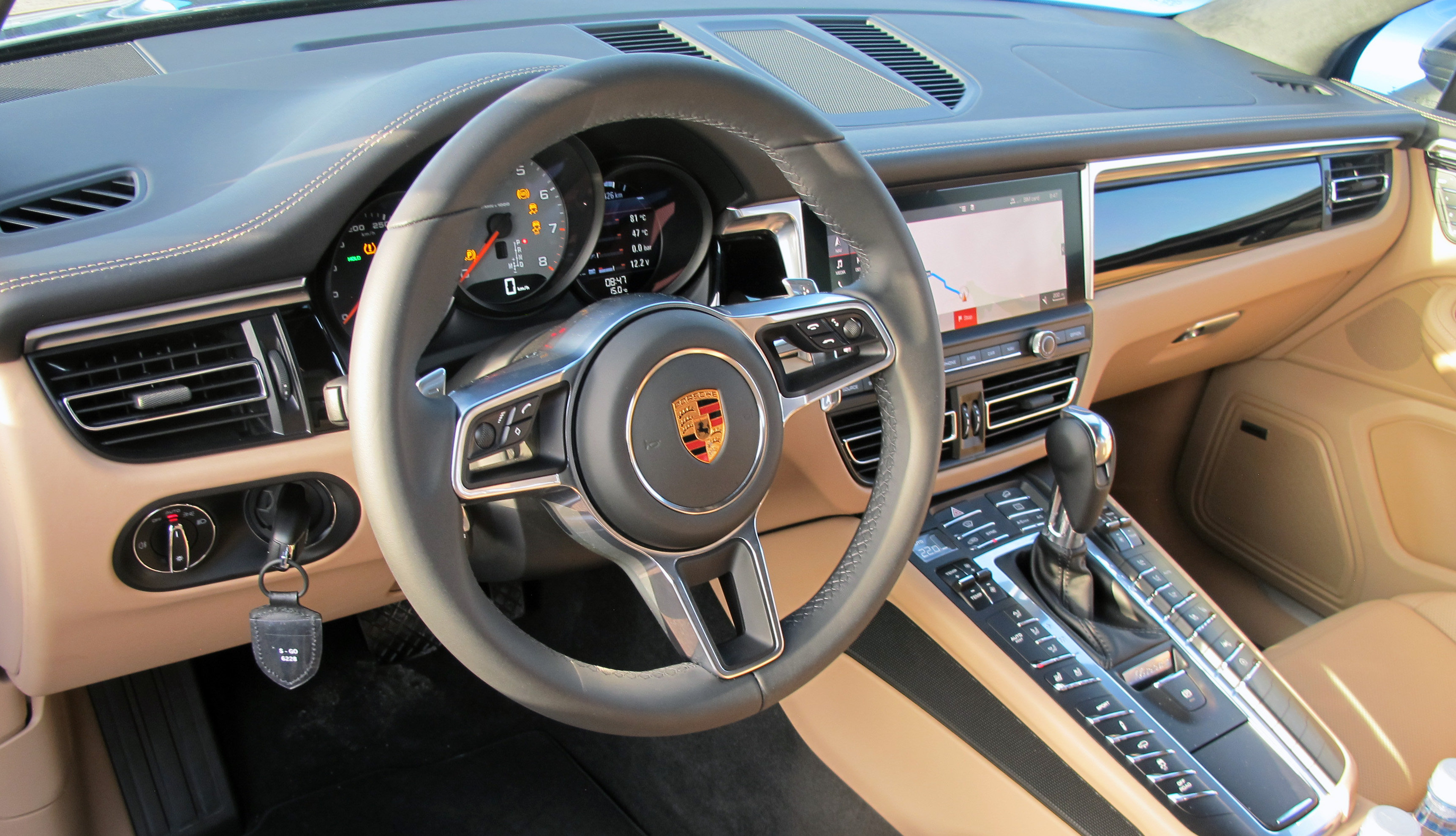 Acceleration from the four-cylinder was sharp, even though it has s gross vehicle weight rating of 2,510 kg.

As my co-driver and I rolled through the seaside towns that were almost deserted because it was the tourist off-season, we both remarked that were was virtually no outside noise seeping into the cabin.

The V6 with its air suspension was more of the same, although I know from previous Macan experience the air suspenders provide adjustable ride height and damper stiffness and optimally tunes the car for virtually any driving condition.

In this day of electronic start buttons, Porsche does have an electronic multi-function fob, but over on the left, there is a tab instead of a key you twist to bring the Macan to life.

Thankfully, Porsche has not done away with the long row of control/mode buttons on the centre stack, such as Sport mode and damper settings, ride height, opening up the exhaust for a richer tone and one marked “Off Road” – which the Macan does surprisingly well.

Like the 911, the Macan tires are wider at the rear than the fronts and with the constantly compensating Porsche-style AWD, you can drive this like a sportscar — improbable as that may sound – but it’s true.

And for 2019, Porsche has stepped up the connectivity starting with a larger, 10.9-inch HD touchscreen with on-line navigation, mobile phone preparation, two audio interfaces and intelligent voice control.

Standard is Porsche Connect Plus that includes a SIM card reader and LTE phone hookup that acts as a WLAN hotspot.

Porsche stresses the system can be connected to Here Cloud for navigation needs, such as up-to-the-minute traffic/congestion data.

Not fitted to the Macans I drove in Mallorca, but offered in Canada as an option, is the optional GT sports steering wheel similar to the one in the 911 with a “sport response” button that is part of the Sport Chrono Package.

A little rotary wheel on the button allows the driver to select from several engine/suspension/steering settings for whatever conditions or needs are encountered.

And Porsche isn’t done yet with the Macan, as you can expect a GTS and top trim Turbo in the near future.

When you combine the prowess and presence of a Porsche with a compact crossover that buyers are falling over themselves to obtain, you create a winner – something the brand has surely done.