Everything You Want To Know About The Dodge Challenger Hellcat Jailbreak

Join the Conversation (1)
There’s no point in reviewing the Dodge Challenger Hellcat Jailbreak.

Even though there are perfectly sensible alternatives and of course, natural competitors for the (presumably) swan song Hellcat, an 800+ horsepower, $110,000 + Dodge is either something you want and are willing to pay for… or it isn’t.

This is a subjective vehicle, to say the least. Depending on your personality, a Challenger (in any trim, really) is either a cog piece for tasteless simps or a working class hero, spitting in the face of the automotive aristocracy.

So instead of trying to boil down the Hellcat Jailbreak to a simple thumbs or thumbs down, I’m going to try and and answer any relevant questions you might have about it — and along the way attempt to convey the unforgiving, borderline terrifying, brutal savagery this car presents you with.

How much horsepower does it have?

That’s the same number as the SRT Super Stock and Demon (in its street setting) limited editions. Dodge starts with the “Redeye” variant of the 6.2-litre supercharged HEMI engine and through “revised powertrain calibration” adds an additional 10 horsepower over the standard Hellcat Redeye’s pedestrian 797 horsepower. 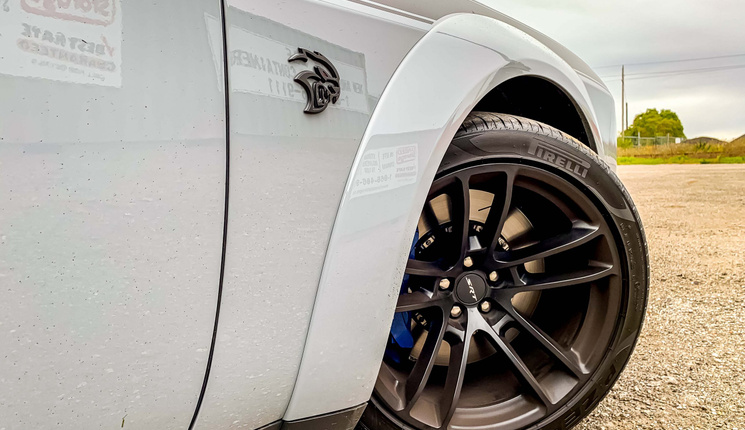 
Hold down the “launch” button just ahead of the shifter. Pin the brake to the floor with one foot and the accelerator with the other. The entire car begins to shake and rock as the tires spin into smoke.

Let off the brake and the tires continue to fight for traction. Wrestle the back-end into line and hold tight as supercharger whine fills your ears and your chest begins to feel like someone is pushing you into your seat with both hands.

The experience is violent, loud, inefficient, scary, thrilling, intoxicating and a little exhausting all at the same time. It’s like being in the middle of a mosh pit.

What exactly is a ‘Jailbreak’?


The Jailbreak is one trim level above the Hellcat Redeye Widebody.

The basic premise of the Jailbreak package is to unlock everything that was previously exclusive to different trim levels, production years or special editions.

So off the hop, the Jailbreak receives a more powerful engine variant than the run-of-the-mill Hellcat Redeye (see above). 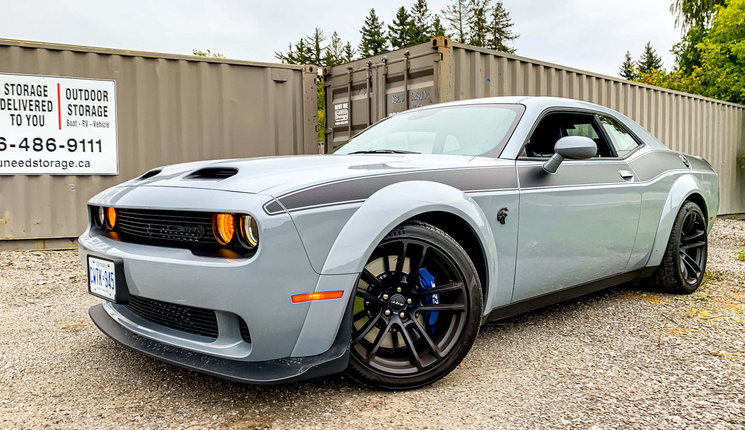 Admittedly, it is kind of neat to think there may be some “one of one” combos out there. Who knows, maybe you’ll end up with the only Jailbreak of its kind?

How fast is it?


On the street? From a dig? It’s not as quick as you might think.

The absolute best time to 100km/h that I — or apparently any test driver who had the same presser from Dodge, as times were all stored in the car’s SRT Performance Pages — could manage was 4.1 seconds.

That’s not slow. But it’s literally the exact same time I clocked in the Durango Hellcat last year — an SUV with about 100 less horsepower.

And in fact, it’s about as quick, on paper, as a modern Mustang GT or Camaro SS with a 10-speed automatic. A new GR Supra or C8 Corvette between the lights? Forget it. You’re losing. 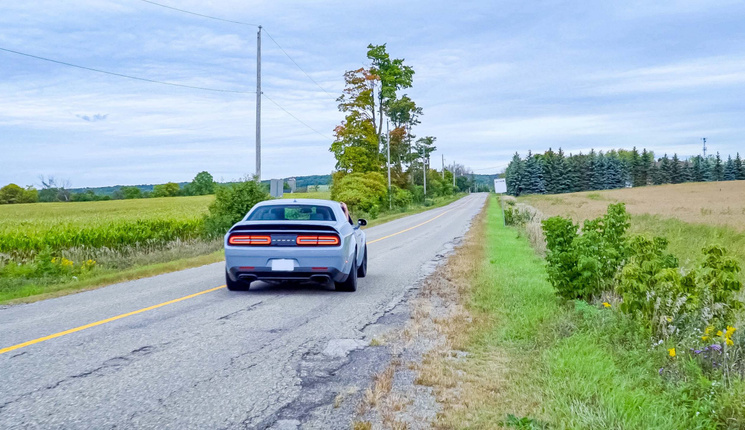 Don’t even get me started on EVs. A Porsche Taycan Turbo or Tesla Plaid would simply humiliate this thing from tree to tree.

Things weren’t much better from a roll, either. Hammer the throttle at any speed and the Challenger’s 305-inch tires scream and fight for traction. The ass-end flies out on you, and you have to wrestle the 4,500-lb car back into a straight line. Anything more than a half-throttle pull feels like getting into a fist-fight with an actual grizzly bear. If you’re picturing THAT scene in The Revenant right now, then you’ve got the right idea.

Sure, things are probably very, very different on a prepped drag strip and over say, a half mile, the Jailbreak should be able to outmuscle… anything.

But in the real world? On the street? Well, as they say, “spinin’ ain’t winnin’”.

So is the Jailbreak worth it?


On paper? Not really.

You know how boring people who aren’t into cars project their fear and insecurity onto you by saying things like, “What’s the point of all that power? It’s not like you can use it.”

Yeah, those people are the worst. But I have to admit that in this case, they’re kind of right.

You can’t just light up 807 horsepower whenever you feel like it. Even while on the highway. My first day with the Jailbreak, I tried to gingerly overtake with a half-throttle pull, only to find myself having to catch a wave of snap-oversteer. That’s no joke at 100 km/h. 800 horsepower isn’t just unusable, it’s fully dangerous.

For this reason, the best buy in the Dodge lineup remains the 392 Scat Pack. 480-ish horsepower is very usable on the street. And in fact, the Scat Pack cars are only a few short fractions of a second slower to 100 km/h than this car, despite having just over half the power.

You’re saying you wouldn’t buy one, then?

The Jailbreak did flat out scare me… for about 12 hours. Then it started to hypnotize me. As soon as I felt like I could predict when and where the tires would break loose, I knew how to correct and even manipulate the snap oversteer. That’s when the car stopped being a haunted house and became a Halloween party. Complete with all the smoke.

Burnouts and drifts became on demand. I stopped caring about the numbers or the zero - 100 times, and instead became obsessed with the sounds, the sensations and the experience.

The sound of the supercharger whine. The smell of roasting tires. The rollercoaster-like thrillride of the acceleration. It is one of the most intoxicating driving experiences I’ve ever had, and that’s a really hard thing to put a price on.

305/35ZR20 Pirelli P-Zero tires on all four corners work like magic to reduce body roll and glide the lumbersome Challenger through twisties. Sure, they won’t help you under a full throttle launch, especially when not properly warmed up. There are hundreds of YouTube videos of Hellcat owners learning that fact the hard way. But with so much grip and weight to drive the tires into the ground, this Challenger is actually quite a bit of fun through back roads. 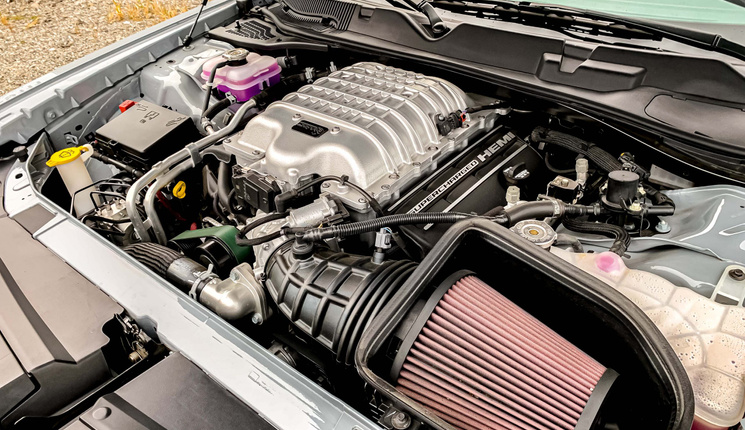 Could you use one every day?


I wouldn’t drive this one in the winter. Or even just in the wet. It was completely unruly in even a light drizzle.

Also the gas mileage in traffic is hilarious. About 18L/100km. And you have to feed it 94 octane.

Speaking of traffic, the engine gets very, very hot at idle. Sit at a set of lights for too long and you can watch the temperature gauge slowly creep up and up until a cacophony of fans kick in to help cool down the enormous, supercharged V8.  You’re quickly reminded how incredible it is that Dodge will sell you one of these with a warranty.

Outside of that, the Challenger is incredibly dailable. It’s very comfortable. It’s easy to see out of. It’s easy to park. It has an enormous trunk and a usable backseat.

But should I just wait to see if Dodge announces an even more powerful version?


Despite the rumors of a final, 900-horsepower version, I’m dubious that it will actually come to market.

Besides the reliability factor, and the fact you would have to fill it with E85 to see the benefits, and the fact it would irritate every customer who went out and bought a Super Stock or a Demon, it just wouldn't be any faster on the street.

I think if you’ve been waiting for the “ultimate” Challenger, this is probably the one to get — the level of customization and power simply won’t disappoint.