Civic brings back the hatch

The 2017 Honda Civic Hatchback brings back the model that set the stage for the brand’s 18 years as the best selling car in Canada.

Join the Conversation (0)
With its 2017 Hatchback, Civic continues a product offensive that will eventually see five different models to choose from on Canadian Honda dealership floors.

The Hatchback joins the Sedan and Coupe and will be followed soon by a higher performance Si and the first-ever Civic Type-R model offered in Canada.

Now in its 10th generation, Civic and the VW Golf really kicked off the hatchback in this country and it has never looked back, being the best selling car heading into its 18th straight year. 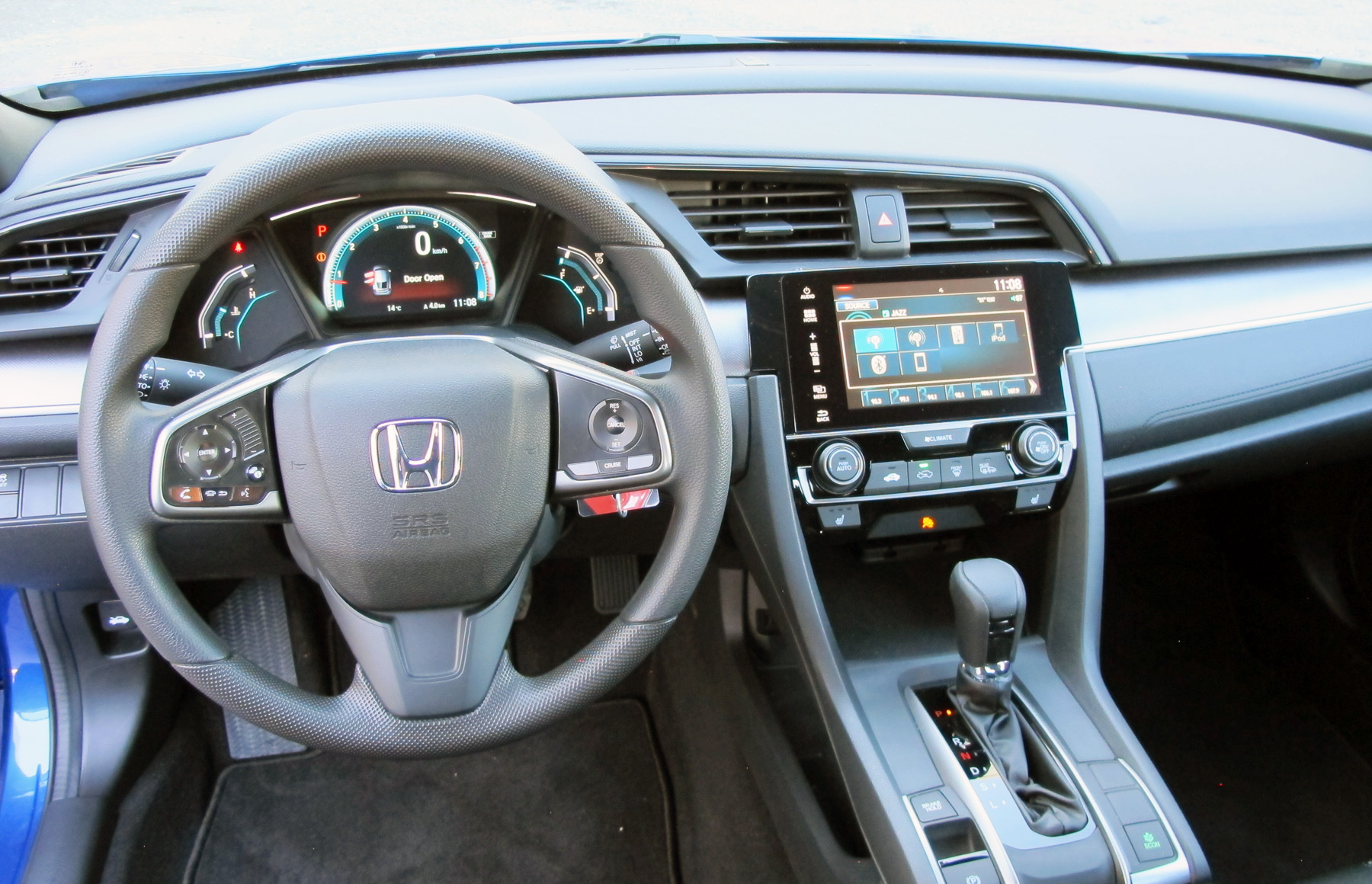 The interior of the 2017 Civic Hatchback features a large main instrument binnacle, as well as a seven-inch touchscreen at the top of the centre stack.[/caption]

The difference with the Hatchback is it’s seen by Honda as approaching the near-luxury segment, an arena that Canadians are increasingly being drawn to particularly when it comes to compact CUVs.


As I noted when I drove the Coupe recently on these pages, Civic got to where it is by being tough, frugal and dependable but also a bit on the drab side when it came to styling and finish. 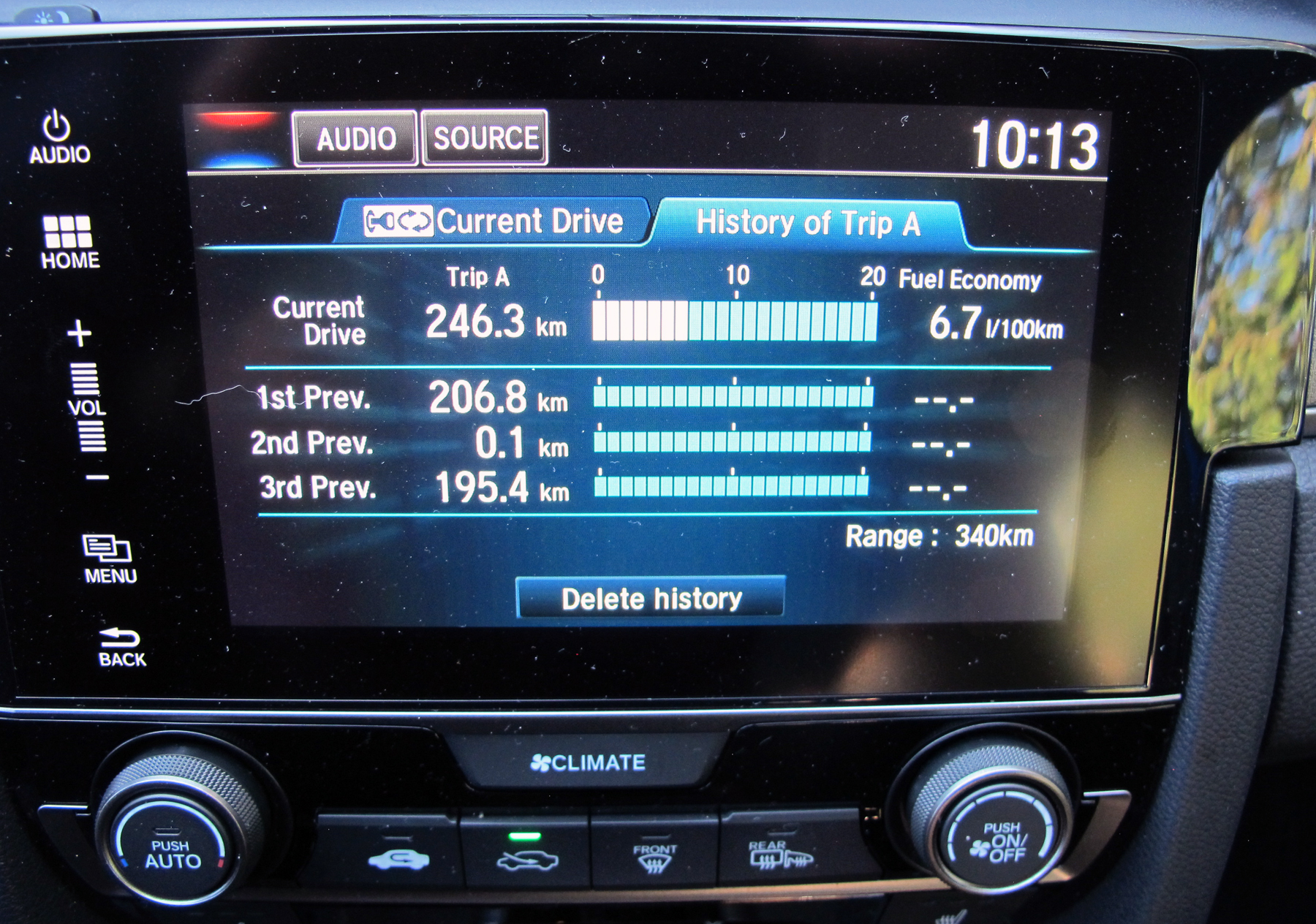 One of the features of the Civic Hatchback is a readout of how the driver has done in terms of fuel economy.[/caption]

Basic used to be good, but not anymore — when you look at how Hyundai and Kia in particular (just named best overall in the U.S. J.D. Power satisfaction survey) have upped the content and looks game. Honda has taken notice.

Of course, the hatchback name of the game is cargo volume. When it comes to looks, the Hatchback gives an extra injection of the new styling language with bold character lines with over-the-top faux air ducts up front and air extractor inserts at the rear.

There is a double spoiler at the rear, one at the top of the liftgate and another at the rear beltline. The rear window extends below the mid-spoiler for a better review and a rear-view camera is standard with a moving grid. 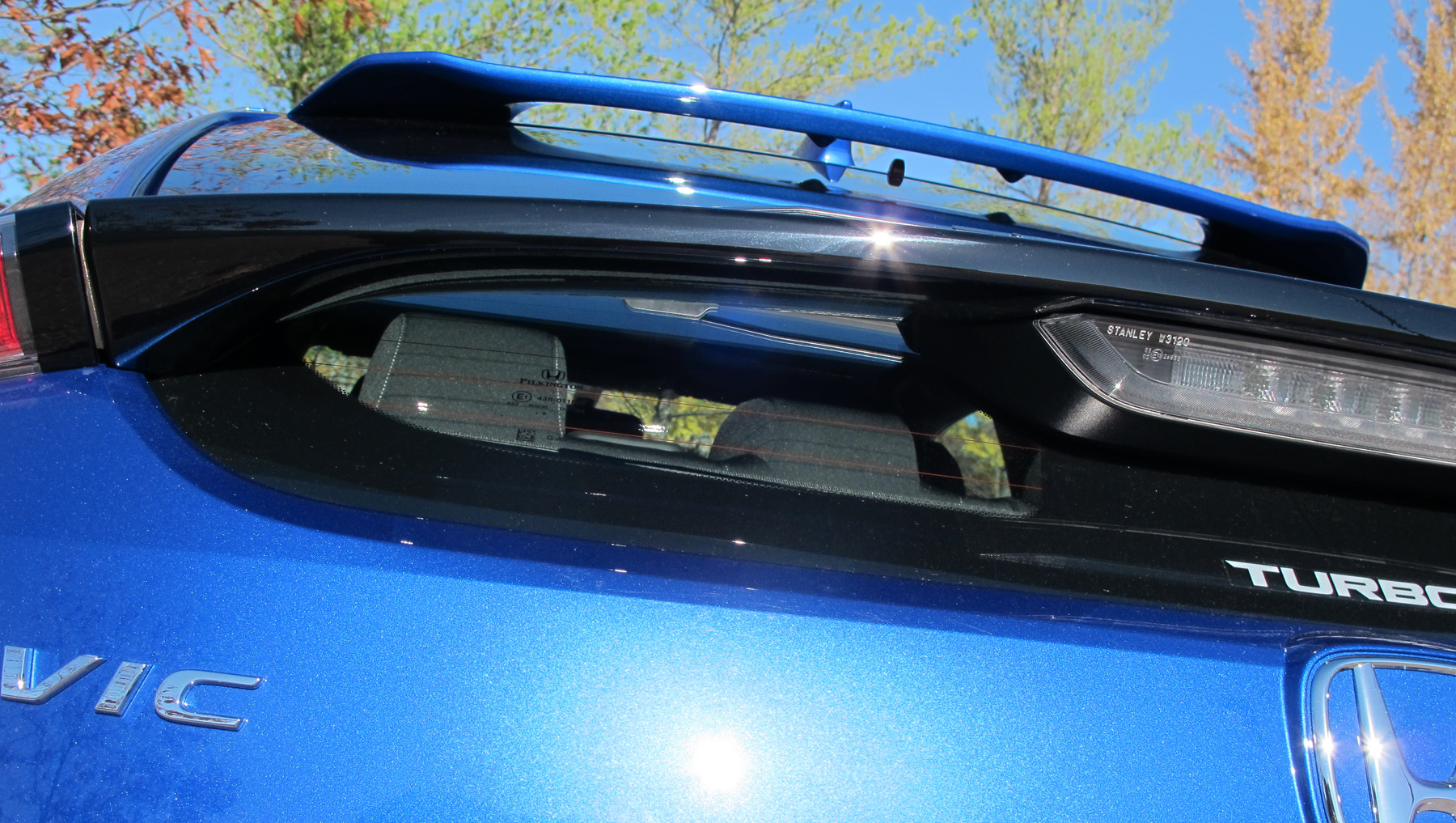 The new Civic Hatchback uses two spoilers that reduce drag by channeling air down and back.[/caption]

Open the liftgate and it is huge back there with 727.7 litres behind the 60/40 split/fold seat and 1,308.2 litres folded. Bonus is a full spare below the cargo door, which is a major buying decision for me.

And thank you Honda for installing a full spare, not a dinky or ludicrous inflator kit. 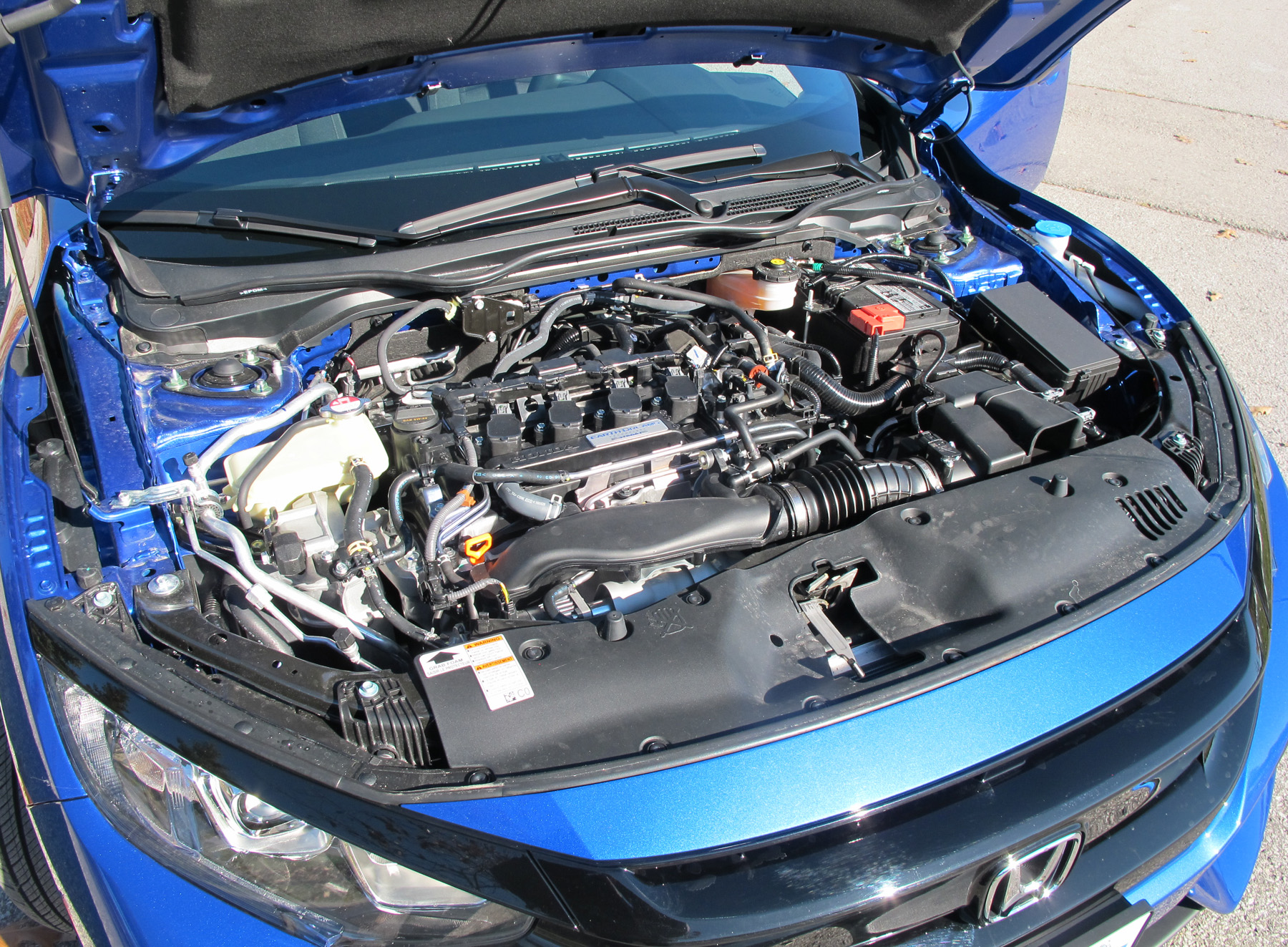 The 2017 Civic Hatchback is only available with one engine, a 1.5-litre turbo direct injection inline four-cylinder with 174 hp and 162 lf/ft of torque driving the front wheels through a standard six-speed manual and optional CVT transmission.[/caption]

The Hatchback is available with its new top engine, a 1.5-litre twin turbo direct injection inline four-cylinder driving the front wheels through a standard six-speed manual or optional CVT transmission. 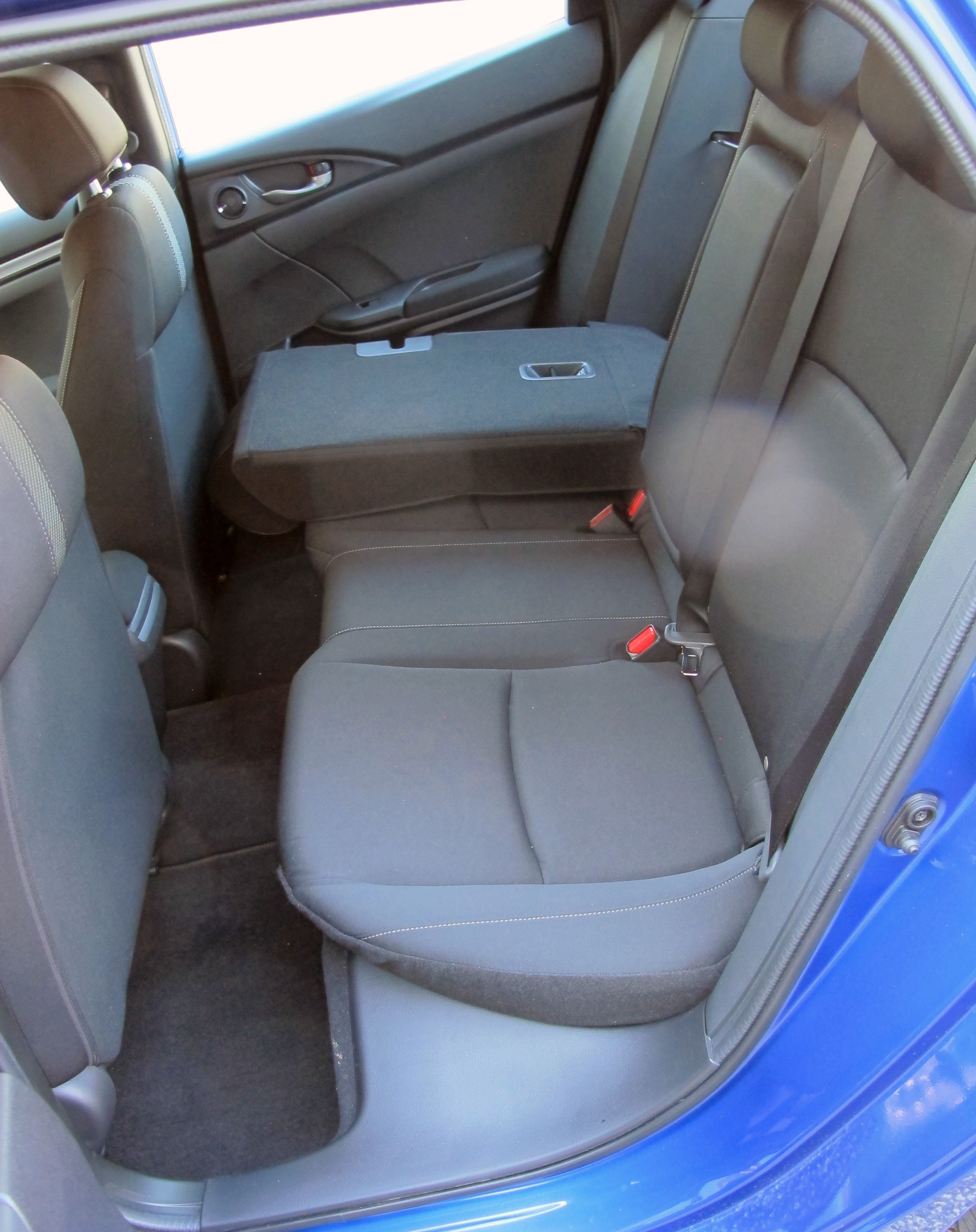 The 60/40 back seat has adequate legroom for 5 adults.[/caption]

Not available on the LX but fitted to the Sport/Sport Touring is Honda’s innovative LaneWatch. It has a camera on the underside of the passenger outdoor window that turns on the centre stack monitor when the right turn signal is turned on, giving a tremendous view of what is on the right — great for passing.

All hatchbacks have an Econ Mode activated by a button on the centre console that changes things such as the shift points to improve on the already good fuel economy. 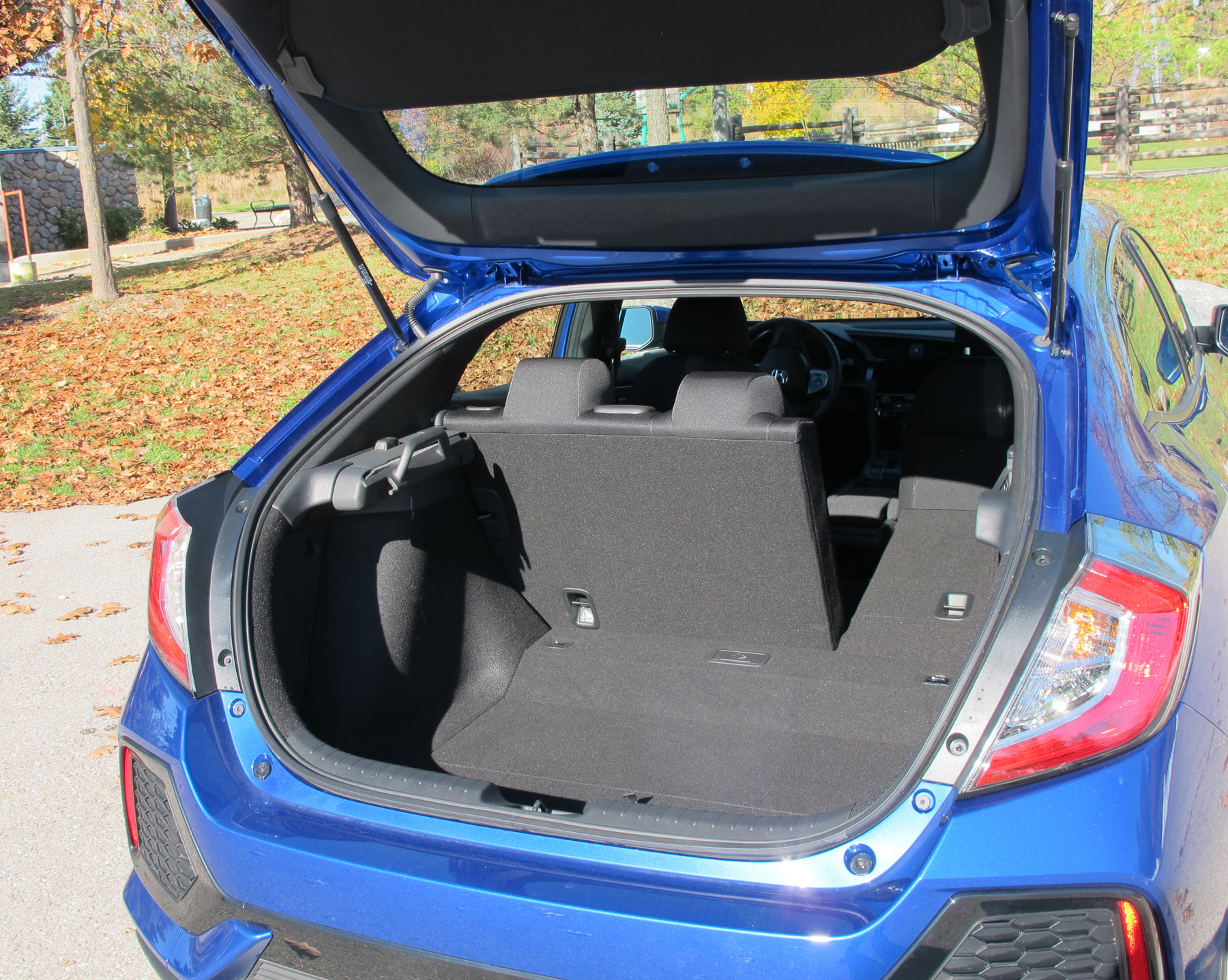 
You notice it most when, on the highway at speed, you hit the button and you’ll feel the hatch noticeably slow. The reverse is true if you switch out of Econ.

Compared to the new Coupe I drove few weeks ago, the Hatchback seemed somehow bigger on the inside, maybe because of the higher roofline.

Taking a friend out for an afternoon ride in the last balmy days of fall was super enjoyable with leaves swirling across the roadway.

The feel through the steering wheel is very “Euro” being taut and responsive. 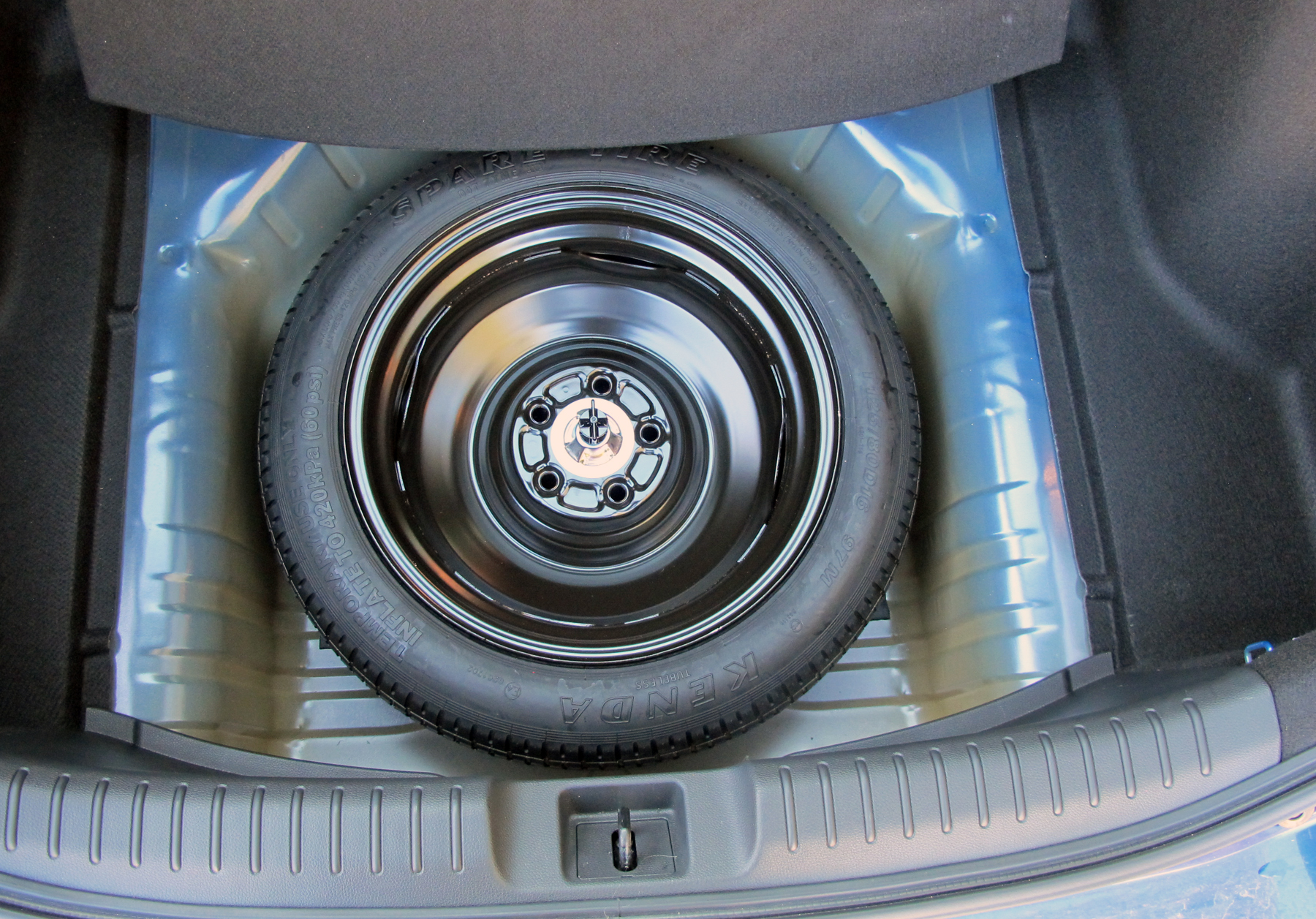 Thank you Honda for including a full spare tire with the Civic Hatchback.[/caption]

I was in Econ all the way, so passing made the 1.5-litre engine work for it. I should have switched into normal mode but I just forgot.

The only other thing out of the ordinary was a rushing wind sound from behind my head at highway speed. My friend, a former auto writer, surmised it was probably the double spoilers doing their thing, which makes sense.

When you get down to it, with 1,308 litres of cargo room and seating for five, the new Hatchback offers everything a compact CUV has, but without the higher price. 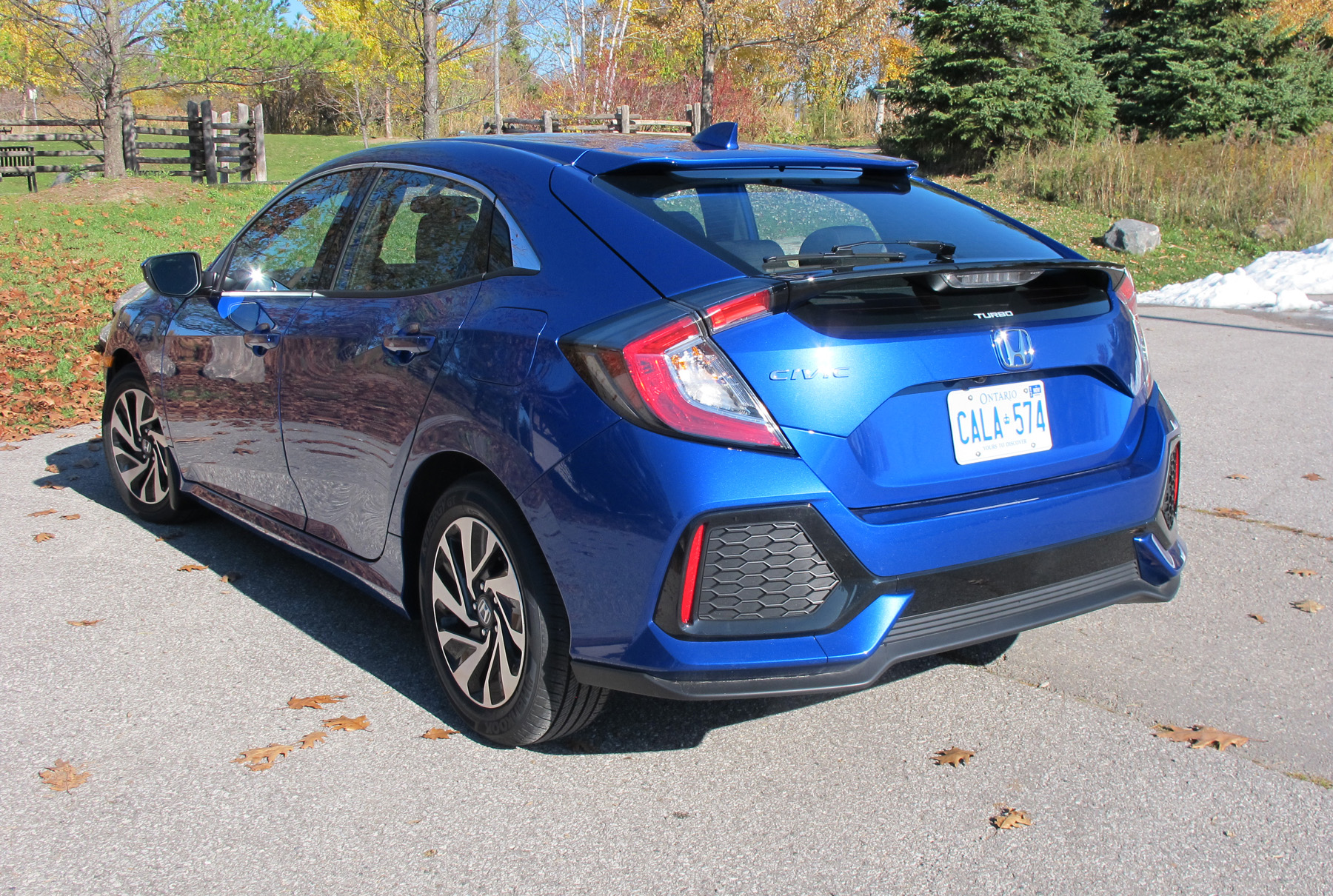 The highly styled rear of the 2017 Civic Hatchback has two spoilers to decrease airflow drag.[/caption]