The 2015-2019 Sonata is roomy, comfortable and refined but when it comes to mechanical reliability, the Sonata raises some red flags.

Join the Conversation (0)
Maybe the most interesting bit of trivia about the Hyundai Sonata is that it was once built in the land of poutine and maple syrup.

The all-new midsize Hyundai replaced the rear-drive Stellar in 1989, and was produced at a brand-new assembly plant in Bromont, Quebec, 90 kilometres east of Montreal.

The front-wheel-drive sedan was shaped by Giorgetto Giugiaro – the Italian who styled the original Volkswagen Golf (Rabbit) and, uh, the Hyundai Pony – while Mitsubishi supplied the drivetrains. Hyundai and Chrysler planned to sell 30,000 Sonatas in the U.S. annually under the short-lived Eagle banner, but the scheme was dropped. Poor sales closed the Canadian plant just four years after opening.

It took several model generations before Hyundai struck the right combination of styling, content and performance to make the Sonata a success in 2011. While it won conquest sales from the bestselling Toyota Camry and Honda Accord, owners soon noticed the engines weren’t holding up well.

Improperly machined crankshafts and crankpins could shed metal shavings inside oil passages, starving the engine of lubrication. According to Consumer Reports, Hyundai and corporate cousin Kia have issued 33 recalls for potential vehicle fires involving 20 models and more than five million vehicles from model years 2006 to 2021.

The 2011 to 2014 Sonata was notorious for its engines that consumed oil and seized – a not-so-trivial aspect of owning one. But did the next generation, built from 2015 to 2019, fare better?

The seventh-gen Sonata dialed back some of the previous sedan’s swoopy styling – reportedly not a crowd pleaser in South Korea – for a more tailored, conservative look that fell in line with the Camry and Accord. Its front-drive platform benefited from some tuning to yield better handling and ride characteristics, the result of many coffees with the engineers at Lotus Cars. 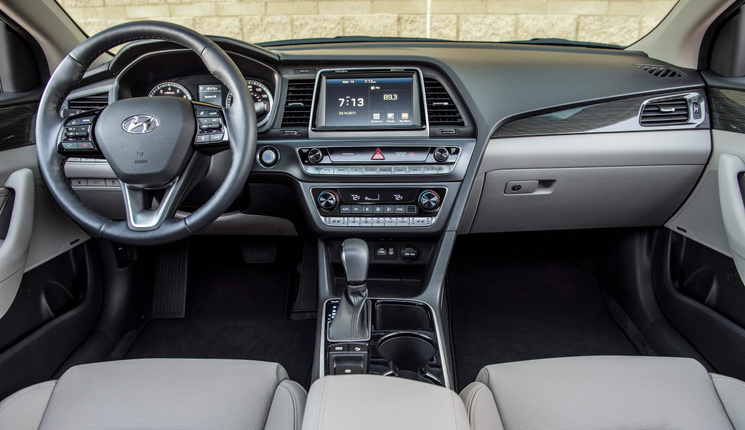 The cabin has an upscale, cutting-edge feel that shows Hyundai’s fascination with the trapezoid. The dashboard layout is straightforward and easy to use, with dedicated buttons for primary functions like audio, phone and navigation. The touchscreen interface is fairly intuitive, although the 5-inch touchscreen isn’t very big (the optional nav system gets an 8-inch screen). The Sonata has ample room for four or five adults – or even three booster seats in a row.

“I often have three kids with me, my growing nieces and nephew. They are all currently still in booster seats, but fit easily in the back seat,” posted one owner online. In fact, the U.S. Environmental Protection Agency categorizes the Sonata as a “large” car for its interior volume.

Those in back get a bit more hip- and legroom than before, although taller passengers might end up slouching a little due to the sloped roof line. Visibility is good all around. Trunk space is generous at 16.3 cubic feet and the standard 60/40-split-folding rear seat instantly adds more cargo room when needed.

Powering most Sonatas is a 2.4-L four-cylinder engine making 185 hp and 178 pound-feet of torque. The optional 2.0-L turbocharged four-cylinder, which made 274 hp previously, was refitted with a smaller turbocharger, dropping output to 245 hp (and 260 lb-ft of torque) in the interest of better fuel efficiency. Both come attached to a conventional six-speed automatic transmission. The redesigned Sonata Hybrid returned for 2016; we’ll cover that model separately in an upcoming feature looking at gas-saving hybrids in the used-car market.

In crash testing by the U.S.-based Insurance Institute for Highway Safety, the 2015 Sonata earned the top “good” rating in the moderate-overlap frontal-offset impact test, and a second-best “acceptable” in the small-overlap front impact test. In U.S. government testing, it received a perfect five-star rating in frontal- and side-impact crash tests.

All 2016 Sonatas came with a minimum 7-inch touchscreen standard, while the suspension was massaged to enhance handling. The sedan got some mid-cycle styling tweaks for 2018, with a revised front grille, taillamps and some interior updates. A new eight-speed automatic transmission mated to the 2.0-L turbo four. Apple CarPlay and Android Auto apps became standard, as did blind-spot monitoring and rear cross-traffic alert. 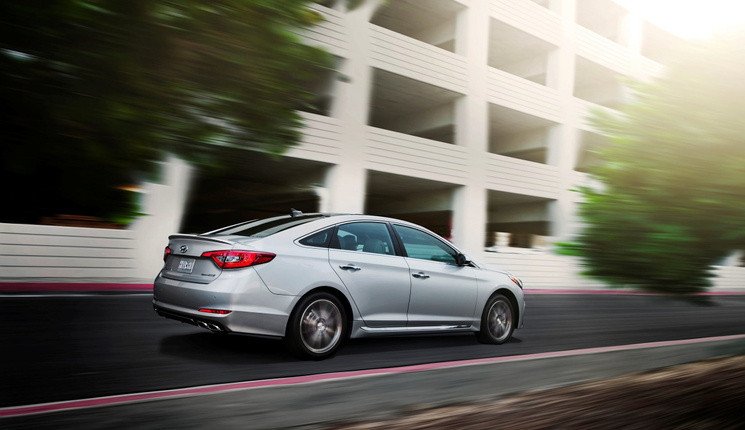 Driving the Sonata provides some welcome surprises in terms of refinement, but what it doesn’t do is engage the driver very well. Acceleration with either of the powertrains is leisurely. The popular 2.4-L base engine whisks the sedan to highway velocity in 8.1 seconds – well off the pace set by cars like the Accord. Even the Sport model with its 2.0-L turbo four can’t muster much better than 7.2 seconds.

Feedback through the steering wheel is present and alert. Though not nearly as fun to drive as an Accord or Mazda6, the Sonata acquits itself reasonably well, while the braking is slightly below par. If the car doesn’t live up to its “sport” moniker, it makes up for it with calming serenity that wouldn’t be out of place inside a Mercedes-Benz. For many motorists silence is equated with quality and that counts for a lot.

Reminiscent of the much pricier Genesis luxury models, Sonata drivers love their cars for the roomy and quiet interior, refined ride, high feature content for the money and the five-year factory warranty. Deficits include the sleepy acceleration, forgettable styling, slightly constricted headroom in the back seat, and some hard plastics around the cabin.

When it comes to mechanical reliability, the Sonata does raise some red flags – or more accurately, trigger some warning lights on the dash. As noted earlier, its four-cylinder engines are reputed to grind themselves to smithereens, and owners of 2015 to 2019 models should keep a vigilant eye on their engine’s dipstick.

“Serviceperson said car was way down on oil which is why engine light went on. Returned to dealer after 1,600 km and engine was down two quarts of oil. Told that using two quarts in 1,600 km was within specs,” reads an online complaint by an owner of a 2016 model. Actually, consuming more than one quart or litre of oil over 1,600 km is the generally accepted definition of a worn engine.

In addition to replacing many engines under warranty, Hyundai provides free software updates to monitor knocking engines and other conditions that precede engine failures in 2011-2019 Sonatas and other models. The technology uses existing sensors to monitor vibrations that occur when the connecting rod bearings wear down prematurely, indicating the engine may seize and fail, or in some cases catch fire.

The 2.0T turbo engine has an additional liability: the turbocharger can fail on its own, even before the rest of the engine. A few unlucky owners have changed the turbo more than once.

Other, non-engine-related faults include sunroof assemblies that creak and rattle incessantly (dealers will replace under warranty), Korean tires that are prone to failure, seat surfaces that wear out or discolour, chipping paint and faulty wire harnesses.

If your budget only allows you to buy a high-mileage used car, don’t be tempted by an Alabama-built Sonata. Plenty of owners reported the engine’s death rattle at around the 150,000-km mark.

While Hyundai should be commended for extending its engine warranty to 10 years or 200,000 km for original and subsequent owners, some replacement engines have reportedly failed, too. You could be better off buying an older, higher-mileage Toyota, Honda, or Mazda.