Every week, wheels.ca selects a new vehicle and takes a good look at its entry-level trim. If we find it worthy of your consideration, we'll let you know. If not, we'll recommend one - or the required options - which earns a passing grade.

Join the Conversation (0)
Like most automakers, Mercedes-Benz is wading headlong into the EV arena, introducing all-electric takes on their legacy wares faster than one can say “übergehen das auto.” Kicking off with some of their larger offerings, as most companies are wont to do, M-B has now lifted the covers off its EQB 350 4MATIC, an all-electric crossover that’s right-sized for many city dwellers where traffic is snarled and parking is tight.

At present, the EQB is offered in one flavour to Canadians – the EQB 350 4MATIC. It is priced at $75,700 and powered by two electric motors, meaning all-wheel drive is part of the deal. A 70.7 kWh battery has a targeted driving range of 365 kilometres on a full charge. This number aligns with our testing of a unit in Germany where we found the EQB quick to harvest electrons under regenerative braking.

A grand total of two colours, Polar White and Night Black are $0 items, with most other options like the nifty Rose Gold costing $890. Popping for the Patagonia Red will add $1,400 to yer bill. The EQB, like the GLB, is decently handsome and has the squared-off air of a mini G-Wagen about it. There are two appearance packages on tap. Priced at roughly $3,000 each, they imbue the EQB with AMG-like styling cues including a ‘grille bar’ which does liven up the nose but will confound the logic-thinkers in your circle of friends since an electric car does not need a grille, simulated or otherwise. Note that customers must add a $1,900 leather trim package on top of these styling options, driving the price northward even further. 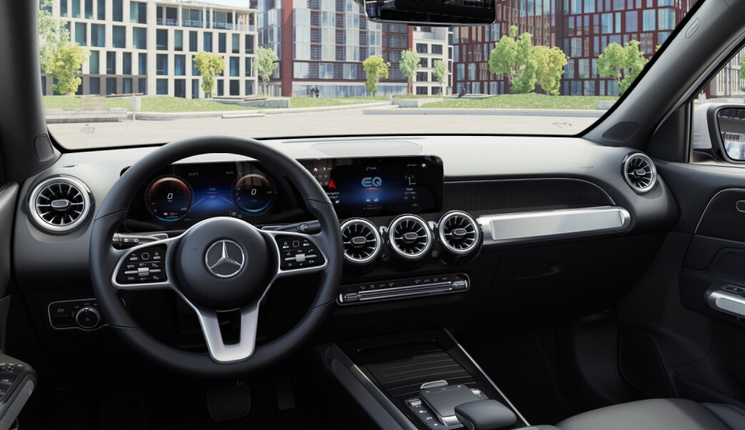 Besides, it’s not like the EQB comes with downmarket cloth seats. The brand’s ARTICO upholstery does a dandy job of simulating the real thing without the need to peel cows and is available in a smattering of colours. A brace of metal-like dashboard trim is on offer but those looking for the warmth of wood will need to spend extra on that detail. A jam-them-in-there set of third-row seats are $1,300 and not recommended.

Two options packages are on the docket for this year’s EQB. First is a Premium Package costing $5,000 which adds a dandy Burmester surround sound system and augmented reality overlays for the satnav. A heads-up display and 360-degree camera rounds out the tech. Choosing to layer on the $3,000 Intelligent Drive Package will add the likes of evasive steering assist, active brake assist, and other driving helpers designed to ward off fatigue on long journeys.

This is a rare Base Camp, insofar that our musings broaden to encompass the gasoline-powered variant of our subject. If a customer is bound and determined to go fuel-free with their next Mercedes compact crossover, stick with the EQB 350 4MATIC as presented and resist the urge to add frippery like the $3,500 AMG styling package.

But the EQB’s main competitor is, arguably, its GLB cousin. Plunked on comparable bones, the two vehicles even look similar – though their prices are a world apart. An entry-level GLB 250 starts at $48,900, but it’s worth noting that car’s power and feature count are lacking compared to the loaded-as-standard EQB 350. All the same, even bumping up to the AMG GLB 35 dents one’s wallet for only $61,700 which is a large chunk of cheddar less than its all-electric relative.