Join the Conversation (0)
For ages, the Honda CR-V has been the defacto choice for many families who are seeking a sensibly sized crossover – particularly one in which they won’t have to give second thoughts to reliability or resale value. The model has been majorly revamped for 2023, giving Canadian family units something new to ponder during the next round of dealership negotiations.

Non-hybrid models (base, LX, midgrade Sport, and leather-lined EX-L) of the new CR-V will all be powered by a 1.5-litre turbocharged four-cylinder engine, making 190 horsepower and 179 lb.-ft of torque. If this sounds familiar, it’s because those specs mirror those of the outgoing model. Atop the heap is a Touring trim which utilizes a 2.0-litre four banger working in concert with a two-motor hybrid system to churn out 204 ponies and 247 lb-ft of twist. Both options dance with a continuously variable transmission.

LX trims get 17-inch steel wheels instead of 18-inch alloys, though all models get standard LED headlamps. The base model also shares a piano black grille and body colour side mirrors with the pricier EX-L, meaning a quick swap to the latter’s wheels could leave your neighbours thinking you spent a lot more than you actually did on yer new CR-V. And, yes – the photos accompanying this article are of the EX-L; that’s why we’re highlighting the visual similarities of those two trims. 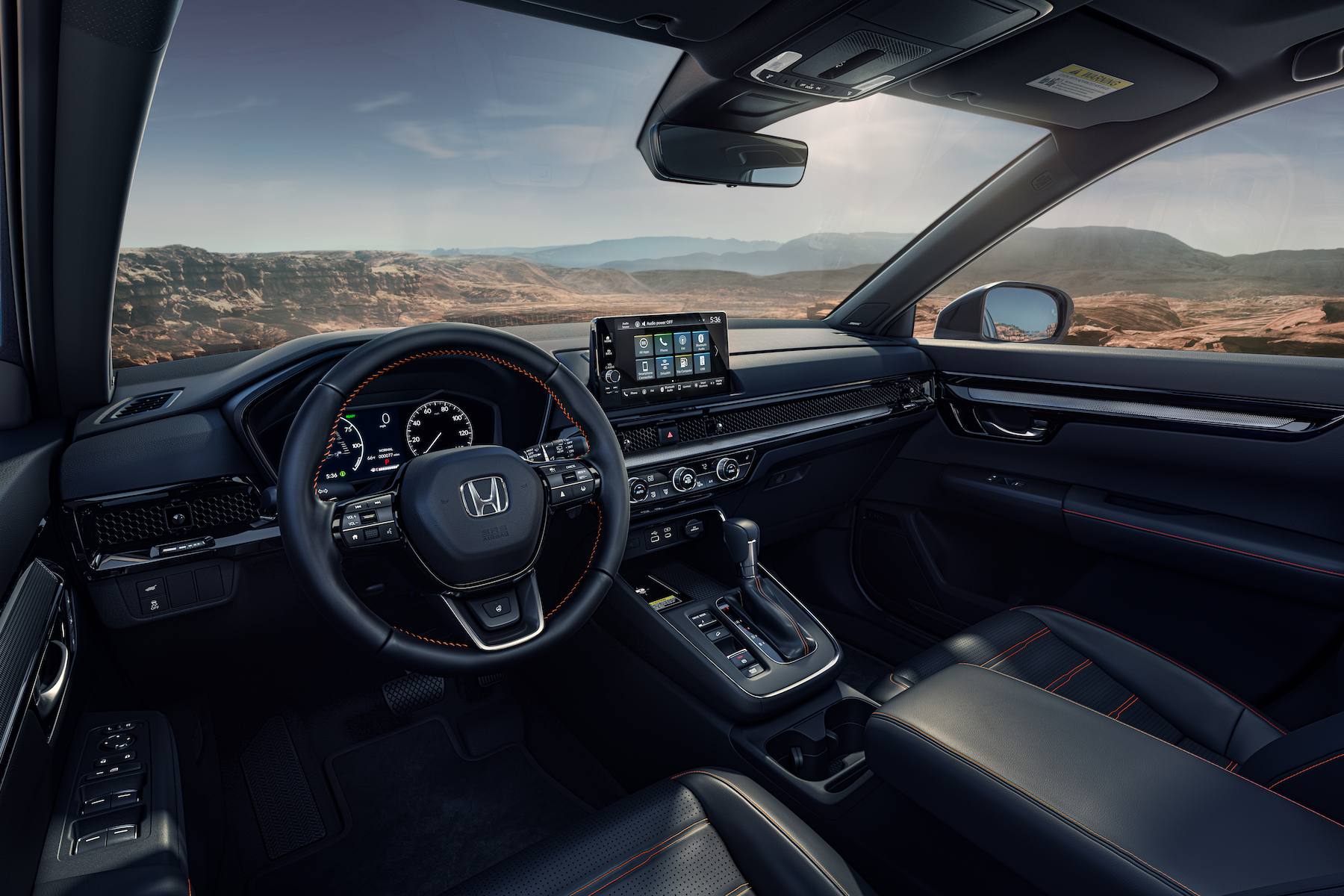 Key driver and passenger safety features are standard on all CR-Vs, such as the excellent Honda Sensing and a total of ten airbags. So, too, is the much-touted new 7-inch driver information interface which is essentially just a screen for snazzy gauges in front of the driver but nevertheless drags CR-V in line with some of its competitors. The love-it or leave-it ‘honeycomb’ strip for the ventilation registers has been taken straight from the Civic, complete with directional joysticks which feel a lot more expensive than the car’s price tag may suggest.

The LX makes do with another seven-inch screen mounted in the centre for infotainment duties; it isn’t until the EX-L do, we find a nine-inch platter and wireless CarPlay. Same goes for wireless device charging, though ports abound (a total of four USBs) for those of us who have remembered to bring the appropriate cables.

Since spending more doesn’t net any extra horsepower – unless you have a hybrid hankering – we’re strongly inclined to stick with the entry-level LX trim. Cloth upholstery is sure to weather daily use by an active family relatively well, and the base model even retains the trick rear load floor which can be lowered, expanding cargo space to an enormous 1,113 litres. 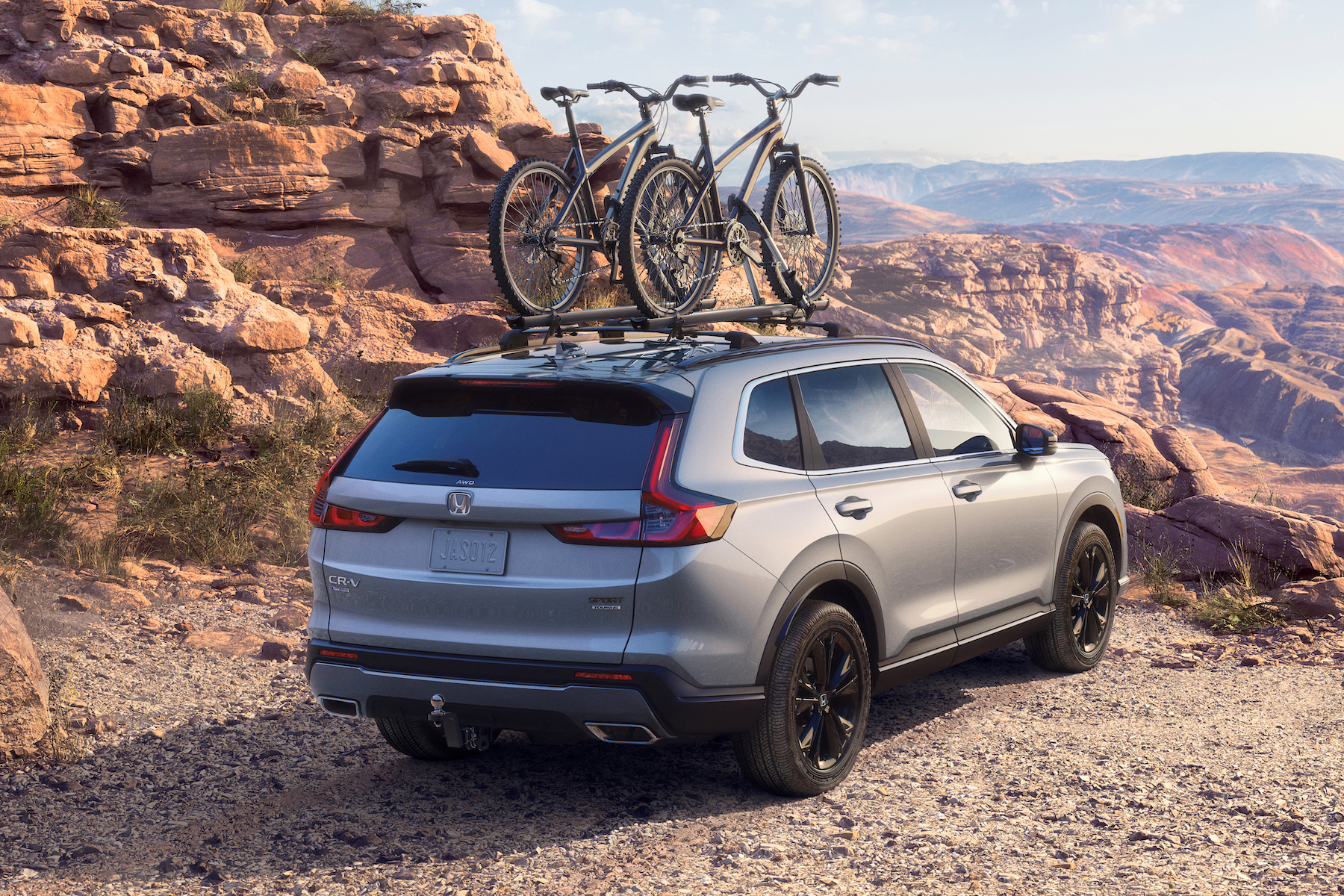 In Canada, all-wheel drive is optional on the LX but standard on all other trims, likely to achieve an attractive price point which they can use in marketing materials. We’ll leave that decision in your capable hands but will note a front-drive vehicle with quality winter tires beats an all-wheel drive rig on baloney skins. It’s all-wheel drive, remember – not all-wheel stop.