Join the Conversation (0)
Midsize pickup trucks, a segment which was seemingly stagnant just a decade ago, has roared back to popularity. Sales are brisk for manufacturers which choose to play in this sandbox, something which encourages them to plow development dollars into these models – which is good for the health of these trucks. A recent recipient of such an overhaul is the Chevrolet Colorado.

For 2023, the Chevy ‘tweener will be available only as a crew cab (four full doors) and a short box. Given that many customers more frequently haul people than cargo, this is a logical decision. As in prior years, the entry level model is called WT – for Work Truck – though it now shares a lot more features with more expensive model than ever before. For this, we can thank the Base Camp’s best friend: economies of scale. After all, it is often cheaper to produce one dashboard style for all trims, even if it means the least expensive example gets a jumbo infotainment system. 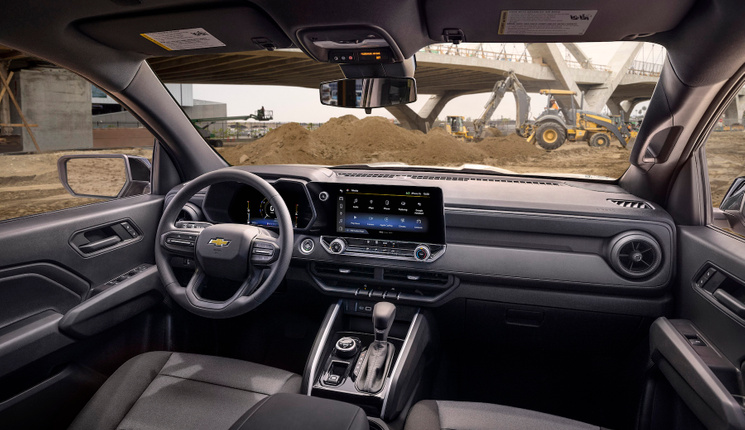 New under the hood for Colorado is a 2.7-litre turbocharged engine, yanked from the Silverado and making 237 horsepower in this application. Torque checks in at 259 lb-ft of twist, meaning the entry-level engine absolutely crushes last year’s base motor in terms of output. Towing is capped at 3,500 pounds. An eight-speed automatic handles shifting duties. All trims share the same wheelbase for cost measures, but the WT has a narrower tire stance than some of the available off-road models.

Paint colours and other details were not released as of this writing, but we do know the WT will come with the 17-inch steel wheels shown in these photos. Interestingly, its bolt pattern is shared with the full-size Silverado so owners can crib a snazzy set from that model if they wish to upgrade. Based on past years, expect the usual smattering of paint choices from the greyscale, with a jazzy blue thrown in for good measure.

Recalling the jumbo infotainment mentioned a moment ago, this year’s truck has an 11.3-inch colour touchscreen as standard kit, making it one of the largest displays in this segment – especially as showing up for duty on the least expensive model. This is accompanied by an 8-inch diagonal digital color instrument display in front of the driver, housing gauges and other info which can be customized to the operator’s content. The days of simply a speedometer and AM radio in a midsize work truck are firmly in the rear view mirror.

Notably, while the bowtie brigade has decided to offer only the 2.7-litre Turbo under the hood, it is available in multiple states of tune. For a few extra shillings, the 2023 Colorado WT can be had with a stout 310 horsepower and 390 lb-ft of torque, an option we heartily recommend. Not only will it endow the truck with power levels once reserved for full-sizers, but it also jacks the towing capacity to a robust 7,500 pounds.

Assuming its price structure will be similar to that of the ’22 model, this year’s WT will be priced a not-insignificant walk from the next-rung LT and off-road(ish) Z71 trims. If one doesn’t mind the lack of exterior addenda such as chrome trim and fog lamps, its new level of standard kit (including that huge infotainment screen)