Join the Conversation (1)
It wasn’t too many years ago that the road to Mercedes ownership in this country began with the A- or C-Class sedans. These days, with consumer tastes skewed to crossover-type vehicles and SUVs, this rung on the ladder is primarily occupied by a machine called the GLA. Compact and sleek, yet casting a distinctly all-wheel drive shape, it is offered in three trims – the least expensive of which is our focus today.

This would be the GLA 250 4MATIC, priced at $43,200 and powered by a 2.0L turbocharged mill making 227 horsepower. A total of 258 lb-ft of torque is on tap over a wide range of engine speed, backed by a dual-clutch transmission with 8 cogs. The ‘4MATIC’ designation is a dead giveaway the GLA is equipped with all-wheel drive, a system which is described as able to send power from front wheels to the rears based on each tire's real-time grip.

As a Mercedes, there is no shortage of luxury features in the cabin as standard equipment. Seats are covered with the brand’s ARTICO upholstery, a type of material which will likely outlast the car. Chairs are heated up front, as are the side mirrors, and there’s no last-minute digging for keys thanks to a keyless go system. A standard panoramic sunroof permits nighttime stargazing while waiting for the kids to awaken from slumber (you’re not going to disturb them by unbuckling their belts and taking them in the house, right?) and twin 7-inch displays – one for gauges ahead of the driver and one in the centre for infotainment – do their level best impression of expensive E- and S-Class models. Those triple ventilation registers do the same work and look far more expensive than the GLA’s price tag implies. 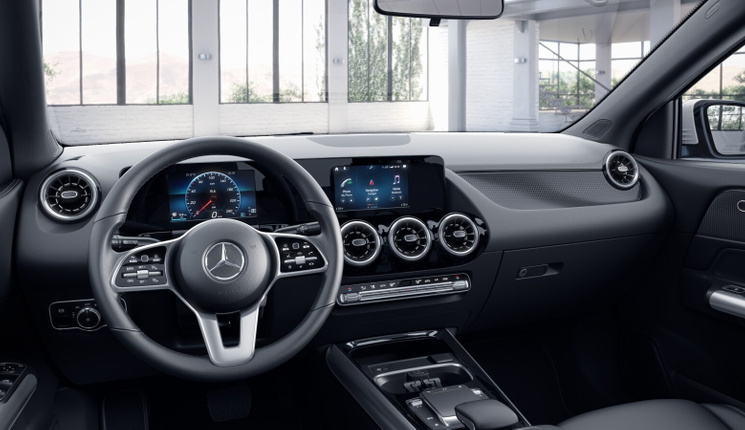 Outside, the 18-inch wheels pair well with the enormous tri-star logo on the GLA’s grille. Remember to back into the driveway if you bought this thing to impress the neighbours. Polar White and Nocturnal Black are the only $0 paint options. Popping for one of the AMG body styling packages will make your base GLA look like one of the more powerful (and expensive) trims, but they also require the selection of costly feature packages.

German companies tend to be the masters of offering enough options to pad a car’s base price by a great amount, and Mercedes is no different. We will suggest the $150 stand-alone LED logo projectors which beams a crisp M-B logo onto tarmac from underneath the side mirrors; it’s a neat party trick sure to evoke grins (including yours). 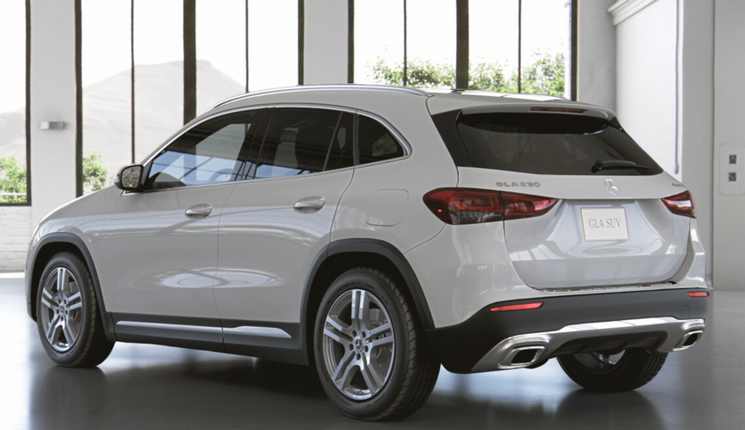 So-called ‘spiral optic’ dashboard trim can be replaced by natty open-pore wood for no cost, and the really-should-be-standard-but-isn’t heated steering wheel is a $250 option. It’s strongly recommended buyers choose this path instead of getting a costly options bundle which includes the heated tiller but also packs on items most of us are unlikely to ever use. So equipped, customers will find themselves at the helm of a pint-sized crossover whose impressive brand recognition will likely outstrip its dimi