The Prius is moving upmarket. Will its buyers do the same?

Join the Conversation (0)
The days of the Toyota Prius as an eco-friendly oddball are over. With Toyota's lineup most of the way to 15 electrified models, the company decided it was time for a change. Say hello to the aspirational Prius. A more upscale and more expensive vehicle that just happens to get one of the best fuel economy ratings on the market.

When Prius hit the Canadian market in 2000, it was a revolution. The subcompact with an electric motor could deliver fuel economy numbers other automakers could only dream of. Today, the car is in its fourth generation and the market has begun to catch up. Hybrids from other companies can beat its fuel economy and can do it with much more traditional bodywork. Even in the same showroom, Toyota has the Corolla Hybrid that can do nearly everything Prius can, including offering electric all-wheel drive.

Drastic measures were needed, but there were two very different camps. Akio Toyoda, the man whose name is on the door, wanted to make a car that was more of a "commodity," we're told. A car that was intended to be a fleet model. A taxi. Others in the company? Prius is love, they said. It was the love side that won. 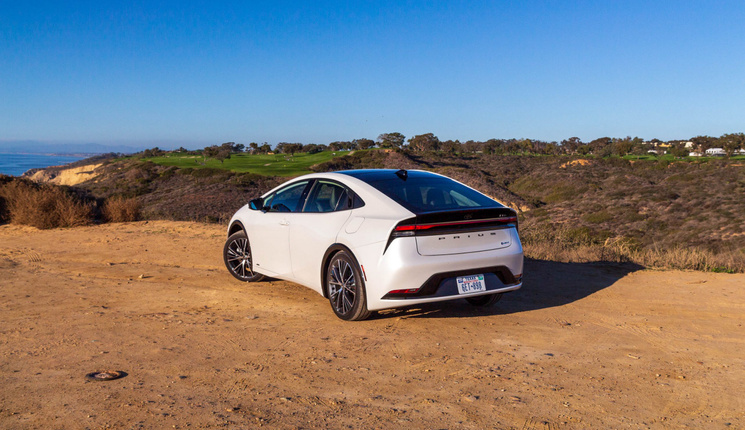 The result is what you see here, the 2023 Toyota Prius. Making it lower and wider than before, cutting 50 mm from the roofline and pushing the wheels outward, contribute to the car's much more athletic stance. Because the peak of that roofline has been moved rearward significantly and because of the short decklid the Prius looks shorter than the previous generation. It's actually longer than the car it replaces.

A car that looks like it has been plucked directly from a sci-fi film. A car where you expect a robot to be behind the wheel, or for the wheels to tuck up underneath as it takes to the skies. Where the Prius is going, we don't need roads! 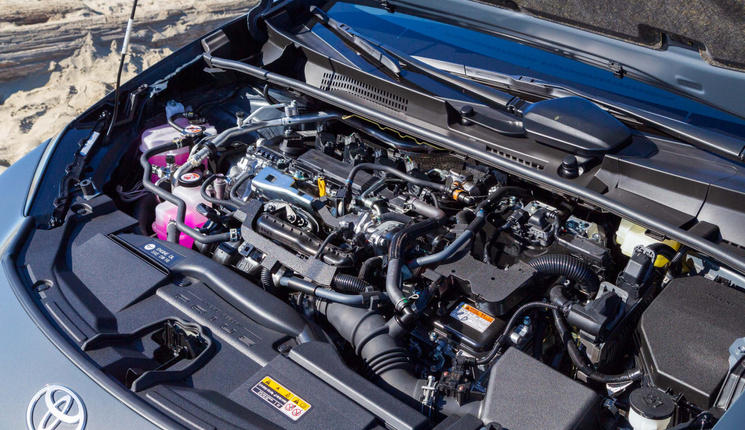 Prius does need roads, though, so Toyota has greatly enhanced the experience of driving the car. The 1.8L four-cylinder that made 96 hp on it owns and 121 hp when the electric motors were doing their best, is gone. In its place, a 2.0L engine that makes 150 hp.

A new front motor produces 111 hp and 152 lb-ft. The old rear motor made just seven horses, enough for hints of AWD, and is gone. Replaced by one that makes 40 hp and 62 lb-ft. Full-speed AWD is standard, versus the old system that was both optional and only in operation below 70 km/h. Total output is now 196 horsepower with an electric shove from a stop that reduces the "rubber-band" effect that's common to CVT-equipped cars.

So no longer is the Prius a slug, slowing down traffic on highway ramps. It's not a sports sedan, but it can now get from 0-100 km/h over 25 per cent more quickly at 7.5 seconds. More importantly, it has enough power to make quick work of passes on the highway. And to get you out of a sticky situation where a blast of throttle is the best way to do it.

The 2.0L engine is still noisy, but it is much quieter than in Prius models past. The extra electric power and a new lithium-ion battery pack allow the car to spend more time in electric mode as well, meaning it is EV silent more often. Especially in town, where the gas engine's noise is most obvious. 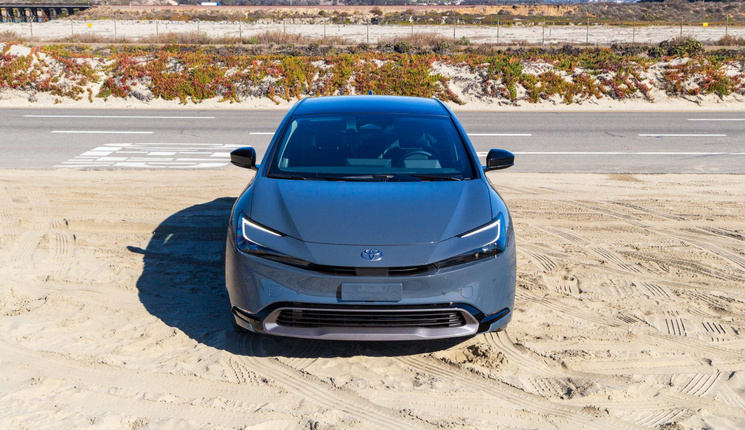 Toyota has also added one of the best EV tricks to the Prius as part of the car's Electronically Controlled Braking system. The system does a better job of managing the transition between friction and regenerative braking but also incorporates adaptive regenerative braking. Lift off the accelerator as you travel downhill or approach a slower vehicle and the Prius will slow itself using regeneration.

The system can't stop the car, but it will bring it from city speeds to a walking pace, matching the deceleration of the vehicle in front of you. This adaptive regen is still not offered on every EV, and this is the first hybrid we've seen with the trick. Not sold as a safety feature, it's small touches like this that make the car less stressful to drive around town and in a slow-moving traffic jam.

Ride and handling are also improved. Despite the low-profile rubber, this is a generally comfortable car in town and on the highway. The steering offers little feel as to what's happening at pavement level, but is well-weighted for both highway driving and low-speed maneuvers.

With every successive generation, we expect a more fuel-efficient Prius. Toyota says this one manages that, though it doesn't use less gas than the old one. It doesn't even use less than a Corolla Hybrid. How is it more efficient then? Because it's larger and more powerful, but has the same 4.8 L/100 km combined consumption rating. We can't help but think that trading the standard 19-inch wheels for something a bit smaller would have sacrificed some style but boosted that figure. 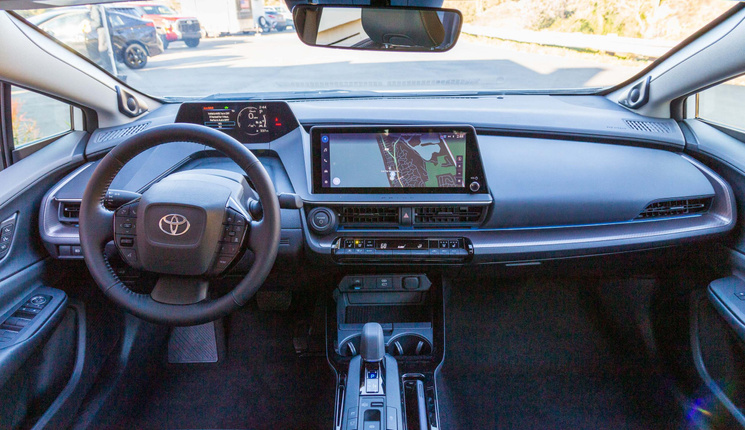 Inside, the 2023 Toyota Prius is a much more upmarket model than the car it replaces. Less economy car and more entry-premium. That means materials that look more expensive and more refined. More pleasant to the eyes and touch. Even the controls have a solid feel that the previous-generation car was lacking. It's not a $25,000 car anymore, this one will start in the high $30k range and the dash reflects that.

There are some trade-offs in the cabin, of course. That elegant roofline, for example, isn't good for passenger space or visibility. The long rear-leaning A-pillars create longer blind spots. For me, enough to hide multiple lanes of traffic at a four-way stop or other intersections. In the back seat, it cuts significantly into headroom. The top of the roof bubble is between the front and rear seats, so no passengers get to take advantage of maximum space. Six-footers are probably not going to be happy for anything more than a short trip. Tall or long-torso riders won't be happy if your taxi shows up and it's one of these. 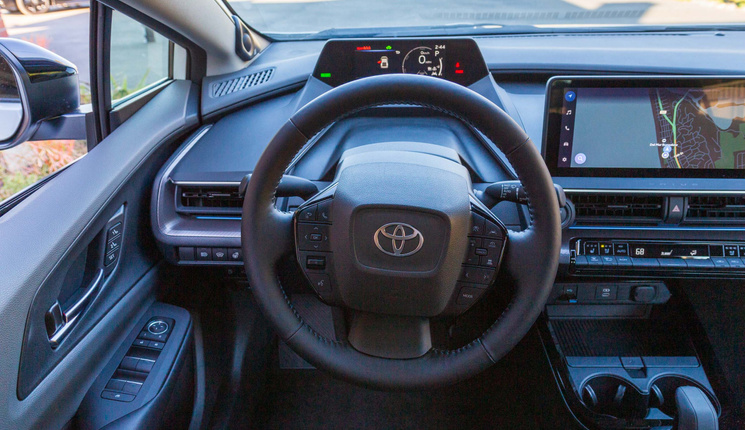 Toyota's oddball centre gauge cluster is gone, replaced by a 7.0-inch screen that sits high up on the dash directly in front of the driver. The screen shows speed, hybrid information, and nav or audio details, and offers high levels of customization. Taking advantage of the glare-free display not needing a bezel, the new layout gives the driver the same eyes-on-the-road benefits of the old centre screen without the strange centre pod.

The screen isn't the only thing Toyota does to help the driver watch the road. That blue light strip in the dash is on steady-state in normal driving. If you're stopped at a light and the traffic ahead pulls away the strip flashes. A little easter egg that lets you know that it is time to go. And time to stop looking at your phone behind the wheel.

XLE-trim has a centre screen measuring 8.0-inches across, Limited comes with a 12.3-inch unit. Either way, you get wireless versions of both Android Auto and Apple CarPlay and Toyota's latest multimedia system with voice control. The natural speech system can handle plenty of tasks, even turning on the wipers if you don't want to reach for the stalk. 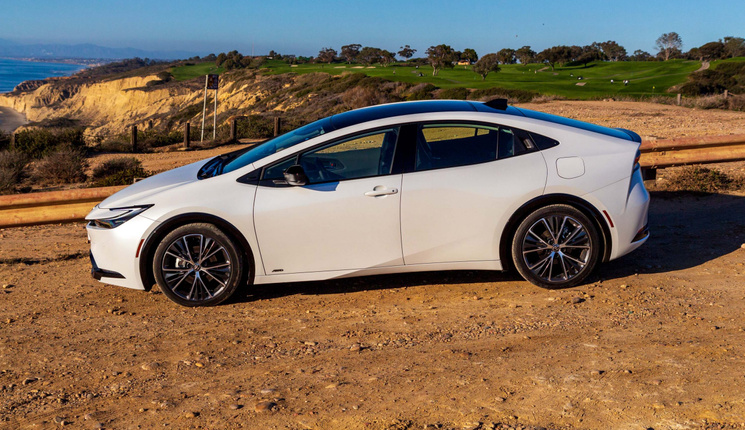 Toyota Safety Sense 3.0 is standard on all grades of the Prius. It comes with a pre-collision system with pedestrian detection, full-speed radar cruise, lane departure with steering assist, road sign indicators, and a few other handy bits of kit. Front and rear park assist, blind spot monitoring, and rear cross-traffic alerts are included with both trims headed to Canada, while Limited adds a panoramic camera view.

The 2023 Toyota Prius will be able to park and un-park itself from both parallel and perpendicular spaces. Phone-as-key will also be offered, letting drivers get in and start the car with their smartphones and share access with other users.

This is the biggest shakeup of the Toyota Prius since the model was first introduced. It's now a stylish and upmarket car, but that poses an all-new set of challenges. It's now ten grand more than a Corolla Hybrid and priced right on top of a RAV4 Hybrid. Toyota is banking that buyers still want cars and that this new model will see sales much higher than the car it replaces when it hits dealers early next year.

We're not confident that Toyota will find that many sedan buyers no matter how good the car is. We are sure, though, that with the new Prius, Toyota has made a darned good effort to try and bring people back into the sedan instead of a larger and more wasteful crossover.