Join the Conversation (0)
People may not realize it but for all its work as a taxicab, people mover, and driver’s ed car, the Toyota Corolla actually has a pretty storied past in the world of motorsport, most notably the World Rally Championship where Carlos Sainz Sr. piloted one to the WRC Constructor’s Championship in 1999.

It's that pedigree Toyota’s trying to tap into today with the release of the GR (“Gazoo Racing”) Corolla. Like Sainz Senior’s car, it gets a punchy turbocharged motor (although, unlike his, it’s a three-cylinder as opposed to a four-cylinder), and like Sainz Sr’s car, it comes with AWD as standard. Unlike Sainz Sr’s car, however, it comes equipped only with a six-speed manual transmission across all three of its trims – Core ($45,490), limited year-one only Circuit ($53,990) and the altogether mad Morizo ($59,990).

Now, you don’t get a fancy Castrol racing livery (I’m sure the aftermarket will take care of that, however), but you do get 18-inch gloss black wheels wrapped in Michelin Pilot Sport 4 tires, an aggressive front splitter, XL rear spoiler, and triple exhaust system. The Circuit model, meanwhile, adds red brake calipers as well as a carbon fibre roof. 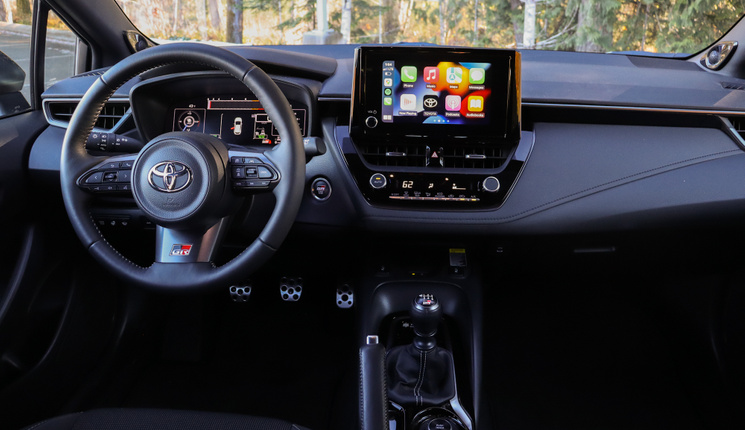 Inside, the theme continues, but to what extent depends heavily on which trim we’re talking about.

The Core model gets aluminum sport pedals, contrast grey stitching, and aluminum accents, while the Circuit model gets red stitching on suede-trimmed heated seats with “GR” logos on the headrests.

The Morizo, however, gets the biggest change, that being the complete removal of the rear seats and the addition of more aggressive front seats. That’s right; what we have here is a five-door mass-market hatchback with nothing in back (the rear door speakers are also gone) save for some carpet. You’ve heard of the Atkins Diet, but this is the Morizo Diet, which includes the deletion of rear window switches, rear wiper, and other fatty bits like heated seats and steering wheel plus an added 22 pound-feet of torque for a total of 295, though the 300-horsepower count remains the same as the other two. Just think of it as a Porsche GT3 RS without the $250K-plus price tag. 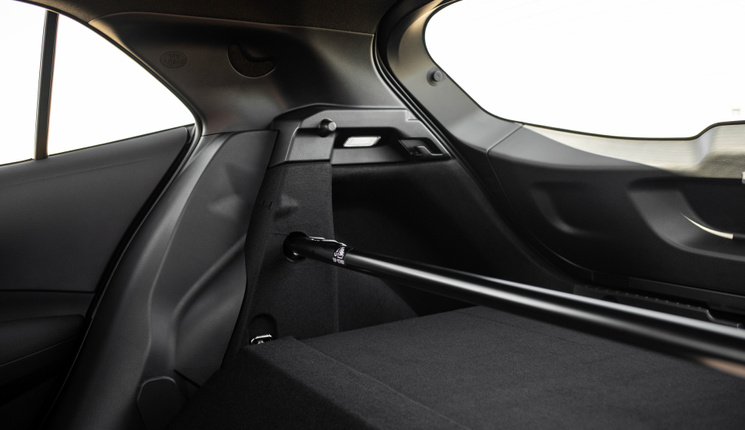 Which is all great, but one has to ask whether or not someone is going to be willing to pay nigh-on 60 grand for a Corolla with no back seats.

We’ll come to how all of that affects performance – as tested on the track at Vancouver Island Motorsports Park -- in a minute, but first a look at the Core model and how it changes things on the open road.

While you have the same tall seating position and the same 8” infotainment display as a standard Corolla, you do get a unique digital gauge cluster. Add the GR logo on the steering wheel and shift knob plus the metal pedals and you can tell there’s just something special about this particular Toyota. 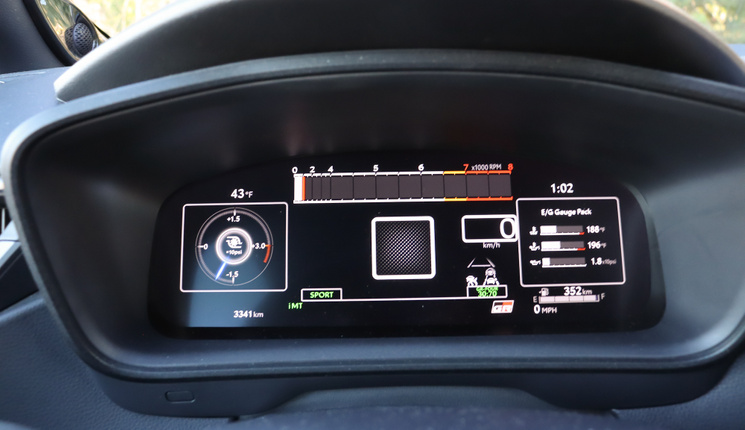 Firing it up serves to drive that point home even further; a great off-beat warble is emitted – there is an uneven cylinder count, after all, and three tailpipes – that had me thinking of the car whose recent demise could very well be to this particular Corolla’s benefit: the five-door version of the Subaru WRX and its STi twin.

Thanks to a well-tuned clutch take-up, rolling smoothly away from a stop in the GR is no big deal, though the shifter’s somewhat long throw does take a little getting used to. Once you get into a rhythm, however, this is a car that flows right along with you. Power comes on in a fairly aggressive manner – peak horsepower doesn’t hit until 6,500 r.p.m. with peak torque arriving at 3,000 r.p.m. so you do have to wring its neck a little to get the best out of it – but that’s what makes it so damn fun.

You find yourself really grabbing those shifts a little more than you may typically on a winding road, but you do it because you’re rewarded with such response when you really get it right, really drop it into the meat of the powerband. It’s a car that rewards when driven with aggression, and I won’t fault it for that. 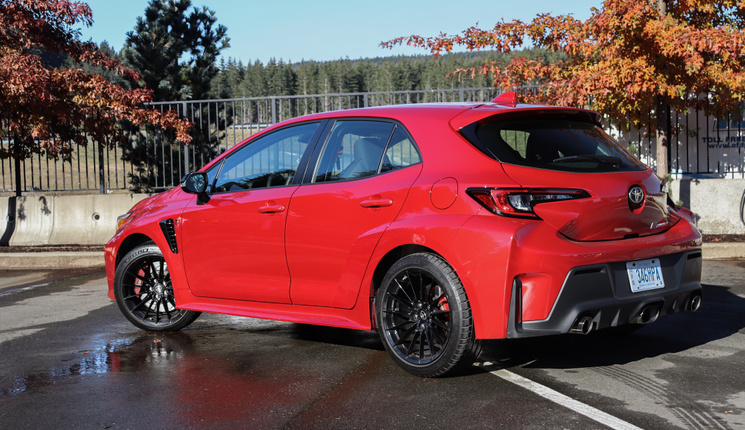 Things change a little on the handling front – thanks to extra welds, extra underbody bracing and the standard fitment of front and rear Torsen limited-slip differentials, this is a car that flows nicely with your inputs which don't need to be quite as whip-snap as they do when it comes to the powertrain. It just hunches down and beds itself in as you let those sticky Michelins transmit everything to the tarmac below. Add a recalibrated suspension for a massive reduction in body roll and you’re off to the races.

Off to the races, that is, once you’ve selected which of the three torque splits you’re provided with: 60/40 front/rear, 50/50 or 30/70 for an almost RWD-like feel. Toyota recommends the 60/40 for everyday driving, the 50/50 for track use, and the 30/70 for use on slower, windier roads. The difference between the three is properly palpable as the rear-end becomes that much more lively, or you get that much more pull out of the corners – it again evokes feelings of the STi, with its C-Diff whizz-bangery.

Speaking of “properly palpable”; the change to Morizo spec – so named for Toyota chief Akio Toyoda’s racing moniker -- is most definitely that. 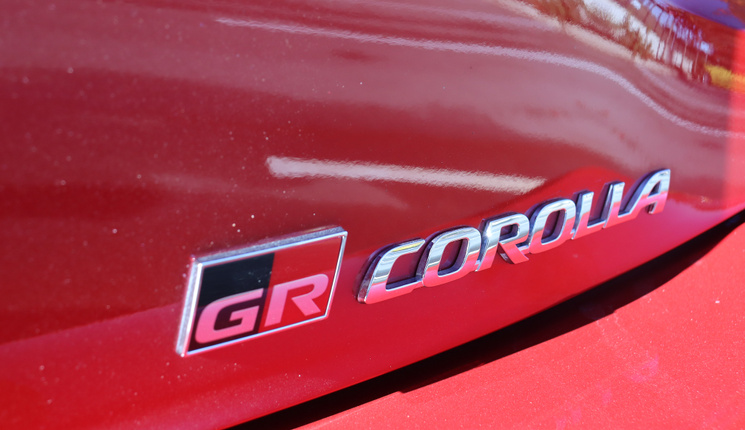 Right off the hop on the track, the Morizo springs forth with that much more intensity and gumption, and as you start to twist that wheel, it moves through the bends like the not-so-far-removed-from-a-racer that it is. Instant turn-in is followed by the body moving gamely through turns on the heels of the vice-like grip the Morizo-only Michelin Cup 2s have on the tarmac below. There’s more power, the gearbox gets closer ratios, and the fact that you’re hauling so much less around feels unlike any hot hatchback you’ve driven before.

Spectacular as it is, the Morizo isn’t for everybody. It’s incredibly specialized and the price tag reflects this. The real question, though, is how well this performance Corolla’s more accessible trims can put the wood to the likes of the Honda Civic Type R or even the Volkswagen Golf R. Having only driven the latter, I can tell you that the Corolla is the more on-the-nose car, a true performance model. It’s an assault on the senses and one of the most thrilling compacts we’ve seen in Canada in quite some time, if not ever.

And it’s a Toyota Corolla. The world we live in.