Toyotas first mainstream EV is here but is it enough to take on the competition?

Join the Conversation (3)
SAN DIEGO, CA - Believe it or not, when it arrives in showrooms in just a few months, the Toyota bZ4X is really the first full EV (or BEV for “battery-electric vehicle”) that the Japanese giant has made widely available to the public. Yes; there was a very limited run of EV-powered RAV4 crossover in the late-‘90s and early-2010s, but their range was as limited as their availability.

Indeed, Toyota’s heavily invested in the hybrid space – for everything from luxury sedans, to SUVs, to taxicabs – and since the battery tech and materials required for those types of vehicles is very similar to that which is required for a much more limited-use BEV, Toyota had to choose in which basket to put its eggs. Until now, that’s mainly been that of hybrids and plug-in hybrids (PHEVs). 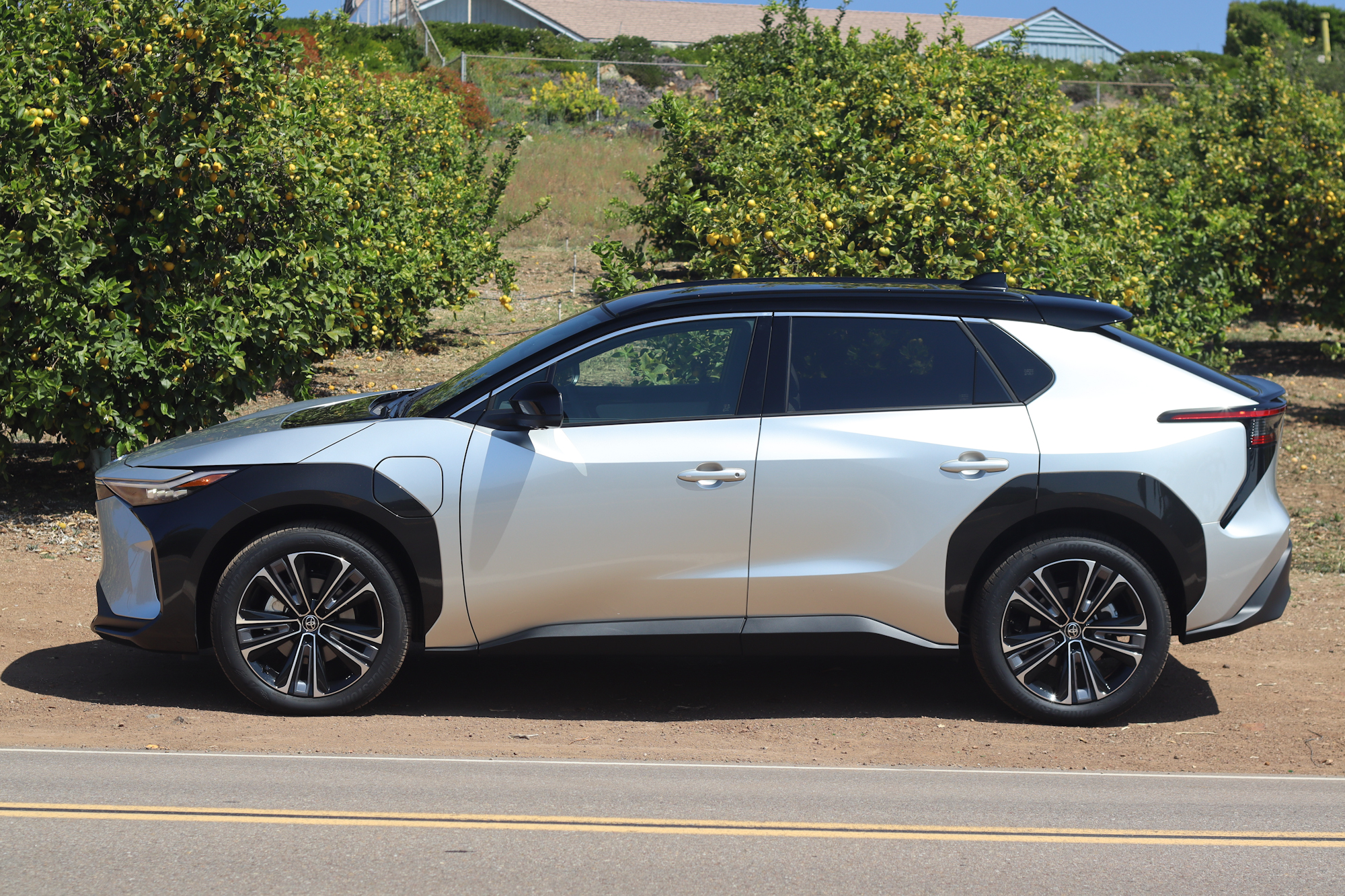 Enter the bZ4X (BZ = “Beyond Zero”, and it will be part of the nomenclature for other Toyota EVs going forward), a full-range BEV and while they won’t build as many of these as they will the similarly-sized RAV4 (obviously), we’ll be seeing far more of the bZ4X on North American roads than we ever saw of the RAV4 EV. They will be limited to BC and Quebec in Canada in their first year, however.

Styling-wise, you have to look pretty close to make a connection with other areas of the Toyota/Lexus line-up; if you look reeeal close at the rear fascia, for instance, you’ll see some elements of the current Prius, the previous-generation Mirai sedan and even – believe it or not – the LFA supercar. Yes, it’s a bit of a stretch, but it’s there.

The front end, however, is completely unique and ultra slippery for increased range. It’s low on clutter, but I think that perhaps there could have been a few added contrast-colour details there to be better in keeping with the very present contrast-colour wheel wells. Those, however, are an XLE-only option; single-tone paint is standard fare.

Size-wise, the bZ4X is longer and has a longer wheelbase than the RAV4. It’s wider and sits a little lower and considering that you don’t have as much running gear here as you would in the RAV, interior space is generous. 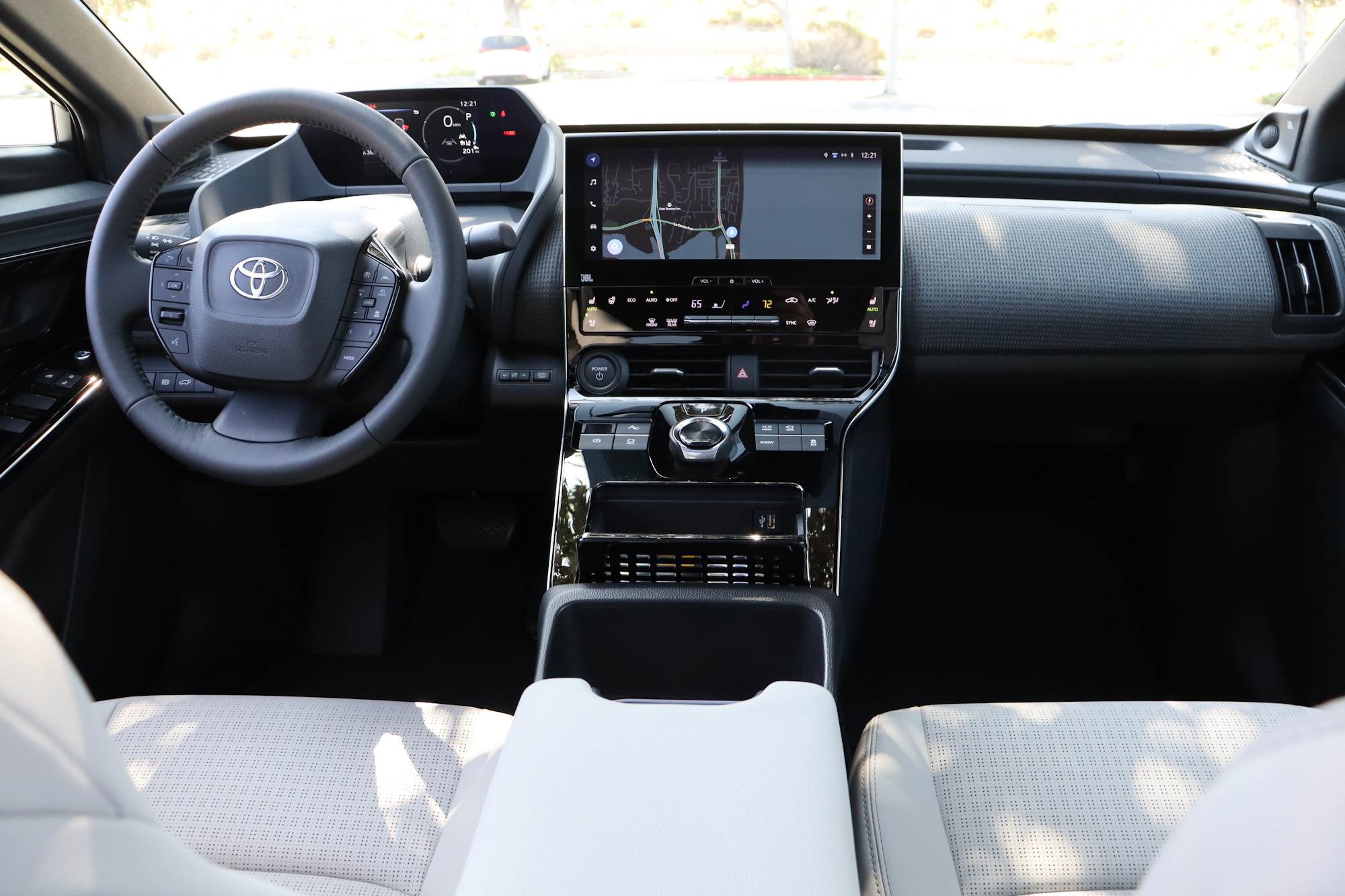 Styling-wise, the interior is a nicely futuristic spot with two main focal points: the optional 12-inch infotainment display (an 8-incher is standard) and the steering wheel whose mounting geometry reminds me a little of classic Citroëns whose steering column doubles as a spoke.

In the bZ4X, it appears this way because the gauge cluster is mounted so far back and high on the dash—basically nullifying the need for a head-up display—that the steering column appears that much longer. Speaking of a HUD; I don’t mind them, but not having to worry about my polarized lenses hiding the image is a nice bonus. I do worry, however, that the high gauge position could make it tough to see out for some drivers. 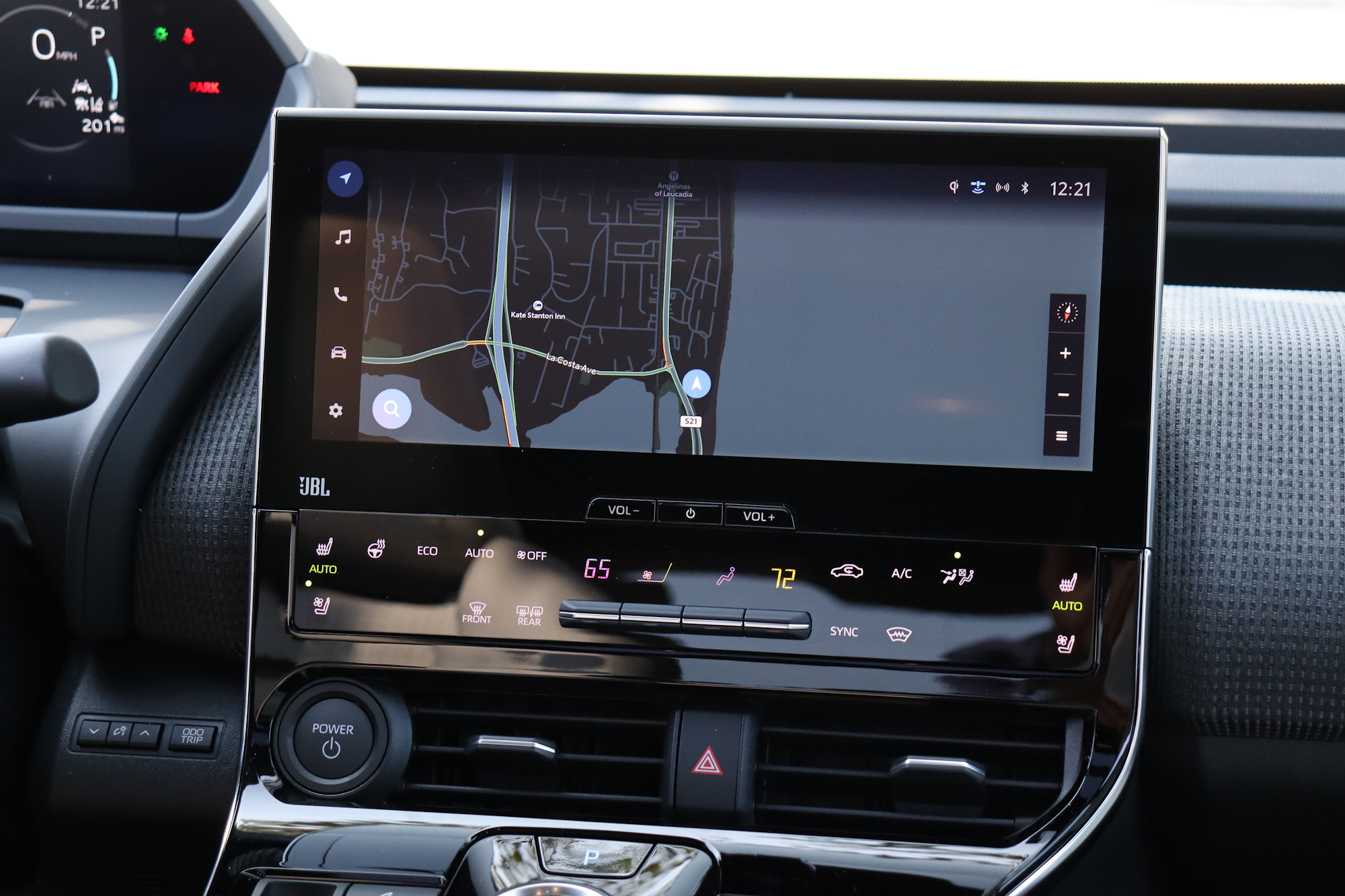 The central display, though, especially in the extra-large size seen here, will never have that concern. It is massive, the graphics are ultra-sharp and wireless Apple CarPlay and Android Auto come as standard. It can also respond to voice commands from either the front passenger or driver.

It’s mostly a comfortable place to sit, although as a taller driver, I found the footwell to be a little snug as I tend to have to splay my legs out a little more as I drive, and that’s made tougher here. The tall centre console brings controls like the transmission control joystick (bit awkward, that) and drive mode select closer to hand. It’s also where the wireless charger is located, which you can keep hidden under a windowed door to reduce driver distraction. 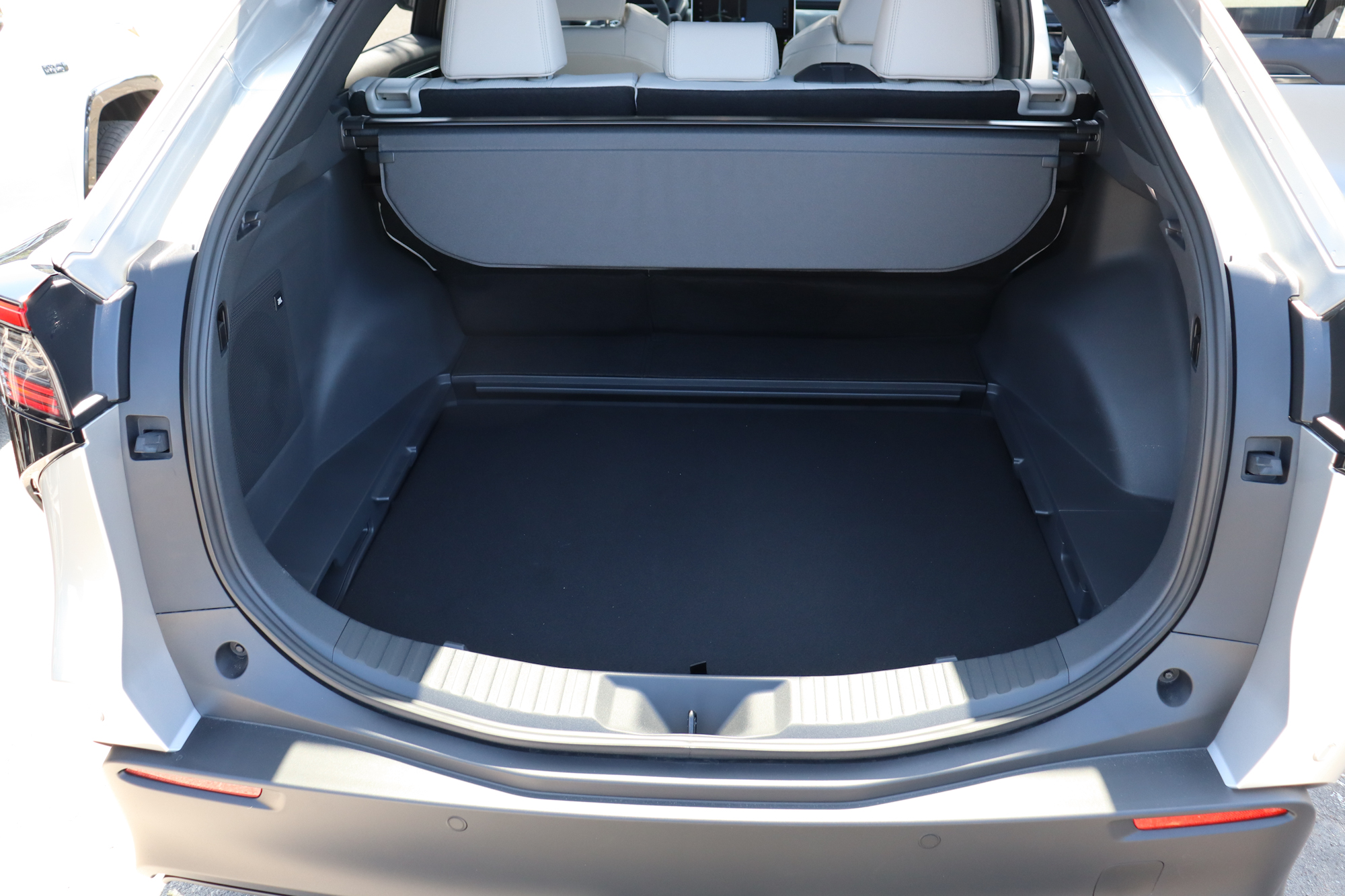 Power on the single-motor FWD model ($44,990) is rated at 201 horsepower, while the dual-motor AWD model ($54,990) gets a 13 hp boost to 214. The FWD vehicle has the better claimed range – 406 km – to the AWD’s 367 km. During my test of the FWD model, however, I actually started on a full charge with 485 km and as I drove, my remaining range accurately reflected my km driven, which is always a good sign. The AWD vehicle gets the larger battery, but the difference isn’t huge as its 72.8 kWh offering is only 1.4 kWh larger than that which is found in the FWD car.

Charging on a DC fast charger in optimal conditions should return 80% of the charge in about one hour; that’s fine, but it is on the slower side (maxing out at either 100 or 150kW, dependent on battery supplier) when you consider the competition from the likes of the Hyundai Ioniq5. This all comes with a bit of an asterisk, of course, because charge times vary wildly as conditions get colder, which they often do in Canada.

As is the way when it comes to EVs, the power delivery on the bZ4X is instantaneous, which makes getting away from stoplights and zipping in and out of traffic that much easier. I’ll always love that about an EV although the bZ4X makes less power than the Ioniq5 and you can feel the deficiency as speeds increase. You will feel a little more “zip” from the AWD model, of course, but I didn’t find the differences to be all that marked.

AWD cars get a version of Subaru’s X-Mode AWD system (the bZ4X shares its platform with Subaru’s upcoming Solterra), which adds snow/dirt and snow/mud modes that can brake certain wheels for a limited-slip effect, or automatically angle the front wheels to help clear away snow or mud. 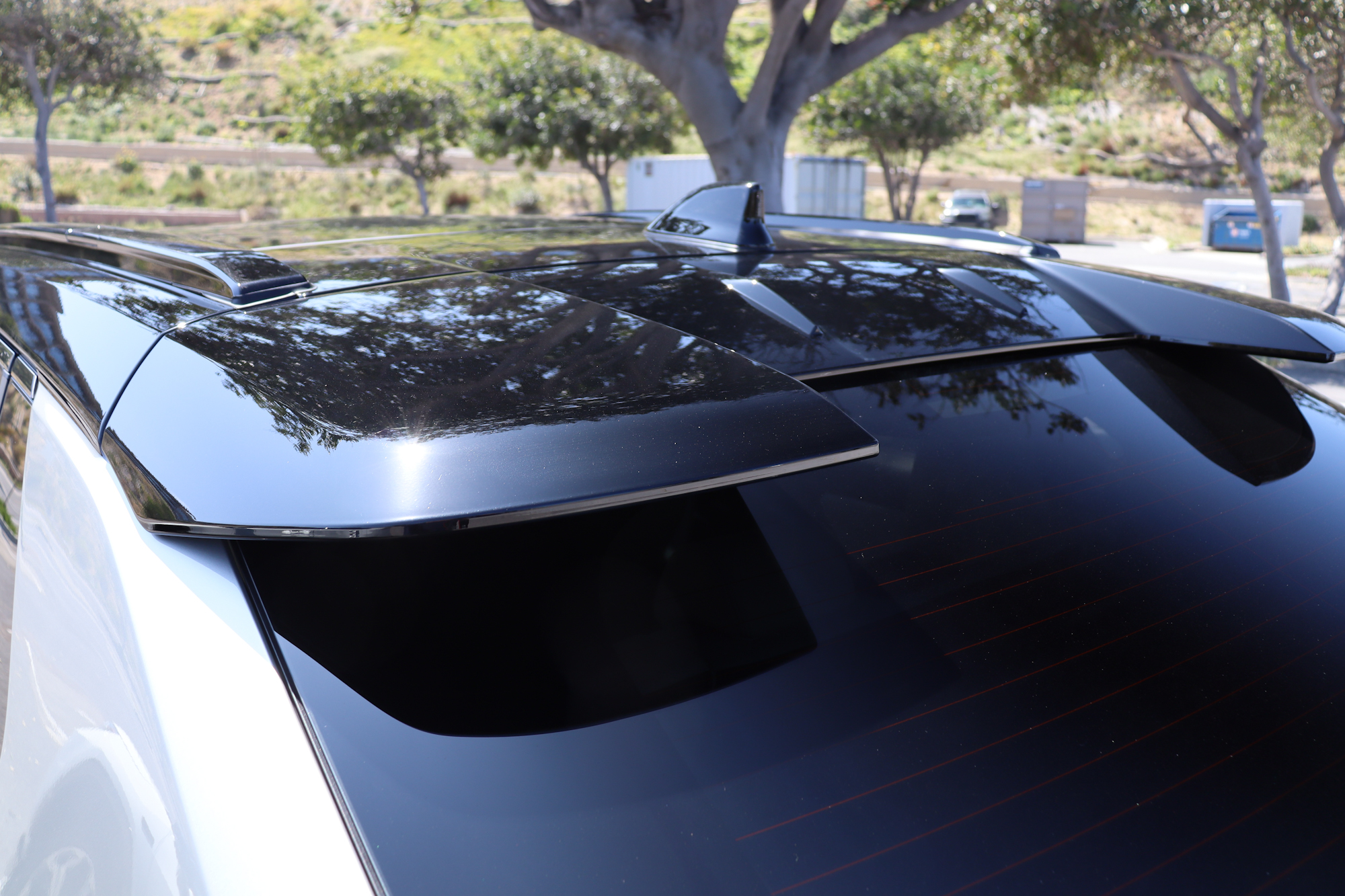 Of course, the bZ4X isn’t supposed to be a performance vehicle, so they’ve made sure to get the important bits right, and that’s the ride and handling. Handling is improved thanks to all that heavy running gear sitting nice and low in the chassis to reduce body roll, while the ride is a smooth, comfortable and quiet affair thanks to great damper settings and smart use of sound deadening materials and glass.

Of course, the roads in Southern California in perfect conditions where we were testing these are a far cry from some of the stuff we deal with in Canada, but what I experienced there does bode well.

I do wonder, however, if the fairly average range figures and that slightly slow fast-charge time will be a sticking point for some buyers who are considering this against the Ioniq5, for example. That being said: if that is the case, the bZ4X’s interior space and amenities, as well as its excellent on-road dynamics will surely win it back some points.