Join the Conversation (0)
PICTON, ON - A few years ago, Subaru came up with a big solution to a small problem.
The small problem? Some Subaru customers with growing families were outgrowing Subaru’s lineup of two-row, five-passenger people movers.

The big solution? A newly-introduced 2019 Subaru Ascent - the biggest Soob ever, complete with three-row, seven- or eight-passenger seating and enough interior room and cargo space to vie with family-sized competitors that used to lure those customers away - the Toyota Highlander, Nissan Pathfinder, Honda Pilot, Ford Explorer, Mazda CX-9 and others. 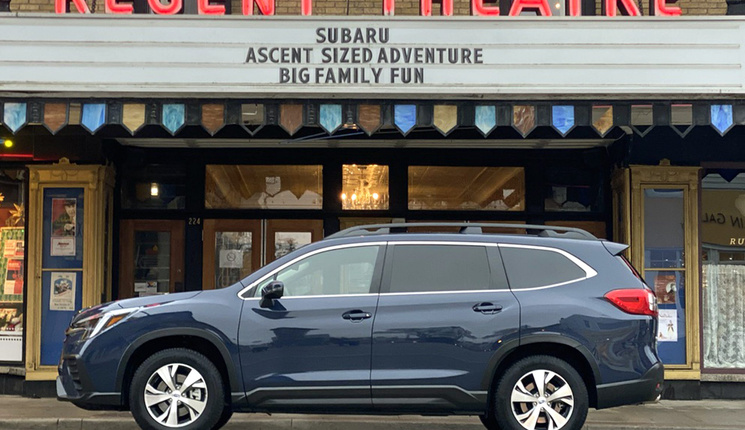 In only its fifth year of production, the Subaru Ascent hasn’t really been around long enough to need major dynamic or dimensional changes. But, yes, the face is a little different.

The Ascent mirrors some of the more recent styling cues of the Outback and Forester. A bolder front end features a bigger, more prominent grille, a new front fascia with bigger air intakes and new bumper covers, bracketed by more dramatic front LED headlights as well as a new LED foglight design available in higher trim levels. There are new wheel designs and, in back, changes to rear liftgate styling along with new Konoji (C-shaped) LED taillights. 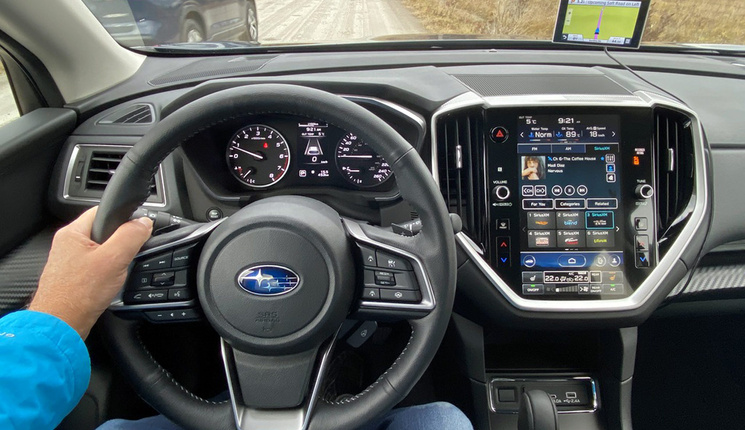 Among the changes, the tablet screen replaces HVAC knobs with touchscreen buttons. That’s the kind of thing I’d normally gripe about but the large screen allows for easy access to all controls. And while there’s a lot of info and controls to look at on that tablet, drivers should adapt to its sensible layout quickly. 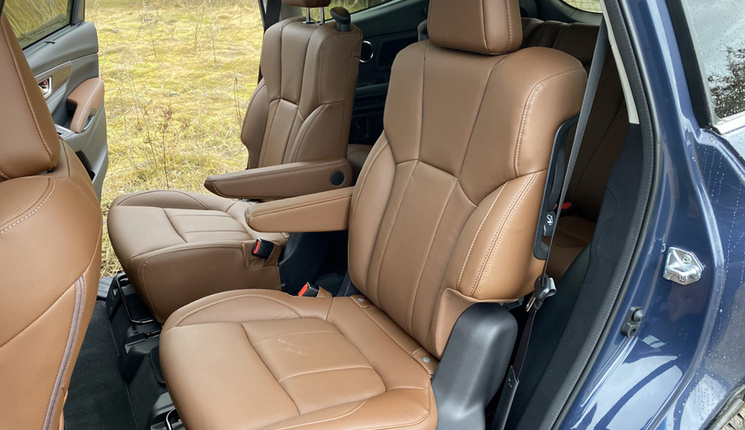 In some upper trim levels, additions include new illuminated ring gauges and a new Cabin Connect system that uses the cabin microphone and audio speakers to broadcast the driver’s voice more clearly to rear passengers. But don’t worry, the rear rows don’t get microphones, so you won’t have to hear amplified whining about “Are we there yet?” 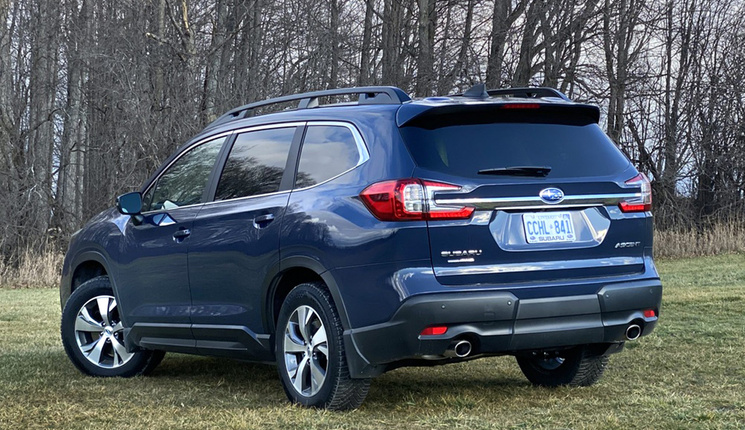 The 2023 model prices listed above are up $2,000-$3,700 over last year’s costs, depending on trim level, with the base Convenience model making the biggest price jump. On the plus side, Subaru has dropped the extra charge for the Captain’s chairs option in Touring and Limited models, allowing customers to make a no cost choice of either seven- or eight-passenger seating.
Subaru Canada introduced the 2023 Ascent to Canadian automotive journalists at a December launch in Prince Edward County, bringing a mixed fleet of Touring eight-passenger models and Premier seven-passenger versions, all dipped in this year’s latest shade of Cosmic Blue Pearl.

It doesn’t take long to assure yourself that, yes, a four-cylinder engine in a biggish sport ute can manage just fine, thank you. The 2.4-litre FA24 turbocharged boxer four makes 260 hp and 277 lb-ft of torque and claws up to speed handily, with only a bit of four-banger moan and the accompanying hum of Continental VikingContact winter tires in the background. The Ascent Convenience will tow 908 kg (2,000 lb) while upper trim levels with cooling upgrades allow for a 2,270 kg (5,000 lb) tow rating. Ascent fuel economy is rated at 12.3L/9.4L/100km and, with a mixed bag of drivers sharing my test vehicle, most of my averages on the trip computers were within or below those limits. 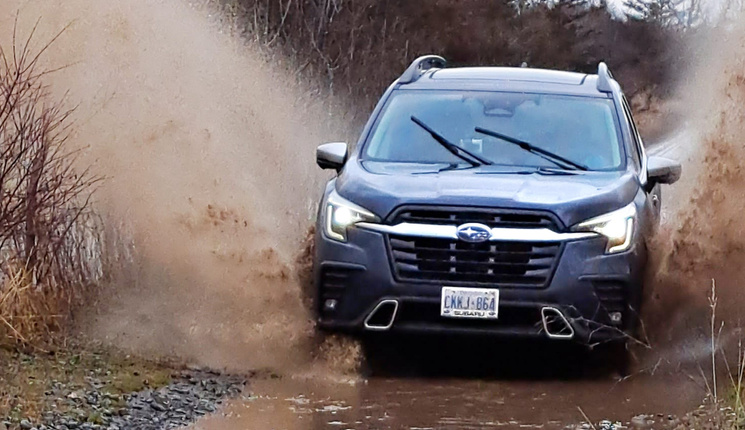 The 2023 Subaru Ascent felt sure-footed and controlled on a mix of asphalt and gravel roads reflecting the everyday demands of most customers. The independent suspension smoothed out the worst of washboarded gravel roads, the Lineartronic transmission was delightfully more ignorable than most whiny CVTs and the combination of Subaru’s vaunted symmetrical AWD and the Ascent’s lofty 220 mm of ground clearance capably tackled mud wallows, lumps, bumps and rough country lanes with aplomb. Onyx, Limited and Premier trims include an upgraded dual-function X-MODE with Hill Descent Control and SNOW/DIRT and DEEP SNOW/MUD settings for extreme weather or road challenges.

I climbed in and out of all three rows to find all seating positions doable (with a little compromise racking from fellow passengers) and with plenty of headroom and elbowroom throughout the cabin. While the Premium trim model with second-row Captain’s chairs lived up to its name, fully loaded and with Nappa leather upholstery for the first time, the Touring model with a second row 60/40 bench and was perfectly acceptable. 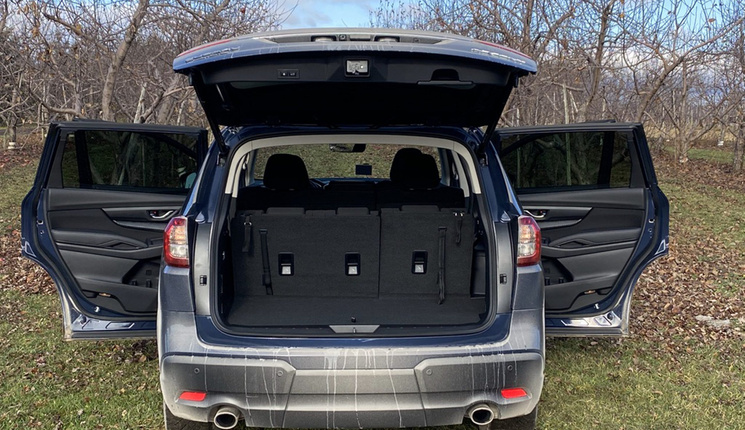 There’s no news about any levels of future hybridization but with the recent launch of the all-electric
2023 Subaru Solterra, there are bound to be powertrain innovations coming throughout Subaru’s lineups.

But, for now, the refreshed 2023 Ascent remains the large-scale solution for the Subaru faithful fitting out for growing family transportation needs. While maybe even luring new crossover customers to the brand.