Faster charging and more range, still every bit a Porsche.

Join the Conversation (0)
How do you know the 2023 Porsche Taycan is a real Porsche? Because like the 911, there are nearly a dozen variants of the electric performance sedan. Each wanting to be perfect for the right niche of buyer. From fast to obscene, with a sedan or two different station wagons. They're all lined up at the Porsche Experience Center Franciacorta just waiting for us to learn their intricacies.

After four years on the market, Porsche has already moved more than 100,000 copies of the EV, despite the pandemic-related production issues that have hammered high-tech vehicles especially hard. Time for a few changes to make the car more efficient, faster, and even more high-tech. Porsche is showing off the promise of over-the-air updates, as well, and more than half of buyers of prior-year cars have already gotten some of them through a day-long software update done at dealers.

In Normal and Range drive modes, Taycan can now de-energize the front motor completely when it's not needed, disconnecting it from the system and reducing energy consumption. There's no drive torque applied to either motor when you're coasting, saving a few more precious electrons with every metre you travel. Canadian figures aren't out yet, but US numbers show improvements as much as 14.2 percent depending on model. The highest range on the EPA test is now 400 km.

When you're charging, the car can do that more quickly, too. Peak speeds stay the same, but the time and temperature windows where it can come closer to peak are wider.

Tech updates in the driver assist systems aren't groundbreaking, but they are helpful. Parking sensors now have more range and can give the OK to smaller spaces so you can make stopping driving a bit less painful. Remote ParkAssist has some more range, too, letting you put the car in more spaces using your phone. Porsche has more OTA updates coming, and Functions on Demand letting you add features like keyless opening down the road. No, were' not sure why you wouldn't get that feature from new, but when you make cars as customizable as Porsche does, strange things happen. 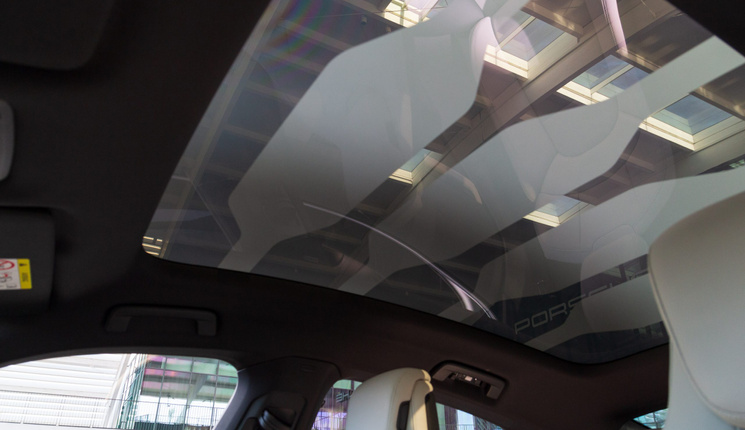 PCM, what Porsche calls its infotainment system, is new and one of the updates that can be sent to older models. Android Auto and Spotify join the list of features, and the interface has been redone with more colourful tiles.

Last up is a new electrochromatic roof that dims or goes clear with the touch of a button. It's neat.

But I'm not in Brescia, Italy, home to the start and finish of the Mille Miglia sports car race to talk about tech updates. Aside from a preview of Porsche's new electric Macan, that is. I'm here to drive.

Canadians are taking a pretty even split of their Taycan body styles. A little under half are the sedan, the rest are either the Sport Turismo performance wagon or the slightly lifted quasi-rugged Cross Turismo wagon.

There's only time to drive two versions, so I take the two opposite ends of the spectrum. A 429 hp 4S sedan and the all-conquering 750 hp Turbo S Cross Turismo. 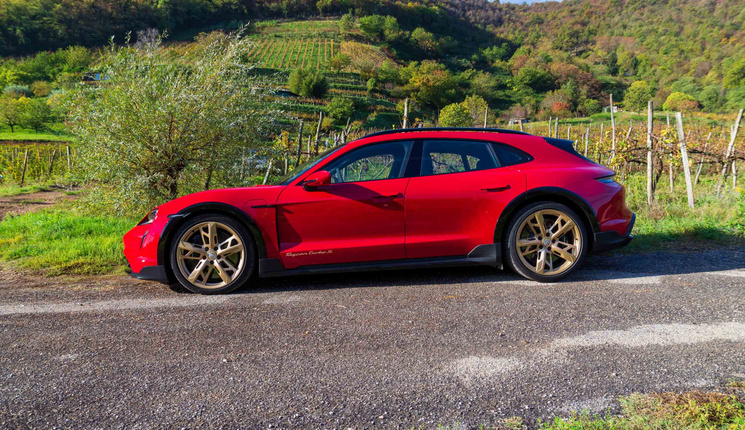 Porsche has lined up Taycans by trim, and there's a very special one catching my eye. A 2023 Porsche Taycan Cross Turismo in the launch spec of red with gold (Porsche calls it "Satin Autumn") alloys. The idea of a 616 hp sports EV (750 in launch control mode) meant for gravel roads is a strange one, but I love the cladding. I also love the idea of a Porsche that can handle the lunar surface that is Canadian highways as well as a track day should you feel the need.

Promise made and delivered. Floor the right pedal and the Taycan explodes in the kind of fury that only electric performance cars can offer. Short of a carrier-mounted catapult or a magnet-powered rollercoaster, nothing can deliver this level of immediate power.

No waiting for a downshift, no waiting for boost pressure to build. An EV doesn't even need the time it takes for an injector to start squeezing out more fuel. 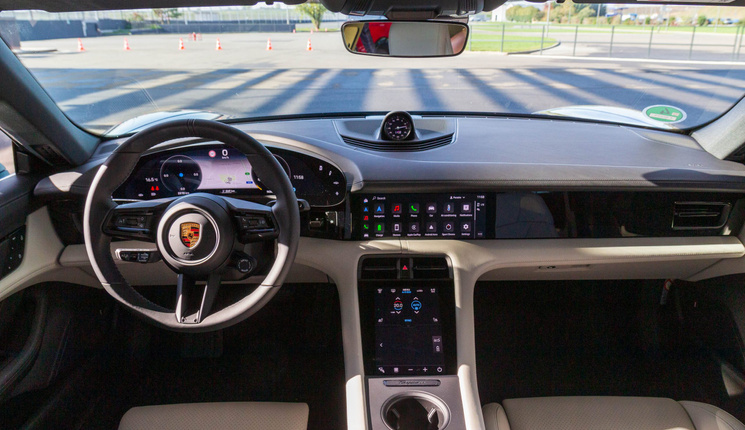 You can turn off the traction and stability control systems in the Taycan, but I'd counsel against it. Especially on a public road. We're on the shady side of the mountain and the sun has yet to warm the pavement or dry the heavy morning dew. Unleash max power and all four tires break their hold on the pavement, even though the car is already moving at 50 km/h.

With electric power, traction control systems have been revolutionized. It doesn't cut spark, fuel, or throttle like in a gas car, cutting power to all four wheels. Instead, it can reduce the power to only the front or rear axle with incredible resolution.

The best summary of the effectiveness of the system came not when I was launching this missile out of a bend, but when I was passed by another Turbo S. The driver of that car was a bit more impatient to get around both me and the two construction trucks in front of me. On a minuscule straight stretch of road, he attacked, firing the Turbo S around all three of us in what looked like seconds. One moment he was in my mirror, the next moment braking for the next curve. 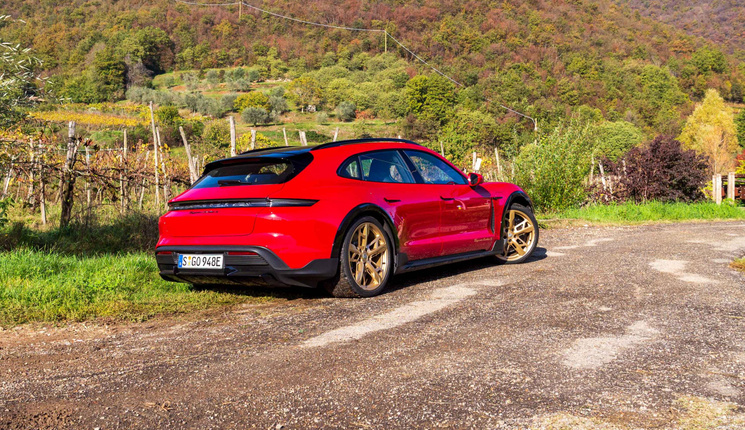 But the sound of the car was astonishing. It wasn't the roar of internal combustion, but the sound of electric motors, inverters, and fans at full tilt has a strong appeal on its own. What was fascinating was that I could hear all four tires changing speeds and sounds as they scrabbled for grip. Nearly imperceptible spurts of slip came and went from each tire as the car flew past my open window.

Though the Cross Turismo has plenty of cladding, it's not that much different from the Sport Turismo which uses the same body. The ride height difference is small. Just 20 mm, enough to keep the nose from scraping on switchbacks so tight they fired off parking sensor warnings and heavy scraping noises in the 4S.

It is still every bit a Porsche Turbo car, even if there's no turbo. With incredibly direct steering, unflappable damping, and a view from between the bulging fenders that makes easy work of threading this quarter-million-dollar car down roads designed hundreds of years ago for livestock-drawn carts.

Come to a stop, turn the steering wheel dial to Sport Plus, and hold the throttle and brake and the car kicks into launch control mode. Where it fires you into the horizon at a rate that is disappointing because the many Italian speed cameras and good sense say too quickly it is time to stop. 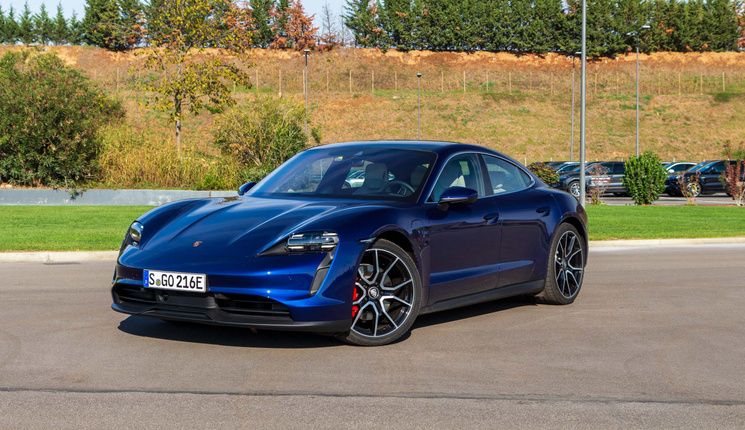 Against that, is the mere 429 hp output (522 on launch control) of the 2023 Porsche Taycan 4S sedan a disappointment? Absolutely not. While the Turbo S is a rabid wolverine of horsepower and traction, the 4S is merely damn quick. Acceleration that is impressive, not nauseating. This one is equipped with more comfort-biased seats, not the race-like chairs in the Turbo S (it's Porsche, so you can get almost whatever you want in whatever car you want), and for my large frame they're a bit nicer. Especially when getting in and out.

The 4S has the same inherent goodness that drives the Turbo S; sharp steering, an astonishing balance of ride and handling thanks to the available air suspension. And you do want to pick that option. Does it feel sharper than the off-road Cross Turismo? Not to my well-calibrated backside, though a difference would probably show up on the racetrack. The Taycan still goes without anything like a one-pedal mode, but the tradeoff is brake feel that is well ahead of most gas cars and at the top of the EV pile. 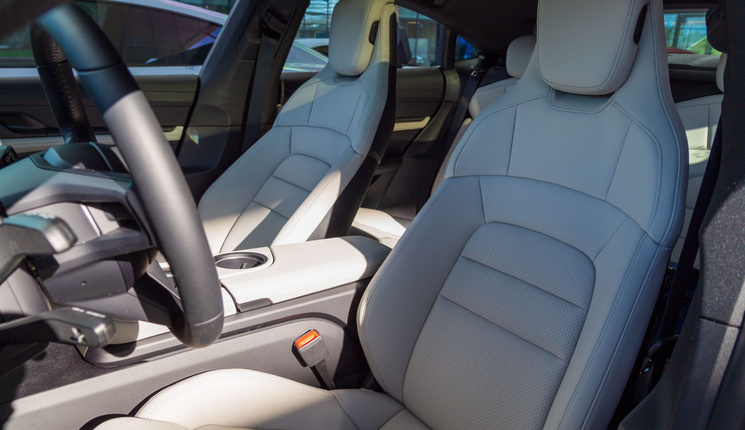 Of the two, the 4S is the car I'd rather have in my driveway. Plenty fast, but more accessible. I love retina-distorting acceleration as much as anyone who loves cars, but having all that power just waiting can be, well, tiring.

The biggest surprise of the two, though, was the efficiency. I did the same circuit in both vehicles, a loop of around two hours that had 130 km/h highway, steep climbs, and barely any coasting. Both cars used an indicated two-thirds of the actual distance I drove. Credit that new disconnecting front motor and the ability of the 2023 Porsche Taycan to capture up to 265 kW through regenerative braking.

Porsche has proven that the Taycan is a legitimate performance sedan, despite being electric. For 2023, it has made the experience a bit better with some useful updates to the UI and other systems. Better yet, the company promises to keep evolving the Taycan, maycan good even better.

CARGO VOLUME: 366 litres, 81 litres in front trunk for sedan, 520 behind second row and 1,390 with seats folded for Turismo models