Base Macan gets a handling-focused boost.

Join the Conversation (0)
I’m gonna go out on a limb here and assume you’ve all heard the song Dream On. You know the one? Even if you’re not a classic rock fan, you’ve surely heard the 70s power ballad that pops up roughly three times per day on any classic rock radio station and has over 600 million plays on Spotify. If classic rock’s not your cuppa, know the tune was the sampled beat for Eminem’s 2002 hit Sing for the Moment and Immortal Technique’s 2011 track Angels and Demons. The song has been included in the Rock n’ Roll Hall of Fame’s 500 Songs that Shaped Rock and Roll, and Rolling Stone slots it in at number 199 of the Greatest Songs of All Time.

Here’s the thing though. Think back to when you first heard it. Did you know it was an Aerosmith tune? Did you recognize the vocals as belonging to then 25-year old Steven Tyler?

I ask because I certainly didn’t. And I know I’m not alone in that.

Just the other night my wife and I were slowly making our way towards dinner at a restaurant in Toronto traffic when the song came on. Immediately we started chatting about how it took both of us time and (pre-internet) consultation to learn that Dream On was indeed an Aerosmith track. You see, we both grew up in a time where Aerosmith had already evolved and Tyler’s voice had become a little raspier. Tracks like Walk This Way, Sweet Emotion and Love in an Elevator had already wormed their way into our brains to define the band’s signature sound. And Dream On? Well, it just doesn’t have that same sonic stamp. Even after learning they did it, it doesn’t feel like an Aerosmith song. 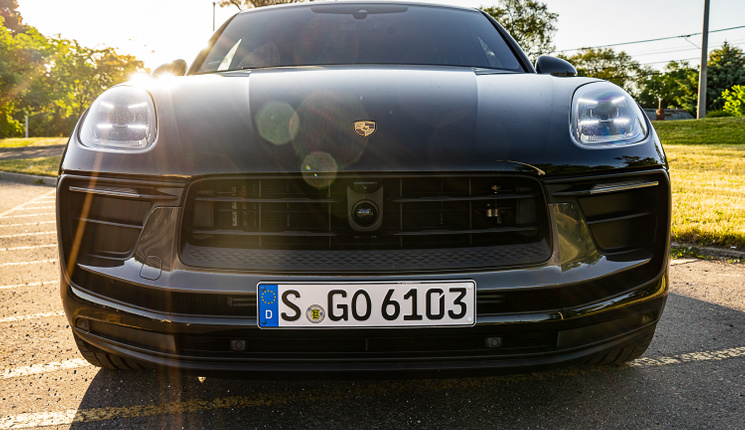 Which brings us to the 2023 Porsche Macan T – the first Porsche that I’ve ever driven that didn’t feel like a Porsche at all.

New to the model line, the Macan T slots between the base model Macan and the more powerful, Macan S. Powered by the same 4-cylinder engine in the Macan, the T adds a package of amenities and features focused on improved handling but forgoes any added engine tuning.

Cosmetically, the T looks very much the same as its stablemates. There is some Agate Grey Metallic trim where black bits usually reside but the only real tattletale to T status (aside from badging) is that the SportDesign mirrors aren’t colour-matched to the body – those are Agate Grey, too. The real changes are beneath the surface.

First and foremost, the T gets a special version of the Porsche Active Suspension Management (PASM) system that lets this Macan hunker down some 15mm lower than its base model sibling. Porsche’s Sport Chrono package is also bundled as standard equipment so you will eclipse 100km/h a full two-tenths quicker (6.2 seconds), and there are stiffer sway bars, too. Combine that with a set of 20” wheels from the Macan S, and you have the makings of a CUV with corner-carving on its mind. 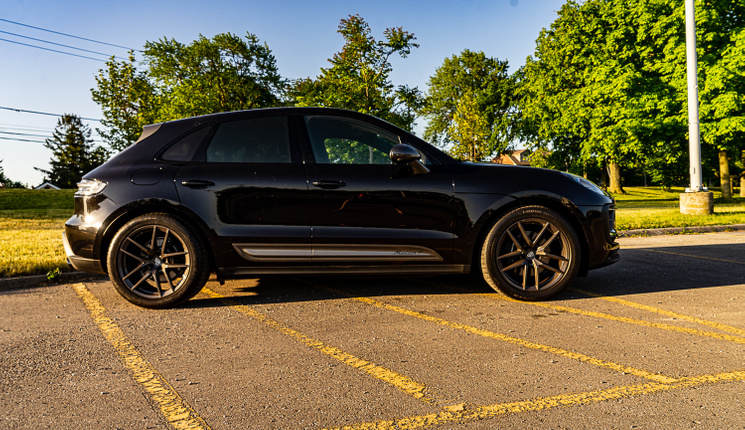 My Jet Black Metallic Macan T had also been further hotted up with Porsche Torque Vectoring + ($1,700) which is an electronically controlled, fully variable differential lock that uses the brakes at the rear axle to control torque output to enable even more precision when it comes to kinked asphalt.

With all of this at the front of mind, I eagerly slid into the sculpted, pin-striped, Sport-Tex seats of the Macan T and set off with high hopes.

From the cabin, there is no mistaking the maker at all. Materials and fitment are typical Porsche and by that I mean top-notch. The dash is a three-gauge analog set-up featuring the tachometer front and centre as it should be. Both the steering wheel ($1,450) and headliner ($1,760) are coated in Porsche’s Race-Tex, which is soft and grippy. Where a plethora of buttons used to reside on the centre stack in Macans of yore there is now a gleaming, piano-black panel, ready to collect fingerprints by the dozens as you tap at various settings. 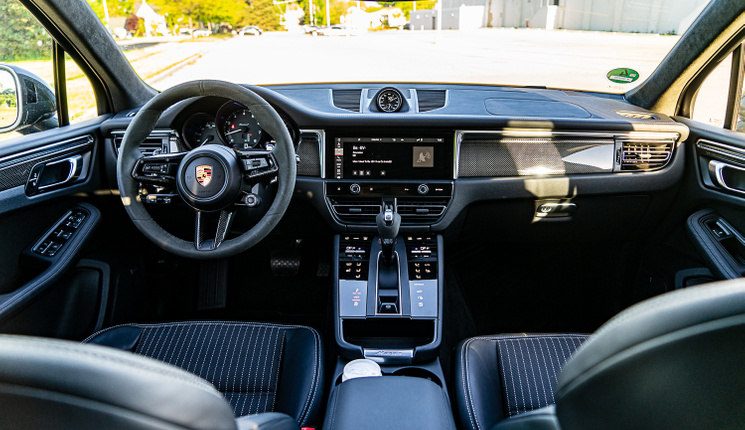 The stereo is a 10-speaker, Bose affair. It's nowhere near as good as the Burmester systems found in higher-end Porsches but it has acceptable sound quality that is aided by just how quiet the Macan T is in motion.

The VW sourced 2.0-litre engine delivers a healthy 261 horsepower and 295 pound-feet of torque, but it doesn’t really provide any auditory drama. In fact, it’s almost barely perceptible even with a right foot firmly planted. Speaking of…

Planted is the most apt description I can give for the Macan T – like it has some form of a mobile, subterranean root structure clinging to its underbody, fighting centrifugal forces and holding it fast to the ground. A Macan S I drove a few years back really impressed me with its handling characteristics, but in the Macan T there is less drama and more poise. The steering is linear and direct. The combination of suspension tweaks, torque-vectoring and Porsche’s rear-wheel biassed all-wheel-drive system work together to make a nearly-1,900kg vehicle hold a line and change direction better than it has any right to.

Which all sounds incredible, except that its utter competence made the experience of what would typically be an enjoyable and engaging spirited drive feel robotic. And that’s not a very Porsche thing at all. 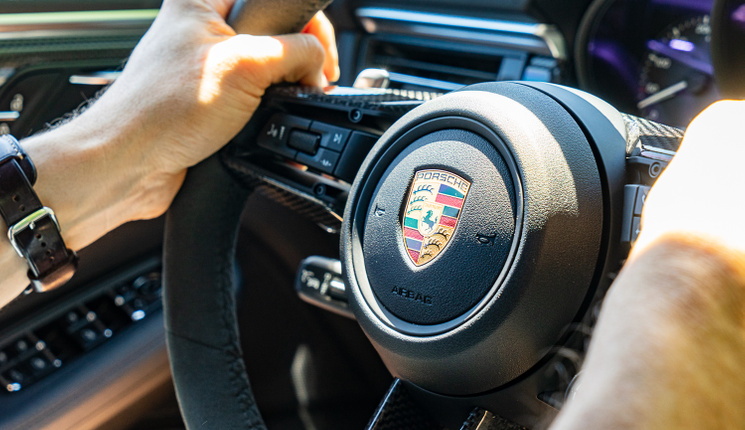 Porsche is renowned for their over-engineering, but even in their lesser versions of performance models the tuning and set-up always feels just right. Whether you drive a base model 718 or a fully-kitted 911 Turbo S, you’re rewarded with the similar engagement and involvement. The chassis and suspension are tuned to suit the power on offer, to provide feedback and, ultimately, thrill occupants – that 718 may not accelerate or corner with the same quickness of the 911 but the physics at play deliver similar sensations. And that just isn’t the case here. You can tell with nearly every manoeuvre that the Macan T could handle and even wants more power – almost like it's operating in standby mode (albeit a very fast paced version). It just shrugs direction changes off as if they were effortless. And while that feat is entirely commendable it's not the driver’s reward I want or expect from something with a Porsche badge.

Much like hearing that tune Dream On, there’s something about the experience that isn’t in keeping with what you know of the folks behind it.

Of course, just because you don’t know who’s singing or playing the instruments, doesn’t mean Dream On isn’t a banger of a song. And make no mistake, the Porsche Macan T is banger too; it just didn’t deliver the experience I associate most with the brand.