Join the Conversation (1)
Still in its first generation, not yet a decade into production, the Porsche Macan is the brand’s sales metronome, chopping wood year in and year out for the famed Stuttgart carmaker, leading the way in company sales worldwide.

We are now long past the time when the notion of a sports car company building SUVs would be considered heresy. The purists are still out there, but they’re not heard from as much anymore, as most consider the release of the compact Macan and its larger Cayenne sibling a decade earlier to be enormous successes for Porsche.

A quick glance at the company’s sales report tells the story. The Macan sold more than 88,000 units worldwide in 2021, firmly entrenching it as the company’s bestseller, and it was also the number one Porsche in Canada, where 3,657 were sold, an increase of 32 percent over 2020.

In short, since its debut in 2014, the Macan has become, at least from a business perspective, the most important car Porsche builds. Yes, the 911 is, and always be, the beating heart of the brand, but the Macan pays the bills. 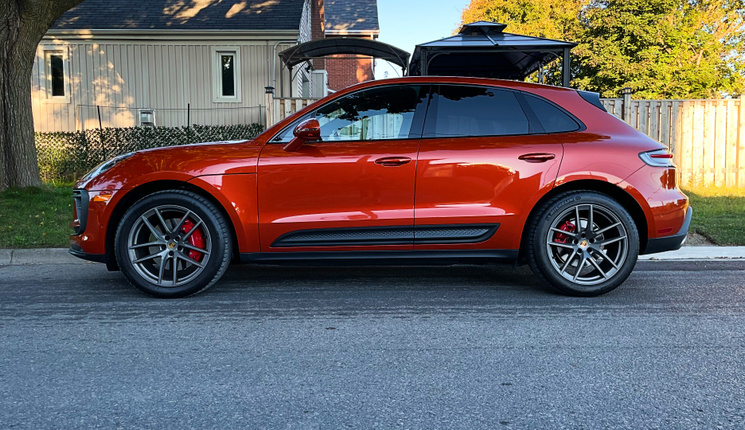 At any rate, the focus here is the Porsche Macan S, the second-highest grade in the lineup, which is now oriented thusly: Macan, Macan T, Macan S, and Macan GTS. The Macan T is new for 2022, while the GTS replaces the Turbo at the top of the range. These changes coincide with a facelift that introduces several changes, both cosmetic and mechanical.

Among the exterior changes are redesigned front and rear bumpers, a new front splitter, a redesigned rear diffuser, and new wheel designs. On the inside, the Macan receives a redesigned centre console, which make use of capacitive touch surfaces instead of physical buttons. Other changes include a smaller gear shift lever, and new leather seating and contrast stitching options. 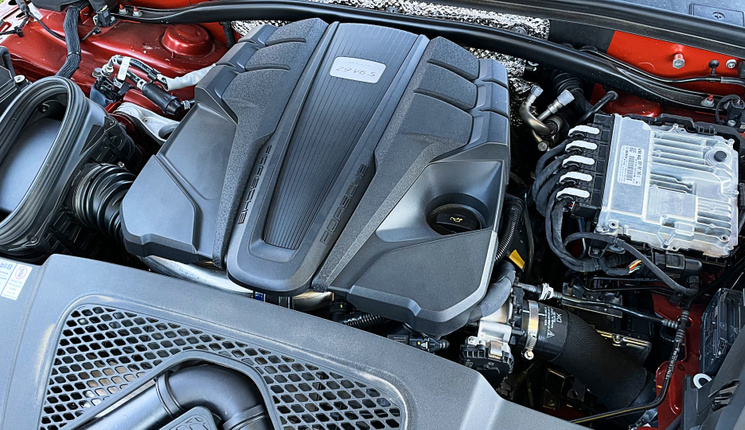 The 3.0-litre turbocharged V6 (349 hp / 354 lb-ft.) that previously powered the Porsche Macan S has been replaced with a 2.9-litre twin-turbocharged V6 that produces 375 horsepower and 383 lb-ft. of torque and is paired with a seven-speed PDK automatic transmission and Porsche Traction Management all-wheel drive. Of note, the 2.9 is also found in the GTS, albeit with more power (434 hp / 406 lb-ft.).

Porsche has also fine-tuned the Macan’s chassis for improved sensitivity and response to changing road conditions which assists the driver via better steering feedback. The Porsche Active Suspension Management System (PASM), which continuously adjusts damping force at each corner, is standard equipment on S and GTS models.

For this review, Porsche Cars Canada set me up with a Macan S tester finished in Papaya Metallic with a black leather interior. As is the case with almost every press vehicle, this Macan S carries optional equipment. Among the extras are Adaptive Air Suspension ($1,590), Sport Chrono Package ($1,390), Adaptive Cruise Control ($1,130), 20-inch Macan S wheels finished in Vesuvius Grey. 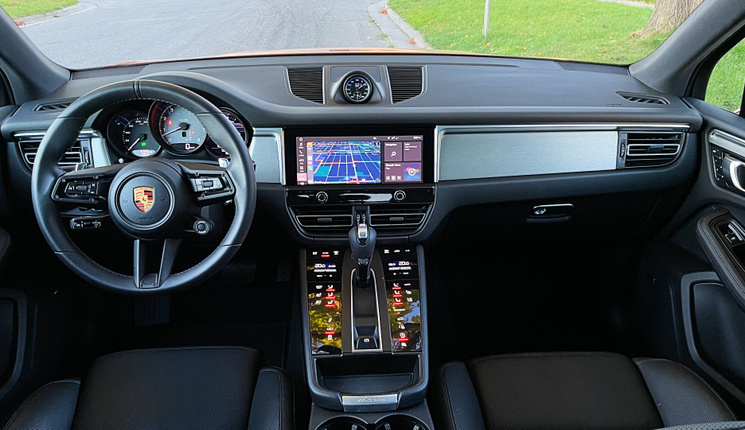 From an appearance perspective, the Macan is clearly an SUV, albeit with a two-box design that looks slipperier than most. Its rearward sloping roofline, flared haunches and big 20-inch wheels give it a much sportier look than other offerings in its class, even those that carry performance badges.

But what’s really striking about the Macan’s appearance is it looks like a Porsche. Even if every one of its identifying marks were removed, it’s still unmistakably Porsche. Credit the design team for crafting an SUV so faithful to the company’s essence.

On the inside, Porsche design details have been carefully implemented into the Macan’s interior to immediately remind occupants that this is the same manufacturer that builds 911s. From a dashtop mounted analogue clock, and twist ignition on the left side of the steering wheel, to its large console with its many touch panel switches, Porsche DNA oozes out from every corner.

The Macan’s interior is quite comfortable and well-appointed, but in an all-business sort of way. This cabin, with its motorcycle pod-styled analogue instrument cluster and rather spartan dashboard, isn’t designed to dazzle but rather to help one extract everything out of the Macan’s considerable performance pedigree. 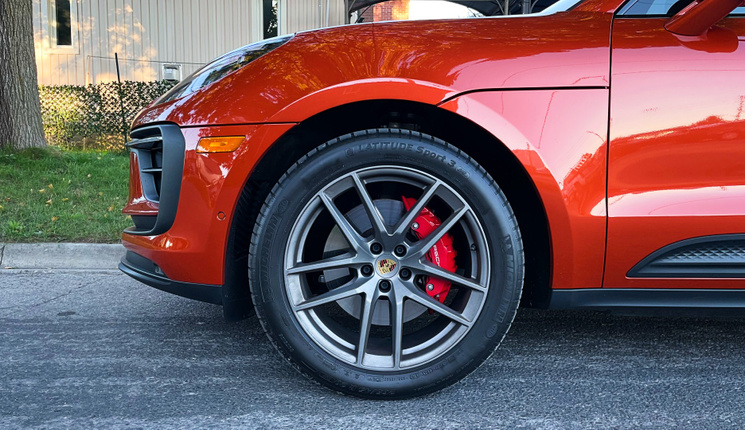 And speaking of the drive, piloting the Macan S is simply a delight. I was confined to public roads during my test, but during my five days of mixed highway and local driving, my tester produced a lot of smiles.

Yes, dialling the optional sport chrono knob on the steering wheel to sport+ is quite satisfying, in its rev bumping, revised throttle mapping, damper-tensing ways, but what’s so fun about doing so is hearing the exhaust note change. Hearing the quad tips emit a light rumble, and then a more full-throated snarl, both at idle and under PDK-snapping acceleration, is a sublime experience.

Rarely do I wish for time on a closed course when I’m driving an SUV, but the Macan S is an exception to that notion. Its PASM-sharpened handling, quick steering reflexes and snappy throttle response work splendidly on two-lane country roads, but a winding road course where its 2.9-litre turbo V6 could really stretch its legs is where the Macan S would feel truly at home. Maybe next time. 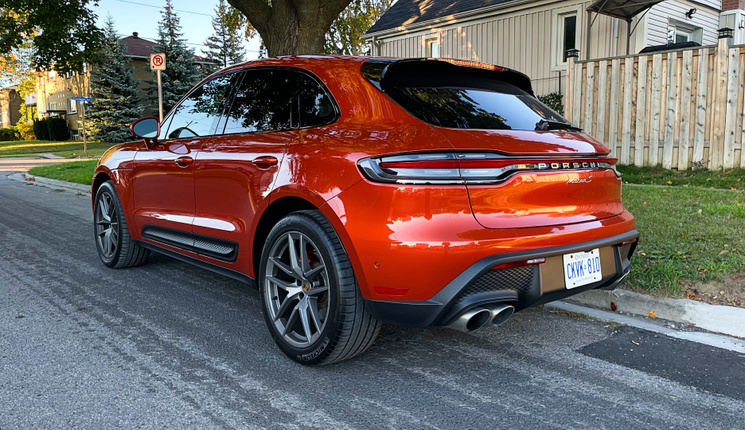 In sum, there’s a lot to like here. Apart from its impressive performance, the Macan S does SUV things well too, thanks to its all-wheel drive, roomy interior and cargo area, and 4,000+ pound tow rating. The only negatives for me are its somewhat limited rearward visibility due to a smaller greenhouse and an interior that lacks a bit of pizzazz.

But these are minor nits. The Macan S is a fine performance SUV that is every much a Porsche as its two-door brethren, and whose presence should guarantee the latter’s existence for years to come.