Ac iconic nameplate is back and it's better than ever.

Join the Conversation (0)
At long last, a new Z is here. A new entry in Nissan’s long-running sports coupe wasn’t a slam dunk, given how niche sports cars have become, but the company refused to let the nameplate die and for that fact alone, we should rejoice.

After debuting as a prototype in September 2020 and as a production model last summer, the press was finally able to get seat time in U.S.-spec, pre-production, seventh generation 2023 Zs in Las Vegas, on road and track, in early May. There is a lot of ground to cover here, so let’s dive in.

Because the basic architecture of the 2023 Z, Nissan front midship, carries over from the prior 370Z, its footprint is almost identical to that of the old car. In fact, the only significant external difference is length, where the Z is 124.4 mm (4.9 inches) longer than the 370Z. 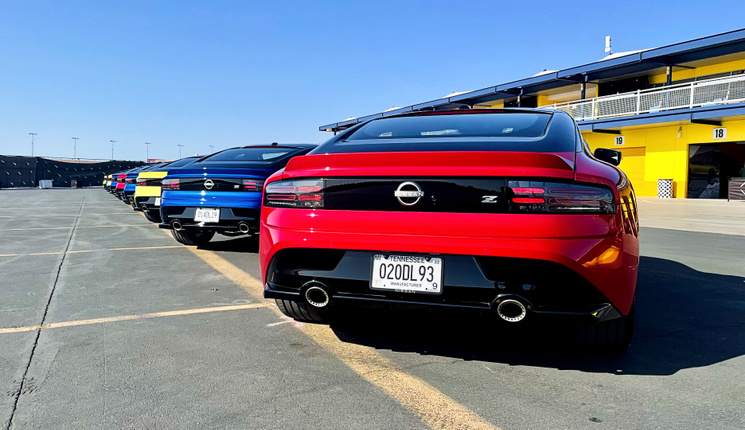 Lest anyone think the new Z is merely an old car with a new body shell, that notion is easily dismissed by the many changes that exist under the skin. 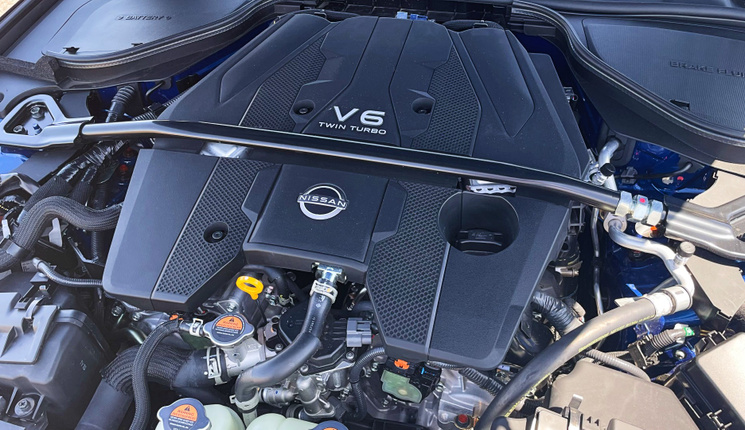 Two items to take note of with the 3.0L is the presence of a new recirculation valve, which controls engine airflow for quicker throttle response, and a turbocharger with a turbo speed sensor that allows the turbo to rotate at maximum speed for greater power output.

Paired with the twin-turbo V6 are two transmissions, a standard six-speed manual that utilizes an Exedy performance clutch, and an optional nine-speed automatic that replaces the seven-speed autobox used in the 370Z. Launch control, available for the first time on the Z, is standard with the automatic and available with the six-speed. 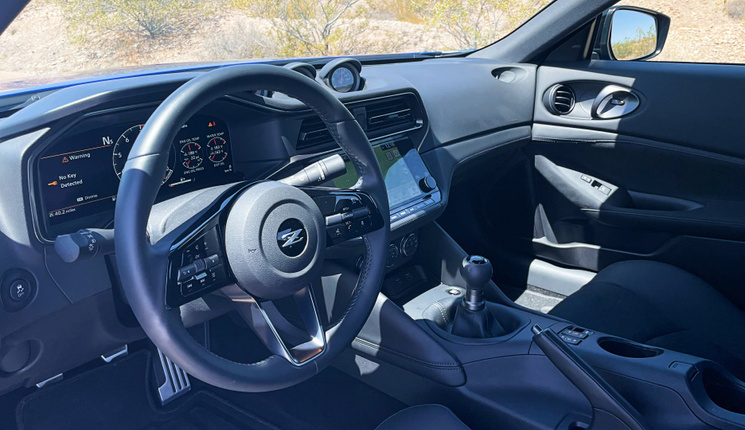 The six-speed also incorporates what Nissan calls “power on shift,” which allows for acceleration without lifting off the throttle while changing gears. With both transmissions, the aim is for an “optimal” amount of wheelspin before launch, which is about as scientific in practice as you might imagine.

But to keep owners from shredding the rears, a rear mechanical limited slip differential (LSD) is available. The 370Z had a viscous LSD, but Nissan says the new unit, which locks to send equal torque to both rear wheels, reduces wheelspin for better launches. 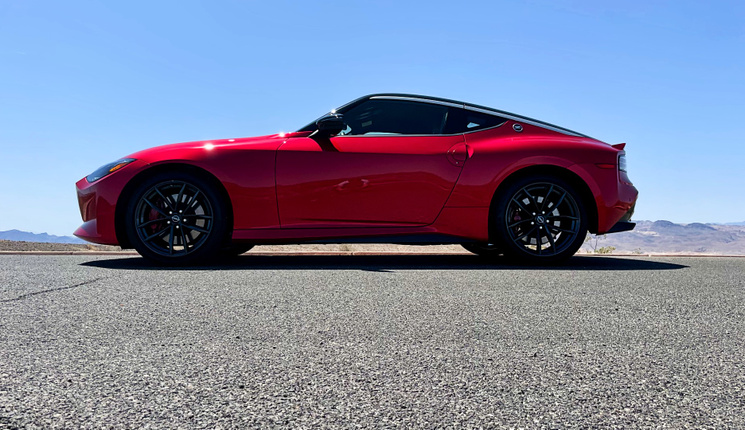 On the design front, the 2023 Z is a mix of new and retro themes that pays homage to the Z-car’s 53-year history and feels modern at the same time. In terms of retro, the biggest nods to the past are in the car’s lighting, which features ovoid-shaped LED headlight lenses with eyelash daytime running lights that are a nod to the original 240Z. Meanwhile, at the rear, the rectangular, stacked taillights and turn signal indicators are reminiscent of the 300ZX.

Apart from these details, the new Z’s overall aesthetic has more in common, at least to these eyes, with the 370Z than not. The Z’s lines are crisper, and the front end is heavy on 240Z styling, but taken together, the changes are more evolution than revolution.

The one area where the Z makes a giant leap forward, however, is in the cabin, which receives a thorough makeover. One aspect of 370Z, a car that debuted in 2008, that had really aged out was its interior, whose pre-smartphone aesthetic looked positively ancient by the time the car was finally retired in 2020. 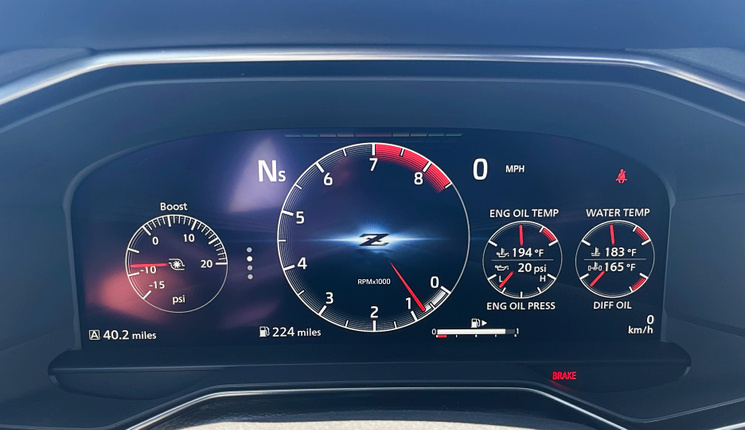 All 2023 Zs come standard with two digital display screens, a 12.3-inch TFT metre instrument cluster unit, and an eight-inch multimedia display. Of note, the U.S.-spec models I drove in Vegas are equipped with a nine-inch unit with embedded navigation, but Canada is getting an eight-incher with no nav. Wired Apple CarPlay and Android Auto are standard, however.

The dashtop analogue pod cluster, a Z design staple, that tracks boost, turbo speed, and voltage is back, positioned within the driver’s sightline.

During the press event, several waves of journalists shook down pre-production versions of the car on road and on track at the 2.3-kilometre (1.4-mile), 11-turn road circuit at Las Vegas Motor Speedway.

On the twisty, but flat, road course, the Z feels quick. During lead-follow exercises, where I switched between manual and automatic transmission test cars, the twin-turbo V6 not only launched the Z with impressive haste but also roared with great delight. It was a mostly third-gear exercise with the manual, and I am impressed by how precise the clutch-shifter-steering relationship feels. I didn’t shift often, but enough to appreciate the notchy reliability of the Exedy clutch. 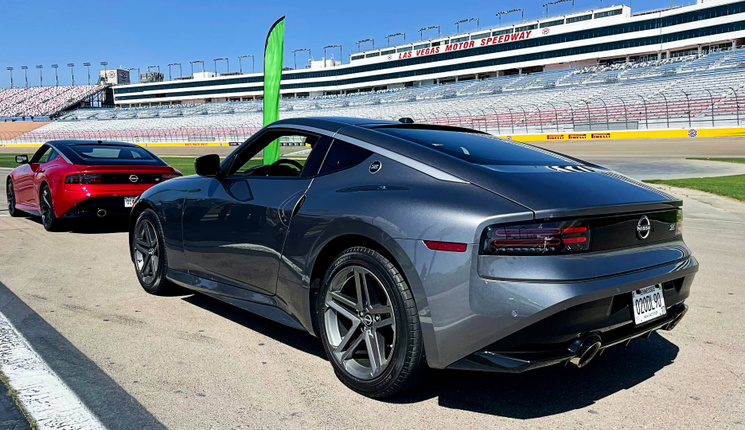 The Z is easy fast, but it also feels glued to the tarmac. The rear end feels mostly settled, there’s little understeer, predictable rotation through cornering, and gathering it back up if one comes in a little hot (as I did once or twice) is easy. Steering feel was good overall and enabled for easy input adjustment when setting up for corners of various size and layout.

To be clear, I wasn’t on the ragged edge, but I pushed the cars hard, and felt that they were both quite quick (especially the automatic) and fun to drive on track. A few of my colleagues felt the car’s suspension tuning wasn’t firm enough, and while I can’t say the Z is the stiffest car I’ve driven on track, it feels firm enough for lapping based on my experience. For those who are serious about tracking this car, the aftermarket will surely meet those needs in time, and NISMO bolt-ons from Nissan are likely to become available.

I also spent about two hours winding through the Nevada desert on a drive route to and from Lake Meade, where I swapped an automatic tester for one with a manual. If the stock suspension may not be the firmest on track, it’s perfectly suited for the road. 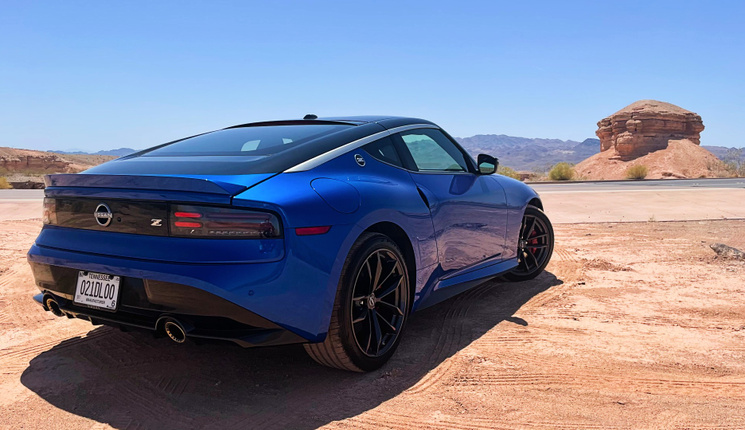 A raspy exhaust note combined with impressive acceleration, both from rest and at speed, and sharp handling reflexes, makes the Z a thoroughly fun car to cruise around in. The interior confines remain tight, and there’s precious little space for cargo, but the new seats, steering wheel and tech overhaul finally gives the Z a cabin worthy of its driving dynamics.

Bottom line, there’s a lot to like here. Not everything is new, but there’s enough that is – from striking looks that toe the line between retro and modern, to a more powerful engine, remade interior and loads of standard safety kit – to make sports car intenders sit up and take notice. The Z is less powerful than a Chevy Corvette but it’s also $20K less and has power output comparable to a six-cylinder Toyota Supra, but with a lower base MSRP.

All of this bodes well for the future of the Z, an iconic nameplate that is now as modern as any sports car on the market.

The 2023 Nissan Z goes on sale across Canada this summer.