Join the Conversation (0)
Nashville, TN – Originally shown in near-production “concept” form in October 2019, the 2023 Nissan Ariya all-electric SUV took a while to arrive to market, with compact crossover EV rivals like the Hyundai Ioniq 5 and Kia EV6 debuting and landing in dealers all over the world before the Ariya’s planned arrival in North America this year.

And the delays have continued. The company says now that front-wheel drive models will not arrive by fall but at the end of the year, with the expected AWD volume model now slated to arrive in early 2023.

Furthermore, online reservations for the Ariya are currently closed and Nissan Canada officials at the media launch drive said there’s no ETA on when they may open again. Roughly 60 per cent of Nissan dealers in Canada will sell the Ariya at launch, they said, so before visiting your local Nissan dealer for more information or a test drive, you may wish to check online for availability. 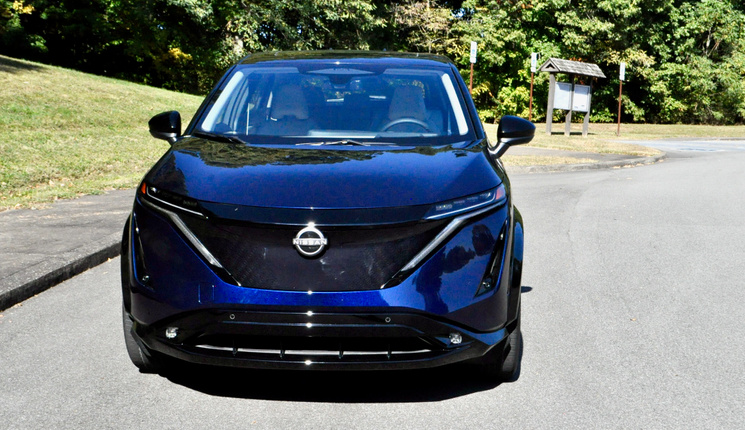 But now that the Ariya is finally here, or at least very close, it brings a stylishly welcome addition to the EV crossover party, and hopefully some relief to the many EV buyers on long waiting lists to receive their reserved electric SUV. The Ariya features a spacious interior and a luxurious driving feel, but doesn’t wow with either charging speeds (on paper, as we didn’t have time to charge it) or acceleration, providing energetic though not dramatic low-end thrust.

Mind you, we drove only one version of the Ariya, out of a total of six available at or near its early ’23 launch. The base Engage trim starts at $52,998 and offers front-wheel drive and a standard 63 kWh (usable, 66 kWh total) lithium-ion battery, with an official estimated range of 348 km.

There will also be an all-wheel drive Evolve e-4orce ($60,598) trim level that also uses this smaller battery, but is much more powerful and adds features such as a pano moonroof, power liftgate, and wireless device charging, among others. This Evolve AWD trim offers a touch less range due to increased weight of the extra motor and overall features, at roughly 330 km, though the final range figure for the all-wheel drive models has yet to be finalized, said Nissan.

Like the all-wheel drive though, most Ariya buyers will likely want the larger capacity 87 kWh battery (91 kWh gross), designated in most trim levels with the ‘+’ sign. The Venture+ comes with cloth seats but is the least expensive long-range model at $59,498, and also offers the longest range, at 490 km in total. That’s followed by the Evolve+ ($64,998), the Platinum e-4orce at $68,198, and the range-topping Premiere ($69,998) launch model. 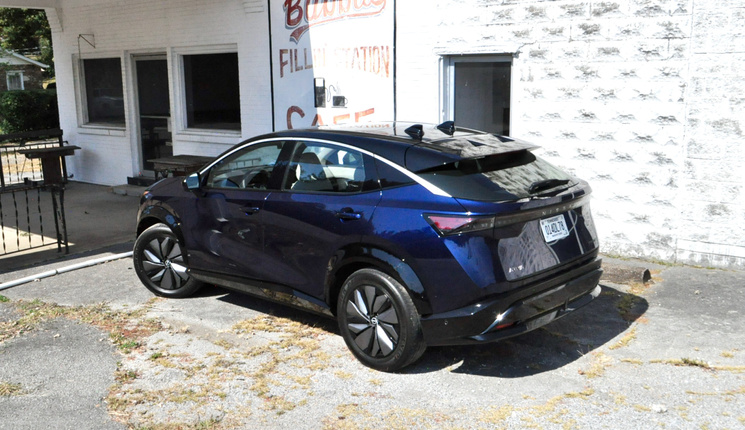 The U.S. also receives an Empower trim level just under the Platinum, which is what we test drove for a day around Nashville, but it will not available in Canada. Officials say our tester was largely spec’d out to our $67k-ish Evolve+ model, after its $2,095 freight charge, although features we sampled such as the automatic parking system and digital rear-view mirror are reserved for the Platinum north of the border.

Another notable difference in Canadian Ariyas is that Nissan’s ProPILOT Assist adaptive cruise and driving program is still the 1.0 version introduced previously that doesn’t allow for hands-free operation, as the 2.0 version does in the U.S. This is not a major weakness, as the system will still lock on to the lane and follow even curved roads ahead, but it will warn you within five seconds if you remove your hands from the wheel.

Looking at the Ariya in person, there’s certainly a sense of futuristic sophistication there. The standard LED lights bring a large and bright V-shaped element to the grille and a flat, textured panel artistically hides various sensors. 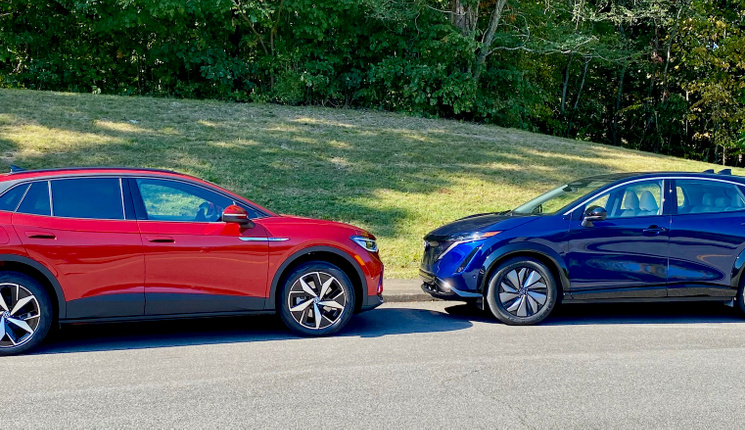 We happened to cross paths with a colleague testing a 2023 Volkswagen ID.4 at the same time around Nashville and parked them side by side for a closer look and some quick photos. This Nissan has a steeper-sloping rear glass, with a twin shark fin antenna and a more aggressive rear spoiler that portrays a more SUV-coupe side profile compared to the ID.4’s more conventional shape, even though I preferred the ID.4’s more open alloy wheel design over the Nissan’s fully-covered aero-focused rims.

Climbing into our U.S.-spec Empower+ tester, there’s a notable step up in elegance from the ID.4 and Hyundai Ioniq 5 interiors. There are LED accents within the doors and under the dash that continues the nose shield’s 3-D Japanese “Kumiko” pattern. There’s plenty of legroom made available by pushing interior climate control components under the hood – although that does mean no frunk, which will disappoint some EV owners. 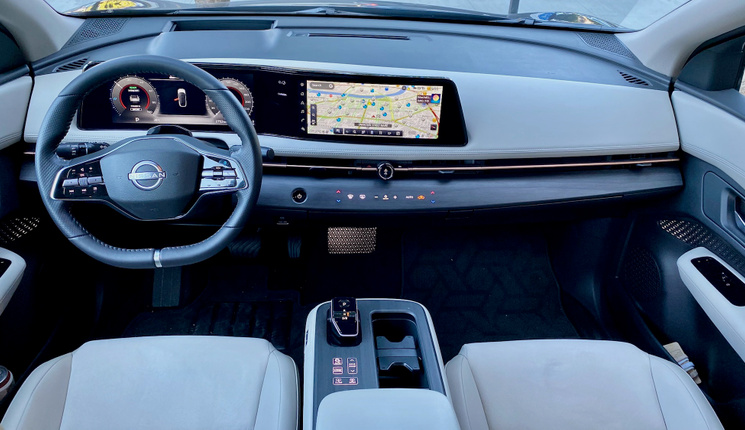 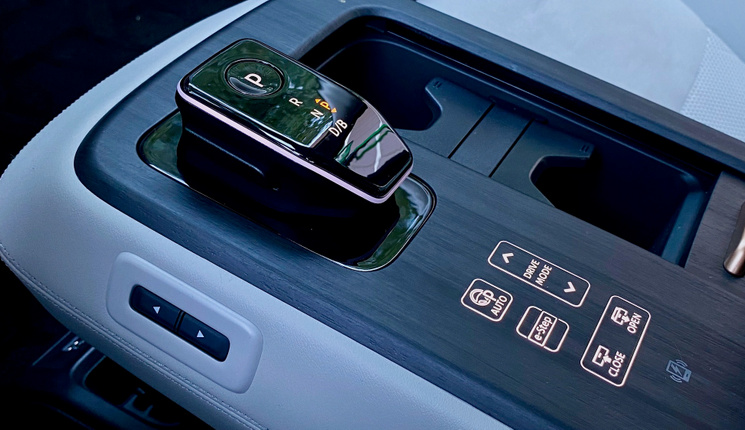 There are also very few buttons or switches outside of the steering wheel, with climate controls smoothly integrated into the natural wood grain finish on the dash. Also unique is a centre console with can be powered back and forth, and also incorporates lit-up buttons into the wood grain, which still provide haptic feedback when touched. These adjust the Drive mode to Eco or Sport when pushed up or down, respectively, though there’s no noticeable boost in power for Sport mode.

The e-step function allows the driver to toggle between more or less regeneration, but it won’t achieve Tesla Model 3-like heavy retardation in the switchbacks or bring the Ariya to a full stop. Both my driving partner and I missed the extra driving involvement and more precise control a regeneration paddle would add here, as in the Chevrolet Bolt or others.

Speaking of driving fun, the Ariya has a comfortable and quiet personality, but it’s no powerhouse, at least in front-wheel drive form with the larger battery we tested. It offers 238 hp and 221 lb-ft of torque, which is a step up from the FWD offerings with the standard battery, which is rated at 214 hp and 221 torque. It’s a typically smooth and refined EV experience.

All-wheel drive versions will offer increasingly more power as you rise up trim levels, with 335 hp and 413 lb-ft of torque in Evolve e-4orce models, while Platinum+ versions hit 389 hp and 442 lb-ft of torque. These AWD models will likely compare better with their Korean rivals, although for now there’s no performance model to battle the Kia EV6 or Mustang Mach-E GT’s.

Nissan has clearly learned and adapted from its ground-breaking Leaf, which debuted more than 11 years ago in Canada. The Ariya features active liquid cooling on its batteries and CCS charging, two features not available on Nissan’s pioneering but aging Leaf EV, which is passively air-cooled and therefore limited in fast charging speeds. Unfortunately, the Ariya tops out at a max DC quick-charging speed of 130 kW, or roughly half the speed of its key Korean rivals from Hyundai and Kia.

The company says it chose components that favour a flatter DC charging curve instead of a high spike which quickly then drops to lower speeds. That may be the case, but Nissan’s quoted 20-80% quick charge times suggest its notably slower to charge overall, coming in at 35 minutes for the Ariya of with the smaller 63 kWh battery, and 40 minutes for the larger 87 kWh pack. 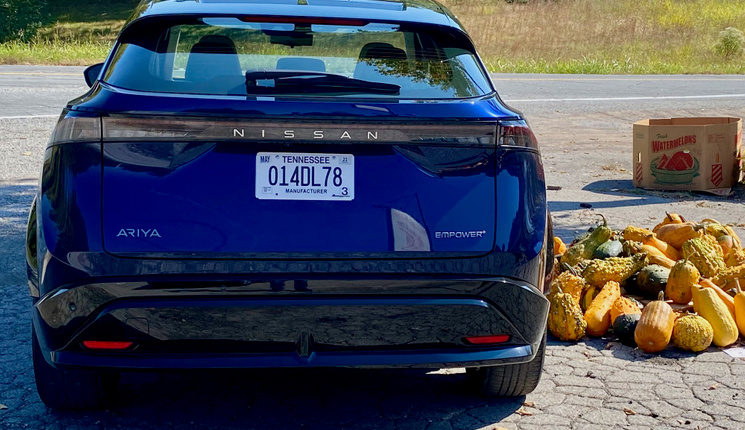 Using the 7.2 kW onboard charger, Nissan quotes Level 2 charge times of 10.5 and 14 hours to 80% and 100%, respectively, which suggests Nissan is not recommending against fully charging every night. But given the relatively small 3-4 kWh buffer between the Ariya’s total and usable battery capacity and the chemistry of the underfloor-mounted lithium-ion battery, owners will likely be wise to charge to 90% or so in normal use, as other companies using similar chemistries often do.

Buyers looking for a family-friendly EV will find that the Ariya is not the least expensive or quickest-charging in this class, but offers a high level of future-ready sophistication in a comfortably roomy yet compact package that is roughly the size of a Rogue on the outside but closer to a Murano on the inside.

TOW RATING: Not recommended for FWD