Join the Conversation (0)
It has often been said that if one wants a glimpse at features – safety, luxury, or otherwise – which will be found on mainstream vehicles within the next decade, it would be wise to look at the newest variant of a Mercedes S-Class sedan. That model was one of the first to broadly implement features now found across the industry such as night vision and adaptive cruise control, plus gets rightly credited with one of the first sets of (reliable) anti-lock brakes – a safety tool without which many of today’s drivers would not be able to function.

These days, the market is deeply entrenched in the SUV body style, with an eye firmly on the future of electric vehicles. Enter the EQS family of SUVs, a set of large-and-in-charge machines packing acres of the latest technologies and available three-row seating all riding atop a platform specifically designed for electric vehicles. In other words, it will ably attract the moneyed set just like the S-Class did before a high seating position and electric drive consumed the frontal lobes of this nation’s one-percenters.

First, a note on naming conventions. If the moniker ‘EQS’ looks familiar, that’s because they are also appended to an equally large all-electric sedan; we drove those models last year and you can find their stories here. Mercedes-Benz has decided to simply append the “SUV” identifier to all its high-riding variants; in other words, expect to also find an EQE SUV and EQB SUV – and perhaps an EQC SUV – in showrooms sooner rather than later. Like their sedan counterparts, the third character of a model name (B, E, S, et al) denote its place on the Merc totem pole. 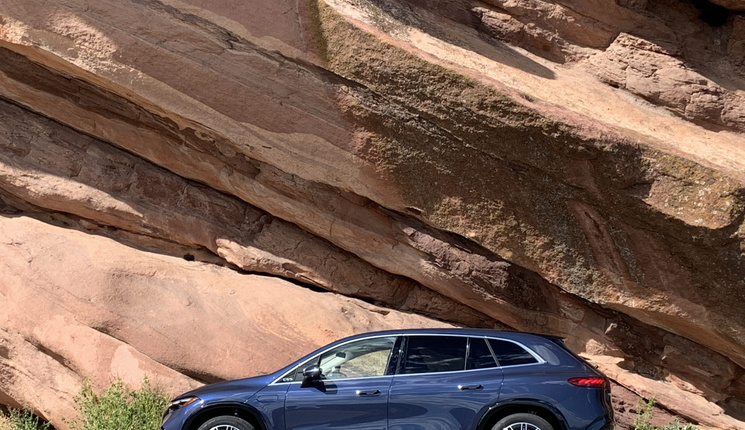 With that out of the way, let’s dive into this top-rung SUV, one which docks squarely in the prime berth of an all-electric market. It is the third model using this architecture developed for electric vehicles as its base, sharing a 126.4-inch wheelbase (3210 millimetres) with the EQS sedan but stands more than 20 centimetres higher thanks to its lot in life as an SUV. For reference to existing vehicles in the house of Mercedes, its 201.7-inch (5125 mm) length is about four inches (100 mm) shorter than the range-topping GLS gasoline-powered SUV, as is its overall height. Width is roughly identical. Maneuvering is impressive for its size, with standard rear-axle steering of 4.5 degrees, with 10 degrees offered as an option. We tried the 10er in dense city traffic and enjoyed its ability to easily escape tight spots. 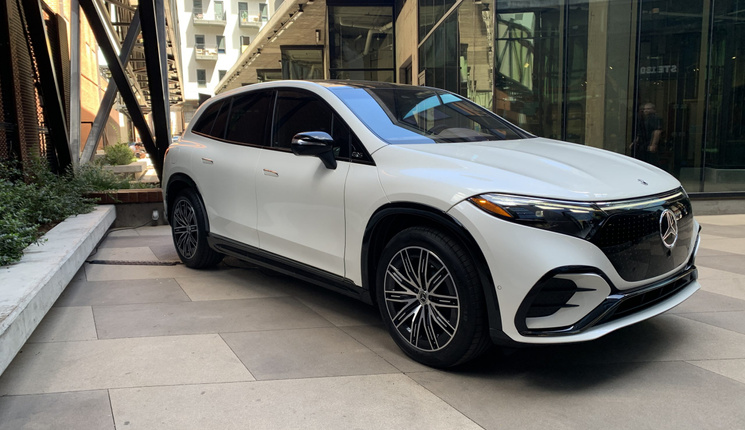 Two models of the EQS SUV, with two different power outputs, will be offered to Canucks later this year. The 450 4MATIC makes 355 horsepower and 590 lb-ft of torque from its electric motors, while a 580 4MATIC will crank the wick to 536 horses and 633 units of twist. Climbing to elevations over 10,000 feet in the mountains of Colorado, the so-called “lesser” of these brothers never once felt short of puff – unlike your author who tires far too quickly at those altitudes while trotting to a coffee shop for yet another infusion of caffeine. In fact, showcasing these rigs in this environment put an exclamation point on the fact that electric cars tend to make the same amount of power at extreme elevation as it does at sea level. This cannot be said of vehicles with internal combustion engines. Driving range on a full battery (107.8 kWh net) is estimated by NRCan to be 459 kilometres; our testing involved a mix of urban and highway driving with plenty of acceleration and aggressive battery regeneration, resulting in an indicated consumption of 20.6kWh/100km. If that reading was accurate, and we have no reason to suspect it was not, exceeding that 459km rating could be easy.

Sampling the 450 after the 580, with nearly two hundred fewer horses, may have seemed like a recipe for disappointment. It wasn’t. In fact, the 450’s accelerator was far easier to modulate than that in the 580 (whether using one-pedal driving or simple regenerative braking), creating a smoother driving experience. Unless one plans to regularly test this car’s towing capacity or perpetually have occupants in all seven seats, our buying advice is to save twenty grand and stick with the 450. Speaking of hauling a septet of people, Mercedes has decided to make the third row of seats optional rather than mandatory; binning them sheds a small amount of weight and creates a more agreeable cargo area. 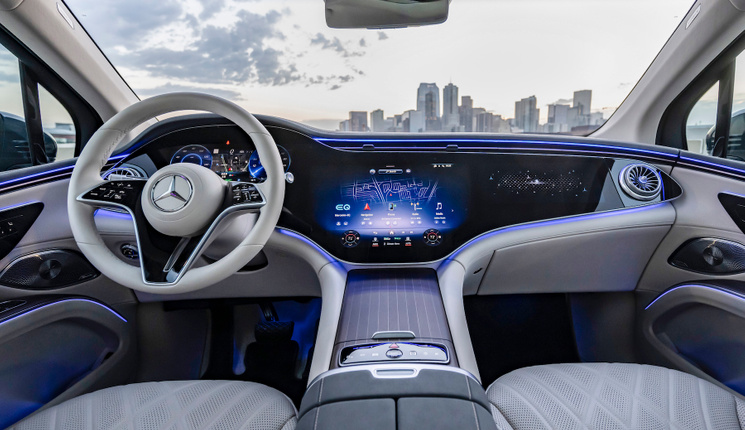 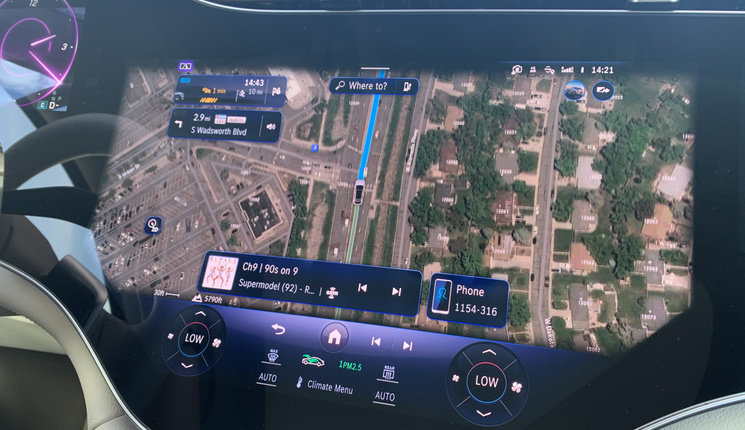 The interior of this ultra-luxurious SUV is typical Mercedes, which is to say inch-perfect in its construction and swaddled in some of the finest materials found in showrooms today. Space is vast for this 6’6” writer, save for the third row which is best suited for youngsters, with plenty of head- and legroom in both the front and second rows of seats. Gazillion-way adjustments ensure everyone’s comfortable, though we did prefer the sportier chairs with sculpted headrests to the cushier units whose pillowed headrests felt as if one were resting their noggin on a fat puppy. A Dolby Atmos sound system can use the entire cabin to create a 360-degree experience – on some tracks, certain instruments will sound as if they are behind you, placing the listener directly on stage with their favourite lead singer. 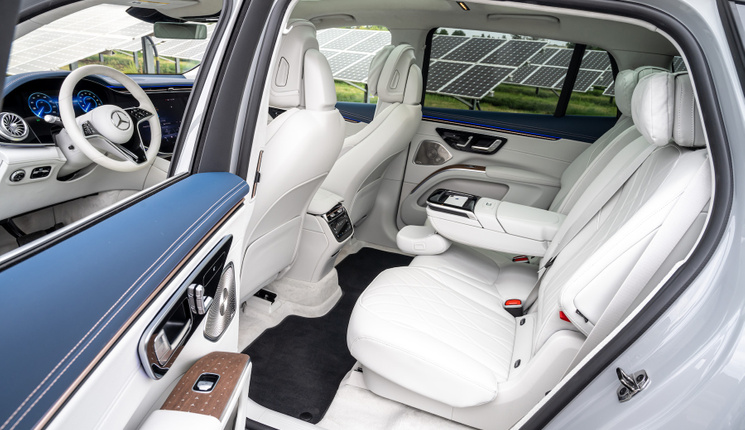 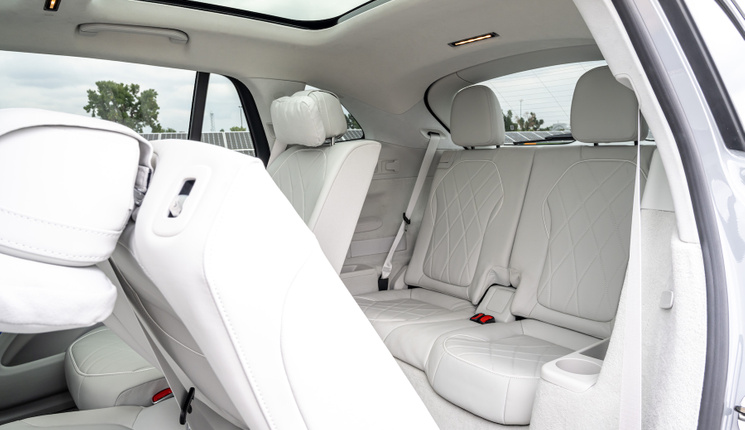 It is in here where one will find the types of innovations mentioned in the first paragraph of this story, starting with the so-called Hyperscreen – standard on the 580 and optional on the 450. This curved unit spans nearly the entire width of this car, hosting a trio of screens under a large glass cover which merges visually to create the appearance of a single curved screen nearly 5 feet (141 centimetres, to be precise) wide. A 12.3-inch OLED display for the front passenger gives them their own display and control area through which they can fettle with nearly every function of the car; this may sound like first-world tat but the helpfulness of providing tools so a passenger can futz with audio or climate without commandeering the central satnav screen while the driver is trying to navigate an unfamiliar city is a feature this author didn’t know they sorely needed.

Speaking of nav, the MBUX system includes typical platitudes such as route planning with convenient electric charging stops but can also incorporate an augmented reality directional system. As the driver approaches a turn, blue helpful arrows appear on the nav screen or heads-up display, overlaying the lane in which you need to be and growing in size as you get closer to the exit. It’s markedly like functions in console games such as Forza Horizon and tremendously blends helpful driver info with gee-whiz tech. Luddites, of course, can turn everything off. 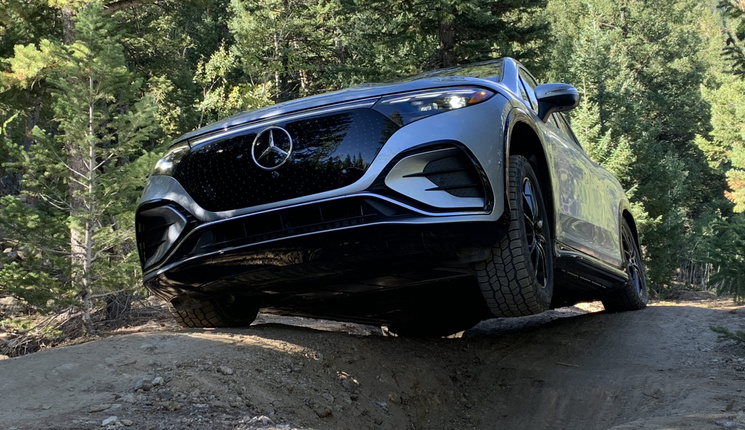 While customers of this six-figure SUV are unlikely to ever take it off-road, Mercedes was eager to demonstrate the dirt road chops of this EQS. Squeezing through trees (thanks, 10 degrees of rear steering) and descending steep rocky grades was an alien experience in such a luxury-focused machine but did prove the EQS SUV does have the skills to hang with others off-road and will get owners to their (third) cottage deep in the Muskokas or BC wilderness. Note well: Merc had replaced the road-focused Goodyears with a set of Cooper Discoverer AT3s for this portion of the journey.

Packing acres of luxury, forward-looking features, and the vaunted three-pointed star on its nose, the EQS SUV represents the sharp end of Mercedes-Benz efforts. Just like the S-Class sedan is often held up as the bellwether of future tech, so too is the tremendous EQS SUV in an increasingly digital (and all-electric) world.