Our first look at the next generation of Mazda crossovers.

Join the Conversation (0)
Mazda is going to great lengths to make its next-generation of large crossovers better to drive. Spending serious money and putting them on a platform that can't be used for smaller models during a time when other car companies are cutting their number of platforms quicker than unused post-pandemic office space. None of that matters, of course, if it hasn't managed to make the new models good to drive. Mazda set us loose around its European HQ in Leverkusen to find out.

The vehicles we're driving are badged CX-60. To make it clear, this crossover won't be sold in Canada and Mazda is quite firm about that. We will get the CX-70 and the CX-90, which is the equivalent of the three-row CX-80 bound for Europe. 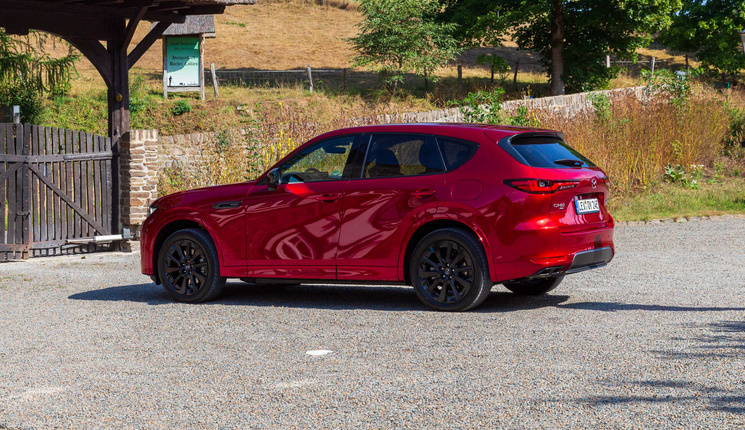 Why does the CX-60 matter, then? Because without giving away the farm, Mazda says that the only real difference between 60 and 70 (and 80 and 90) will be the width. Buyers here have the space so they want wider vehicles. In Europe the roads are narrower so buyers want a narrower vehicle.

So then this is a preview of the plug-in hybrid driveline, Mazda's first for our market, and a good look at the chassis. The end result of all of the fancy suspension work and longitudinally-pointed engine and transmission. We'll focus on the powertrain and dynamics over the cabin. 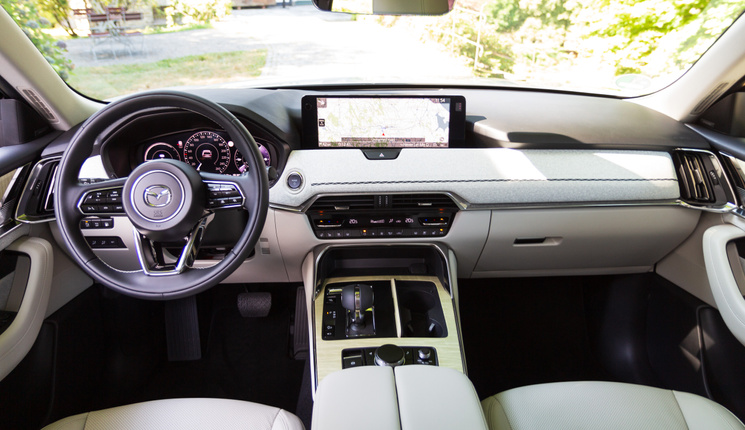 Not that there's anything wrong with the cabin. Mazda continues to surprise with interiors that go toe to toe with some serious lux and near-lux models. With touches like the woven fabric dashboard trim in the photos (Mazda calls the stitch technique Kakenui), maple wood finishes, and more of the surprises that are part of the Kuro Japanese heritage crafting that delight in its existing models.

Somewhat ironically, Mazda's senior manager for R&D, told Wheels that the recent push to emphasize the brand's heritage came from Europe, and not from home office executives.

The heart of the CX-60 PHEV is Mazda's first plug-in powertrain. A tweaked version of Mazda's familiar 2.5L four-cylinder is attached to an electric motor, then the gearbox is hung off the back. That motor, as well as the battery pack, come from Panasonic, but the PHEV system was developed by Mazda. The company is proud of that fact, and was quite clear it's not a rebranded system from one of its neighbours. 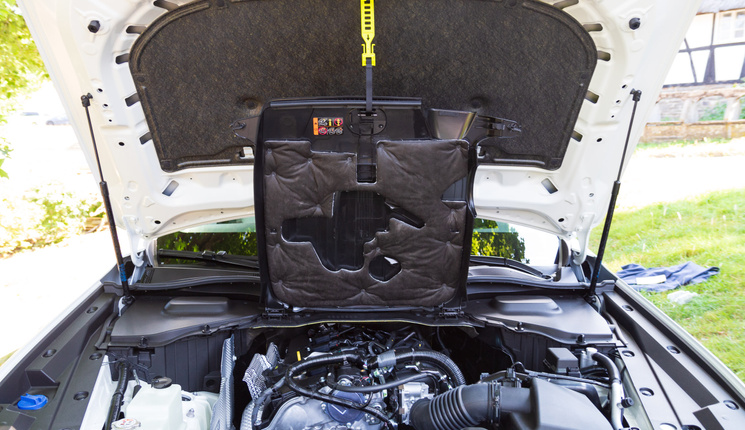 Putting the motor between the engine and gearbox has one big benefit: torque multiplication through the new auto's eight speeds. There are weight and complexity benefits too. This layout means Mazda can drive all four wheels with one single motor. It can also send more of the power of the motor and engine to either axle as needed.

The downside is that it needs a driveshaft running to the rear. The Toyota hybrid system (like in the RAV4 Prime) has an electric motor on the back instead and no driveshaft. We think Mazda is happy to make that "sacrifice" in order to provide a better driving experience.

The new eight-speed is all-Mazda, too, not the off-the-shelf unit most automakers use for their eighter. Mazda has gotten rid of the traditional torque converter, a turbine that spins in fluid that is the connection between engine and transmission in all conventional automatics. A second clutch is mounted between engine and electric motor, allowing the vehicle to drive purely on electric power. 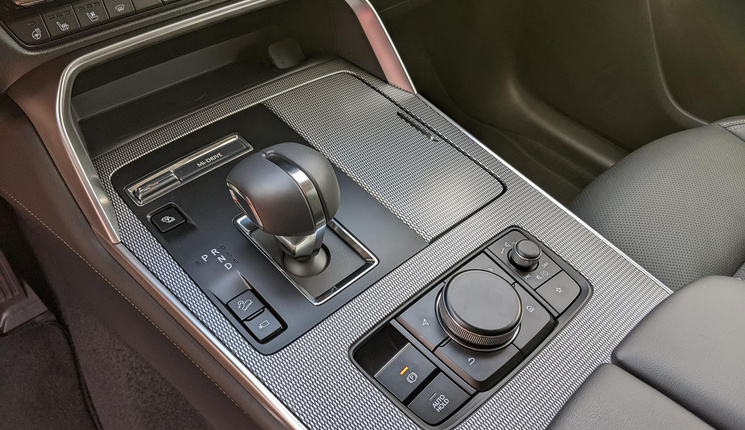 Getting rid of the torque converter cuts transmission internal losses by 22 percent, boosting efficiency. It gives the vehicle a more direct feel, too, Mazda says, because there is a multi-plate clutch ensuring a solid connection between transmission and power plant instead of the fluid connection.

A big benefit is that getting rid of the torque converter and the large bell housing that contains it frees up space. It makes the total package narrower, and that's especially evident in the cabin of this CX-60. Despite a transmission between you and your passenger, there is more knee space between the console and door than on the CX-5.

The gas engine makes 189 horsepower, the electric motor 173. Enough electric power that the CX-60 offers solid acceleration when it's running in EV mode, making sure you're not tempted to dip into the gas tank for more.

With both running full-out, the driveline peaks at 323 hp and 369 lb-ft of torque. Around 70 horses and 50 lb-ft more than the 2.5-turbo Mazda offers in many of its SUVs. The CX-60 gets up and goes when you call for full power, and on the Autobahn it continued to deliver good acceleration well into the triple digits. 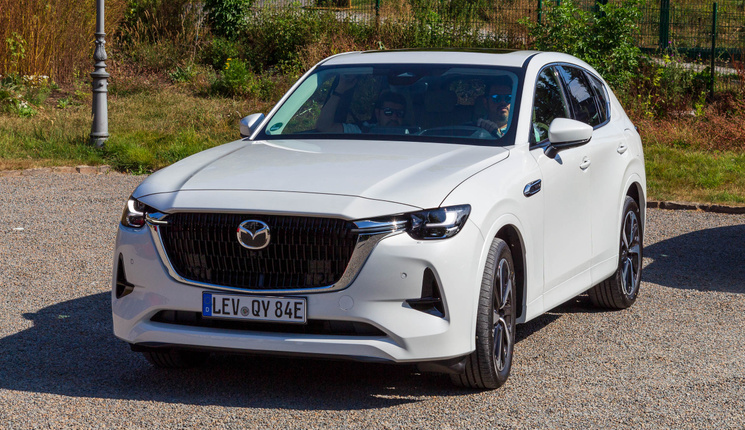 Still, acceleration didn't seem to quite match up to the quoted figures. Possibly because it's about 400 kilos heavier than the CX-5, which is definitely enough to notice.

Mazda's 17.8 kWh battery earns the crossover a rating of 63 km on the WTLP test cycle used in Europe. For a direct comparison, that's 6 km more than the similarly-sized Kia Sorento PHEV's 13.8 kWh battery. In Canada, Kia's 57 km translates to 55 km, so we would expect a CX-60, were it coming here, to just top 60 km of range.

Our tester was an early example of the CX-60's production, and that could have explained some of the issues we experienced. Some strange noises when pulling away from a stop, for one, and some jerky motions when sitting in stop-and-go traffic. It didn't like the repeated on-off in that situation, jolting us around in the vehicle more than is ok in a modern PHEV.

The point, of course, of Mazda bringing us so far from home, is the platform and its suspension. So, do they deliver?

For the most part, the chassis does. Yes, German roads are smoother than Canadian pavement an hour after it came out of the paver, but that doesn't stop us from taking notes on the handling.

Typical for Mazda, the CX-60 has turn-in that's sharp and crisp. Body roll in corners is reduced by braking the inner rear wheel. Mazda calls the system Kinematic Posture Control and it does seem to help control the body on some narrow and twisty roads. 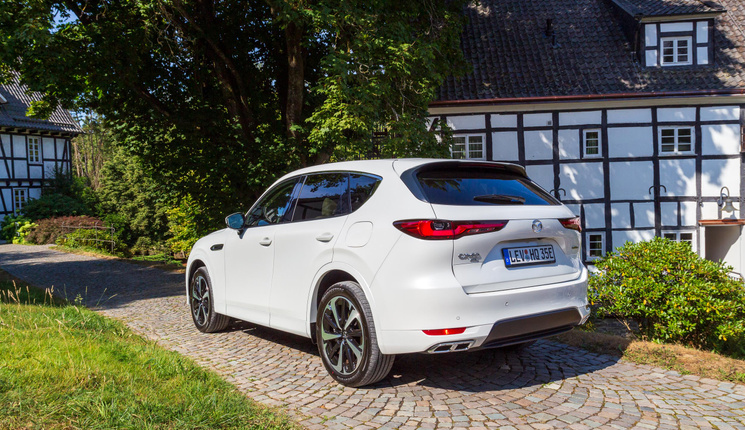 Part of the purpose of a double-wishbone front suspension, what Mazda has used in its new platform, is to make sure the movement of the wheels is more smoothly controlled. They go up and down on a single axis instead of moving around on multiple axis as in a Macpherson strut setup. The design does work and it does increase how solid the CX-60 feels on the few bumps we do find. It also increases stability and improves steering feel since the wheels aren't moving in multiple directions at once.

How are the dynamics? The CX-60 rides and drives better than a CX-5 despite its much higher weight and larger size. It leaves the CX-9 (and anything else that big) in the dust. In my head, I was comparing the ride to compact crossovers, not the midsize models it should be up against.

If you like what Mazda has been doing with its last couple of generations of vehicles, this will give you more of it. The new platform and new suspension let Mazda make this an even better drive, while the PHEV driveline gives Mazda a much-needed electrified competitor.

The CX-90, the wider three-row version of this platform, will be the first to arrive in Canada and, frankly, it can't come quickly enough. As long as Mazda can iron out the drivability issues in the PHEV system between now and then.