Join the Conversation (0)
SANTA BARBARA, Calif. – Of all the Lexus SUVs that have been recently remade and updated, none are of greater importance for the future of Toyota’s luxury brand than the mid-size RX.

The RX was the first premium crossover when it debuted in 1998, and it is, by far, the bestselling Lexus in North America today. Sold as a gas and gas hybrid (since 2005) model, the RX has led the way for the brand, particularly in Canada, where it is not only the Lexus sales leader (150,000+ lifetime sales), but also its manufacturing base since 2003. The RX has helped Canada become the fourth largest Lexus market by volume on earth, trailing only the U.S., China, and Japan.

The arrival of the fifth gen, which was first revealed in Texas in late May, marks a significant departure for the nameplate, beyond new styling and packaging changes a new generation usually entails. While the 2023 RX checks those boxes, it also marks the debut of two new models: a high-performance hybrid and a plug-in hybrid. 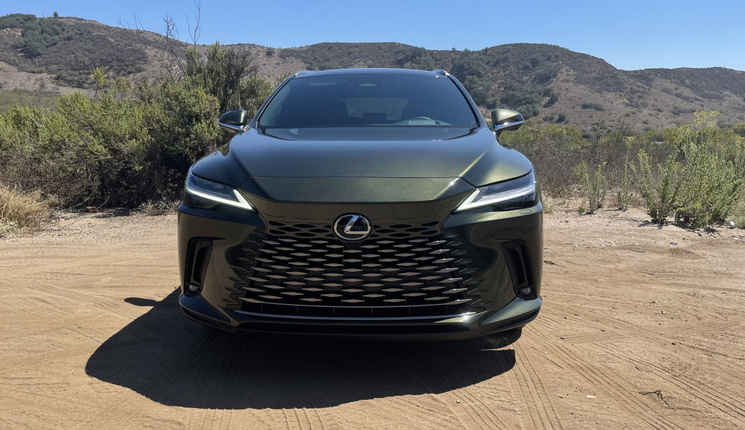 These two models, the 500h F Sport Performance and the 450h+, were part of the recent media preview drive I attended in California, but there’s an important caveat.

The 450h+ plug-in hybrid will not be available in North America when the rest of the 2023 RX lineup goes on sale later this year. Lexus is choosing to prioritize European and Asian markets for the 450h+ at launch, due primarily to tougher emission standards in those regions combined with a higher demand for electrified vehicles.

As a result, little information had been released for the 450h+ at time of writing, and Lexus Canada reps were unable to say with certainty when the car will arrive in Canada. Sometime in 2023 is my guess, but it’s just a guess. Two pre-production 450h+ units were on site in California, and I drove one for about 10 minutes, but given the lack of information and its delayed launch for our market, there’s not much point in discussing it further.

There’s plenty to say about the others, however. The powertrain breakdown for the ’23 RX is as follows:

450h+ AWD – 2.5-liter 4-cylinder with 18.1-kWh lithium-ion battery pack and E-four motor (horsepower and torque figures have not been released)

In my RX first look story I discussed mechanical and design changes, so to avoid repeating myself this time around I’m going to focus primarily on packaging, available features and driving impressions.

The Lexus Interface, which is slowly finding its way into the entire Toyota / Lexus lineup as models are updated and replaced, is standard issue on all RX trims. The 9.8-inch screen is standard on the base Premium model, but the 14-inch unit is included on all trims from Luxury and above. 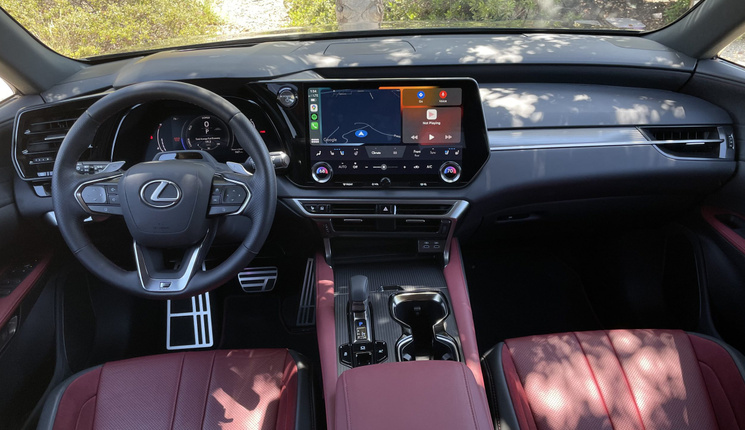 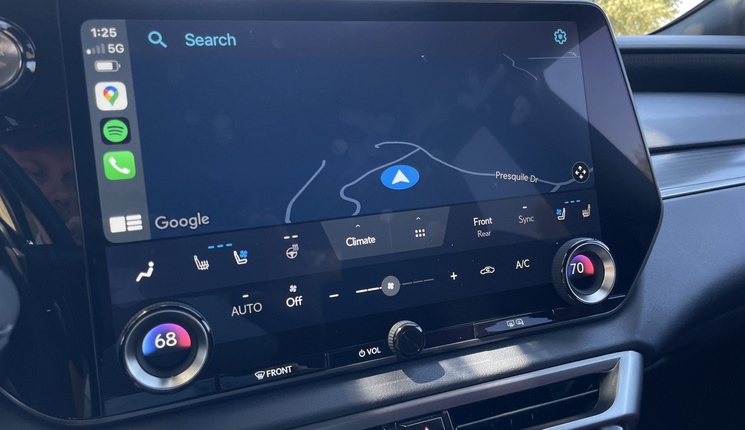 These new screens include features such as cloud navigation, points of interest data powered by Google, wireless Apple CarPlay and Android Auto, and Intelligent Assistant, which supports voice commands after a “hey Lexus” voice summons.

A couple of notes before getting into impressions. First, all units I drove in California were pre-production but based on what I saw looked close to final. Second, Lexus hadn’t announced pricing and fuel consumption figures were not available at time of writing.

I won’t dwell too much on the RX’s looks apart from saying that I think the new styling appears modern and contemporary and will serve the brand well. Its longer dash-to-axle ratio, combined with a “nose-like” hood and offset LED headlights give it a bolder stance compared to the outgoing model. The full-width taillight and stretched Lexus wordmark, like the new NX and LX, add an air of sophistication. 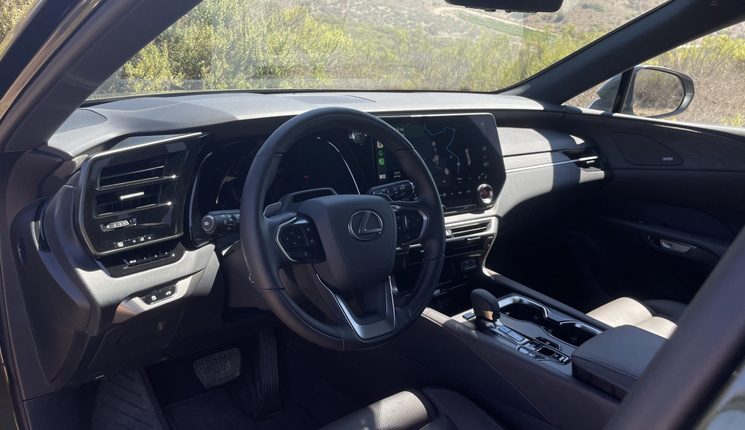 On the inside, the new screens in the instrument cluster and at the top of the centre stack are really striking. I had a similar thought when I drove the new NX last September, but these changes, combined with the jettisoning of the long-running touchpad, gives the RX a much more sophisticated and premium feel.

I also noted the speakers located in the front doors are surrounded in a pleasing fabric, with a curved, three-dimensional shape that is also lit by ambient lighting. This is an impressive premium touch, that is echoed by a pleasing array of soft-touch materials. The plastics, fabrics and metallic-accented trim panels and switches I interacted with all had a quality feel, and the controls are laid out in a logical fashion.

As for the drive, all three RX models (350, 350h and 500h) I spent roughly an hour in (each) impressed in their own way. I think Lexus’ decision to arrange the RX offering in a way that will appeal to different buyers is a wise strategy. There’s something for everyone here, not just in the way they’re designed and packaged, but also how they perform. 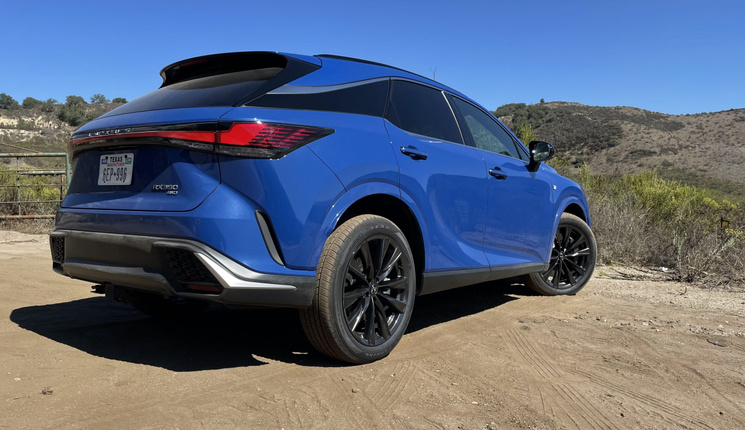 The 350, for instance, offers spritely acceleration from its 2.4-litre turbo, a pleasing turbo growl under load and surprisingly good handling on undulating and twisty California roads. The unit I drove had some F Sport extras on it, including bigger wheels, stickier rubber, and adaptive suspension tuning, but even when accounting for that it still felt stuck to the road with good steering response and little body lean.

The 350h, on the other hand, strikes an impressive balance of comfort, luxury, and efficiency, with a quiet ride, smooth powertrain performance and competent handling that didn’t feel too soft or mushy. Roughly a third of Lexus sales in Canada are electrified, so the 350h will continue to be a prominent player moving forward.

Finally, of all the RX units I drove, the 500h is the most intriguing. It combines the 2.4-litre turbo of the 350 with an 80-kW rear axle motor and inverter that delivers near instant power to the rear wheels, along with a high-output nickel-metal hydride battery pack. Its DIRECT4 AWD adjusts torque power delivery between the front and rear wheels in milliseconds to improve handling. 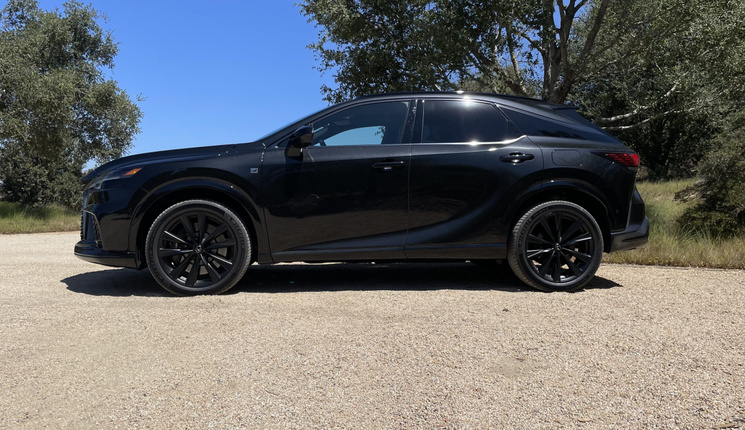 I’ll say this about the 500h – it’s the fastest Lexus SUV I’ve ever driven. Plus, its handling reflexes are sharp with little body roll, responsive steering, and braking that is whiplash-inducing. This SUV was made for twisty two-lane tarmac. The F Sport goodies help, for sure, as do an electronic rear diff and torque vectoring, but I don’t remember another Lexus SUV with a 0-60 mph (97 km/h) time of 5.9 seconds. I’ll just leave it at that.

In sum, I’d say the 2023 Lexus RX is poised to continue as sales leader. It’s been number one in its segment since 2008, according to Lexus, and that trend is likely to continue. Lexus has set a 20 percent sales growth target for the new car, which is ambitious, but given the offering it seems doable especially once the 450h+ is fully available worldwide.

Lexus is headed for an all-electric future by decade’s end, and the new RX appears ready to lead the way.

The 2023 Lexus RX goes on sale across Canada later this year. The RX 450h+ will arrive at a date to be determined. Pricing and fuel consumption will be announced closer to launch.