Now in its fifth generation, the Sportage is at the sharp end of a cutthroat segment.

Join the Conversation (0)
It's tough to think of a vehicle that has changed more in the last 20 years than Kia's Sportage.

Remember the vintage ads where a swamp-styled homage to Crocodile Dundee encouraged a pair of confused tourists to belt out a nervous "ayeee" yell? We're pretty sure Kia would prefer it if you didn't.

Today, Sportage has just entered its fifth generation. Like many millennials, it has grown up in the last 25 years. It has grown larger, heavier, has a fresh new look, and is now much more concerned about the state of the planet. It has also jumped on tech that would have been unimaginable back when the body-on-frame first-gen Sportage was conceived. 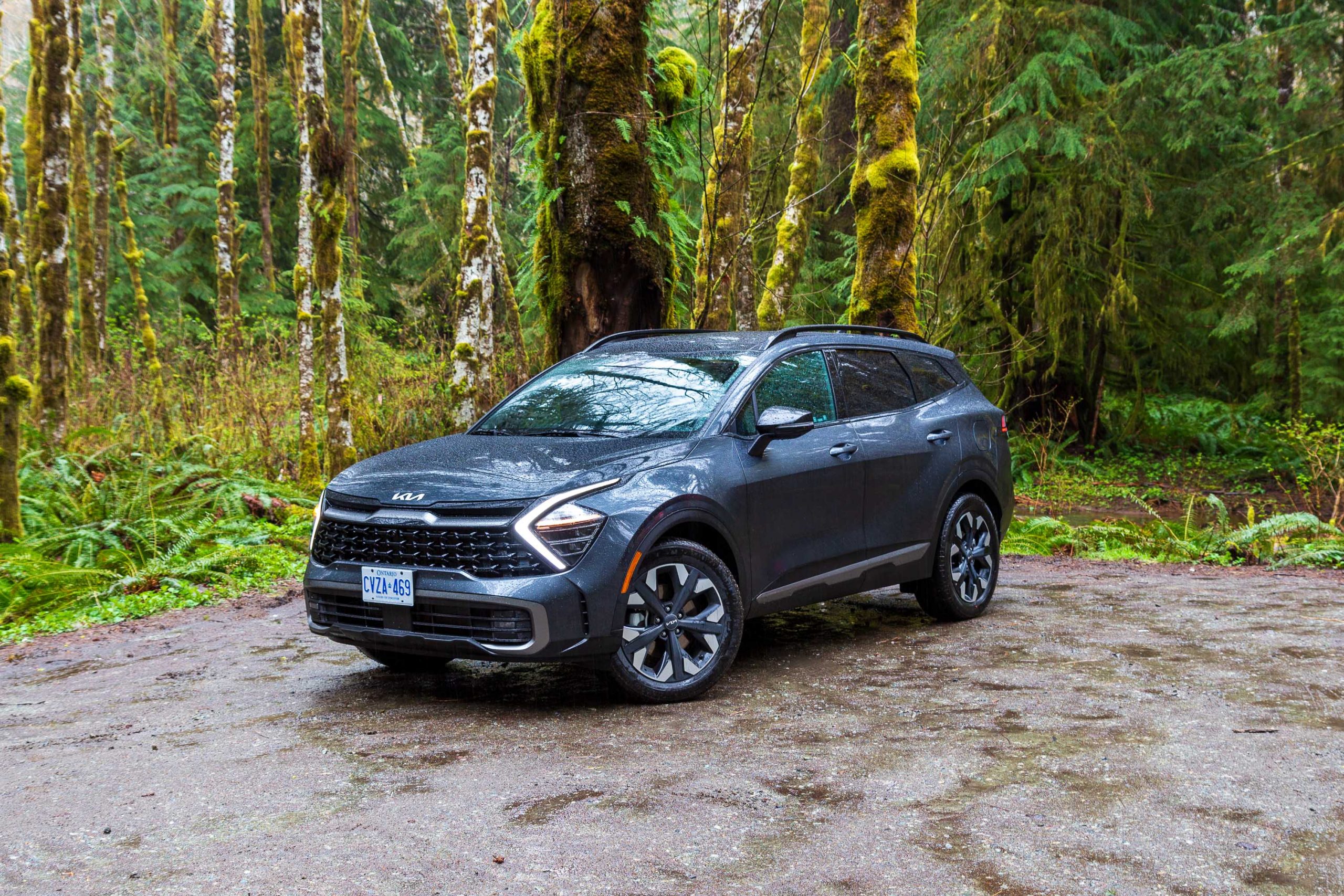 We're not kidding about it being larger. In the years since the previous Sportage went on sale, Kia has introduced the Telluride, grown the Sorento, and launched a new entry-sized model called Seltos. The shift has let Kia's engineers grow the wheelbase 85 mm and overall length by 180 mm (to 2,775 and 4,660 respectively). What was one of the smallest vehicles in the class is now one of the biggest.

How big? Try 1,121L of cargo space with the rear seats in place. That makes this the new class champ, beating the cargo van interior of Honda's CR-V. With the seats folded, it has 2,098L, which falls just shy of Honda's 2,146 but make no mistake, this is massive. It's 395L more cargo space than the old Sportage; enough extra space that Kia added seat-fold levers in the cargo area.

The rest of the cabin is large, too, offering loads of headroom and legroom for passengers front and rear. Thank the longer wheelbase for that boost in back-seat space, and rear-seat passengers can take advantage of a reclining backrest and Kia's clever USB-C charge points in the back of the front seats. 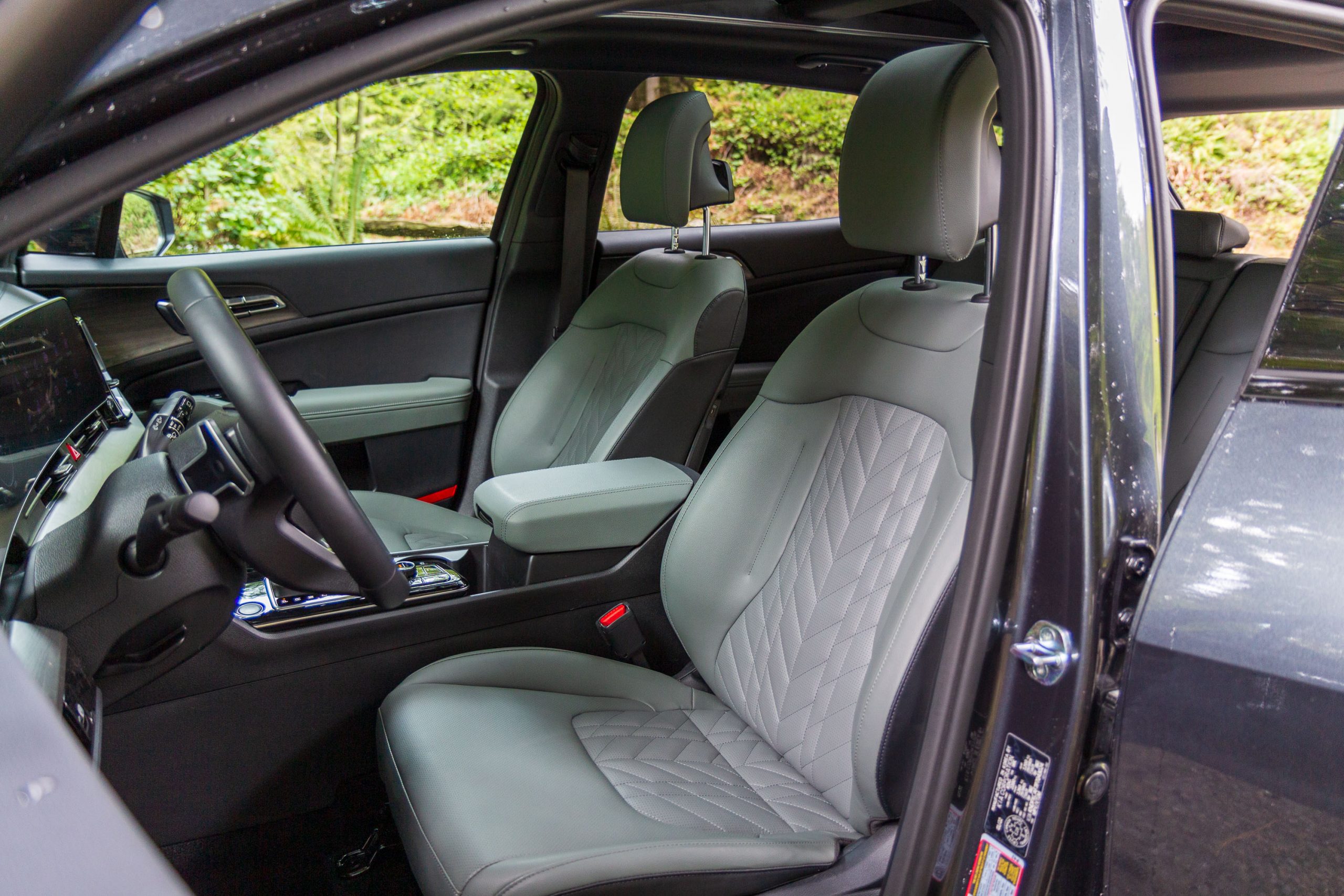 Kia calls the sharp styling part of its Opposites United design language. We call the razor-sharp creases and boomerang headlights absurdly cool, though we'll acknowledge it might not be a win from the rear three-quarter view.

New for 2023 Kia has launched an X-Line trim, the automaker's nod to buyers who want their crossovers to look a little tougher. X-Line (the trim in the photos) is just an appearance pack, though, with front and rear fascias that look a bit like skid plates, and a green hue for the well-bolstered and very comfortable seats. It is off-road style without the fuel economy or comfort sacrifices of extra off-road capability.

All Sportage models get a wraparound dash panel that integrates infotainment and dash displays. They all get a fully-digital dash, too, though only X-Line Limited gets the fully customizable screen. LX and base X-Line grades use an 8.0-inch infotainment system with a matte plastic bezel to fill the space in place of the full-glass 12.3-inch dual displays of EX and up.

It's not quite as appealing visually, but buyers with the smaller system get the wireless versions of Apple CarPlay and Android Auto. Call it a consolation, because the big screens don't. Kia says it hasn't completed that part of the development of its 12.3-inch system. 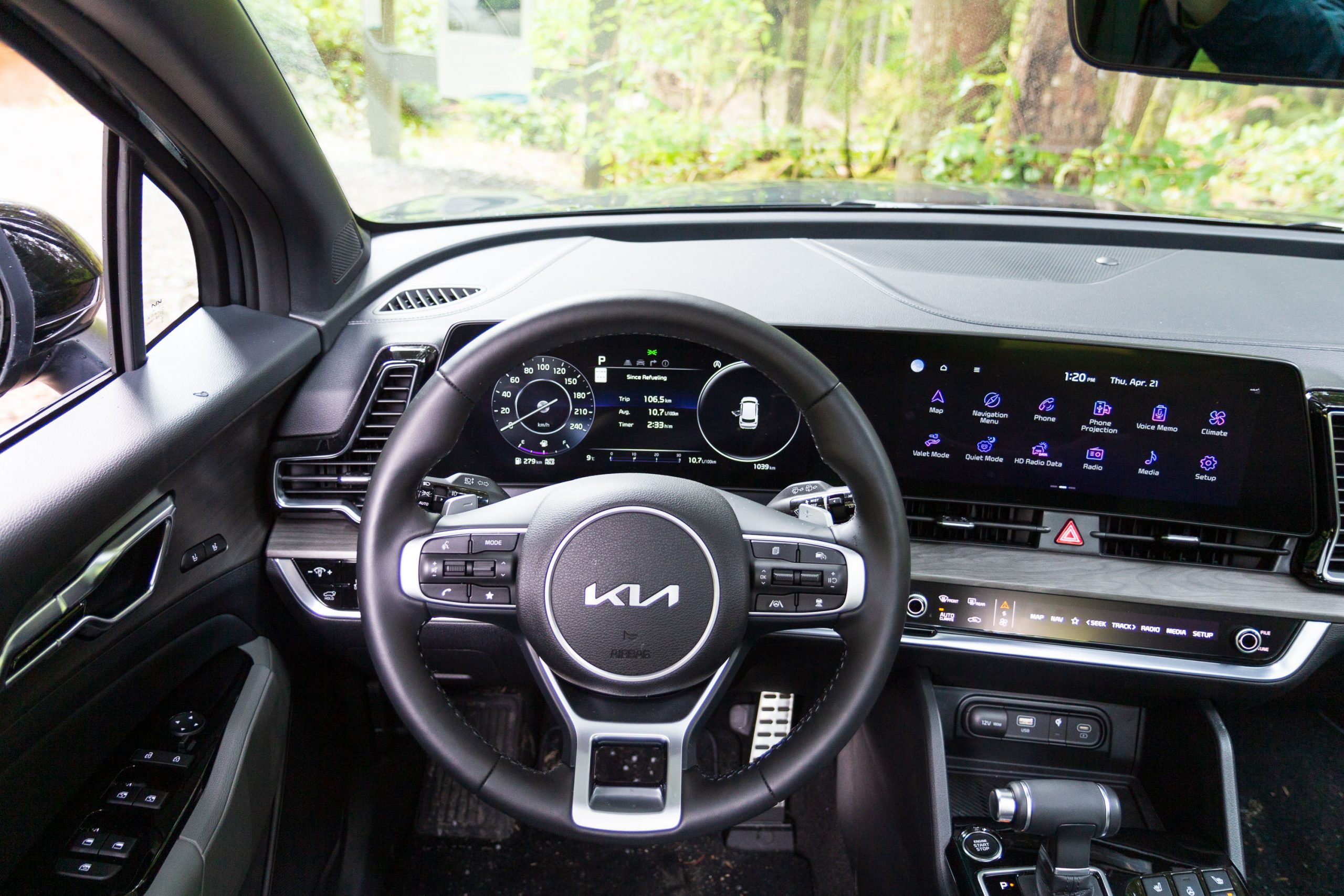 Everyone gets Kia's fancy new climate control/audio panel. It's the same panel we've seen before in the EV6: press the navigation arrow and you have a volume knob, tuning dial, and infotainment buttons, press the HVAC fan icon and suddenly the same buttons adjust the air conditioning. It's as functional as it is cool, and it is very cool.

Other new features include memory settings for the power seats, and if you get the power tailgate you get four height settings to make sure it can accommodate operators running the full range of heights (and garage sizes).

X-Line Limited is the only one to get rear parking collision avoidance assist and Kia's swanky Blind View Monitor system that shows a camera view letting you see directly beside the vehicle when you signal. It also adds a Surround View Monitor parking camera that lets you scroll the cameras around the Sportage. A trick that was only on six-figure luxury cars just a couple of years ago. 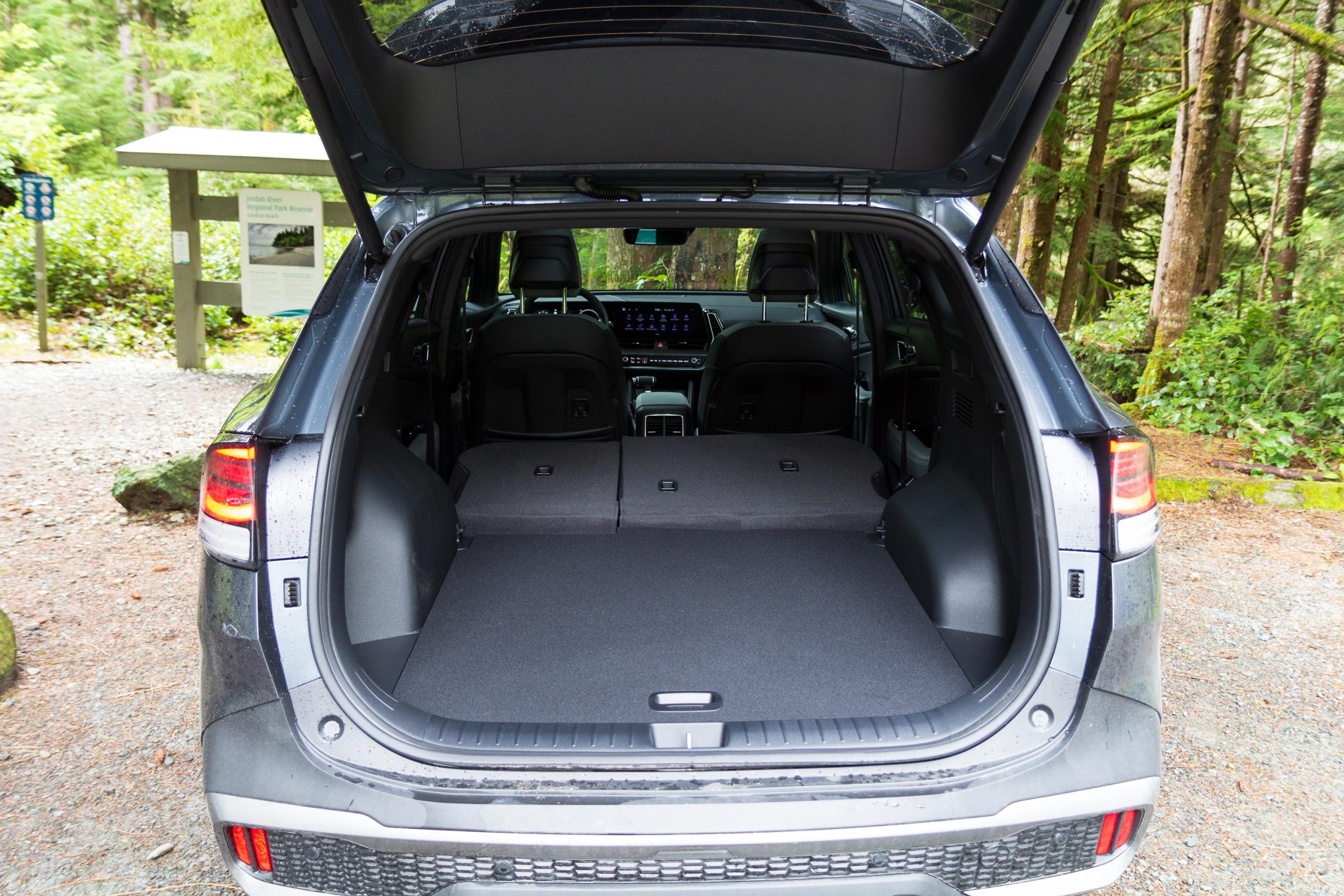 While a Hybrid is coming (it should be at dealers anytime now), and a PHEV hits later this year, the only option for gas buyers is a 2.5L four-cylinder paired with an eight-speed auto making 187 hp with 178 lb-ft of torque. Just six hp and three lb-ft more than 2022's 2.4L.

Get into the 2023 Kia Sportage and you're greeted with a small-diameter steering wheel that feels satisfyingly chunky in your hands. The T-handle gearshift is also a tactile delight, one that's exclusive to the 2.5L (the electrified models get a smaller e-shifter).

Sportage delivers on the promises of those controls on the road. Our test route around the southern tip of Vancouver Island offered up twisting roads and ribbons of pavement that begged for a proper sports car. It also had sections where I was glad that I was in a crossover and not that sports car I had been dreaming of. It would have lost a bumper or worse.

Over both of those types of roads, the Sportage was a delight. Compared with the rest of this segment, it was as much fun as the Mazda CX-5. The new platform is larger, but it's also much stiffer and that means a rock-solid shell that emitted not a creak, rattle, or complaint over bumps that had us making sure the wheels were still round.

The enjoyable chassis was dampened by an engine that was having no part of our fun. The 2.5L feels more lethargic than the displacement or power figure says it should. Reluctant to rev, the engine is at least quiet when you're not asking it for rapid acceleration, and that quiet extends to low levels of road and wind noise even on the highway.

Call it one more point for the hybrid. We've not yet driven the 227 hp and 258 lb-ft hybrid model, but we've driven the same powertrain in other vehicles, and it's a big upgrade from the 2.5. The PHEV model, which makes even more power and torque, should be an even bigger improvement, though it'll take a bit more cash and won't show up for a few more months 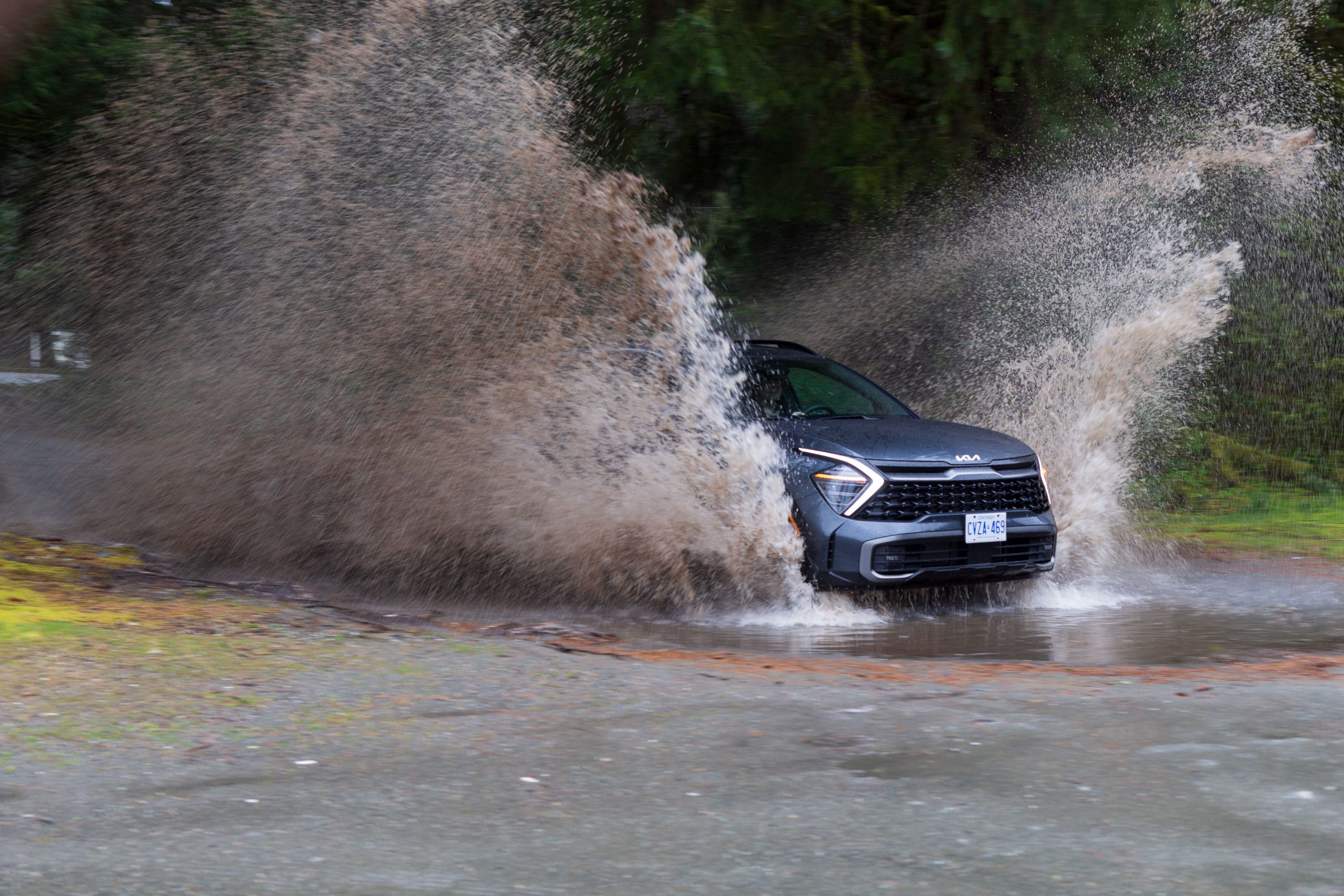 Much larger and much better equipped, the 2023 Kia Sportage is (surprise!) more expensive. It's a small increase by 2022 standards, though, now starting from $28,395. It's hard to argue with how much more you get for that price, though, and Kia keeps its typical in-segment value pricing.

The Kia Sportage might have grown up, but, like its fellow millennials, it isn't ready to stop having fun. It's a very serious player in an extremely competitive segment, and it ticks boxes we didn't even know existed. The lacklustre 2.5L four is the only mark written down in the negatives column, leaving me wishing Kia had included the 2.5T from the Sorento or some other more potent gas engine choice. Then again, the hybrid is right there, starting from $35,995, and solving that big issue.

The verdict? Expect to see a lot of boomerang headlights on your daily drive starting very soon.