The most fuel-efficient model on sale today.

Join the Conversation (0)
The Kia Niro is the only model on sale today that offers a hybrid version, a plug-in hybrid, and a full EV. It's a surprise not because of the engineering effort required, but because Kia expects more than 70 percent of sales to be the EV model. With just a few hundred units a year, it would have been easy for Kia to ignore the combustion-powered Niro models or drop them altogether. But the company didn't, and we're ready to find out why.

First up, the basics of the 2023 Kia Niro HEV and PHEV. The second-generation Niro is larger than the model it replaces, growing by 65 mm in length to 4,420 and 20 mm in width to 1,825. The larger size translates to more rear legroom (by an impressive 61 mm) and slightly more headroom both front and rear. It also gives the all-new Niro slightly more cargo space. Enough for a few extra milk jugs, giving the Niro 646L with the seats up and 1,805 with them folded. 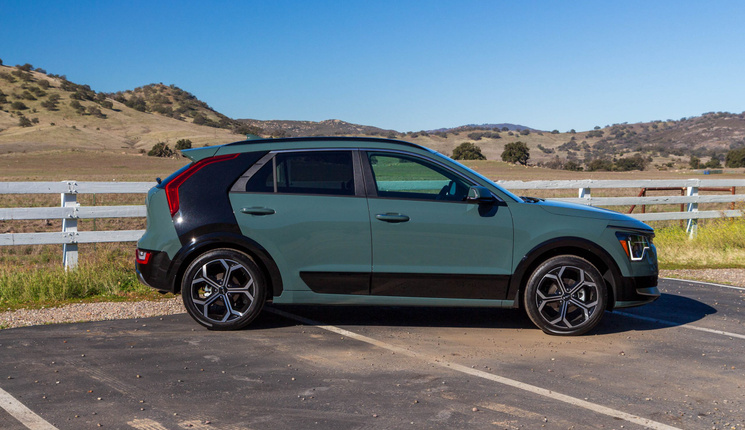 No longer is the Niro a sort of amorphous blob of design. The new Niro gets a new version of the company's tiger nose front end, though the hybrids don't have the tiger nose bump of the EV. Inspired by the 2019 Habaniro concept, the production car gets a "heartbeat" accent light signature.

Niro has more detailing along the side, too, along with more cladding. That cladding is offered in shiny or unpainted black finishes. The silver version is reserved for the EV. It all makes for a much more appealing and certainly more distinctive vehicle than the Niro that came before.

What you'll probably notice first, though, is the aero blade at the rear, especially on versions that have it finished in gloss black. Body-colour is available and makes the fancy rear-end treatment blend in if you prefer. 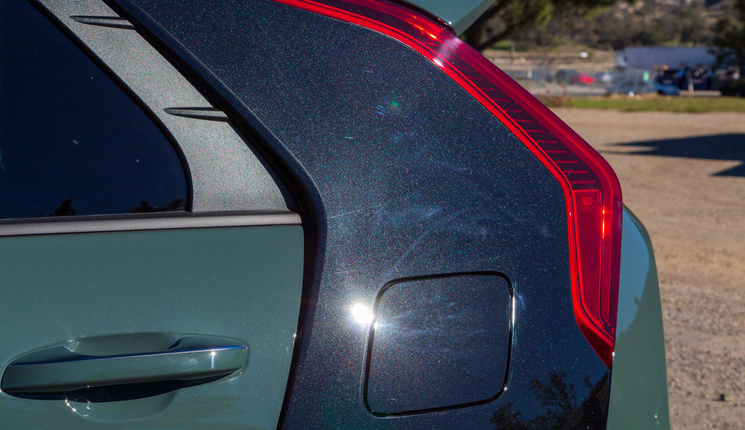 It's more than just a styling exercise. The aero blade helps keep airflow attached to the sides of the Niro as it passes to the rear. This reduces turbulence behind the vehicle and is a boost to range and efficiency. It also helps reduce the formation of vortexes along the windows as you drive, and is part of why the Niro is both amazingly quiet and solidly stable in heavy winds.

With or without a plug, both Niro hybrids get the same gas engine. Like last year it's a 1.6L four-cylinder, but it has been improved with a new cylinder head, the ability to run lower viscosity oil, and with a higher compression ratio and more pressure for the fuel injectors. At 104 hp and 106 lb-ft, the output doesn't change, but efficiency does.

In the hybrid, a 43 hp electric motor boosts total output to 139 hp and 195 lb-ft of torque. While that's a reasonable figure for the class, the Niro hybrid's get up and go is lacking on both get up and go. While the engine's kick-in is nearly transparent, the engine itself isn't. You'll need plenty of throttle for merges and passing, and in those situations it makes itself heard. Kia's choice to use a dual-clutch automatic instead of the usual hybrid CVT is an excellent one, though. Eliminating hybrid drone and making the driving experience a much better one. 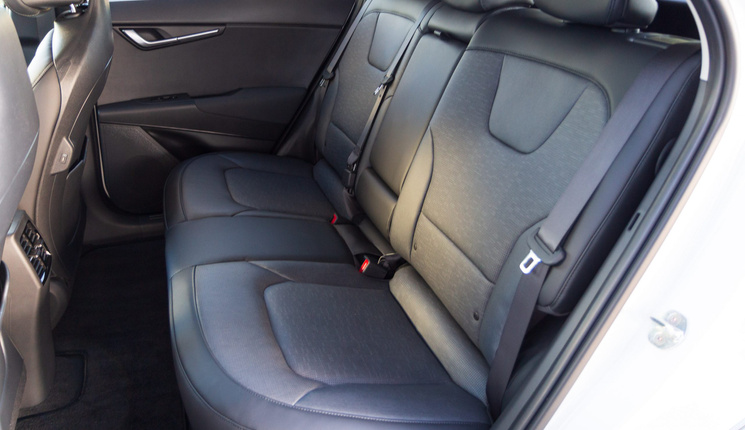 We weren't able to drive the PHEV model - Kia expects it to be the lowest-seller and is only offering one trim level - but it does get some more oomph. A more powerful 83 hp electric motor boosts total output to 180 hp with 195 lb-ft of torque. A slightly larger 11.1 kWh lithium-ion polymer battery promises up to 55 km of range which is impressively efficient.

The HEV models we drove were top-spec SX models, so they had 18-inch wheels on top of everything else Kia can throw at them. Features like ventilated front chairs, Harman Kardon audio, head-up display, and phone as key.

They're stylish, but the 18-inch wheels make a big difference to ride quality compared with the 17s on the EV. Every Niro HEV below the SX has 16s and those are probably the ones you want. Not just for the lower cost of tires, but because the 18s turn the ride from pleasantly firm (in the EV) to verging on harsh. With the low levels of wind noise resulting from the aero blades at the rear, tire noise is suddenly a much bigger issue as well. 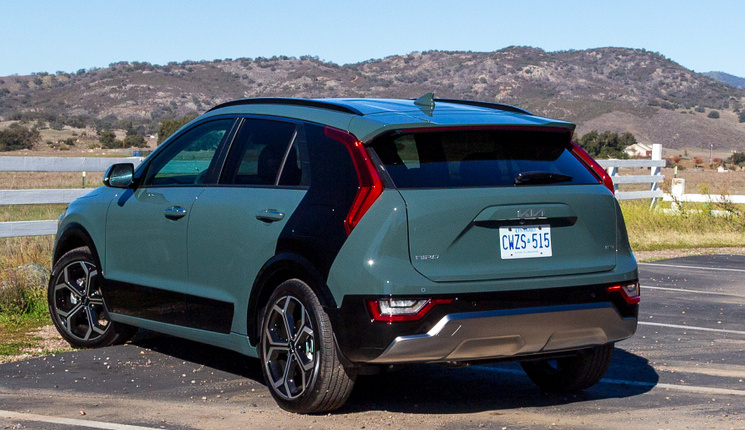 It might not be fast, but it is efficient. Kia's hybrid driveline promises 4.5/5.2 L/100 km city/highway in the SX, and we saw that on our test loop. The non-SX models get 4.4 L/100 km highway/combined, the best highway (and combined) fuel economy of any 2023 model-year vehicle (without a plug) the government has listed. Astonishing for a vehicle with this much passenger and cargo space.

Basic Niro models get an 8.0-inch centre screen and a 4.2-inch digital cluster in the dash, while EX and up get Kia's twin 10.25-inch screens with navigation. All of them get Android Auto and Apple CarPlay, but the twin-screen with no hood and one solid bezel is a big upgrade cosmetically as well as functionally. That EX might be the sweet spot, since it has adaptive cruise and a heated wheel, for just $2,000 more than LX. 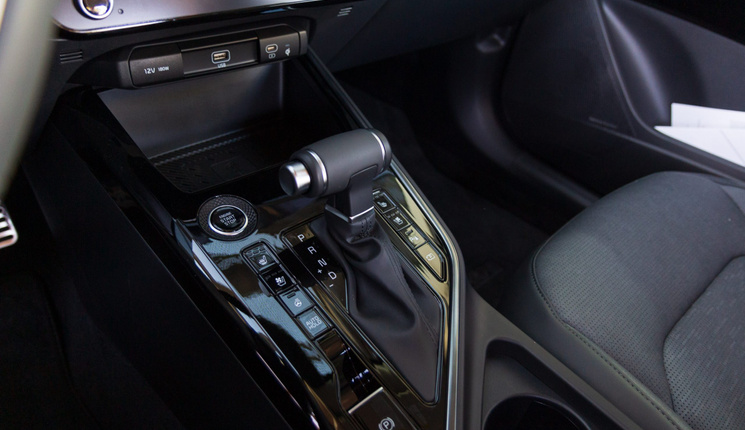 The system uses Kia's latest digital panel for climate control that forces you to push a button to swap between HVAC and audio controls, but Kia gave us a new tip. Press the swap button for a couple of seconds and you can choose a default mode for the panel. So no more remembering, guessing, or looking down, the panel will always be on your pick of the HVAC or audio controls. Then one press swaps it for about three seconds while you make your change. It's a fix for a problem Kia created, but it's a good one.

Standard driver assists include blind spot collision avoidance, rear cross-traffic alerts, lane keeping, rear seat occupant alert, and forward collision avoidance. EX adds smart cruise with highway driving assist and rear parking sensors, and SX gives you front sensors. So nearly all of the tech is on base and all the best stuff is on EX, helping to democratize the features.

Even with the new design, the Kia Niro isn't exactly exciting, but don't let that fool you. This is a very solid vehicle that offers loads of passenger space and class-leading cargo space seats up or folded. It also gives you better fuel efficiency than any other new vehicle on sale today and loads of tech with a starting price under $30k. In 2023, that's an accomplishment. If you hadn't thought about giving the Niro a look before, it's definitely worth one now.