Join the Conversation (0)
Las Vegas, NV – With acceleration and power figures worthy of a $300,000 Italian exotic, the new $75,000 Kia EV6 GT electric crossover is making a serious performance statement not only for the brand but also about electric vehicles in general.

“We don’t need a TV spot to sell the EV6 GT,” said Kia America’s vice president of marketing Russell Wager, since Kia’s priciest vehicle ever will also be sold in relatively limited numbers, with roughly only 10 per cent of all EV6s expected to be this top 576 hp all-wheel drive version. “It will let people know that there are performance electrics at Kia, and will help drive awareness that EVs are not only for saving gas.”

A performance barbarian that still has four doors, a power-operated hatch, and plenty of cargo room for the family. Plus “Drift Mode” and a zero to 100 km/h time of 3.6 seconds, to help it compete with top-of-the-line go-fast trim levels in similarly quick electric rivals like the Ford Mustang Mach-E GT and the Tesla Model Y Performance crossover EVs. 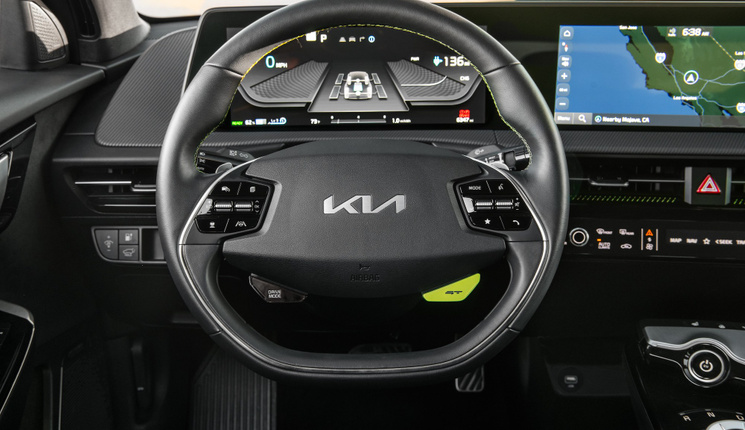 But unlike most top-trim Kias, the EV6 GT actually goes down a notch not only in ride-focused comfort, but also convenience features inside. This may be a bitter pill for some potential EV6 buyers who don’t want to give up their comfy power-operated memory seats, or their ventilation function. Instead, all GT models will receive snug GT-marked sport bucket seats, and it will be the only EV6 model to use manual adjustments on the driver and passenger seat.

To prove that the EV6 GT has true track-worthy moxie, Kia added more extensive track exercises than usually seen even on hardcore Porsche or Audi RS launch events. There were track driving laps behind a pro as well as on your own at the Las Vegas Motor Speedway, multiple runs on the facility’s quarter-mile drag strip – where the three time slips I kept consistently showed mid-to-high 11 second times at roughly 118 mph (190 km/h) – a smoky demo ride of Drift Mode from the passenger seat, plus a separate section for you to then try out Drift Mode from behind the wheel. 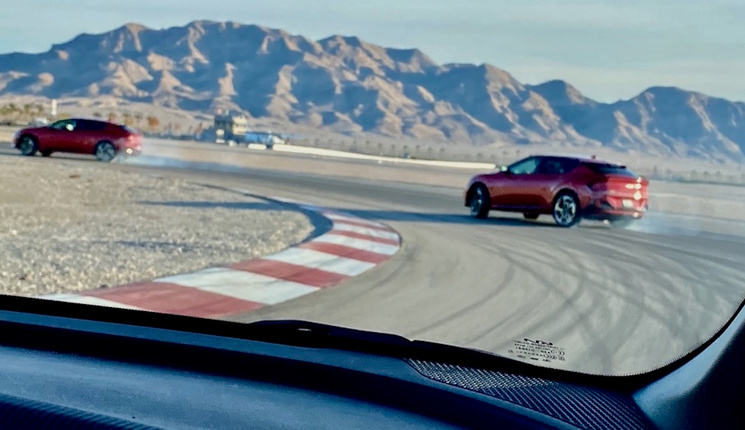 There was clearly little regard for the many expensive rubber donuts (21-inch Goodyear Eagle F1s) that were tortured into screaming, smoky submission by Kia’s hired driving pros. The fact that we happened to be on the last wave of this North American launch likely added to this disregard, and with no need to save tires for later testers, likely extended our track time as well.

Kia folks seemed somewhat secretive about the elaborate sequence needed to put the EV6 GT into Drift Mode, which sends more power to the rear motor, and loosens up the traction and stability control systems to the point where it’s largely off – even in tail-out banshee hooliganism mode at the track. It needs the driver stopped and in Park to enter the GT mode using the bright green GT button on the steering wheel, then press and hold the stability control button to the left of the steering wheel, then pull back on both paddles until a notification pops up that all driver safety nannies are off.

Congratulations, you’ve now entered the semi-secret Drift Mode. And it quickly became clear why Kia made sure no driver could access these tail-out histrionics accidentally.

Us non-pro drivers constantly spun it in Drift Mode – and the pros occasionally did too. Even under controlled track conditions. With no frost or morning dew or misplaced gravel to reduce traction, as could easily happen to drivers on the road.

Kia challenged us with an outwardly simple tail-out skills test. From a standing start in Drift Mode, just get the tail out enough to do a smoky half circle, controlling the EV6 GT enough to bring it back through another parallel set of pylons in the opposite direction. 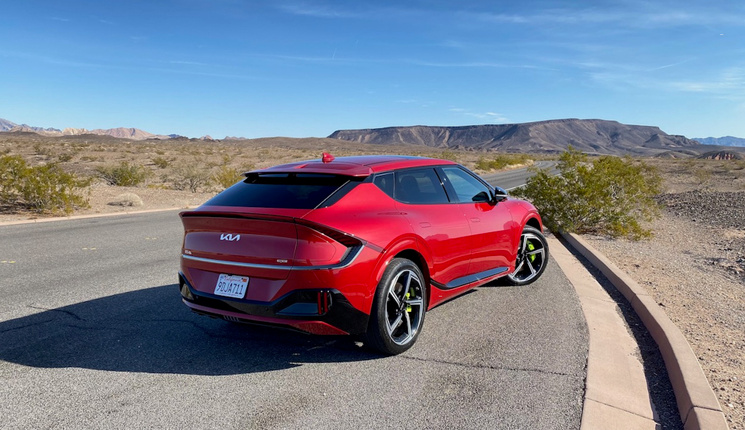 But putting down 545 lb-ft of instant-on electric torque in a relatively heavy EV means the amount of time you have to counter-steer disappears in a fleeting split second, requiring a more delicate accelerator push from rest before an assertive roll-on of electrons to swing the back end around right at the same time you counter steer – if you wait for the skid, you’re too late, as it whips around too fast.

All to say that the super powerful EV6 GT is a handful in Drift Mode in any environment, so best to save it for the track or empty parking lots you know well.

To spot an EV6 GT, the easiest giveaway are the bright green calipers on all models, since the 2023 GT wheels look very close to the current top-line wheels offered on EV6 GT-Line models, but much more open, to better ventilate (and visually highlight) those large 15-inch front and 14.1-inch rear disc brakes. 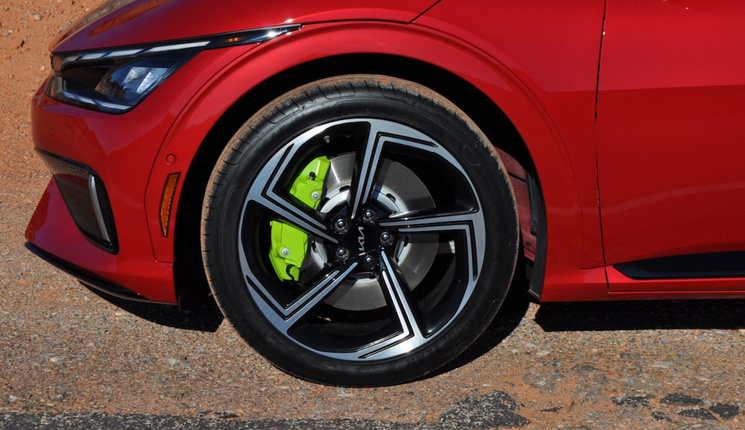 More bright green accents abound inside, with piping on the seats, steering wheel and dash all matching the green GT button that stands out prominently on the flat-bottom steering wheel. There’s a wireless charger inside, USB and USB-C charge ports up front along with two more in the rear, plus Android Auto and Apple CarPlay, but sadly only of the wired variety. It’s a modernly attractive interior, if you like green especially, but it’s not very luxurious for its $76k-ish asking price.

From an everyday livability standpoint, if you’re comfortable in the tighter seats of the GT and don’t mind manually adjusting them each time your partner uses it, all of the other practical goodness of a regular EV6 is on display here. Headroom is slightly less than the taller and boxier Hyundai Ioniq 5, which has the same 77.4 kWh battery that has the capacity to charge nearly as quick as any EV in the business, courtesy of its 800-volt architecture and 230 kW max DC quick charging speed.

On a rare but powerful 350 kW DC quick charger, this could mean a 10-80% charge in as little as 18 minutes, Kia estimates, though cold and (painfully) common charger slowdowns could lengthen this time. On more common 50 kW quick chargers, the same charge would be closer to 73 minutes. But most folks will charge at home overnight on a (highly recommended) 240-volt charger, which from a 10% charge to full would take approximately seven hours, or largely the same as any EV6 with this long-range battery. 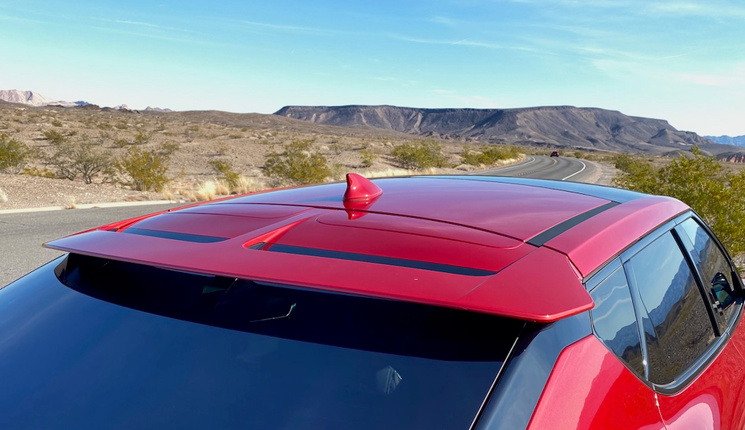 Perhaps the biggest downside to the EV6 GT for most potential buyers is its relatively low rated range: 332 km. Kia officials suggest that the required rating system averages out range in all modes including the barn-storming GT mode, so that drivers that use Eco mode will see much better than official range. That may be the case in ideal conditions, but on our chilly (for Vegas) 10 degree Celsius morning, our 100% charged EV6 GT suggested 319 km of expected range.

By the end of the test, we had traveled 234 km in combined city and highway conditions and used 72% of the range. Its dash suggested it could comfortably travel another 82 km, putting it within a mere three kilometres of its morning prediction. But keep in mind we didn’t use this tester at the track, which clearly would have eaten up the range and affected its surprisingly efficient 23.4 kWh/100 km figure. 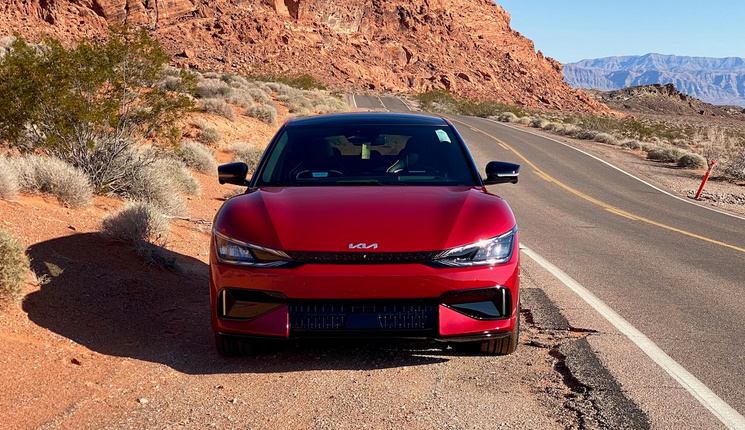 In the end, while the extra 256 hp and 99 lb-ft of torque provides effortless passing or merging, and one of the best performance bargains in the current automotive universe, many drivers will be happy with the 320 hp and the less boa constrictor-like seats of non-GT EV6 models.

But if I had to pick one vehicle that provides it all, which I would be happy to use as a daily driver for family duties as well as for supercar thrills as a weekend toy, there’s little to nothing on the market now that provides so much performance and practicality for anywhere near this price.

PRICE: $74,495 not including destination fee, taxes and options