Join the Conversation (0)
Jeep has always been the go-to adventure brand even when off-road vehicles weren’t as popular as they are now. But as #offroadlife becomes the next biggest hashtag amongst the Instagram and TikTok crowd, Jeep is suddenly well ahead of the game. The new plug-in hybrid Wrangler 4xe not only pleases eco-junkies but it can also take you further out into the wilderness on silent battery power alone for that perfect social media post. Jeep now applies the same treatment to the family-friendly Grand Cherokee giving rise to the Jeep Grand Cherokee 4xe.

We’ve driven the Grand Cherokee a few times now in both its regular and long-wheelbase versions and have come away impressed with its handsome styling, versatility, and broad appeal. You can still get it with a Hemi V8, although you’ll have to spring for the three-row version to get it. It also packs some serious towing capability along with a luxurious interior packed to the brim with the latest in tech and driving aids. 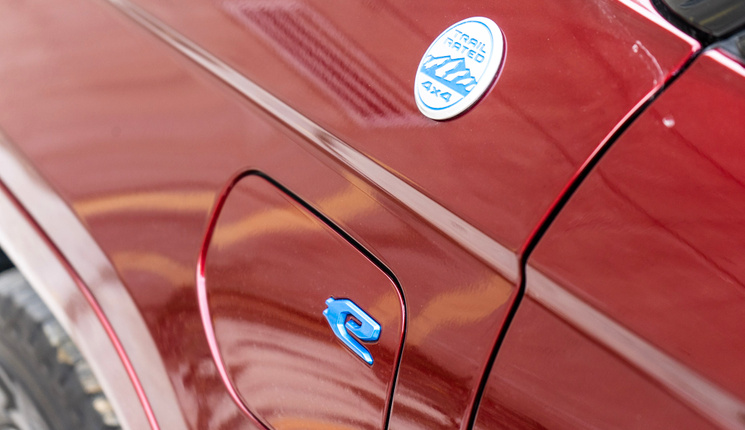 A quick look at the specs of the new Grand Cherokee 4xe reveals that it is now the most powerful in the lineup with 375 hp and 470 lb-ft of torque, numbers that best even the V8. It makes this power from a combination of a 2-litre turbocharged 4-cylinder and an electric motor that replaces the torque converter of the 8-speed automatic transmission.

A 17 kWh battery pack mounted under the floor powers the electric motor and gives the Grand Cherokee 4xe up to 42 km of electric range. Charging via a Level 2 public charger or Jeep’s home charger will take about 2 hours. The 4xe will run in pure electric mode under light-medium loads but will fire up the gasoline engine if you decide to floor it and test the system’s full power.

Once the battery is drained, the system will automatically enter its default hybrid mode and act much like a typical hybrid blending electric and gasoline power. There’s also a battery save mode that will save the battery charge for use at a later time or it can be set to charge the battery using the engine as you drive along. 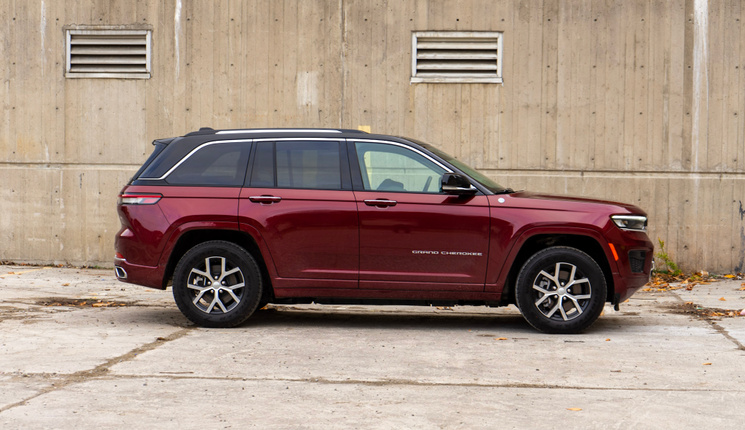 With a plug-in hybrid, you get the best of both worlds: quiet and efficient electric operation and a gasoline engine to keep you going when the battery depletes. If you have a short commute it could be all the electric car you need, however, it doesn’t come cheap. Prices start at $77,835 for the base 4xe, and the options are pricey. My Overland tester topped out a wallet-busting $91,565 after all the extras and fees.

At that price, the Grand Cherokee 4xe goes head to head with the Volvo XC90 Recharge, the BMW X5 PHEV, and the Audi Q5 TFSI e. While it doesn’t give up much to those when it comes to interior amenities and tech, the Jeep is at a disadvantage when it comes to overall refinement.

And this all boils down to the drive. When the battery is fully charged the electric operation is smooth, quiet, and seamless. However, when the charge runs low, the switchover to gasoline is like a rude wake-up call as the buzzy and raucous 4-cylinder fires up with little warning. At around-town speeds, the 8-speed transmission can exhibit clumsy shifts and the regenerative brakes are grabby and difficult to modulate smoothly. It feels like a first-generation plug-in hybrid that hasn’t had all the kinks and bugs worked out.

The Volvo and BMW feel almost exactly like normal gasoline-powered vehicles and that’s what you want in a plug-in hybrid. They also have nicer interiors with better-feeling materials and more badge prestige. 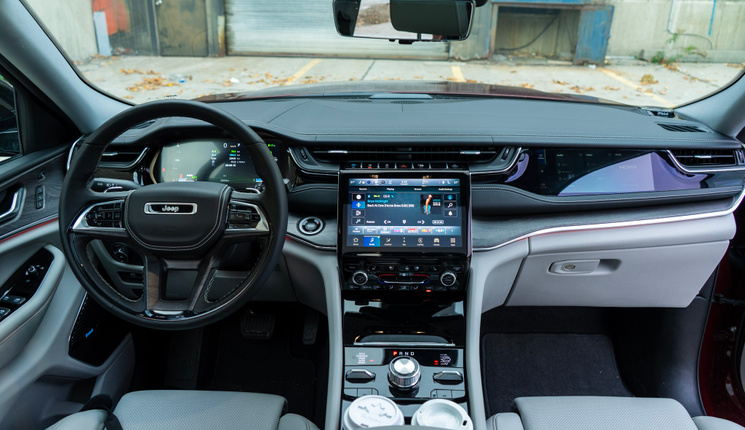 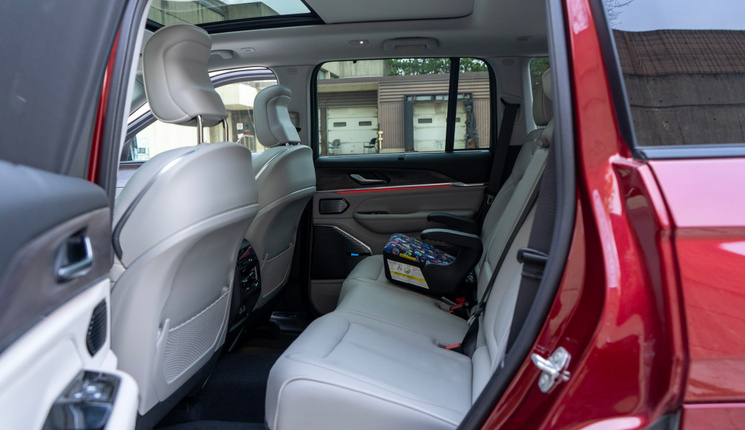 The Jeep might not have that "premium" badge it's built tough enough to handle the abuse of a serious off-road trail. A trail-rated badge on my Overland tester means that the Grand Cherokee 4xe isn’t just a boulevard cruiser with a jacked-up suspension and all-wheel drive like so many others in this class. Equipped with an optional off-road package it gets skid plates to protect the electronics, a robust 4-wheel drive system with an electronic limited-slip rear differential, a bevy of off-road drive modes, a 4WD low setting for the rough stuff, hill descent control, and a tow rating of 2720 kg (6000 lbs).

And while the cabin might not be as well finished as that in the Volvo or the BMW, it’s still nice enough to almost justify that lofty price tag with more screens than a commercial jetliner including an optional passenger display, a great infotainment experience, a 19-speaker McIntosh stereo system, soft supple Nappa leather, and quality materials that would have never been found in a domestic product even 10 years ago. It’s also vastly better than anything Ford and GM is doing with their interiors right now. The 4xe is also equipped with just about every safety feature and driving aid you’d ever need, there’s lots of room for 5, and the cargo area is enormous.

Most of that clunky driving behavior happens at lower city speeds but hit the highway or a nice farm road and the power is immediate and plentiful. Turbo lag is masked by the electric motor and passing slower traffic is effortless. The suspension also maintains good body control though I felt the ride was a bit on the stiff side. 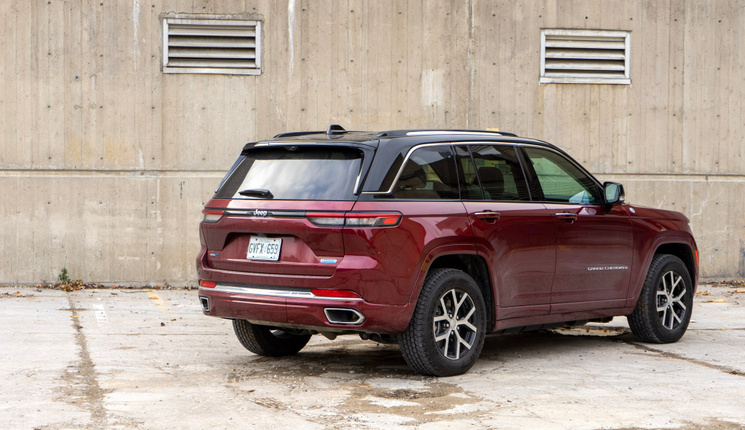 All that’s good about the regular Grand Cherokee carries over to the 4xe, except you have much more power and you’ll routinely score under 9L/100 km even without charging it. If you do plug it in regularly that number will drop drastically.

The biggest issue here is that the regular Grand Cherokee offers better value and a more refined driving experience, and it would be the one I’d lean more toward if it was my money. If, however, you value the extra efficiency and can take full advantage of the electric-only drive mode the Grand Cherokee 4xe is a very compelling buy.