Jaguar’s sporty kitten doesn’t fare very well against its main rivals, but that’s not the point.

Join the Conversation (0)
I’m going to come out and say this: to my eyes, the Jaguar F-Type is the most beautiful new car currently on sale. But this isn’t a beauty contest. It’s the automotive industry, a world where the product needs to punch hard on multiple levels. At the end of the day, a car needs to sell.

Jaguar’s F-Type is an interesting automobile. It’s about the same price as a Porsche 911 yet it doesn’t quite match its level of performance and sophistication. It’s also a two-door, two-seat coupe, not the kind of model that keeps a car company financially afloat.

And when comparing the F-Type’s 0-100 km/h acceleration times with other sports cars on the market, it’s not necessarily quicker than even machines costing half its price.

The flamboyant green example you’re seeing in these images had a sticker price of $119,150, including freight. For that kind of money, you could have two Ford Mustang GTs, or a BMW M3 with enough money left over to buy a Nissan Versa, or a well-equipped, seven-passenger Cadillac Escalade. On paper then, the Jaguar F-Type doesn’t make sense.

Until you drive it. 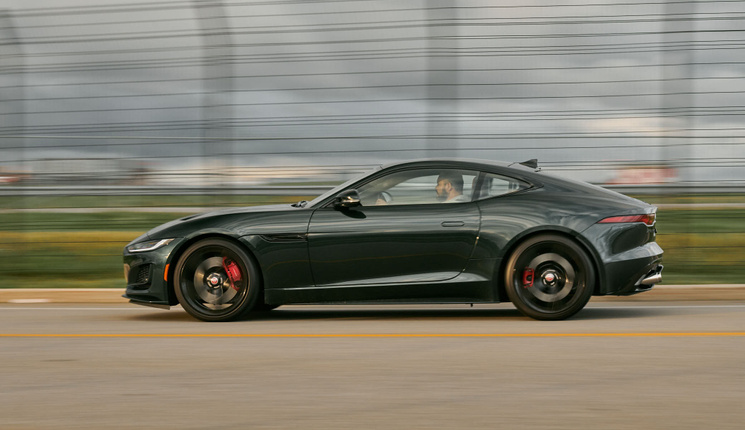 Character Comes at a Price

Today’s sports cars are very good at putting down numbers, but very few of them manage to stir the soul.

I own a first-generation BMW MINI Cooper. Many people ask me why on Earth I purchased such an underpowered car when I have the opportunity of driving all manner of performance machines on the market. My MINI isn’t even an S performance model. It’s a base Cooper, with a few modifications on it, cranking out about 140 horsepower. By today’s standards, it’s dead slow.

Yet, it’s the car I mostly prefer driving. Heck, I once had a 617-horsepower BMW M5 Competition press unit parked in my driveway, but I still preferred driving my MINI. My neighbors thought I was insane.

The reason I love that MINI so much is because it has character. There’s a tangible connection to the road through its steering wheel, pedals, suspension, and transmission. It creates an emotional connection. Many new cars have lost this. But the F-Type has not. 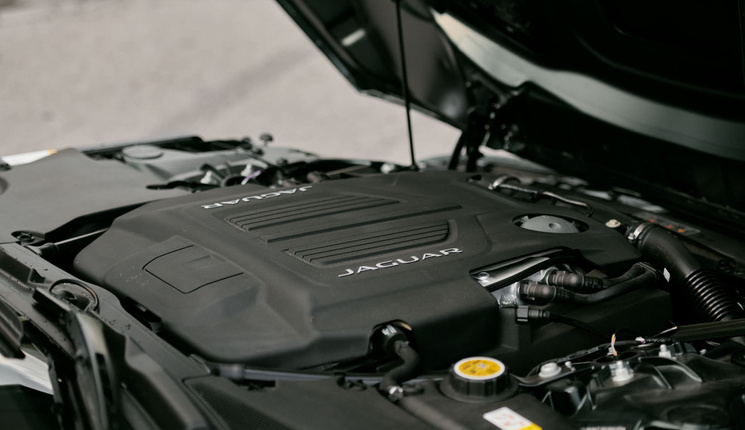 Fire-up the F-Type R-Dynamic’s supercharged 5.0-liter V8, and it emits a ferocious snarl as if being bothered from being woken up. This kitten instantly tells you it’s got a temper, forcing you to respect it before it has even begun moving.

You sit low in an F-Type, and far back towards the rear of the car, as if sitting on top of the rear axle. That’s because you are. It’s the kind of configuration that has made up some of the best thoroughbred performance machines in history.

As you look ahead over the long hood that curves downwards towards the tarmac, two climate control vents automatically move their way out of the top part of the dashboard. They retract with the same kind of controlled precision as a pair of afterburner nozzles on an F18 fighter plane. The heat is on. 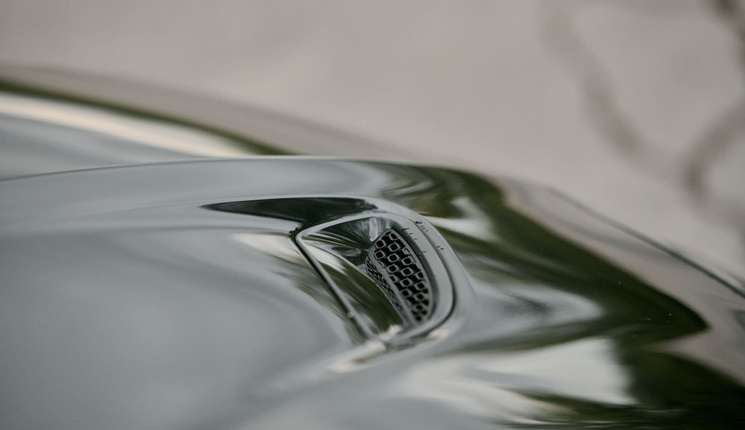 There’s nothing subtle about a V8-powered Jag. Sure, the F-Type allows you to tone down its exhausts and set it to more casual Comfort setting. In this mode, it’s like driving any luxury grand tourer: smooth, quiet, refined and not particularly vocal. As a matter of fact, it’s quite impressive how Jaguar managed to tune a “boring” mode in something that is anything but a boring machine.

But looking at your reflection as you drive in front of a glass building instantly reminds you that you’re driving something exciting. The F-Type gets all the attention. People stare, smile, nod with excitement. The color British Racing Green was invented for this car.

Meanwhile, the F-Type’s snug cabin proved to be surprisingly roomy for a tall driver such as myself, with thick and wide leather thrones adjustable in a wide range of settings, including a cooling feature which made driving during a hot summer’s day a bit more comfortable. The large glass roof was a welcome touch, but I did wish it could open, at least just a bit. 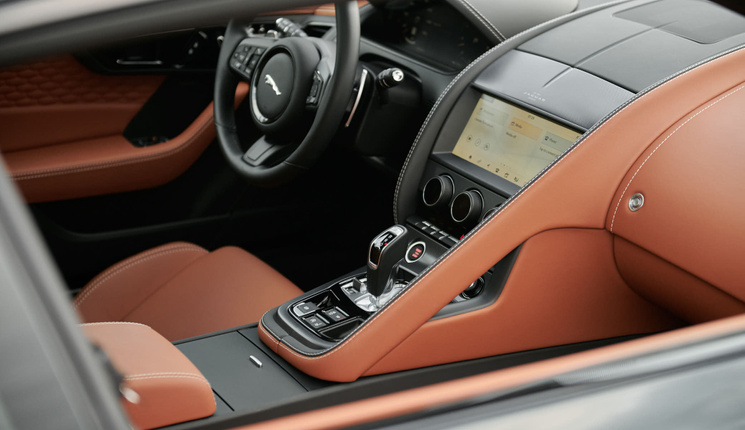 Overall ergonomics in an F-Type are good, but some controls can prove finicky, notably in the infotainment screen, which hasn’t changed much since the car was first released back in 2014. Icons are tiny, the interface is laggy and the graphics are dated. Nevertheless, this feline quickly connected wirelessly to Android Auto, which was neat.

Hit the Mountains and Make Some Noise

After leaving the city, I headed towards some of my favorite country roads, in the Eastern Townships region, bordering the Quebec/Vermont boarder. Over there, the pavement is clean, the curves are plenty and the mountains amplify the decibels emitted from this rambunctious coupe.

That’s when I activated the F-Type’s Race Program setting. I also made sure to open its quad exhaust pipes by way of a button on the center console. The car instantly yelped back as if telling me it was ready to attack. 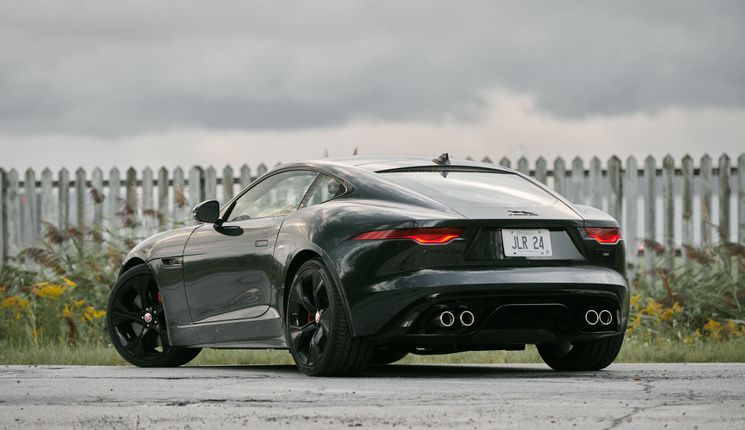 Drop a few gears using the eight-speed ZF transmission’s paddle shifters, and this Jag spits out some exhaust burbles, as if unpleasantly digesting its last meal. The F-Type sounds mean and mechanical; a unique soundtrack that even the best American V8s can’t replicate.

Hit the throttle and the car pounces forward with haste. That V8 is linear, with very little supercharger whine. It’s all exhaust note from there on, screaming its way to its 6,500-rpm redline with one of the most linear torque curves I’ve ever sampled in a sports car. Jaguar Land Rover’s AJ133 V8, which has been in production since 2009 was still properly adequate for the task at hand. With 444-horsepower and 428 lb-ft of torque on tap, it sounded as if it was tuned by God himself.

The added all-wheel drive system (optional) on my tester meant the F-Type never once flinched on the tarmac. No matter how hard I launched it or how aggressively I entered a corner, the car was always glued to the ground, further increasing my level of confidence behind the wheel. As the speed climbed, the sight of the protruding rear wing in the rearview mirror only added to what was already an exhilarating experience. This car is hard drugs. 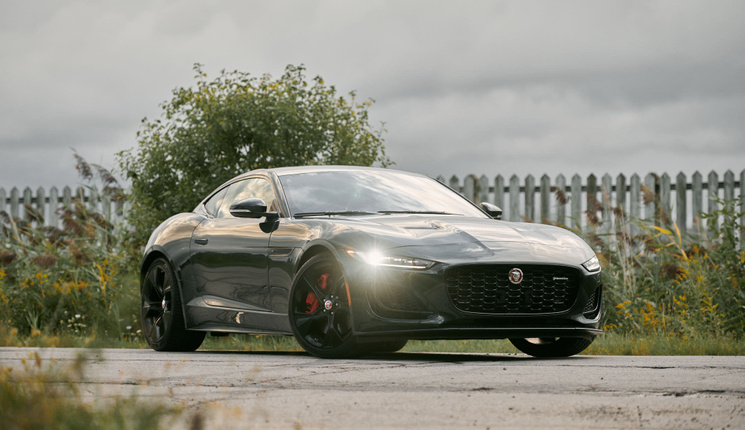 Walking out of the F-Type after a long drive into the countryside, I made sure to look back at the machine that had rewired my soul. It was a beautiful sight, with its elegantly slopped roofline, wide hips, and stubby rear end. Its proportions are just right, making a 911 appear like some sort of an obese pancake next to it.

After the drive, the Porsche was definitely not on my mind. Nor was the fact that the F-Type is too expensive for what it is. All I knew was my heart was still thumping and that I needed a Jaguar F-Type in my life. There’s no price for that feeling.