Join the Conversation (0)
MARKHAM, Ont. – It may be a bit of an overstatement to say that Honda’s fortunes in North America rise and fall with the compact CR-V crossover, but only slightly.

To wit, the fifth-generation model, which dates to 2016, remains an incredibly strong seller with 156,482 sold through Aug. 31 making it the bestselling Honda in the U.S. by more than 56,000 over the second-place Accord sedan.

For 2023, the CR-V debuts its sixth-generation model, delivering a fresh design, more technology and, for the first time in Canada, a gas hybrid model. 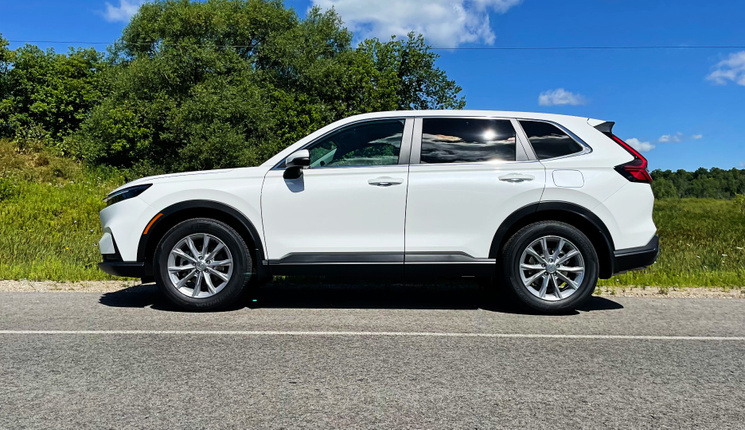 Dimensionally, the ’23 is longer (+68.6 mm), with a wider track (+10.1 mm) and a longer wheelbase (+40.6 mm) than the outgoing model. Torsional stiffness has also been increased by 15 percent for improved ride and handling, according to Honda.

The dash to axle ratio has been increased significantly with a longer hood, and an A-pillar (windshield) that has been moved 119.4 mm rearward. The A-pillar has also been pushed out by 71.1 mm and lowered by 35.5 mm. Another notable change is the introduction of door-mounted side mirrors which, along with the repositioned A-pillar, is designed to improve outward visibility. 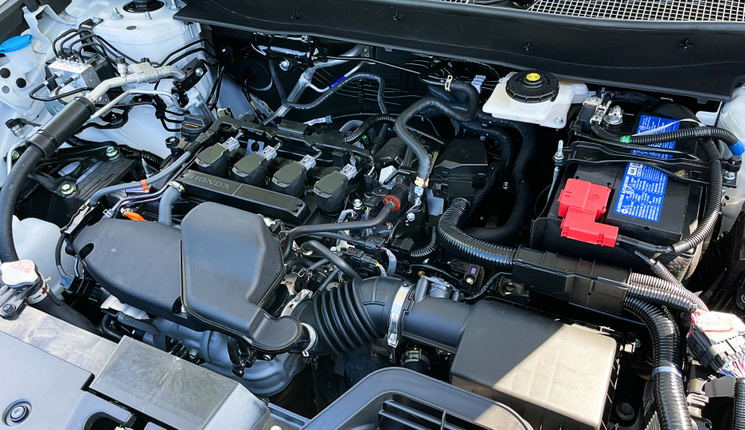 Mechanically, new CR-V gas models are powered by a 1.5-litre turbocharged four-cylinder engine that has been updated to reduce noise and vibration versus the 1.5 unit used in the outgoing model. The engine also makes use of a new high-efficiency and high-response turbocharger designed to help maintain peak power output over a broader rpm range. Output remains the same as the outgoing CR-V, with 190 horsepower and 179 lb-ft. of torque. Peak torque (1,700 – 5,000 rpm) now arrives 300 rpm sooner.

As it was with the departing model, the 1.5 turbo is paired with a continuously variable transmission (CVT), that Honda has tweaked to reduce noise and vibration. The CVT also features Step-Shift programming that simulates gear shifts at full throttle. All CR-V models come with standard all-wheel drive (AWD), except for the LX, where it’s optional. The system has been updated so that it can now send up to 50 percent of engine torque to the rear wheels.

The top-level Touring trim is where the gas hybrid resides. Sold in Canada for the first time – a prior generation hybrid was sold in the U.S. – the CR-V Hybrid’s powertrain is comprised of a two-motor hybrid-electric system that’s paired with a 2.0-litre Atkinson cycle four-cylinder engine. Total system output is rated at 204 horsepower and 247 lb-ft. of torque. 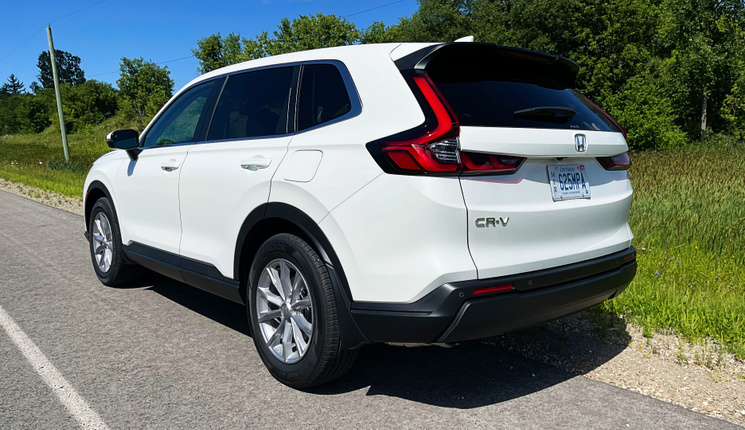 The cabin has been completely remade and bears a striking resemblance to that of the 11th generation Civic, as far as the dashboard and console layouts are concerned. Items borrowed from the Civic include a metal honeycomb mesh panel that crosses the dash and covers the air vents. 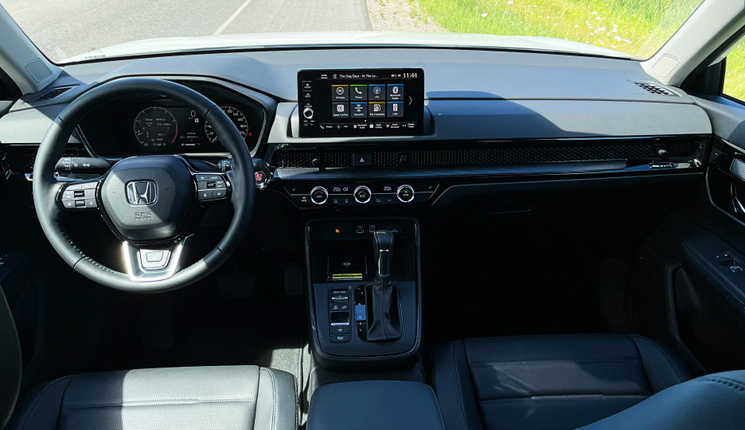 The dashtop-mounted 7-inch multimedia touchscreen and 7-inch digital instrument cluster should also look familiar to new Civic owners. Of note, the EX-L and Touring grades come with a standard 9-inch touchscreen and wireless smartphone charging, and both units come with Apple CarPlay and Android Auto. Other noteworthy cabin features include a multimedia volume knob and a traditional gear shift lever.

In terms of space and convenience, the ’23 CR-V has 15.2 mm more rear-seat legroom, a 9-litre centre console storage bin, and 2,166 litres of cargo space with the rear seatbacks folded down. When they’re upright, 1,028 litres are available which is the most space behind the second row in CR-V history. With LX, Sport and EX-L models, the load floor can be lowered to expand space behind the second row to 1,112.8 litres.

A few caveats before diving into my impressions. First, the pre-production unit I drove is an EX-L model. Second, I only had about two hours to drive it, gather my impressions and take some photos. Finally, I will be attending a CR-V media drive in California in mid-October, which will include the Hybrid Touring. I expect I’ll have a lot more to say then.

Despite not having much time with it, my initial impressions of the 2023 CR-V are favourable. Its refined road manners, quiet cabin and composed ride stand out. The 1.5 turbo four won’t blow anyone away, but it offers a decent amount of thrust if you lean on it, and while it can get a bit buzzy, it feels well suited to serve as a daily driver. I’m not a fan of CVTs in general, but the CR-V’s unit didn’t feel too rubber-bandy and wasn’t too noisy, both pluses in my book. 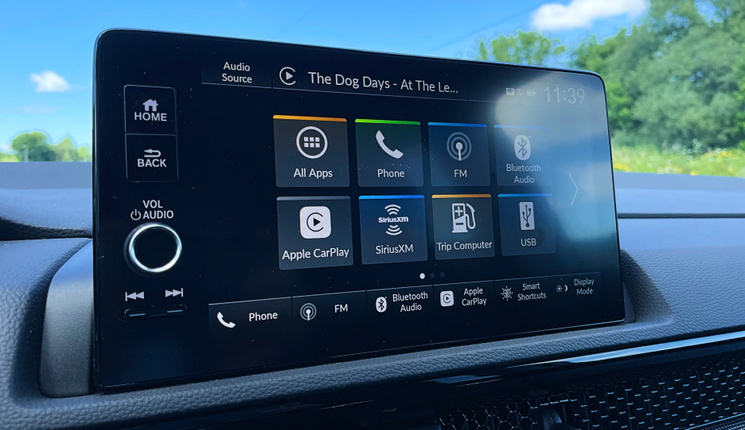 On the inside, I’m a big fan of the CR-V’s Civic-like design and amenities. The standard 7-inch and available 9-inch multimedia touchscreens aren’t the prettiest, but they are certainly brighter than previous units and the user interface has been improved.

Other positives include the pin-sharp 7-inch digital instrument cluster and metal honeycomb grille that covers the vents and neatly bisects the dashboard. Many thanks also to Honda designers for retaining the stereo volume knob and traditional gear shift lever. Some solutions just work better and that is true in these instances. More interior space and a more robust suite of standard Honda Sensing safety kit are also worth mentioning. 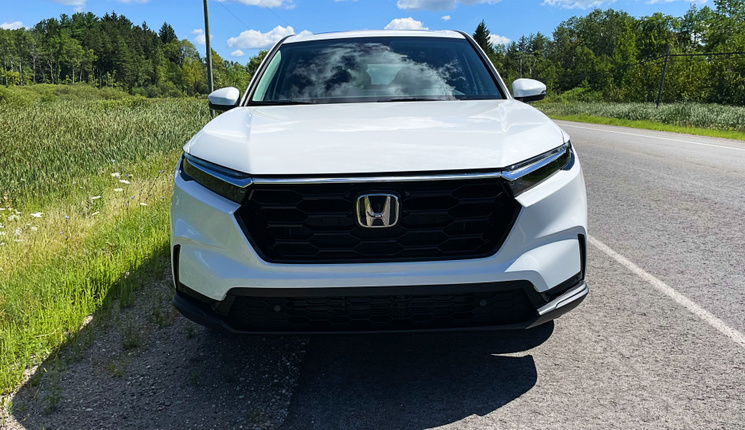 In sum, the 2023 CR-V feels like a case study for a philosophy of continuous improvement. While there is a lot of new here, especially in the case of the hybrid, a lot of these changes feel evolutionary and, in some cases, were previewed with the Civic. Taken together, I think they work well, but I would like to spend more time with the car to gain a better of understanding of how they all fit together.

With that said, the CR-V is Honda’s bread and butter, especially in North America, and nothing on offer here is likely to change that. This car is engineered to lead the sales charts, and with a fresh design, more tech and a hybrid on offer, the CR-V should remain Honda’s sales champ.

The 2023 Honda CR-V goes on sale across Canada this fall.