Join the Conversation (0)
I barely had any time with the 2023 Civic Type R (CTR). After screwing up the dates on my packed calendar I was a day late picking it up. I pleaded with Honda and luckily they agreed to extend my test drive for one more day.

I can’t say I loved the last generation’s styling. But I grew to like it more as time passed, especially in Boost blue. There was no such question about how it drove. The car felt special, powerful, and exciting. It was affordable speed, in limited numbers and a mandatory manual meant it wasn’t for everyone. The last Type R was also a usable, practical car with reasonable fuel economy and Honda’s proven reliability to back you up. It was almost the type of car I would buy with my own money. Almost

Because as much as I liked it, there was a part of me that felt uncomfortable climbing in and out of Honda’s version of a Gundam robot. I liked the styling from a distance, but not as much while strapping my son into his child seat. Maybe I’ve just been wearing my dad hat for too long. 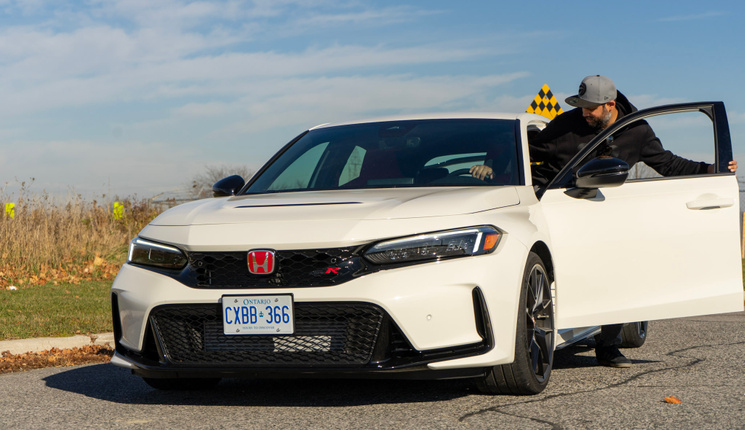 Walking up to the new one in classic Championship White, all that craziness is gone. Like the Civic Hatchback it’s based on, the CTR’s lines are clean and flowing. The fins and spikes are gone. So are the fake vents. The spoiler is still big but it’s been toned down and doesn’t block your view out the back anymore.

Fenders have been puffed out, the front and rear track are wider and any vents you do see are functional. Tires are 265 width all around, probably the widest I’ve ever seen on Civic. And Honda did the right thing by going down to a 19-inch wheel. My car was fitted with Michelin Pilot Sport 4S rubber despite the chillier weather and I was thankful to experience this car on proper summer tires.

Pushing those meaty hoops into the ground is Honda’s understeer-killing dual-axis front strut and multilink rear suspension. It’s been carried over but with retuned geometry. Sheer mechanical grip is implied before you even get in. 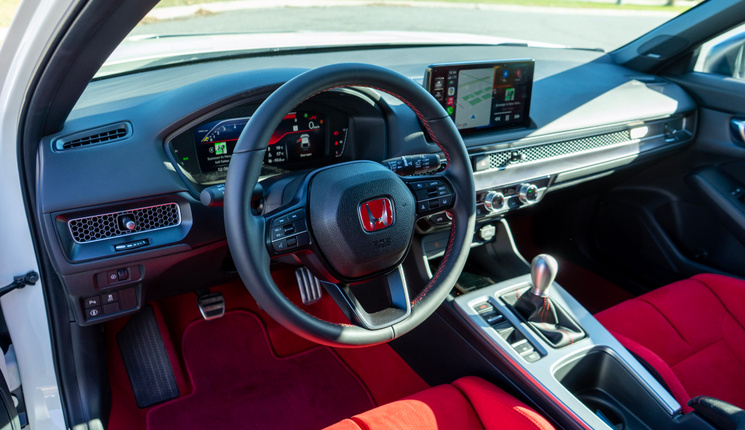 To quell any issues with cooling, the front openings are larger, and there’s a larger radiator and a larger fan. A vented aluminum hood helps release even more heat. Honda says that even under “extreme driving” performance will remain “optimal.”

Inside, red upholstery is your only choice but only for the front seats. The carpets are bright red too and they look great. The seats are very supportive and also very comfortable with large bolsters that are flexible enough to accommodate bigger people. Space inside is generous. I had a ton of knee room sitting behind myself, though at 6 feet tall, the hatchback roofline does intrude on rear seat headroom. Cargo space is abundant even for hatchback. A VW Golf’s boot seems like it’s half the size. 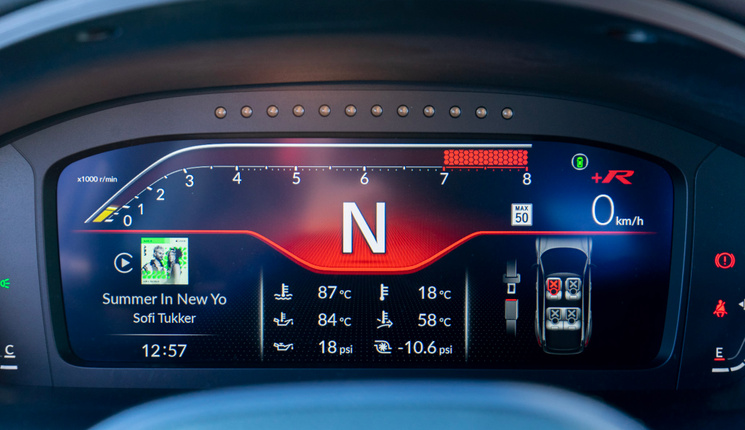 Settle into the driver’s seat and it feels lower than I remember. The driving position is perfect, and visibility is excellent thanks to lots of glass and a low cowl. Honda’s digital gauge cluster is simple and lacks flair but shows everything you need it to. Press the “R” drive mode button and an awesome new Formula 1-inspired cluster loads, complete with critical information you might need on a racetrack like coolant, oil, and transmission temperatures. There’s a new Honda LogR app that can display even more drivetrain data but it’s also a performance logger, with a stopwatch, g-meter, and a unique scoring system designed to help improve your lap times.

It’s a familiar cabin, with everything at hand. But the only thing I wanted to reach for was the cold aluminum shift knob, so perfectly shaped and crafted. The feel of it in your palms is one of those things that put you more in tune with the car.

When you start the engine the first thing you notice is a growl that wasn’t there before. The exhaust has a straight-through design and now has a valve that opens up at high rpms and depending on the drive mode. People asked for more sound (count me in that pile) and Honda answered, but it still isn’t as obnoxious as something like a Hyundai Elantra N.

The 2-litre turbocharged engine is the most powerful fitted to a CTR or any Honda badged product so far. There’s 315 hp and 310 lb-ft of torque and it all gets sent to the front wheels via a helical limited-slip differential. It’s a lot of power but Honda’s official numbers still feel underrated. Push the throttle down even 50 per cent and the Type R will rocket down the road pushing your torso firmly into the seat. It’s not just quick from a dig, even at highway speeds the digital speedometer has to skip multiple numbers to keep up with the acceleration. At lower revs it feels noticeably punchier than it was before even though the power increase is incremental. 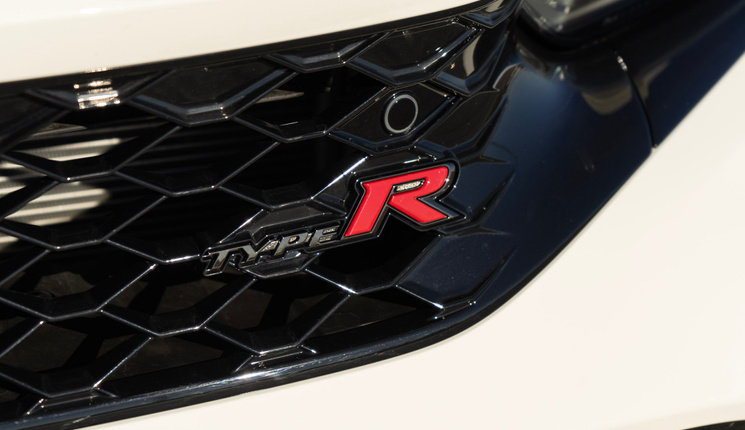 I had to keep reminding myself I was in a Civic because compared to the Civic Si that I drove last year, the CTR feels like it has four extra cylinders. But the last thing this car should be judged on is straight-line speed because its chassis is where the real magic happens.

For such a powerful front-driver, the CTR keeps it noise pointed dead ahead even when flooring it. You can thank that trick dual-axis front suspension. It feels buttoned down and super stable at speed and you get lots of tactile sensations from the seats, steering, gear lever, even the tire noise. The slick 6-speed shifter has been improved with an optimized shift gate pattern, and more rigid gear lever. There’s a lighter flywheel too, and it just feels more responsive now. The gearbox in this car was one of the best in the world and it still is with precise mechanical-feeling throws that require just the right amount of effort to slot into gear. 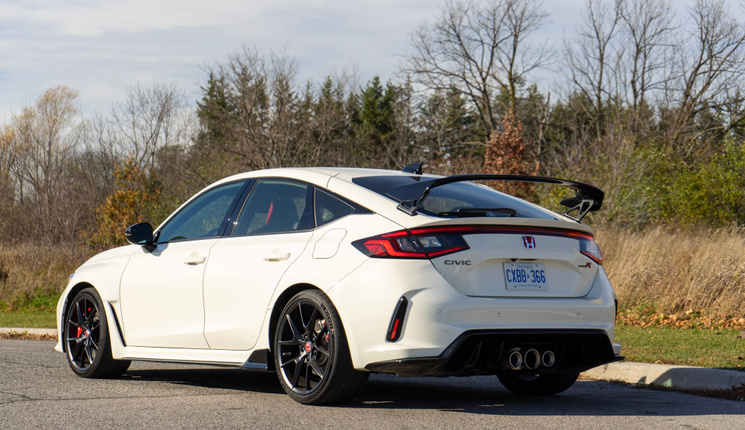 Grip from the fat Michelins is astounding and understeer only rears its head when entering a corner too hot. But a quick lift of the throttle pedal brings the nose in right away. Thanks to that new “Individual” drive mode, I set the damping to “Comfort”, the steering to “Sport”, and everything else to “R”. The ride in “R” mode is way too bouncy and uncomfortable for most streets around the Toronto area, and it feels like a setting best reserved for the racetrack.

Like the last one, this new CTR is a car that you get familiar with in a matter of minutes. It’s like meeting your best friend again after a long time and picking up right where you left off. When you want it to be, the CTR is one of the most focused and exhilarating cars to drive.

Put it into comfort and it settles down. The exhaust growl goes away, and the ride smooths out in an instant. From the driver’s seat it’s also easy to forget that this isn’t some niche 2-seat sports coupe. The CTR is a big, family-friendly hatchback, with cargo space to spare and room for 5. It’s one of the very few cars that can provide such a visceral experience but also remain so usable and daily drivable. 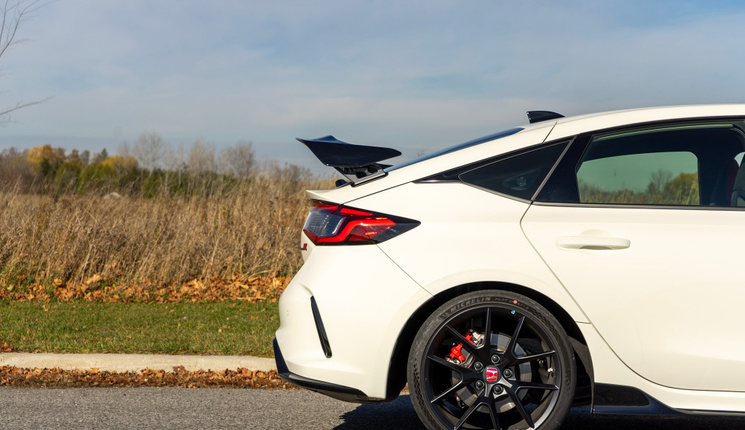 If I have one complaint, it’s the $50,050 price tag, and that’s before any dealer markups. Regardless, Honda tells me that all the CTRs this year are spoken for. So if you want one you’re going to have to get in line for the 2024. An Elantra N starts at $37,199 and is a bargain for what you get, while a GR Corolla will start at $45,490, and has been getting rave reviews from everyone that gets their hands on it. But to fans of Civic nation and the Type R badge, none of that matters.

The 2023 CTR is undoubtedly excellent and one the best cars I’ve driven this year, and I say that even with such little time behind the wheel. In the hot hatch segment Honda has raised the bar yet again.