The supertruck has landed.

Join the Conversation (1)
Morristown, Southwest Extreme Triangle, AZ – One could call it crass Americanism in a four-ton-plus package, or GM’s most advanced EV technology showcase to date. You could easily claim it as the company’s quickest yet most adventurous off-road vehicle ever, and once again be accurate at both extremes.

Or you could simply call the 2023 GMC Hummer EV pickup a supertruck, as GM does, because it can somehow do it all. Even including resurrecting the dormant Hummer brand, taking its reputation for hulking off-road bruisers unconcerned with a voracious gasoline appetite, and transforming it into a GMC sub-brand that suddenly uses no gas whatsoever. 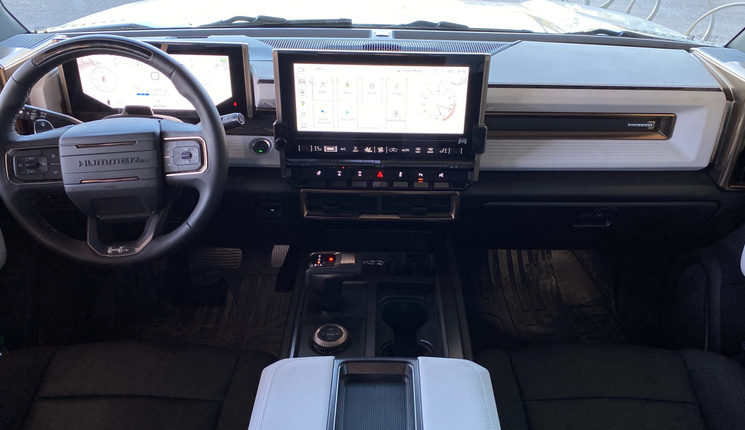 The Hummer EV has not only became GM’s first electric pickup, but it has become a pricey test bed of off-road technologies plus straight-line hooliganism with its Watts to Freedom (WTF) launch mode, and all with a new rebellious mix of fun and brashness meant to be the EV for pickup owners who previously didn’t trust EVs.

The Hummer brand, which GM discontinued as part of its Chapter 11 filing and corporate restructuring in 2009, has now re-emerged as a premium electric sub-brand of GMC, slotting above its Denali vehicles at new six-figure price and performance heights. American Hummer buyers received the first Hummer EV Edition 1 models in December 2021, starting at US$110,295, but it will be December this year when 2023 Edition 1 models are expected to land in Canada.

No official Canadian prices have been announced at time of writing, but a related Google Canada search has popped up strangely unattributed Edition 1 prices of ‘CA$125,898,’ with future base Hummer EV 2 models starting at C$88,898, then up from there for the 2X (C$104,898) to the 3X at C$119,398. Take these all with a grain of salt, but they do align roughly with similar pricing steps announced now between the U.S. versions, with the priciest models slated for production first.

The fully loaded Edition 1 versions we sampled just outside Phoenix was packed with all the available off-road toys, including four-wheel steering that enables the tires to turn at opposing angles to tighten the turning circle to subcompact Chevy Sonic levels. The available CrabWalk mode allows for all four tires to turn in the same direction at low speeds for diagonal crab-like movement.

It seemed like a gimmick when we tried it back and forth in a paved parking lot, but less so when a colleague happened to park a little too close to the edge of a trail at the top of a steep hill just in front of us. The sideways tilting pickup likely could have steered out of the predicament normally, but CrabWalk mode helped him immediately thrust the super wide and heavy truck’s rear end out of harm’s way at the same time as the front.

The sheer hulking size of the Hummer EV deserves special mention here, as it managed to dwarf the many full-size pickups we passed on the way to and from the off-road trails, including a new Ford F-150 Raptor, whose driver sat slightly lower than in this 5.5 metre long and 2.38 metre-wide mega-pickup. The Hummer EV weighs a total of 4,110 kg (9,063 pounds), compared to an electric F-150 Lightning’s curb weight of 6,590 lb with the larger extended-range 131 kWh battery.

This massive weight makes the Hummer’s dynamic abilities both off-road and on pavement even more of an engineering marvel. The air suspension’s beefy hydraulics are clearly visible behind the Hummer’s massive wheels in all their industrial strength glory, able to raise and lower its body and colossal 1,325 kg (2,923 lb) battery to four different levels, giving the Hummer up to 40.4 cm (15.9 inches) of ground clearance in full-on Extract mode. 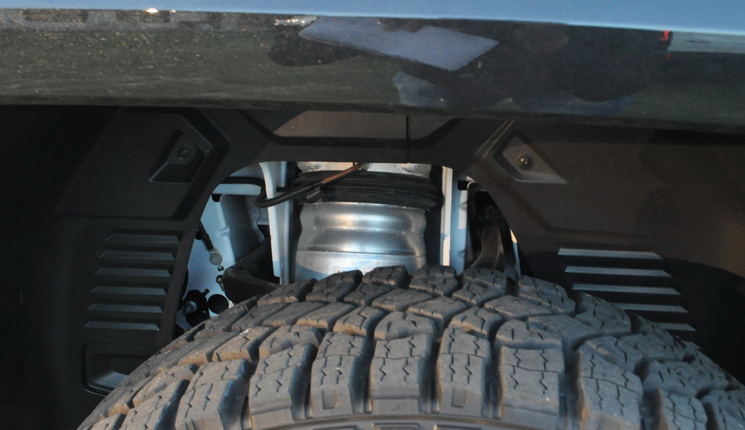 So yes, that usable 205 kWh battery alone weighs as much as an entire Honda Civic or Mazda3.

Luckily that low-mounted Ultium battery has serious off-road protection, with five skid plates, two underbody shields and rock sliders that came in handy on the off-road trails we tackled in the cactus-laden Arizona desert. GM bravely took these expensive supertrucks into tight areas with large boulders and sharp rocks, areas where that battery protection was much appreciated in one particular section that put a slight dent in the passenger sidestep of our Hummer. There was also just one flat tire in the group throughout a full day of off-roading.

To help avoid such dangers, the Hummer offers an UltraVision system with 18 camera angles, including underbody ones that can even be shown in a split screen with front and rear views combined with an overhead view, which we found most helpful off-road as a virtual spotter. These underbody cameras can even wash themselves clear of debris or dust, and are positioned in a way to help protect them from damage. 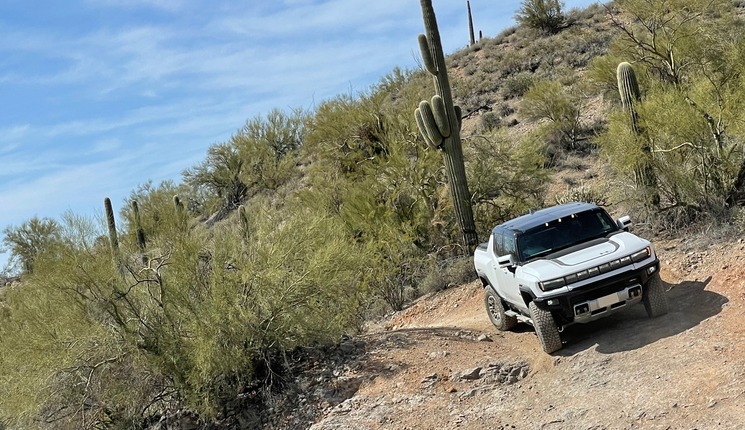 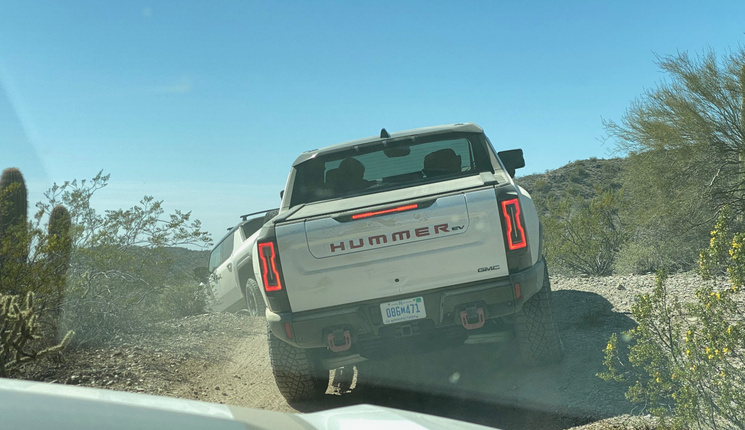 Prior to taking the Hummer off-road, we also had a chance to experience the Hummer’s famed Watts to Freedom acceleration mode. Essentially a launch control function, it requires a double tap on the traction control button, before it hunkers down and launches the beast from rest to 60 mph (96 km/h) in a GM-estimated three seconds flat – an incredible figure for any vehicle, but an insane one for a truck this large and heavy. And it felt like a 3.0-second car from the inside.

Power is an even 1,000 hp and 1,200 lb-ft of torque from the triple motor setup (one in front, two in the rear). The full 24 module double-stacked Ultium battery in the fully loaded Edition 1 Hummer EV pickup can provide a total range up to 529 km, says GM, a figure that was also indicated on the dash at full charge.

There will also be an SUV version of the Hummer EV coming as a 2024 model, which is slated to be shown in full production form in 2023, though its top version will be limited to a 20 pack module, meaning it will “only” top out at 853 hp, and roughly 482 km of range.

On the road, the Edition 1 pickup feels quick, but not amazingly quick, even when accelerating hard onto highway onramps, which you’d think would be more impressive than from a start, because all that mass is already moving at that point. With no sport mode, the face-ripping acceleration doesn’t come nearly as often as one would expect, or hope. It just feels more like a four or five second car, versus a three second one, sadly.

We went off the prescribed drive route in the Hummer EV to put this largest Ultium pack to the quick charging test. We were impressed at how the native Navi system not only told us where the nearest charging stations were, but also noted them as Fast or Very Fast – which is a vital criteria on a road trip when you have a massive 205 kWh battery to charge up on the go.

To that end, the Hummer is one of the few EVs who does pre-conditioning flawlessly to help speed up quick charging: it will automatically warm up the battery when selecting a DC fast charger to help achieve as close to its max 350 kW charge rate as possible, or there’s a manual way to turn on preconditioning, if you know where you’re going and don’t want to put it in the Navi (or the quick charger is not listed yet on the over-the-air updateable maps). 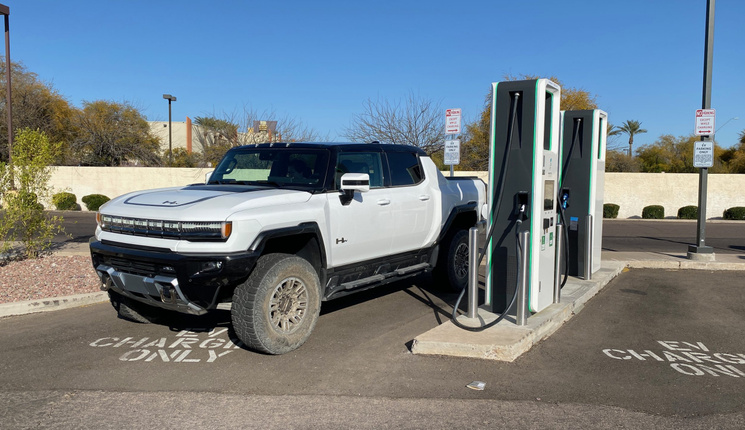 Unfortunately, the Navi system doesn’t give you the specific charging speed of the nearby chargers in question. So while the Electrify America station on our route was listed as the fastest one in the area, when we pulled in we realized that it had only 150 kilowatt chargers, which didn’t have the capability to demonstrate the Hummer’s 350 kW max charging speeds. But almost as soon as we pulled in, with a 24 per cent charge, the Hummer began pulling 143kW, and stayed right at the charger’s max charge speed like the Hummer was barely breaking a sweat, replenishing electrons at a rate of 383 km per hour.

This is much slower than the 160 km possible in 10 minutes that GM quotes on a 350kW DC fast charger, however. And if the dash rate was accurate, this would mean adding 160 km would take closer to 30 minutes on the more common but slower 150kW DC quick chargers. This was in near ideal 25 degree Celsius temperatures as well, so it will be something to test again on a proper charger with more time on home soil.

The playful side of the Hummer’s personality hinted at by WTF mode can also be seen in the many little Easter egg design details in and around the vehicle. Whimsical touches like a little tiny Hummer on the base of the windshield, speaker grilles up front patterned to represent the moon’s surface, and a footprint integrated into the Bose speaker only on the driver’s side, a hat tip both to GM’s participation in building the next lunar rover and the Hummer EV as a moonshot jump into a new electric era for the company.

The fun continues with the Infinity roof, which consists of clear and impressively lightweight removable panels, which can then be stored in the massive power-operated front trunk to make it a sunshine-friendly convertible.

Overall the GMC Hummer EV is an unapologetically brash play for an EV meant to smash stereotypes of what electric vehicles are, and a high water technology mark in both off-road, on-road, and EV capabilities. There’s enough tech and features to talk about for days, but it’s perhaps the clearest four-wheel proof that this is indeed GM pushing its engineering boundaries as far as possible.