Genesis brings innovative luxury and tech to its first EV.

Join the Conversation (0)
Professional chefs and amateur cooks tend to like the Korean dish kimchi for its infinite versatility. Despite comprising the same basic ingredients, one can tweak the recipe to produce anything from traditional Korean pogi kimchi to ultra-fresh baechu geotjeori. There are literally hundreds of varieties, especially if one chooses to count regional differences around Namhan (and you should).

The world’s automakers play a similar game. Using the same basic platform for a variety of cars has long been a ticket to controlling costs but the practice has ramped up in this brave new world of electric vehicles. Genesis, an upstart luxury brand backed by the Hyundai Motor Group, uses the Electric Global Modular Platform (E-GMP) as a base for the 2023 GV60. If the name of that platform sounds vaguely familiar, it’s because these bones underpin the new Kia EV6 and Hyundai IONIQ 5, which also have headquarters in Seoul. As the first electric-only dedicated platform from this group, it’s ripe for customization to fit the personality of a particular brand.

Since the mission statement of Genesis is to bring heat to established luxury marques like Audi and BMW, the brand has stirred in a pinch of luxury trappings and unique exterior style with the latter employing a jaunty lightning bolt D-pillar flourish and paint names like Sao Paulo Lime or Hanauma Mint. Genesis also stirred a spicy dose of power into the E-GMP to cook up the GV60, with an amount of horsepower akin to firing a whole tablespoon of Korean chilies into your favourite kimchi recipe. 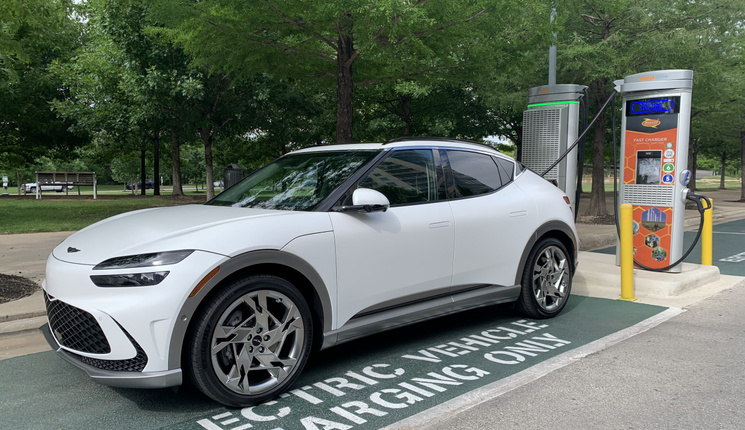 How much horsepower? Our test vehicle was a Performance AWD model, rated at a significant 429 horsepower and 446 lb.-ft of torque from its twin electric motors. That is entertaining in a small-footprint crossover but output can be raised to a sinus-clearing 483 horses and 516 lb.-ft of twist after thumbing the BOOST button located on the GV60’s steering wheel. This action permits the battery to temporarily force-feed more power into the electric motors, a trick that lasts for 10 seconds. Unlike some gasoline-powered vehicles which attempt a similar feat, there is no refractory period here. Hammer that button to your heart’s content (or until the battery runs out).

Speaking of, all Canadian versions of the 2023 GV60 are all-wheel drive and will be fitted with a 77.4kWh battery pack, good for 378 kilometres of range in Performance trim or 399 clicks in the slightly less-powerful Advanced model. Your author averaged an indicated 4.5km/kWh during a day’s drive deep in the heart of Texas, a mix of steady-state highway driving and regen-friendly heavy traffic (punctuated by the occasional foray into boost mode, natch). This suggests a real-world range of about 350 kilometres on a full charge. Not bad.

Capable of being force-fed electrons through ultra-fast chargers rated up to 350kW, the GV60 can potentially be charged from 10% to 80% in about 18 minutes. In the real world, the same trick will take 75 minutes at a 50kW Level 3 charger, or about 7 hours on a standard 240V Level 2 charger at home. 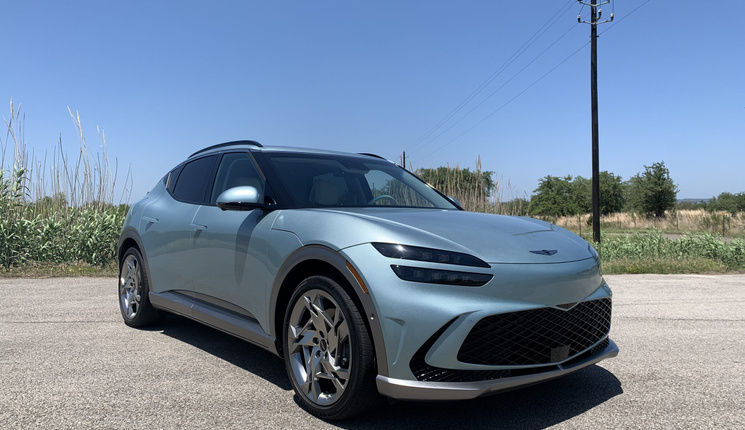 An ancillary benefit of placing a heavy (482 kg) battery pack underneath the floor of a vehicle is its propensity to improve the machine’s handling characteristics – even if the vehicle is not in a class that is traditionally thought of as sporty. The GV60 adds an element of athleticism to its crossover-style body not generally seen in similarly sized gas-powered vehicles, nor even its all-electric E-GMP brothers. An electronic limited-slip rear differential in the Performance trim manages to tuck in the rear of the car during spirited driving, while an electronically controlled suspension uses trick tech to read the road ahead and smooth out bumps. There’s even a Drift Mode buried in the GV60’s infotainment menu, permitting lurid slides at wholly legal speeds (our bed-wetting lawyers are braying at this author to state such driving should only take place on a closed course.) 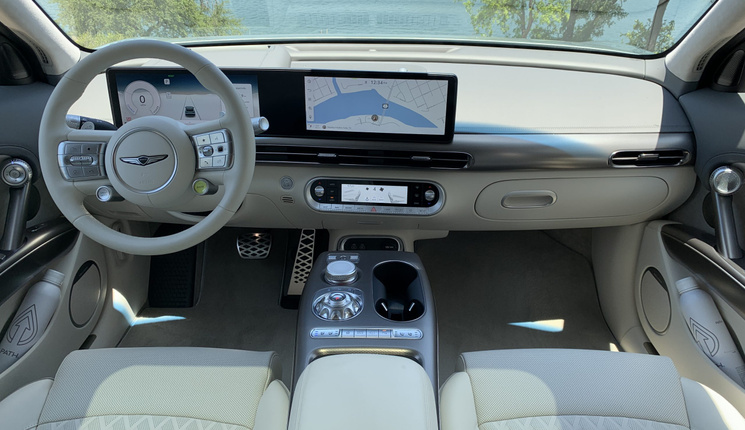 Like good kimchi, the GV60 differentiates itself from cars with similar ingredients. For starters, it makes better use of its interior space. A different E-GMP based machine was recently piloted by this 6’6” driver and he was dismayed to find an alarming lack of front headroom in that car. Not so in the GV60. Whether it’s a better seat design or more precise frame placement, this writer had no trouble fitting behind the wheel. Ditto for rear-seat accommodations in which my head neatly tucked into a divot behind the fixed sunroof as if I were using one of those perm machines in an old-school hair salon. Despite a footprint smaller than an Audi Q4 e-tron, this is a comfortable car. Materials are supple and well crafted, though some may feel there’s still room for improvement at this car’s near-$80,000 sticker. Obvious effort has been put into creative takes on everyday items like the door pulls and speaker grilles. Storage is ample in the rear and is appended by a mini frunk. Overall, it’s a stellar cabin. 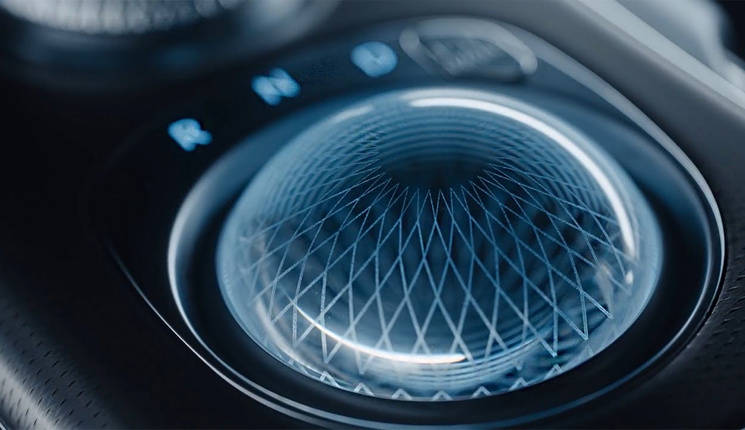 Stylish, too. Genesis is seemingly unafraid to take chances with its design, stuffing the GV60 interior with typical items like billboard-sized infotainment screens but also reaching for the moon by including a drawer-style glovebox and an attention-grabbing crystal ball shifter. The latter is unit which appears to be a crystal ball backlit by LEDs sitting stationary on the centre console but rotates 180-degrees to reveal a rotary gearshift lever upon starting the car. Genesis said this is a safety feature, since EVs are notoriously quiet and it can be difficult to tell if the thing is running. Your author dismissed this as marketing faff but changed his mind after a bystander remarked he’d like the feature since he wears hearing aids and visual cues are important to him (and, no, the man wasn’t at a Genesis plant), proving gimmicks can be successful when they’re smartly designed.

Another gee-whiz feature is the capability of the GV60 to use biometrics to unlock its doors and start the car. A camera, integrated into a leading edge of the rear side door, can read the face of the driver to pop the locks. Once aboard, resting one’s index finger on a smartphone-style fingerprint sensor starts the vehicle – no key required. Luddites with tinfoil hats will surely sneer but Genesis says the biometric information is stored locally, not in a cloud, helping quell fears of identity theft. Since the tech worked each time it was sampled, I give it a thumbs up. Uncle Walt can continue to start his car with a screwdriver if he wishes. 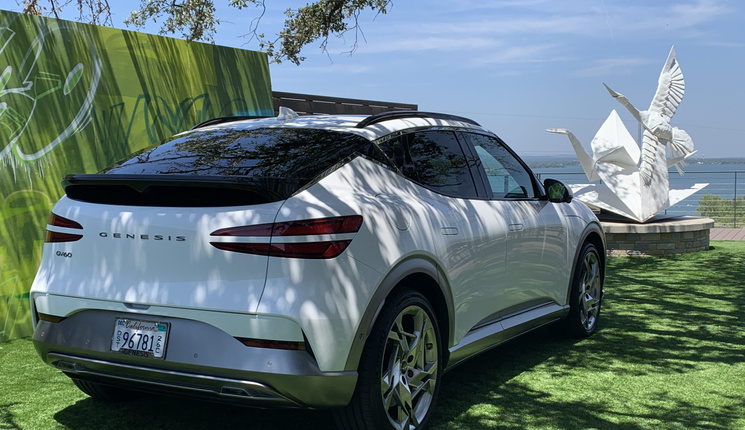 In Canada, the 2023 Genesis GV60 will start at $71,000 for the Advanced trim, rising by $8,000 for the Performance model which adds horsepower and drift mode plus more items at the expense of just 21 kilometres of range. Irritatingly, neither one has a rear wiper. Our advice? Get the Performance trim and its showoff bag of tricks. Even if one chooses not to play real-life Forza there’s a good chance this model’s excellent Bang & Olufsen sound system, the trick road-preview suspension, and better front seats will be enjoyed. The park-it-with-yer-keyfob feature is also a crowd-pleaser that’s worth the cash.

Like chefs who tweak the base recipe of a great kimchi to make their own standout dish, Genesis has worked the E-GMP platform to create an EV all its own with entertaining styling and a peppery amount of power. With cars like the GV60, we doubt this will be the brand’s last turn in the kitchen.