Athletic 3-row X7 gets a new face and the latest tech.

Join the Conversation (0)
As if the BMW X7 didn’t already have a recognizable face, what with the massive take on the traditional BMW kidney grille that adorns its front end, laser lights, and so on. For 2023 BMW has gone back to the drawing board.

The whole affair actually looks somewhat tailored back from the previous model; the grille is probably about the same size but somehow the new slimmer dual-tier headlight/DRL treatment makes the grille look somewhat less in-yer-face, especially when finished in gloss black and set against classy matte grey paint as seen here. It does light up as you approach, however, which is an especially cool effect at night. 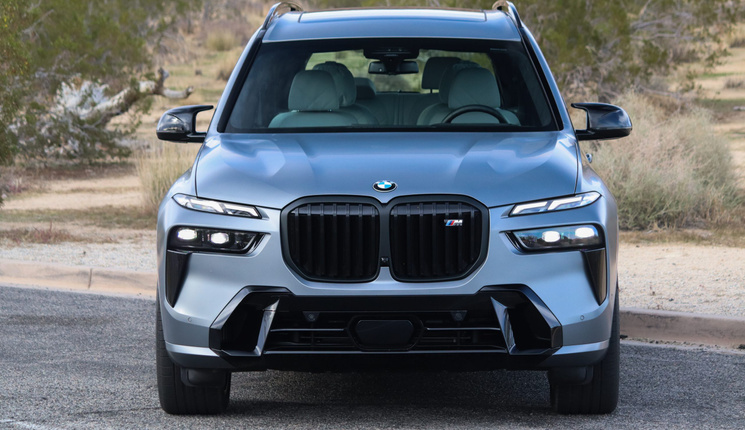 The headlights themselves sit below the DRLs perched atop the leading edge of the hood. While at first glance they look quite alien (and a bit like what Nissan’s done with the latest Rogue crossover), look a little closer and the way they’ve shaped the LED DRLs actually recalls other models in the line-up. So while there are some features that recall other BMWs, know that what you see here is not something that BMW plans on using on any other vehicles aside from the 7 Series as both that line and the X7 form part of the “luxury” arm of BMW’s line-up. While many will likely argue that a BMW is, as a rule, a luxury car, the X7 and its $108,500 starting price in Canada (that’s for the xDrive40i model; it increases to $129,000 on the M60i version seen here) puts it in an upper echelon.

In addition to the front end, other new styling touches include new wheel choices (which can run as high as 23 inches, a first from the BMW factory), as well as 3D-effect taillights connected by a glass-covered chrome bar. The result is a rear fascia that looks just a little lower profile than it did previously. The fat 275-section tires, meanwhile, help ground the image even further. Said rear fascia serves as a microcosm of what’s going on with the X7 in general, as it cuts a lither swathe through the legions of luxury three-row SUVs on the market today. 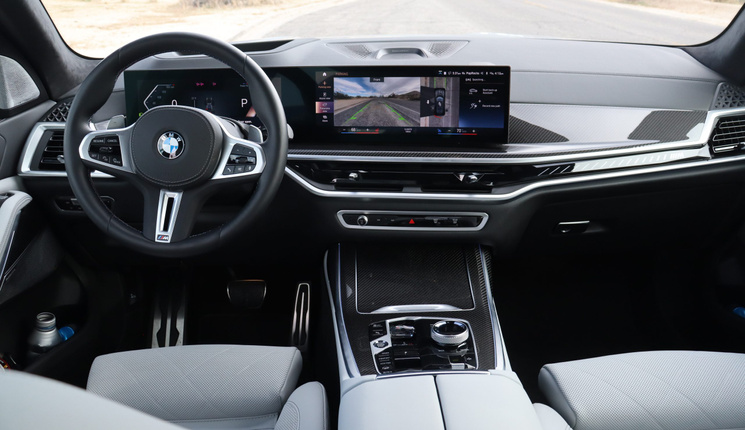 Inside, it comes as little surprise that the X7 comes with all the latest tech BMW has to offer. This is punctuated by the curved display which houses both your digital gauge cluster and infotainment screen.

Seen on the main display is BMW latest iDrive tech – iDrive 8 – and it’s faster and better-looking than before. It also sees its ambient lighting and display styles change depending on which of the various “MyModes” you’re in. Other neat new touches include a light bar bisecting a dash with either “M” or “X7” written thereon depending on which X7 trim you’re in.

The gauge cluster is your home for your speedometer, obviously, but it can be configured to display the new augmented reality (AR) navigation system. Basically, with AR you get a real-time image of the road ahead and when your next navigation instruction comes up, animated arrows on the screen help guide you through so there’s no need to crane your neck to see street signs any more. Other luxury touches include premium Bowers & Wilkins audio, heated and cooled cupholders and ultra-supple leather seating surfaces. 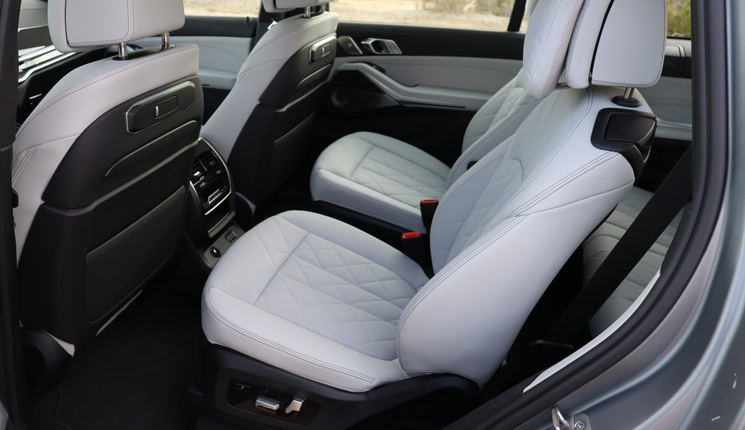 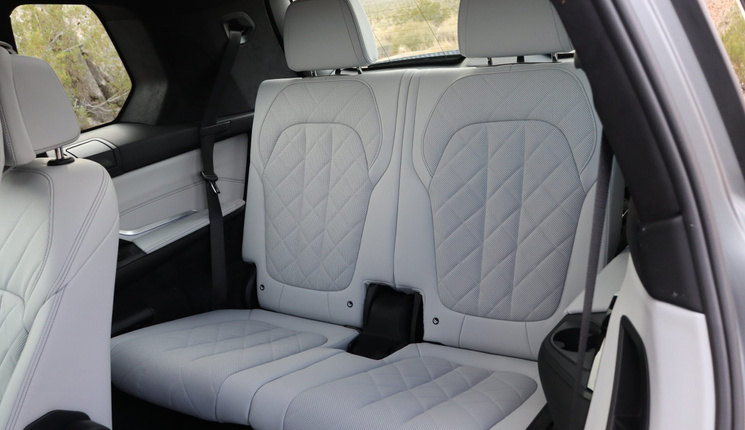 As far as seat comfort goes, there’s little doubt that the cushioning is right on par with the best in the biz. It softens your seat in all the right places and supports you as well – for the most part. The one thing I would have asked for is a larger bottom cushion with more thigh support. You sit fairly high in the X7, and the smallish cushion doesn’t do you any favours.

The second-row seat occupants are well taken care of; the roof is high so there’s plenty of headroom and the high seating position some drivers – myself included – don’t love is actually a boon for second-row occupants as it gives them a better view out. The third row is also fine; it’s not as spacious as something you might get in a Lincoln Navigator or Cadillac Escalade, but there’s a noticeable amount of additional space here than there was in the X5, which was BMW’s three-row SUV option before the X7 arrived. The second-row slides and tilts, but not to the degree where you could leave a child’s seat in there and still be able to access the third row without having to pass between the two seats. Max cargo room is rated at 2,560 litres and it’s made all that more accessible by the dual-tier tailgate that also helps keep your load in check. 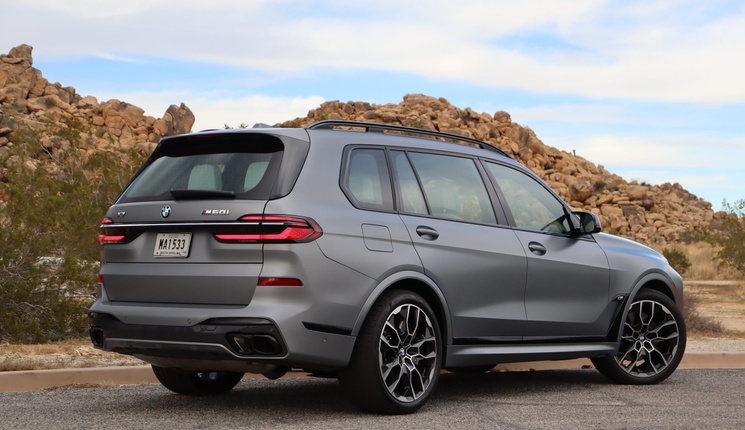 Power for this most potent M60i version comes from a 4.4-litre twin-turbo V8 with a 48V mild hybrid system to help aid with launch and low-stress cruising. It’s rated at 523 horsepower and 553 pound-feet of torque, which is a generous amount even for a vehicle that weighs nigh on 6,000 pounds. Peak power comes at 5,500 RPM, but the torque is the big thing here. It reaches its peak at 1,800 RPM, which means power gets put down lickety-split to the wheels through the eight-speed automatic.

To help through turns, the X7 gets what BMW calls Integral Active Steering which means the rear wheels swivel in the same direction as the fronts for stability at speed, and in the opposite direction of the fronts at low speeds to make tight inner-city manoeuvres and parking that much easier. I won’t say that the X7 “dances” through turns, necessarily, but through the kind of long sweepers that you’re likely to encounter on the way up the ski resort, this bruiser of an SUV is rock solid. Active roll control, meanwhile, ensures that tall roofline doesn’t cause the X7 to get too far out of shape. Hard to imagine a full-size SUV with 22” wheels handling itself like this, but there you have it.

There’s an Alpina XB7 version on the way that packs even more luxury into the package, but the M60i packs so much of a punch it’s hard to imagine it would have that much more to give. This new X7 is an über ‘ute, through and through.