Join the Conversation (1)
SEVILLE, Spain – To me, special edition cars, especially ones built to honour supercar nameplates such as the 2023 Audi R8 GT, are all about their rarity.

The last thing you want to encounter after dropping a small fortune to acquire one of these incredible machines is to pass another one on the highway or in a shopping mall parking lot. Or worse yet, discover one parked in a driveway a few doors down.

Audi Canada understands this niche supercar concern well, which is why those with the means will be relieved to learn that just 10 R8 GTs are bound for Canada, and only 333 are going to be available worldwide. 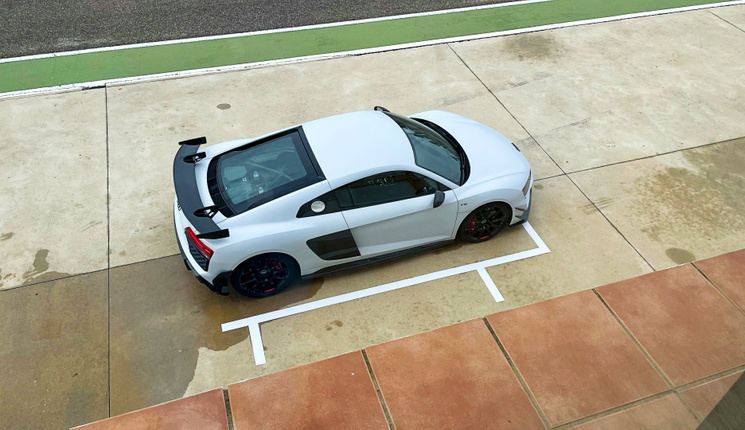 Two colours, Mythos black metallic and Daytona grey pearl, will be offered, so in the unlikely event you randomly run into one, there’s at least a chance it won’t be identical.

You may be, as I was, wondering why Audi chose such an unusual production number. The answer is they did the same thing with the first gen R8 GT back in 2010 – 333 units worldwide. When it comes to the R8, odd-numbered production runs aren’t unexpected. Recall, the rear-wheel series (RWS) from 2018, where 999, not 1,000, were built.

At any rate, the R8 GT is back, and it is a stone-cold banger of ultimate Four Rings performance. Rear-wheel drive only, 612-horsepower V10 – the most powerful rear-wheel street-legal car the marque has ever built – big rear wing, numbered console plate, and unique chassis tuning. All the special edition stuff you’d be expecting, in other words.

I know what you may be thinking, and no, Audi did not confirm this model signals the end of the R8 after two glorious generations and 15 years of continuous production. Special editions like this one usually means production is winding down, but the R8’s end has not arrived, at least not yet. 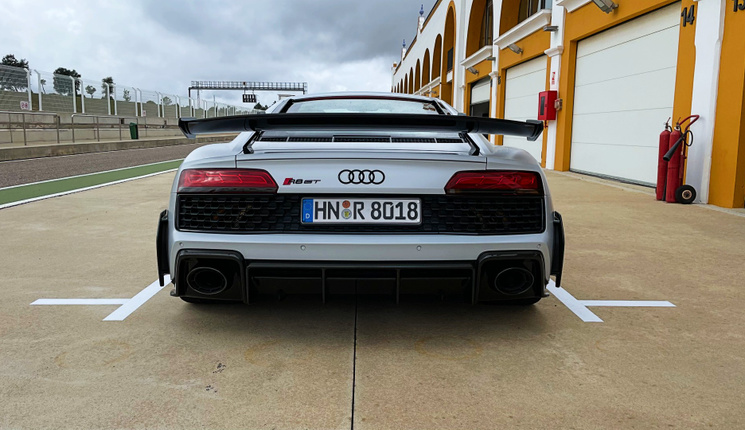 Pricing from Audi Canada is not yet available, but it’s going to be high – likely more than $250,000, but after piloting one in anger around Circuito Monteblanco, a challenging flat track located about 45 minutes due west of Seville, I think it’ll be worth every penny. But I’ll get to that.

First, a little need to know for the R8 GT and how it differs from non-GT models. Power from the naturally aspirated V10 engine is up to 612 hp / 417 lb-ft. over the 602 / 413 output for the V10 Performance quattro (AWD) model, and the seven-speed S tronic dual-clutch automatic transmission has new gear ratios for faster shifting and quicker acceleration. These changes work out to 0-100 km/h in 3.4 seconds, 0-200 km/h in 10.1 seconds, and a top speed of 320 km/h. 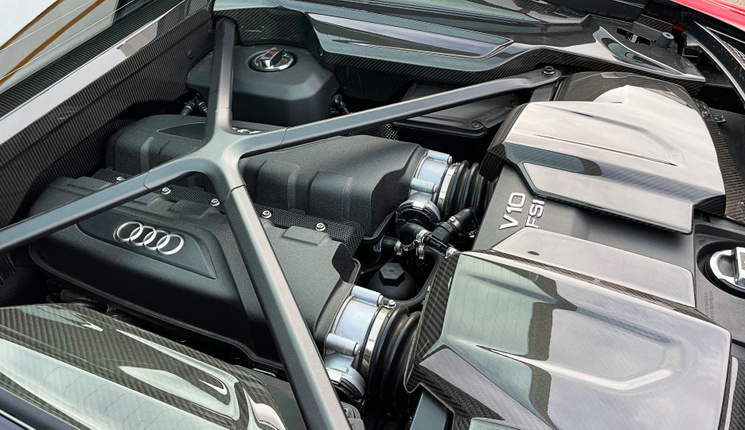 As for special chassis tuning, the R8 GT comes outfitted with a slew of track-focused bits, such as a front anti-roll bar made from carbon fibre reinforced plastic with red anodized aluminum connectors at each end for improved strength, better cornering, and weight reduction. Other standard items include front and rear ceramic brakes, unique black 20-inch 10-spoke wheels wrapped in Michelin Pilot Sport Cup 2 summer rubber. The Michelins are staggered with 245/30s up front and 305/20s at the rear. The GT is about 20 kg (44 pounds) lighter versus the V10 Performance RWD.

Another exclusive GT feature is Torque Rear mode, which can dial intervention from car’s traction control system up or down to increase or reduce slippage at the rear axle. Part of the GT’s electronic stability control (ESC) system, Torque Rear has seven settings, with one offering the least amount of slippage, while seven is the most tail-happy. 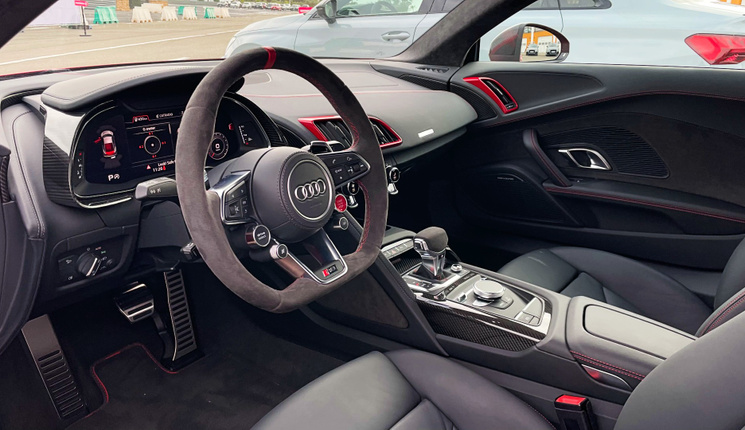 Because the R8 GT is a special edition, Audi is playing up its visual appeal with loads of black. In addition to black wheels, there’s black lettering, badging, and emblems. Even the engine cover is glossy carbon.

A functional, wind tunnel-developed Carbon Aerokit also enhances the GT’s track-ready appearance. The kit includes a front splitter, front fender flicks, side skirts, rear bumper side elements, rear diffuser, and a gooseneck rear wing. While not a race car, the R8 shares about 50 percent of its parts with the GT3 LMS race car, and clearly the R8 GT’s project managers drew inspiration from its racing cousin.

In the cabin, the R8 GT has red and black trim panels, along with red seat belts and a numbered console plate, which pays homage to the first gen 2010 model and is exclusive to the GT. Other details include bucket seats and floormats monogrammed with R8 GT lettering.

As mentioned, the R8 GT is track-ready out of the box, an impression confirmed during my handful of laps behind the wheel at Circuito Monteblanco. The track, which has up to 18 turns and a 4.4-kilometre length depending on configuration, is mostly flat, with a couple of chicanes, tight switchbacks and modest elevation changes thrown in for good measure.

As one might expect, the R8 GT is blindingly fast, with hair-trigger throttle response from the V10 and metronomic shifting from the seven-speed S tronic gearbox. It’s a truly seat-pressing experience, but there’s no fear of flattening the accelerator, as the car has so much mechanical and aero grip for keeping all four corners solidly adhered to the tarmac. 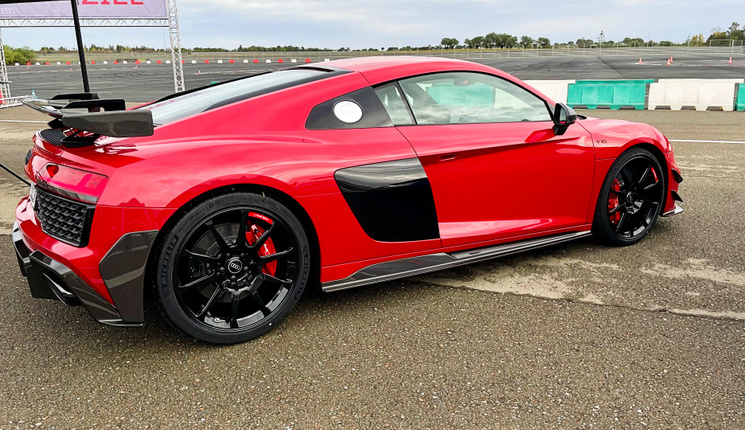 I varied my entry speed into corners, sometimes coming in a little hot to test the response, but the car’s massive ceramic brakes settled things down reliably in short order. Did the rear end feel a little jittery at corner exit under hard acceleration? A bit squirmy at times? Yes, and yes, but that’s the basic nature of a rear wheel-drive car, especially one that’s feeding 600+ horsepower and 400+ lb-ft. of torque through one axle.

I fiddled with the Torque Rear mode during a drifting exercise, which was quite fun, but left it at the lower default setting on track. Reason being, as an Audi engineer explained, is it isn’t designed to gain any handling advantage on track, plus the car’s rear-wheel bias provides all the excitement this driver needs without any extra assistance. 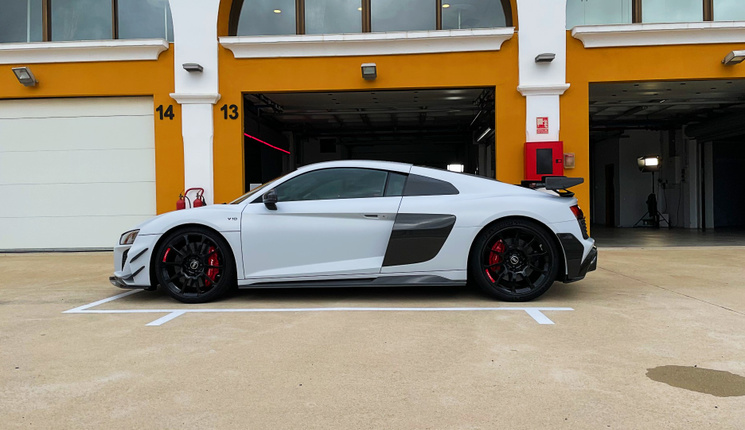 Apart from its sheer track prowess, the R8 GT is also a feast for the senses: the screaming V10 reverberating through my helmet, the downshifting of the S tronic gearbox with its attendant exhaust bap-bap-bap under braking all linger in my memory almost two weeks later. Same goes for its intricate detailing, from its carbon fibre dash inlay to its red seat belts and intricate areo package, which really nail the visual appeal of a special edition.

For those fortunate enough to own one, the R8 GT not only delivers exhilarating performance on track, with visuals to match, but also the cachet of extreme rarity which could be its most valuable asset.

The 2023 Audi R8 GT arrives in the first quarter of next year. Pricing will be announced closer to launch.