Article was updated 5 days ago

Join the Conversation (0)
When Volkswagen added a trunk to the back of the Golf in 1980 and gave rise to the Jetta it was an instant success. For those that preferred a traditional 3-box layout, the Jetta took everything that was great about the Golf and gave it wider appeal.

Today, it’s no secret that sedans are transitioning from mainstream to niche as more and more decide that a crossover is the right choice for their next vehicle purchase. Even VW decided to axe the new Golf (we still get the GTI and Golf R) and instead gave us the Taos, which is sort of a bigger, bloated Golf.

The good news is that if you still want a Jetta for 2022, especially because you miss the Golf, you can get one. And they’ve thrown a bunch of tweaks and even a new engine at it to keep it relevant against a dwindling but strong group of compact sedans that linger in the marketplace. 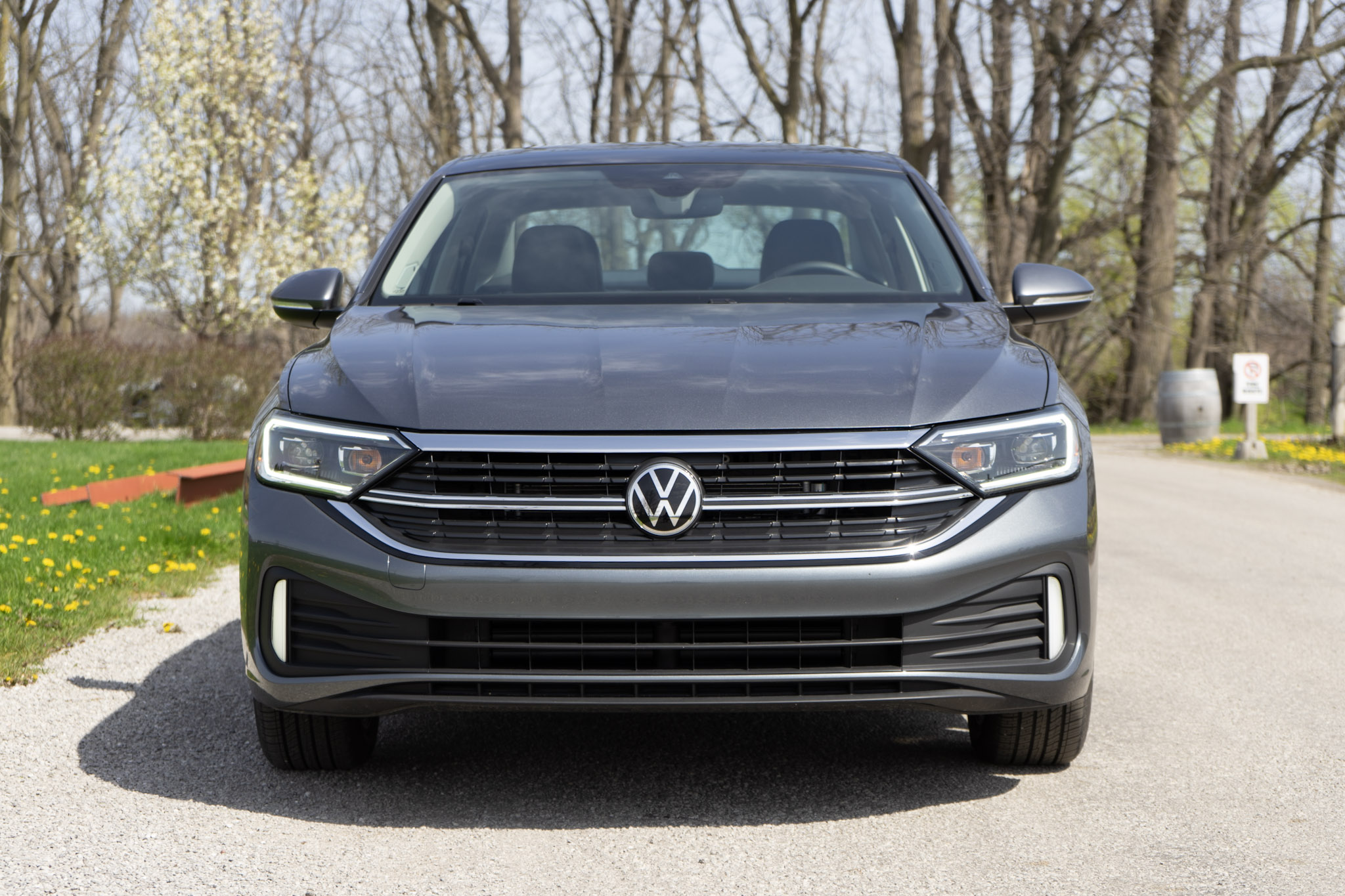 For 2022 the new Jetta gets a revised grille and new bumpers front and rear. There are some new colours and wheels and even a new sport package option to give you some of the hotter GLI’s look without the extra power or cost. The sports pack is unlocked on the mid-grade Comfortline trim and gets you a black grille, mirror caps, and window trim along with a sunroof, black headliner, and unique cloth seats.

About that new engine, it’s a 1.5-L turbocharged 4-cylinder that’s both more powerful and more efficient than the outgoing 1.4. With 158 hp (up by 11hp) and 184 lb-ft of torque from just 1700 rpm this sophisticated unit uses high-pressure fuel injectors, APS coated cylinder liners, and variable vane turbocharger technology, first seeing duty in a Porsche 911 turbo. It means, you guessed it, more power.

For a very reasonable sum of $22,895 you can get a brand new Jetta with that fancy turbo engine and 6 manually operated gears. An 8-speed automatic is extra. 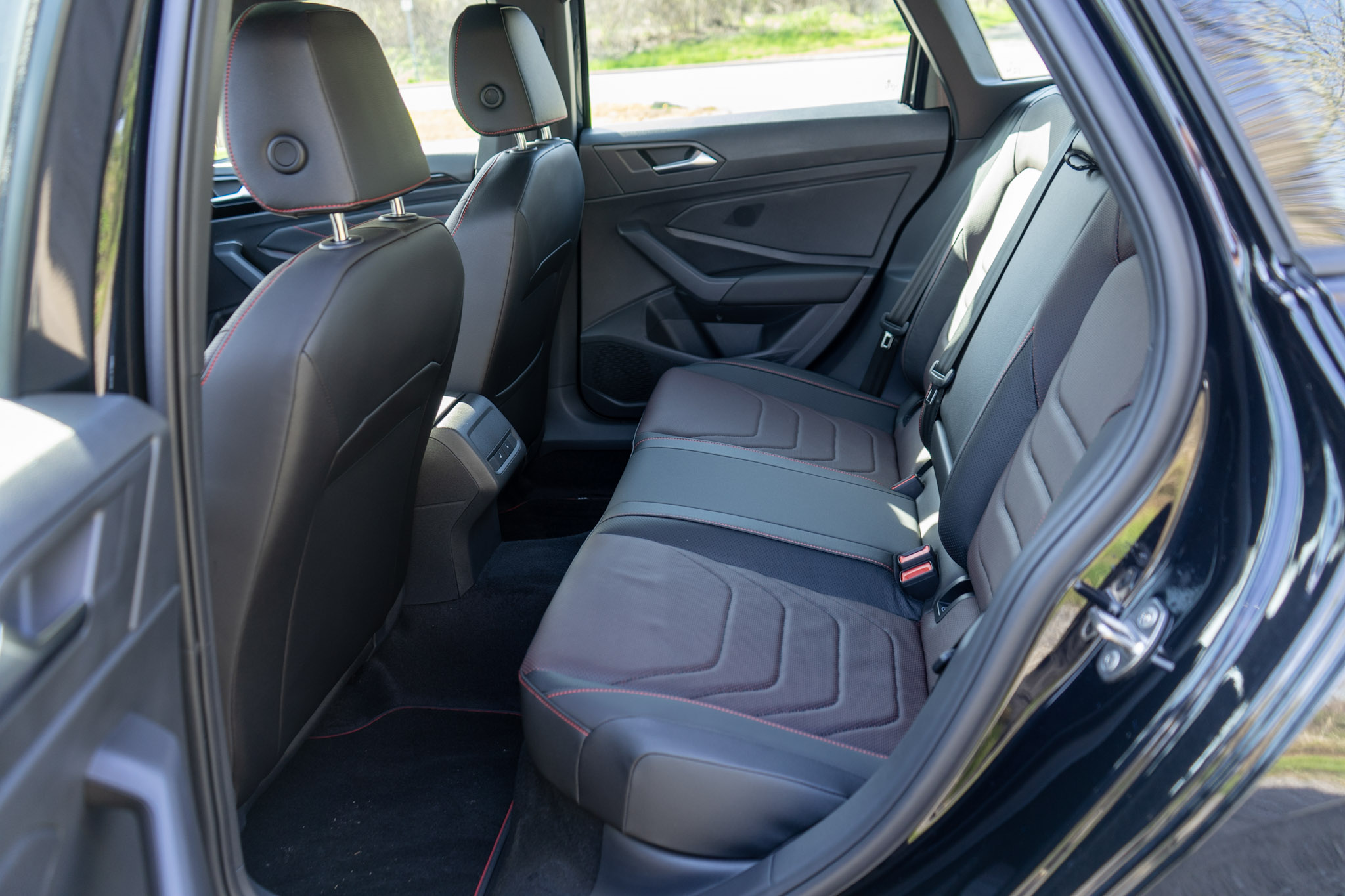 It’s an efficient, well-equipped sedan, with a roomy back seat and a large trunk. On the highway it’s rated to get 5.5L/100km, an amazing figure from something that’s not a hybrid. There are also a few things you wouldn’t expect at this price point, like an 8-inch digital gauge cluster and a heated steering wheel. The Honda Civic, probably the Jetta’s most natural rival is thousands more and isn’t as well equipped. The Toyota Corolla starts at a slightly lower price, same with the Mazda3, but both are less powerful and have much smaller interiors.

You can spend more on a Jetta, but as our pal Matthew Guy and his Base Camp column reminds us every week, those sparkly options might not always afford a better experience. Comfortline trims add wireless Apple Carplay and Android Auto, which is awful convenient as is keyless entry, but I can live without leatherette and even automatic climate control. 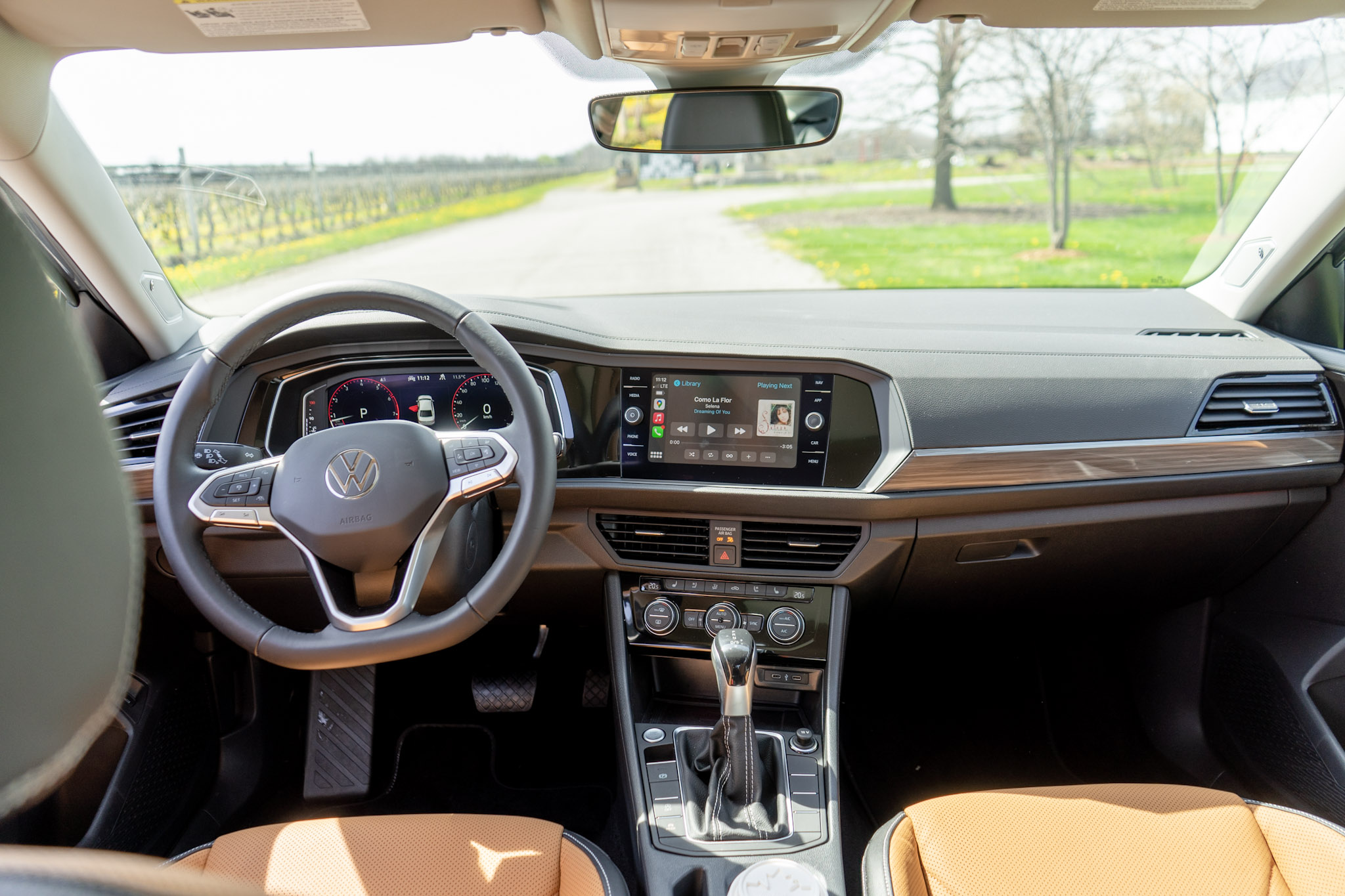 The automatic-only Highline I drove briefly through wealthy neighbourhoods straddling the Niagara River had real leather in a rather swanky natural brown colour, a Beats audio sound system, and ventilated seats among other things. The Beats system might be better than the base audio but it isn’t anything to write home about.

The driving experience is much like it is in the 2021 Jetta. I can’t tell you if I felt those extra 11 horses from the new engine, but it’s quiet and there’s more than enough torque for passing slower cars and merging and all that. And, yes, it’s efficient even with my enthusiastic driving. I might not have seen 5s, but I wasn’t on the highway for very long and I was quite generous with gas pedal usage.

The ride is soft but controlled and the steering is light but firms up nicely at speed. It’s a pleasant experience but not the sports sedan you might have been hoping for. That’s what the GLI is for. 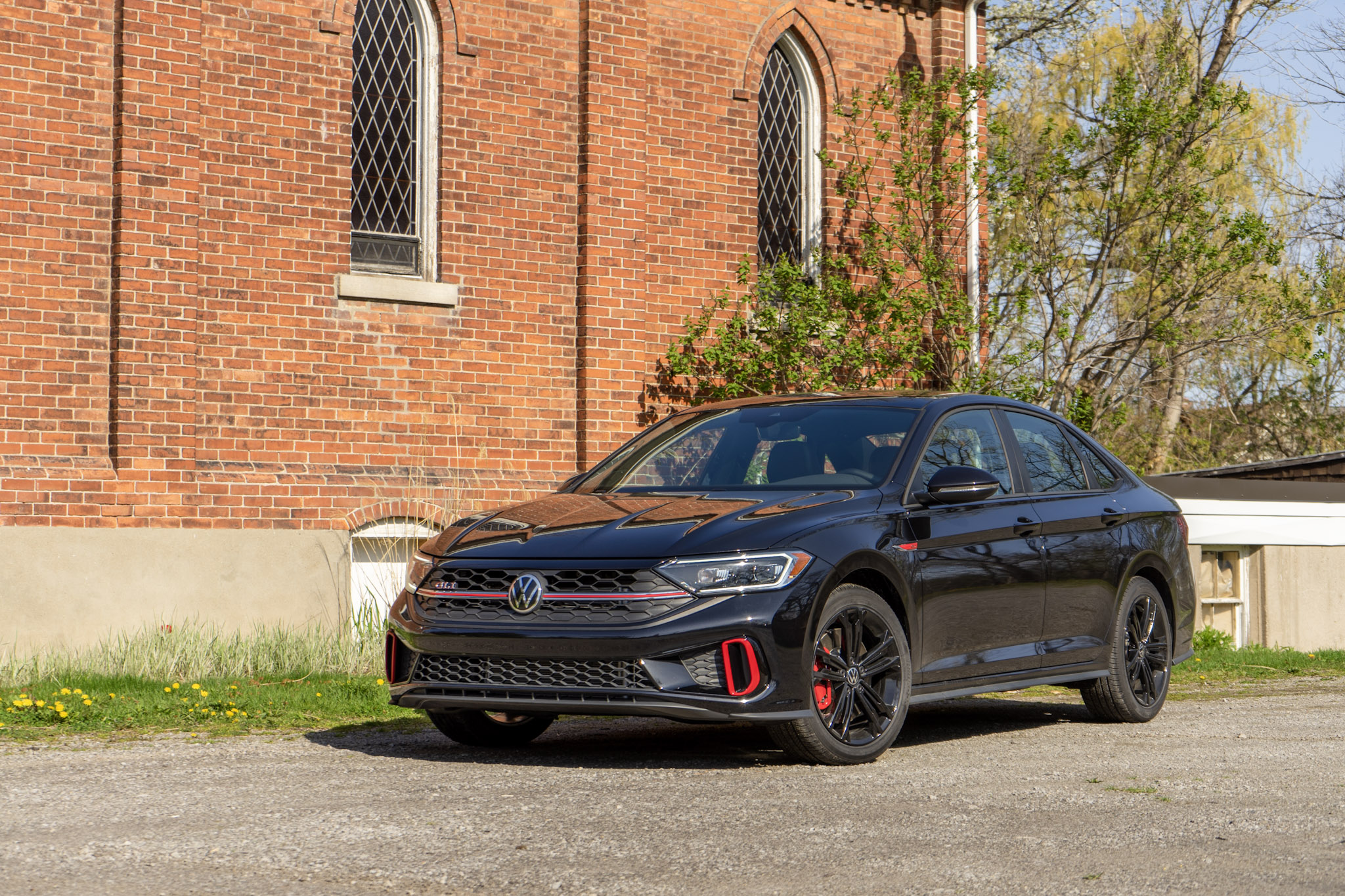 The GLI is also refreshed for 2022 but it doesn’t get a new engine, not that it needed one in the first place. The 228 hp EA888 direct-injected and turbocharged 2-litre 4-cylinder is still a peach, and with 258 lb-ft of torque, it feels just as stout as it ever has.

The Mazda3 with the optional turbo engine has more power but it’s significantly more expensive and doesn’t come with a manual. It’s also chasing a more upscale buyer. The GLI is an enthusiast special meaning that it’s an ordinary sedan with a powerful engine, three pedals in the driver’s footwell, and a sportier suspension thrown in for fun. Ok, so it’s more sophisticated than that, it is German after all, but you get what I’m on about.

The optional 7-speed dual-clutch automatic is easily the best automatic at this price point but if you want the most driving engagement stick with the 6-speed manual. The gearbox has light throws and is a bit video-gamey but clutch engagement is spot on and you really get the feeling that you’re extracting every last ounce of power out of that eager motor. 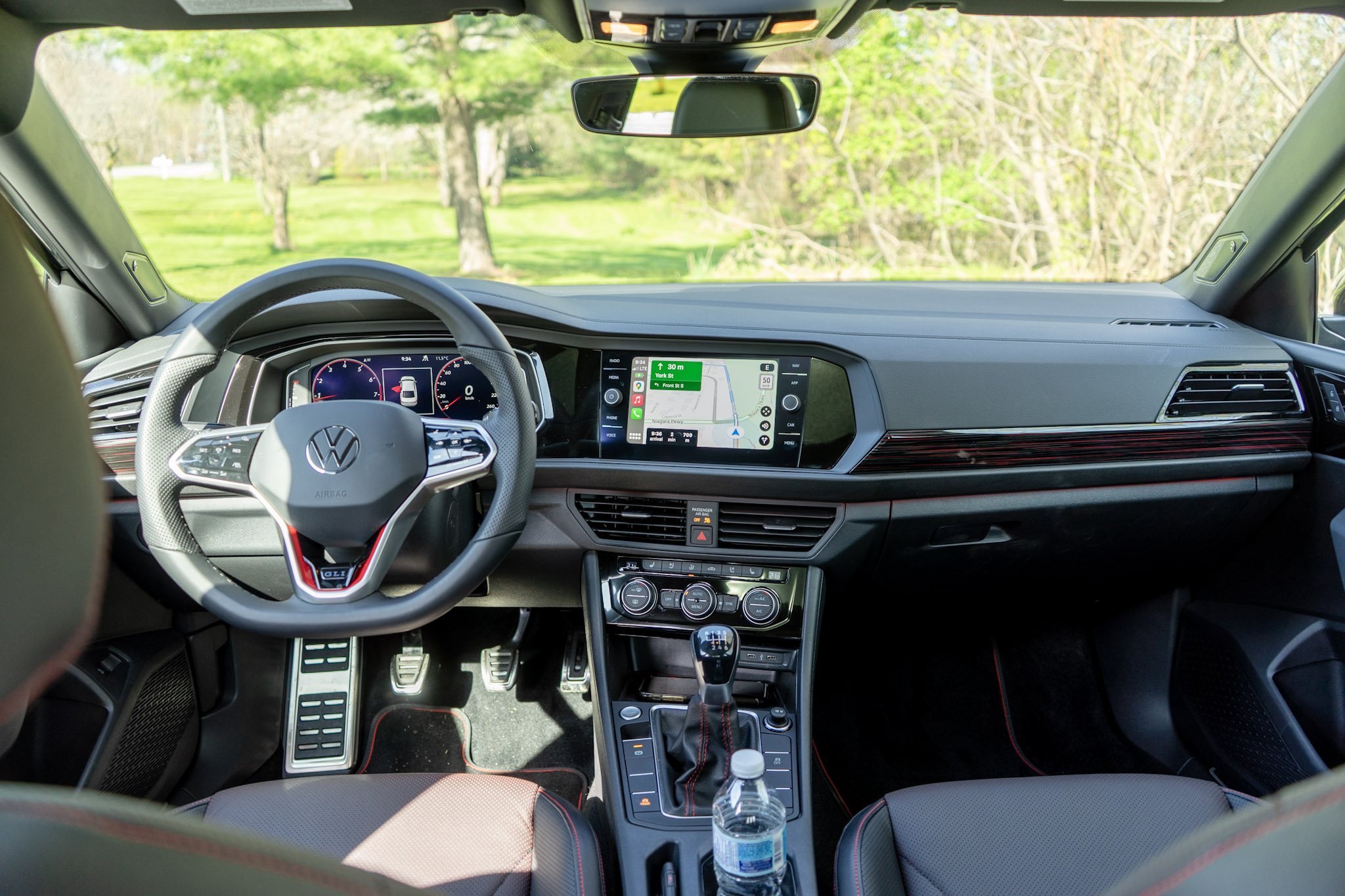 GLIs are fully loaded and there are no options to add. They also come with adaptive dampers, a limited-slip differential, and larger front brakes nicked from the last-gen Golf R, and this year it gets a new sport exhaust adding a much needed bit of throatiness under power. There’s that value proposition again, because for $31, 895 this is a bargain for the power, refinement, and driving experience you get.

The GLI is a stiffer car overall, but with its independent rear suspension and those adaptive dampers set to comfort, it’s almost cushier than the base Jetta. It’s also more fun in the corners and puts its power to the ground with minimal fuss. The engine sounds great and it pulls hard all the time. A new Civic Si costs more and could only wish for as much torque. 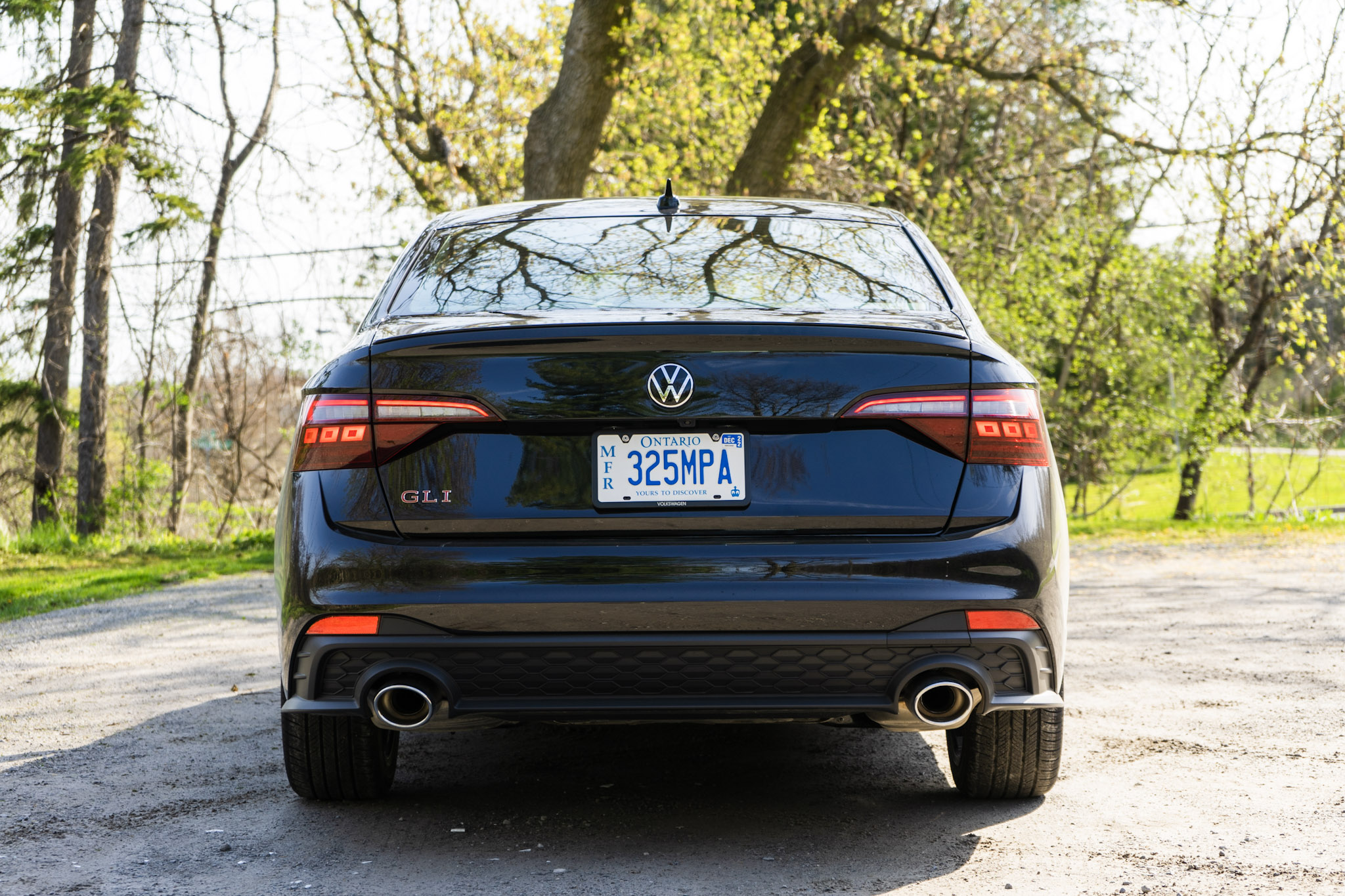 There’s still fake engine noise, but you can hear the added grit from the new exhaust system, especially with the windows down. It still isn’t what you would call loud and it still isn’t going to offend anyone, a good or a bad thing depending on whom you talk to.

Like everything else on the Jetta, the volume from those new pipes seems perfectly calculated, like it’s all part of a complicated formula. It’s predictable and very German and there’s an obvious lack of drama to be found anywhere inside or out. This can be construed as boring but buying a new Jetta means you’ve made a sound and economical purchase and you've left the primitive part of your brain out of the decision making process. And that’s probably for the best.

The 2022 VW Jetta has been polished to a mirror shine and it’s an easy recommendation for anyone that wants a fun, value-packed vehicle that’s not a crossover. The GLI is my pick because it packs in a lot of content and performance for a very reasonable sum of money. Both are on sale now.