Emits Nothing But Water.

Join the Conversation (0)
The 2022 Toyota Mirai hydrogen fuel cell electric vehicle has gone decidedly upmarket, providing a cab-rearward stance and a new front fascia punctuated by aggressive hawk-like headlight lenses. The rear end is a little softer, but it is futuristic…just in a classier way. The Mirai now looks less like the psychedelic trip that is the old Mirai and more like the Lexus LS sedan with which it shares its TNGA-L platform.

Inside, it isn’t quite so ultra modern, thanks in no small part to the fact that while at 12.3-inches the central display isn’t small, it makes do with Toyota’s older infotainment interface, which has since been replaced in most models and not a moment too soon. The graphics aren’t that sharp, the colour palette is muted and it just isn’t all that fast or intuitive. At least it functions as a touchscreen display, saving users from having to rely on a joystick or – shudder – a touchpad. 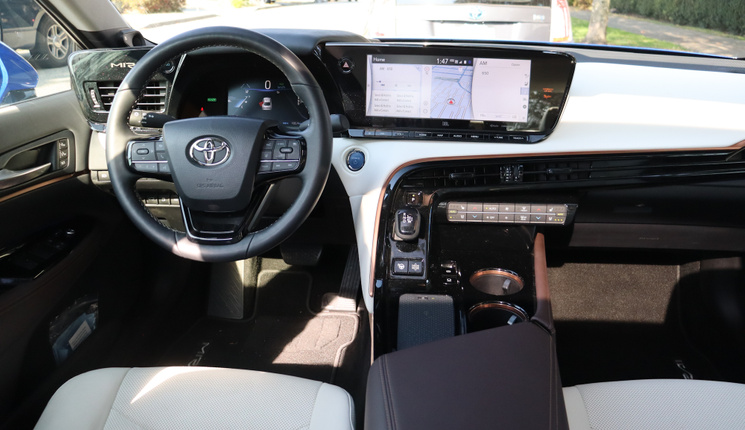 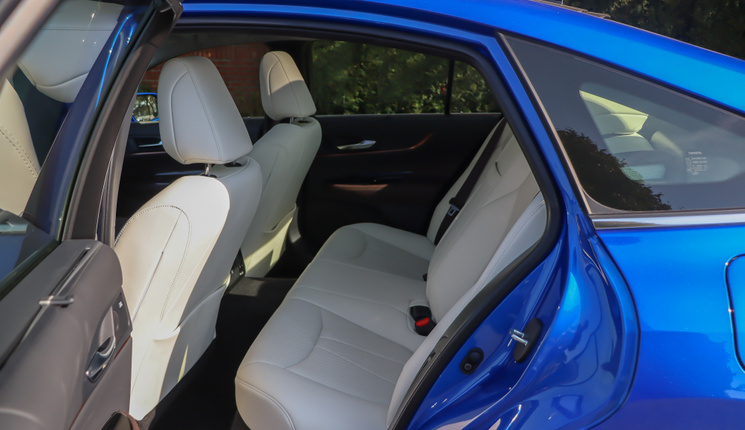 You do, however, get a wireless charge pad, Apple CarPlay and Android Auto, standard 14-speaker JBL audio on both the XLE and Limited models (my tester was the latter), heated front seats (upgraded to heated and cooled on the Limited, which also gets heated rear seats), 8-way power driver’s seat, synthetic leather seating as well as a power heated steering wheel. It’s fully featured and this side of slightly more adjustable seats, it’s hard to expect much more at the sub-$55,000 price level. Unfortunately, upgrading to Limited spec will take you over 76 grand in Canada and while you do get niceties like a digital rear-view mirror, heads-up display and 20” wheels as opposed to the 19s seen on the XLE, that seems like a big price jump considering there are no mechanical differences between the two.

The infotainment display is one thing, but the other gripe I have with the Mirai is that big as it is, and even with all that presence, it’s just not that big inside. Though they’ve rearranged the alignment of the hydrogen storage tanks to carve out more space, they’ve also added a third tank and there is no pass-through door to the trunk so you can forget about hauling longer items. The back seats are snug for such a large vehicle and the front seats are comfortable and spacious enough, but you do have to contend with an enormous centre console. Now, they’ve put that space to good use with the charge pad, two cupholders, a tiny little dongle for a shift lever reminiscent of what’s seen in the Prius and a wide (if not that deep) storage bin, but you will feel…ensconced. This is one of the main issues when it comes to hydrogen power; you need to find a place to store all that hydrogen and you can only compress it so far without it becoming too unstable. 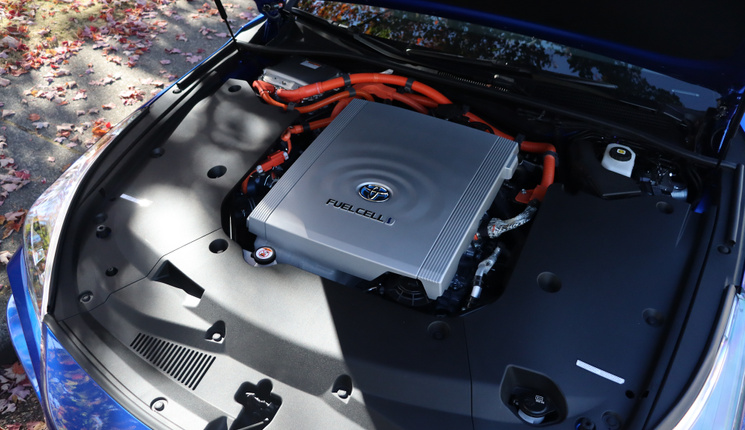 Toyota has, however, taken steps to further increase the safety of the Mirai’s fuel system by developing thinner-walled but stronger hydrogen fuel tanks, crafted from carbon-fibre reinforced plastic adding just that much more peace of mind.

Powertrain-wise, what we have here is a hydrogen fuel cell stack supplying electricity to an EV motor that drives the rear wheels through a 1-speed direct-drive transmission to the tune of 182 horsepower and 221 pound-feet of torque.

On paper the acceleration is modest, taking about 10 seconds to get from 0-100 km/h, but here’s the thing: the Mirai drives like an EV – well, it is an EV – meaning quick throttle response with no delay as we wait for the transmission and motors to get on the same page. So it feels much faster than the numbers suggest and most of all, it feels smoother. The Mirai is big, heavy car at almost 2,000 kilos, but the suspension has been tuned for both, a great ride, and the ability to move through corners without feeling too much like a porker, helped along by the RWD powertrain. It will even give you some fake engine sounds if you want but these sound kind of cheap, so I switched them off.

Toyota claims 602 km on a full tank of hydrogen for the Limited, but I never saw more than 450 on a fill in pretty mild temperatures. Of course, we have to keep in mind that I was not the first driver of this vehicle and there is a memory so like all EVs, that’s an estimate based on prior learning. After my ranged drive, however, I had driven 10 km less range than predicted. That’s not a huge deviation, but it is too bad about the max range I was able to achieve. 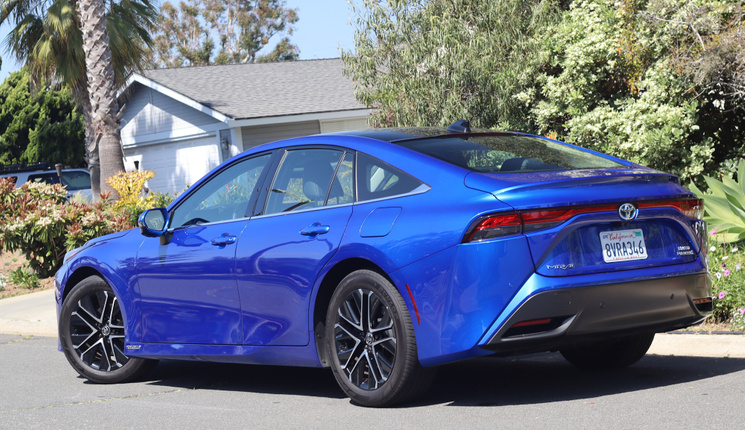 At least I was able to earn that back quickly, however. Filling up with hydrogen takes about as long as it does to fill a tank of gas, and it’s all done in a similar fashion; In Vancouver, where I live, you pull up to one of the handful of gas stations that offer the service just as you would any gas pump. You swipe your card, punch in your email for a receipt and start to fill. You don’t even have to keep a hand on the nozzle; it locks itself in, and that’s that. Half a tank cost me about $33 and at the time, that was around $10 less than it would have cost me to fill half a tank on a gas car of similar size to the Mirai.

Which, I guess, is really where hydrogen power comes into its own. Many are asking “why not just go full-EV?” and that’s a fair point, but the amount of time saved over a BEV when it comes to filling – even with home charging – will be an attraction to some. As will the fact that the only emission produced while driving is…water.

Having to deal with a limited fill network (which will be growing; Quebec and BC have hydrogen fill stations and Ontario is about to get on board) is another thing, however, and that continues to be a big stumbling block for this segment. If hydrogen does catch, though, Toyota’s got quite a hat in the ring with the Mirai.