Join the Conversation (0)
I realize and accept that electrification is the future of the auto industry. We’re crossing the Rubicon and we’re not turning back. It’s not a matter of ‘if’ anymore, but when.

Having driven a bunch of EVs over the past year, I mostly welcome their growing numbers. Their benefits are obvious, and I’m convinced the teething problems (range, cost, charging infrastructure) associated with their mass adoption will be solved in time.

But, as I was reminded in Kingston last week, sometimes there’s no substitute for a rip-snortin’, turbocharged, AWD gravel-tosser that runs on dead dinosaur juice. If you just want to feel alive, these cars are the true magic elixir. This is what I felt while flinging the 2022 WRX over what some referred to as ‘soft roads’ (dirt, gravel and mud) in the hinterland north of Kingston. But I’ll get to that. 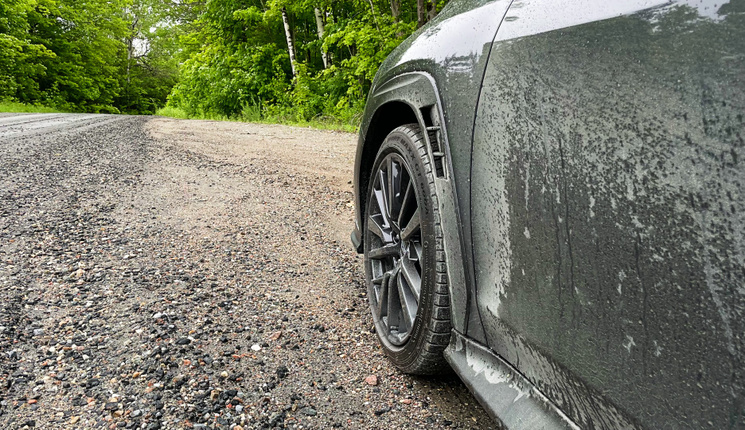 I’ll begin by confirming that the range topping STI is dead. When I reviewed the outgoing 2021 STI last fall I was convinced a next-gen model was coming, but it was not to be.

Why? Electrification. A Subaru Canada rep told me in Kingston that the STI nameplate isn’t necessarily dead, but a purely gas-powered version is. Does this mean an STI EV is in our future? Maybe.

As for the present, the 2022 WRX is the second stand-alone generation and fifth gen overall if the Impreza-based models are included. Unlike the previous model, the new VB gen is built on the Subaru Global Platform.

The new car benefits from platform enhancements that have produced the stiffest and strongest body structure to date. Torsional rigidity for the 2022 WRX is up 28 percent compared to the outgoing VA model, while front lateral flexural rigidity is up 14 percent. The ’22 also benefits from the use of more structural adhesive and cross-section foam for reduced cabin noise.

Suspension changes include revised geometry for better handling on rough roads. Elsewhere, the rear stabilizer is mounted directly to the body for better stability and ride comfort, with reduced body roll, noise, vibration, and harshness. 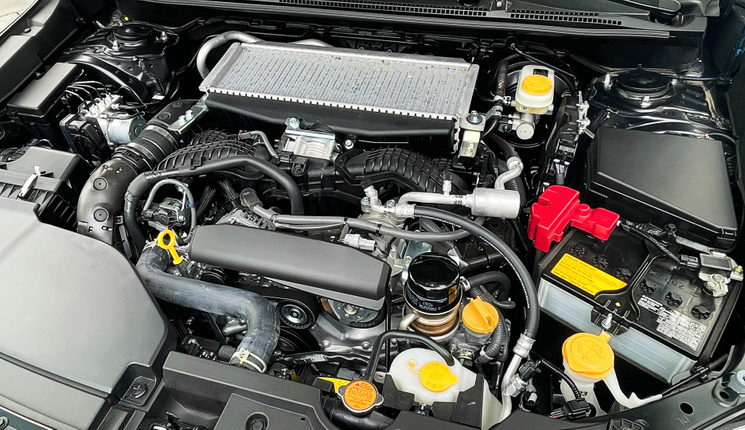 As for the engine, the 2.0-litre turbocharged horizontally opposed four-cylinder has been replaced by a bigger 2.4-litre turbocharged horizontally opposed four-cylinder, but overall output hasn’t changed much. The 2.4 provides a small bump to 271 horsepower (up from 268), while torque remains the same at 258 lb-ft. Subaru claims a flatter torque curve for the 2.4 but based on their own data, peak torque arrives at the same point (2,000 rpm) in the rev range for both engines and has the same top-end figure (5,200 rpm).

In terms of transmissions, there are two: a six-speed manual with improved gear machining and optimized ratios, and a new CVT known as the Subaru Performance Transmission (SPT). The SPT offers variable torque distribution through the centre differential, shifting the front / rear torque split from 45 / 55 in normal conditions to 50 / 50 in bad weather or when road conditions deteriorate. Subaru also claims the SPT has 30 percent faster upshifts and 50 percent faster downshifts than the old CVT. 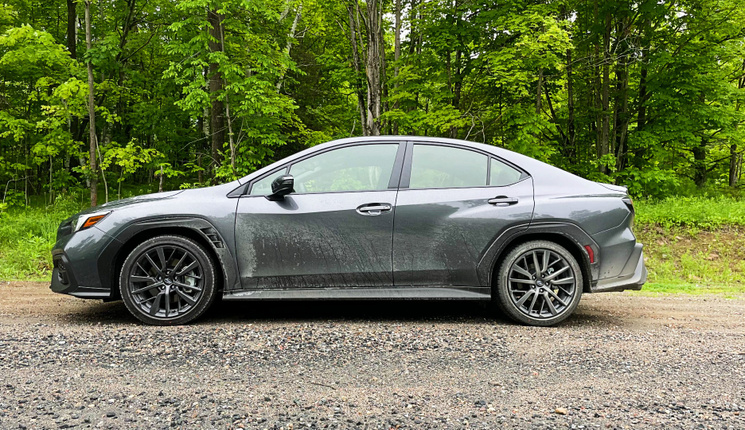 From a design standpoint, the WRX bears a strong resemblance to the VIZIV Performance Concept Subaru unveiled in 2017. The production car’s shape isn’t quite as sleek and dramatic as the concept, but some elements, such as the front grille / headlight / air intake design, are like those of the concept.

On the inside, the new WRX sports a revised interior with more shoulder room between occupants in both front and rear seats, along with a redesigned centre console and a new infotainment system.

As for spaciousness and comfort, the longer wheelbase (+25 mm), has created more space for rear seat passengers while redesigned seats deliver better comfort for both normal and performance driving situations. The multimedia system has also been overhauled, with an 11.6-inch vertical display found in other Subarus now available as an option for the WRX. The standard set-up is a dual seven-inch display with wired Apple CarPlay and Android Auto standard on both systems. 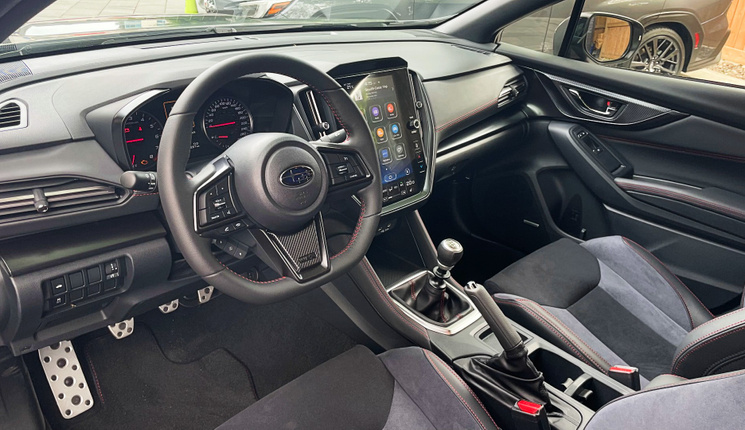 With that out of the way, it’s time to answer the most important question— what is the WRX like to drive?

The drive route Subaru took our assembled group of auto journos on featured a lot of rough, two-lane country roads (several of which are in desperate need of repair) and undulating dirt and gravel roads.

I’ll cut to the chase – this car is made for the loose stuff. But it’s fine on tarmac, too – rotates nicely through corners, with responsive steering, positive weight balance and good mid-range acceleration thanks to lots of useable torque—what you’d expect from a WRX, in other words.

But it’s a whole other game once you turn off bumpy county asphalt and onto a combination of loose gravel and hard-packed dirt and mud. These “soft-roads” is where, if you’re not careful, you’ll start thinking you’re in a rally stage in a WRC event!

I resisted the urge to go full Colin McRae but did manage to swing the rear out a few times while taking a few sweeping turns and matting the throttle after a brief stop or two before gathering it back up. In this environment, which included blasting through a few large puddles because it rained heavily during the drive, the WRX delivers the most joy. 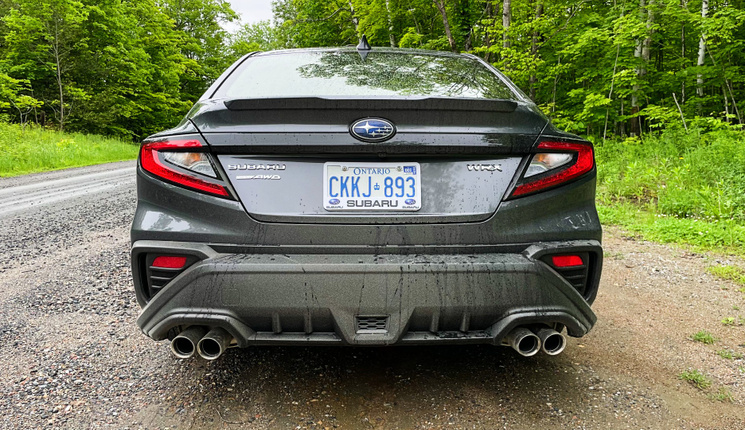 The exhaust penetrates the cabin just enough, the supportive seats hold the driver just right, and the clutch and shifter make precision up or downshifting a breeze. Honestly, most of the dirt roads were set it and forget it in third gear, so I didn’t need to shift all that much, but it worked well when I did. As for traction on loose surfaces in wet conditions, my tester’s grip level felt consistently good throughout. Certainly, trouble awaits if pushed too hard, but if one drives to the conditions, the WRX’s handling is secure.

So that’s the manual. I also drove a SPT-equipped model in a short 30-minute loop around Kingston. The car felt quick, and the transmission is more responsive than other Subaru CVTs I’ve experienced.

The 2022 WRX is an impressive machine. It’s not much more powerful than its predecessor, nor does its looks set one’s heart ablaze, and there’s no STI. But taken together, the many improvements Subaru have made make for a more compelling package overall, and with a pricing structure that’s still a performance car bargain.

Bottom line, this is likely the last pure gas-powered WRX. We should enjoy it while it lasts.